Posted on September 23, 2020 by laststandonzombieisland 3 comments

Here we see the Archimede-class diesel-electric submarine, Galileo Galilei (SS90) of the Regia Marina, at Aden in 1940, after the Italian boat mixed it up with a plucky British trawler. A heroically fought warship (note the shell hole in her busted sail), she went on to work to have a curious third (yes, third) life.

The Italian Navy sometimes gets a lot of rocks thrown at it for the fleet’s overall performance in the two world wars but make no mistake, the force was competent when it came to undersea warfare. Italy had a robust domestic sub-building capability and throughout the first few decades of the 20th Century supplied boats to customers not only in Europe but in the Americas as well. Then, of course, they also fielded working midget subs and frogman-driven human torpedoes, which were used with great skill.

The four boats of the class– Archimede, Galileo Ferraris, Galileo Galilei, and Evangelista Torricelli— were all built by Franco Tosi at Taranto in the early 1930s and named for famous men of science who, more often than not, were accomplished in the field of astronomy.

Launch of RIN Galileo Galilei in Taranto 19 March 1934 via http://www.naviearmatori.net/

Updated versions of the previous Settembrini-class, the Archimedes went some 1,200-tons when submerged. They were classic Mediterranean boats, just 231-feet in length. Speedy, they could make 17-knots on the surface and they had long legs, capable of a 10,000 nm range. Armament was a pair of 3.9-inch deck guns and eight torpedo tubes, four each in the bow and stern of the boat.

The focus of our tale, Galileo Galilei, commissioned 16 October 1934. However, her time in peacetime service was limited as she was soon to fly a black flag of sorts.

After being used in 1936 in a form of “underwater piracy” fighting a semi-secret war against socialist Republican Spain during the Spanish Civil War as Sottomarini Legionari (Submariners Legion) allies to the fascist Nationalists, the Italian Navy officially sold two of their submarines directly to Franco’s government in 1937 and loaned four others. This was mainly because the Republican Almirante Cervera-class light cruiser Miguel de Cervantes caught two torpedoes from sistership Torricelli that November while anchored off the port of Cartagena but survived, and, when she was repaired, was found to have fragments in her hull from said fish with Italian markings.

Fighting for Franco was lackluster, and the Italian-manned boats bagged several small steamers but failed to repeat the success seen against Miguel de Cervantes–although Iride did fire a torpedo at the British H-class destroyer HMS Havock, who she mistook for a Republican tin can and received a 9-hour depth charge attack for her misidentification.

With that, the four returned to Italy in February 1938, their Spanish Navy service over. Archimede/General Mola and Torricelli/General Sanjurjo would remain behind, the property of Franco’s government, which very much wanted to keep them as those two units had accounted for a variety of fairly important merchantmen during the Civil War.

Back in the spaghetti

With half their class still under a Spanish flag, the two Galileos (Galileo Ferraris and Galileo Galilei) resumed their Italian service including their old names and pennants on Rome’s naval list. When the Axis country entered the war against France and Great Britain on 10 June 1940, some 10 months after the conflict kicked off, Galileo Galilei was part of Italy’s doomed Red Sea Flotilla. Based along the coast of Italian Somaliland and Eritrea, it consisted of a handful of destroyers, subs, and torpedo boats, and were no match for a British squadron, but they could close off the Suez Canal to merchant traffic.

Just hours after receiving word that a state of war existed between Italy and the Allies, Galileo Galilei, part of the LXXXI Squadriglia Sommergibili out of Massawa, undertook her inaugural WWII patrol under the command of Capitano di Corvetta Corrado Nardi and promptly came across the Norwegian-flagged James Stove (8,215 tons) under British charter to the Anglo Saxon Petroleum Company, off Djibouti, sending the enemy tanker to the bottom with three torpedoes on the 16th. Nardi had stopped the vessel on the surface and allowed her crew to board lifeboats before letting his fish fly, the very application of the cruiser rules. A British report on the incident had the Norwegian skipper relay that Nardi “spoke courteously and behaved in the Chief Officer’s words as a ‘Perfect Gentleman’.”

While Galileo Galilei made her escape, some 34 mariners from the James Stove were picked up about an hour later by the 600-ton armed trawler HMT Moonstone (T 90) and landed in the British colonial Aden that same day.

HMT Moonstone underway. Formerly the 151-foot Hull-based cod trawler Lady Madeleine, she could only make 11-knots, but she carried a 4-inch gun, ASDIC listening gear, and depth charges, making her deadly enough. Further, her crew of regulars had been in steady service since August 1939, with Boatswain W.J.H. Moorman, RN, in command. AWM FL 16385.

Two days later, the Italian sub stopped the (then neutral) Yugoslav freighter Drava and, finding no reason to send her to the bottom, let her go about her way. However, Drava reported her interaction with the green-painted Italian sea serpent, and later that night the destroyer HMS Kandahar (F28), along with No. 203 Squadron RAF Blenheims out of Aden, were soon bird-dogging Galilei.

Moonstone soon joined in on the morning of the 19th.

As detailed by Paul Lund in his 1971 work, Harry Tate’s Navy: Trawlers Go to War:

[J]ust before noon, Moonstone’s ASDIC operator reported a strong submarine echo and the trawler immediately steamed to the attack, dropping depth‑charges; but again, the enemy escaped. Then, barely an hour later, the trawler regained contact and dropped more depth‑charges. The explosions had scarcely subsided before the submarine, a big ocean‑going boat, suddenly heaved itself to the surface a mile astern, streaming the Italian flag from a pole above its conning tower.

Moonstone wheeled hard round and steamed full‑ahead with all guns fixing, some of the crew even joining in with rifles as the distance between the two vessels narrowed. Though the submarine, which was fully three times the size of Moonstone, quickly returned fire, the hail of lead and shell from the trawler prevented the Italians from getting to their big gun, and finally, Moonstone’s four‑inch crashed a shell into the conning tower, killing all inside it. Some of the Italians began to wave white clothes in surrender, while others scrambled into the wrecked tower to haul down the flag.

There were far too many Italians for the trawler’s small crew to handle, so after warning the enemy commander not to scuttle or she would reopen fire, Moonstone stood off while Kandahar raced in to take the prisoners aboard and fix a tow to the big submarine, the Galileo Gafflei [sic]…

Kandahar then towed Moonstone’s prize to Aden, where it was warmly received as it was the RN’s first enemy submarine captured in the War. 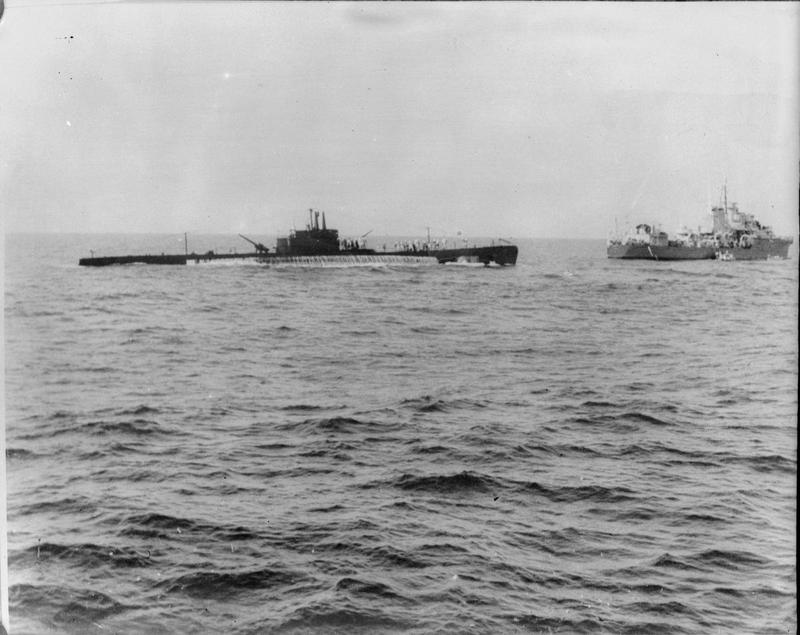 The Royal Navy destroyer HMS Kandahar (F28) preparing to take the Italian submarine, Galileo Galilei, in tow after it was captured in the Gulf of Aden by the trawler HMT MOONSTONE. The submarine’s periscope was spotted, and an attack was made with depth charges which forced it to the surface. The submarine was then captured. IWM A109

Boatswain (later LCDR) Moorman and his XO, Midshipman M.J. Hunter, would receive the DSC for his battle with the Italian sub while PO Frederick Quested, in charge of the 4-inch gun crew that cracked her sail, received the DSM. As for Moonstone, she would survive the war– including operations in the evacuation from Crete– and eventually return to the fishing fleet, ending her days in the 1960s as the trawler Red Lancer.

Nardi and 15 of his crew lay dead after the battle. Their war had lasted nine days. They would not be alone.

During WWII, some 116 Italian submarines sailed against the Allies or supported those that did, chalking up 130 ships sunk for a total of some 700,000 tons of shipping. In exchange, they lost 96 of their submersibles, many with all hands, their hulls cracked on the seafloor. Some 3,000 submariners of the Regina Marina are still on eternal patrol. 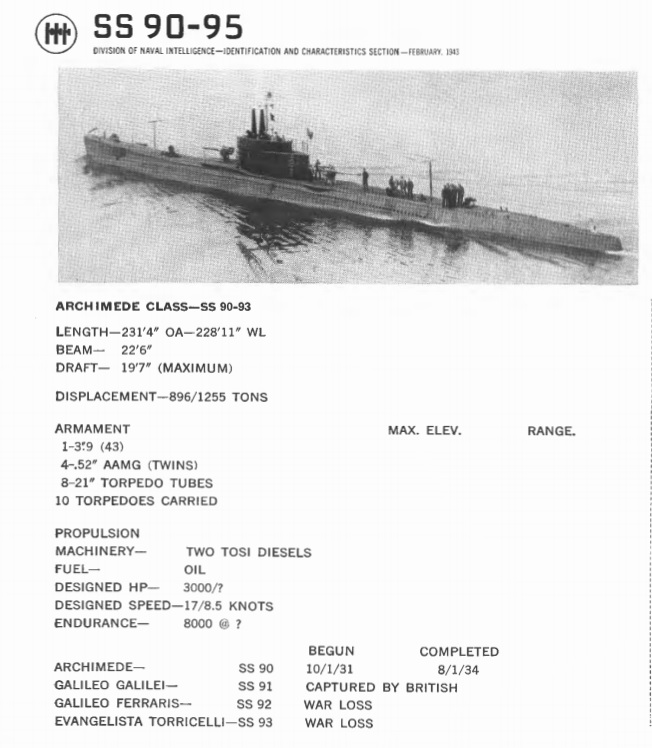 Via the 1943 ONI Guide, confusing Torricelli with the Brin-class submarine that recycled the name

Under the White Duster

Galileo Galilei‘s sole Red Sea patrol had logged just 160 miles on the surface and 35 submerged. However, even with her damaged sail and in reportedly poor material condition (the Italians don’t seem to have overhauled the boat after her Spanish service, as the Norwegian master of the James Stove had reported very foul exhaust and “a cloud of black smoke hung about her all the time she was visible”), the British nonetheless put their prize to as good a use as possible. 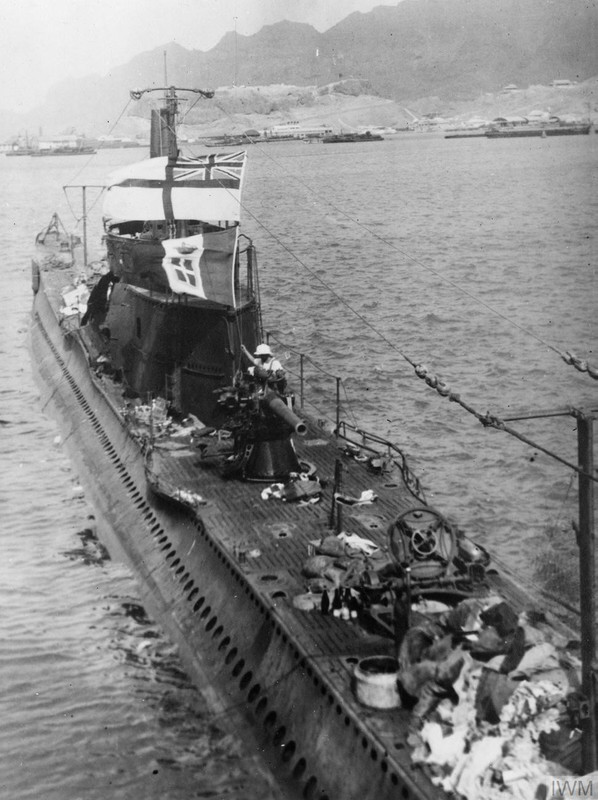 As detailed by Stephen Roskill in his The Secret Capture: U-110 and the Enigma Story:

The prize was a very valuable one and from her we obtained intelligence regarding the disposition of other Italian submarines in the Red Sea and Indian ocean. As a result, we caught and sank the [Brin-class submarine] Torricelli on 23rd June and [her sister] the Galvani, which was patrolling the Persian Gulf to catch our tanker traffic, on the following day…

…In December 1940, Galilei was brought up the Red Sea by a British crew and passed through the Suez Canal to Alexandria, where her hull and equipment were thoroughly inspected. 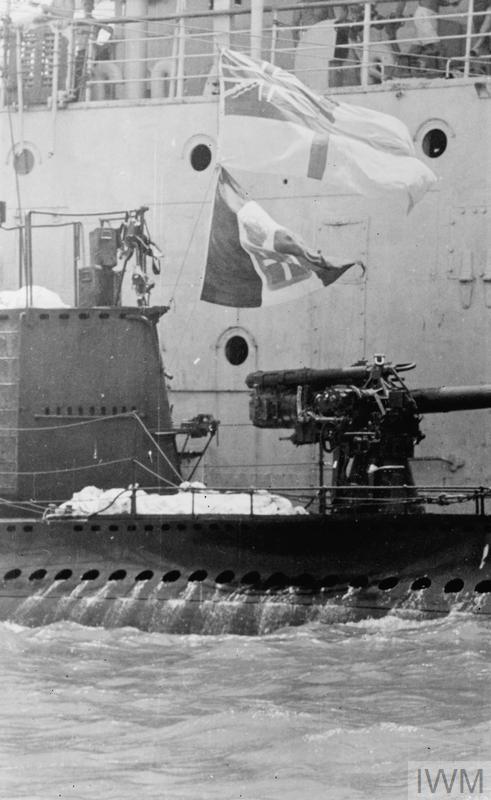 Used for two years as a floating battery charger for HMs submarines at Port Said, the Italian boat was eventually repaired enough to put to sea by June 1942. Christened HMS X.2, then HMS P. 711, she was equipped with British Type 286W radar and Type 129 sonar, then used for training out of Alexandria for the rest of the war.

She was broken up in 1946 without ceremony. Her ship’s motto was “Pur cieco vedo” (While blind I see)

As for Galileo Galilei‘s sisters, Galileo Ferraris was sunk 25 October 1941 off Gibraltar an RAF Catalina with the destroyer HMS Lamerton for the lay-up. Meanwhile, the two units sold to Spain in 1937, Archimede/General Mola and Torricelli/General Sanjurjo, would endure until 1959, far outliving the Regia Marina.

They were still carried in the NATO submarine spotting guide long after WWII. 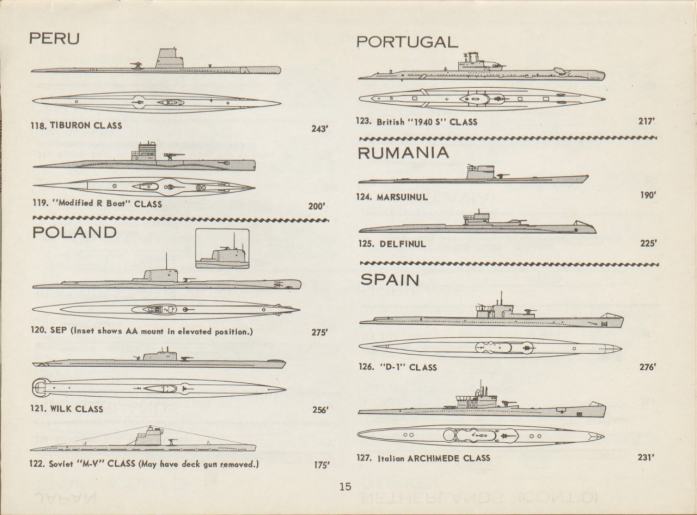 From “The Italian submarines between the two world wars” by Alessandro Turrini – MariStat / UDAP – 1990, for gc Sergio Mariotti