Following the establishment of the Irish Free State in 1922, the six British infantry regiments that recruited there were disbanded, and on 12 June– 100 years ago today– their Colours were laid up at St George’s Hall in Windsor Castle, to be kept forever in the care of the King and his descendants. 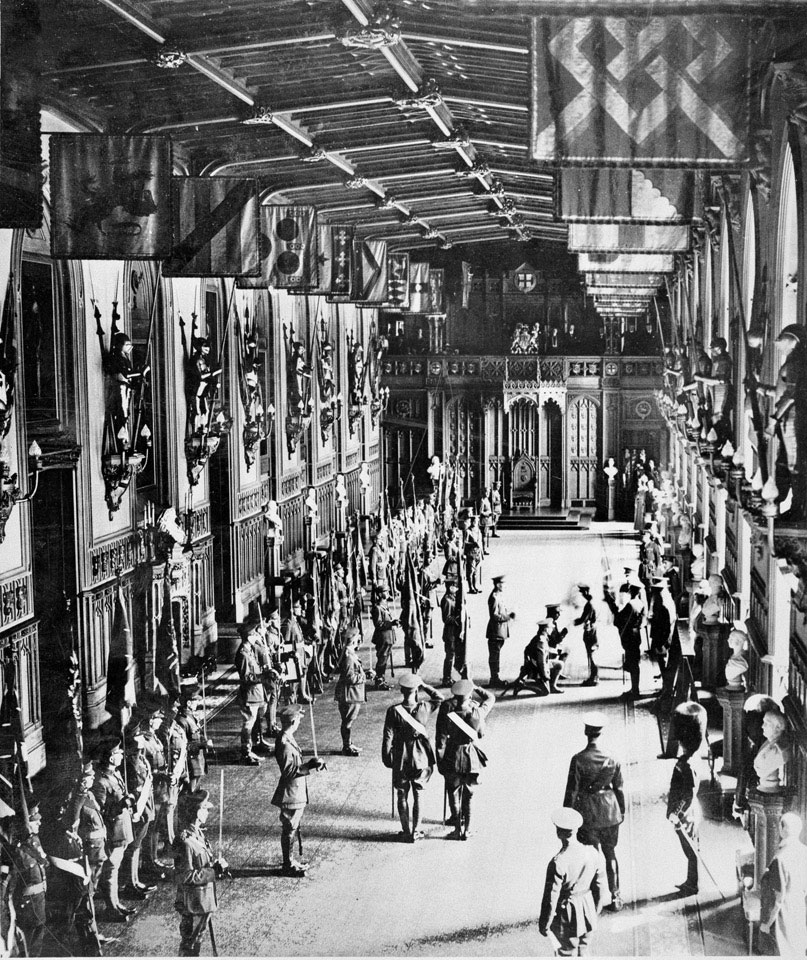 These included the colors of the:

These regiments had been bled white during the Great War just a few years prior. “Estimates of how many Irish men fought in the First World War vary, but it is now generally accepted that around 200,000 soldiers from the island of Ireland served over the course of the war,” notes the IWM. This was up from the 30,000 in service with The Old Contemptibles in 1914. “Historians today tend to use a figure of between 27,000 and 35,000 men killed” when it comes to the numbers of Irishmen left on Great War battlefields.

The “Blue Caps/Old Toughs” of the Royal Dublin Fusiliers, for instance, dated back to the old 102nd and 103rd Foot of 1644 and had over four dozen battle honors on their flag starting with the Battle of Plassey, making them one of the most decorated units in the British Army.

According to The Times the King inspected the representatives of the regiments and then addressed them as such:

We are here today in circumstances which cannot fail to strike a note of sadness in our hearts. No regiment parts with their Colours without feelings of sorrow. A knight in days gone by bore on his shield his coat-of-arms, tokens of valour and worth. Only to death did he surrender them. Your Colours are the records of valorous deeds in war and of the glorious traditions thereby created. You are called upon to part with them today for reasons beyond your control and resistance. By you and your predecessors these Colours have been reverenced and guarded as a sacred trust – which trust you now confide in me.

As your King I am proud to accept this trust. But I fully realise with what grief you relinquish these dearly-prized emblems; and I pledge my word that within these ancient and historic walls your Colours will be treasured, honoured, and protected as hallowed memorials of the glorious deeds of brave and loyal regiments. 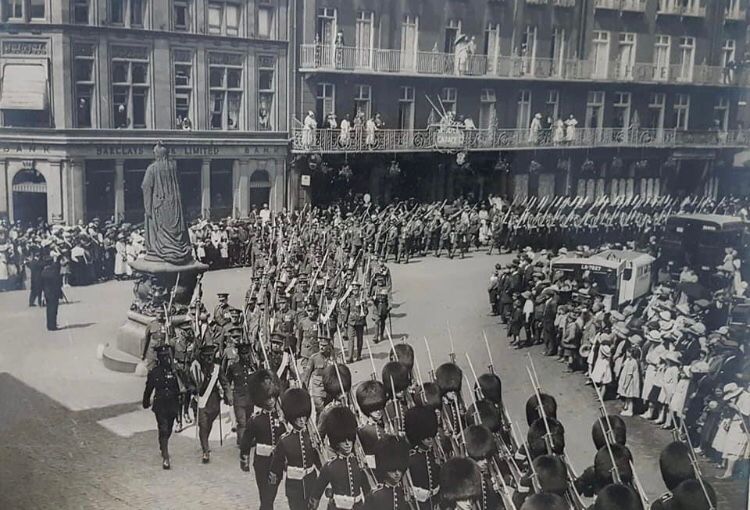 The Queen’s and Regimental Colours of each Battalion were paraded through Windsor and handed to the King for safekeeping after a service at Windsor Castle.

Marching the flags to exile…

Today, the British Army still has the famous “Micks” of the Irish Guards based in London and the Belfast-based Royal Irish Regiment, formed from Northern Ireland, but the old “Southern Irish” flags have largely been kept away for the past 100 years.

The Irish Guards received a number of pieces of silver from each regiment upon disbandment, which are kept in the Officers and Sergeants Messes.