One of the best medium tanks of WWII that made it to the frontlines– and thought by many to be the best German tank of the conflict– the Sd.Kfz. 171/PzKpfw V was better known on both sides simply as the Panther.

Panther tank on display after its capture by the French Resistance. The French captured enough intact Panthers in 1944-45 that at least one post-war unit, 6eme Regiment de Cuirassier, was equipped with them.

Larger and better in just about every metric than the Soviet T-34 or American M4 Sherman (although with a much more complicated suspension system), nearly 3,700 Panthers were produced. Carrying a 75mm KwK 42 L/70 main gun and swathed in 80mm of armor plate at its thickest, it weighed 44 tons but could still make 55kph on its big V12 Maybach diesel.

More on the (original) Panther, courtesy of The Tank Museum, who has one in their inventory, built post-war under British supervision:

With that being said, German defense contractor extraordinaire, Rheinmetall AG, at the Eurosatory 2022 Defense Show on Monday, ended the 57-year sole reign of the Leopard tank by announcing the new KF51 Panther (KF is short for “Kettenfahrzeug“, i.e., tracked vehicle).

The nutshell of the design is that it uses the suspension, powerplant, and chassis of the Leopard 2A7V but comes in lighter, at “just” 59 tons compared to the biggest Leopard’s almost 70-ton mark. Let’s face it, everyone remembers the Maus.

Above the hull and, especially when it comes to the gun system and electronics, the KF51 Panther is all-new, utilizing a 3-man crew with a 20-round autoloader (configurable to four men without), a 130mm smoothbore gun, countermeasures against top-attack, and an all-glass control/surveillance system emphasizing networking (the tank can technically be operated by one, very busy, crewman, as all tasks can be done from each seat). 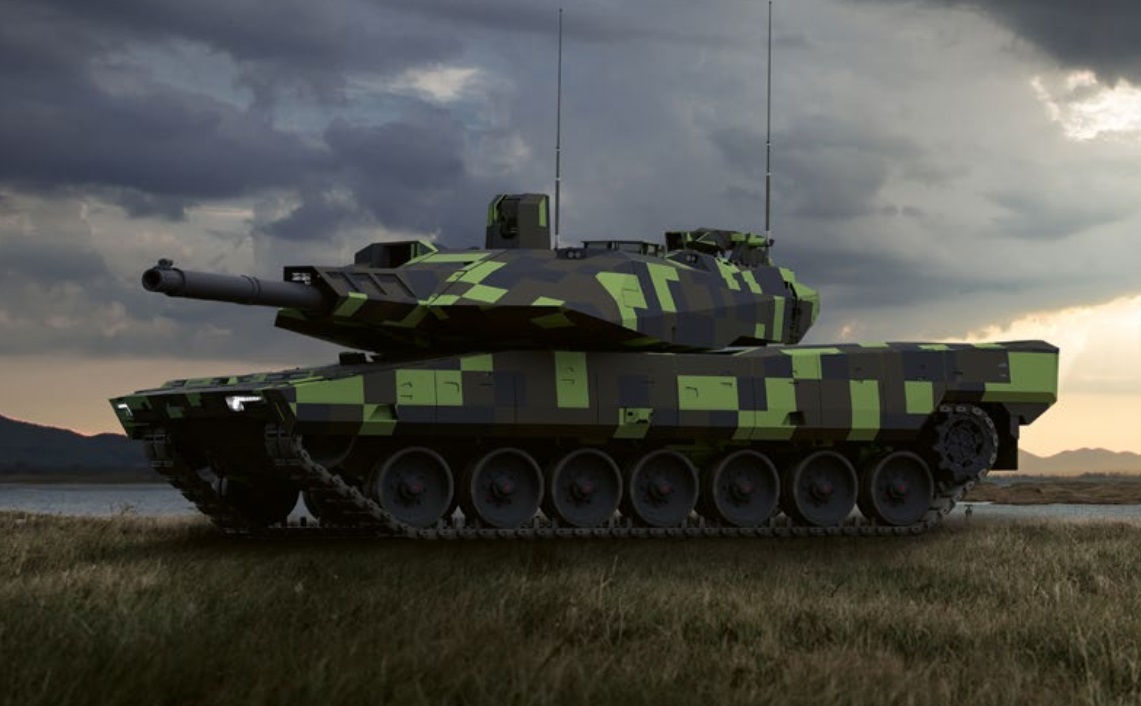 The blurb from Rheinmental’s presser for your digestion:

All weapon systems are connected to the commander’s and gunner’s optics and the fire control computer via the fully digitalized NGVA architecture. This enables both a hunter-killer and a killer-killer function and thus instantaneous target engagement – in the future also supported by artificial intelligence (AI).

Lethality: With its main armament, the 130mm Rheinmetall Future Gun System, the KF51 Panther offers superior firepower against all current and foreseeable mechanized targets. In addition, further armament options are available to provide concentrated firepower for long-range strikes and against multiple targets.

Integrating a launcher for HERO 120 loitering munition from Rheinmetall’s partner UVision into the turret is equally possible. This enhances the KF51’s ability to strike targets beyond the direct line of sight.

Survivability and force protection: The Panther has a fully integrated, comprehensive, weight-optimized protection concept, incorporating active, reactive, and passive protection technologies. Without a doubt, the concept’s most compelling feature is its active protection against KE threats. It increases the level of protection without compromising the weight of the system.

Rheinmetall’s Top Attack Protection System (TAPS) wards off threats from above, while the fast-acting ROSY smoke/obscurant systems conceals the KF51 from enemy observation. Moreover, its digital NGVA architecture enables the integration of additional sensors for detecting launch signatures. Thanks to its pre-shot detection capability, the KF51 Panther can recognize and neutralize threats at an early stage. Designed to operate in a contested electromagnetic environment, the KF51 is fully hardened against cyber threats.

Controllability and networking: The KF51 Panther features an innovative operating concept. It is basically designed for a three-person crew: the commander and gunner in the turret and the driver in the chassis, where an additional operator station is available for a weapons and subsystems specialist or for command personnel such as the company commander or battalion commander.

Designed in accordance with NGVA standards, the tank’s fully digital architecture enables seamless integration of sensors and effectors both within the platform as well as into a networked “system of systems”. The operation of sensors and weapons can be transferred instantly between crew members. Each operator station can take over the tasks and roles from others, while retaining full functionality. Since the turret and weapons can also be controlled from the operator stations in the chassis, variants of the KF51 Panther with unmanned turrets or completely remote-controlled vehicles are also planned in the future.

Reconnaissance and situational awareness: Thanks to the panoramic SEOSS optical sensor and EMES main combat aiming device, the commander and gunner are both able to observe and engage targets independently of each other, both day and night, while a stabilized daylight and IR optic with integrated laser rangefinder is available to both. In addition, via a display in the fighting compartment, the crew has a 360°, round-the-clock view of the vehicle’s surroundings. Integrated, unmanned aerial reconnaissance systems enhance the crew’s situational awareness in built-up areas and in the immediate vicinity of the vehicle. With these, the crew can also conduct reconnaissance under armor protection and share the results with other actors in a networked manner.

Mobility: The KF51 Panther builds on the mobility concept of the Leopard 2. With an operational weight of just 59 tons, it delivers far greater mobility than current systems and has a maximum operating range of around 500 kilometers. Without prior preparation, it fits into the AMovP-4L profile, something no other current main battle tank upgrade can do. Consequently, the KF51’s tactical and strategic mobility set it apart.

Logistics: Thanks to Rheinmetall’s innovative development approach, users, maintenance specialists, logisticians, and procurement experts from all current and future user nations can play an active role in shaping the vehicle’s future. Rheinmetall has longstanding experience in establishing global supply chains in order, in cooperation with user nations, to make sure that a large share of production is carried out in-country, thus helping to create and/or preserve sovereign capabilities and capacities.

Future viability: In developing the KF51, Rheinmetall not only set out to modernize existing main battle tank concepts. Starting from scratch, it completely reconceived the platform. The KF51 Panther can be easily updated and equipped with the latest capabilities and functions. Its advanced, modular, open NGVA system architecture enables iterative development, which can then be updated in harmony with innovation cycles. The KF51 is the first representative of a new generation of combat vehicles. Soon, future innovations will enable environmentally friendly peacetime operations and further optimization regarding automation and combat effectiveness.

Of note, 6,565 Leopard Is were produced from 1965 to 1984, and at least another 3,600 Leopard 2s since then. With the current use of armed drones– which cost a lot less than expensive German-made main battle tanks and have proved very good at their job in Armenia, Syria, and Ukraine– it remains a question of if the new Panther will ever see the same sort of popularity.

Would you like to know more? Check out this 20-page brochure from Rheinmetall.