The Refuse of War, 40 Years on

Posted on June 14, 2022 by laststandonzombieisland 4 comments

On 14 June 1982, the two-brigade-sized British Army and Marine force secured the final defeat of a reinforced division-sized Argentine military element in the Falkland Islands.

Original telex message from Major-General Sir Jeremy Moore to London announcing the recapture of the Falkland Islands, 14 June 1982. The signal, marking the end of the Falklands War (1982), is based in part on a similar surrender signal sent to Winston Churchill by Field Marshal Montgomery from North West Europe in May 1945. NAM. 2013-11-17-1

As the Argentines were quickly repatriated, sans equipment and arms (except for being able to march off with their unit flags while the officers, in an ode to chivalry, kept their sidearms) the invaders left behind a lot of gear that became the property of the Crown. 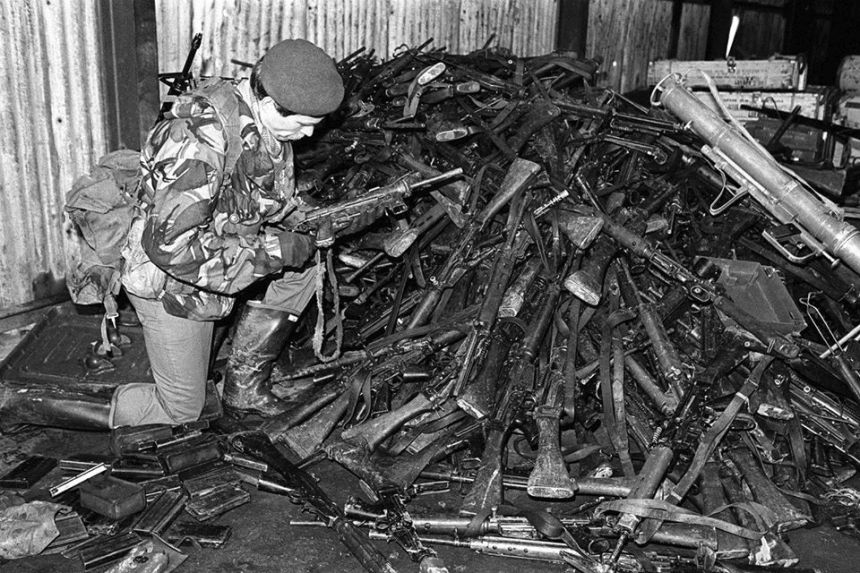 A rubber-booted SAS man, armed with an M16, inspects captured Argentine weapons in the Falklands. In his hands is an American-made M3 Grease Gun SMG. The pile includes a 90mm M20 “Super bazooka,” assorted FN FAL rifles, and other items, now all “property of the Queen.” 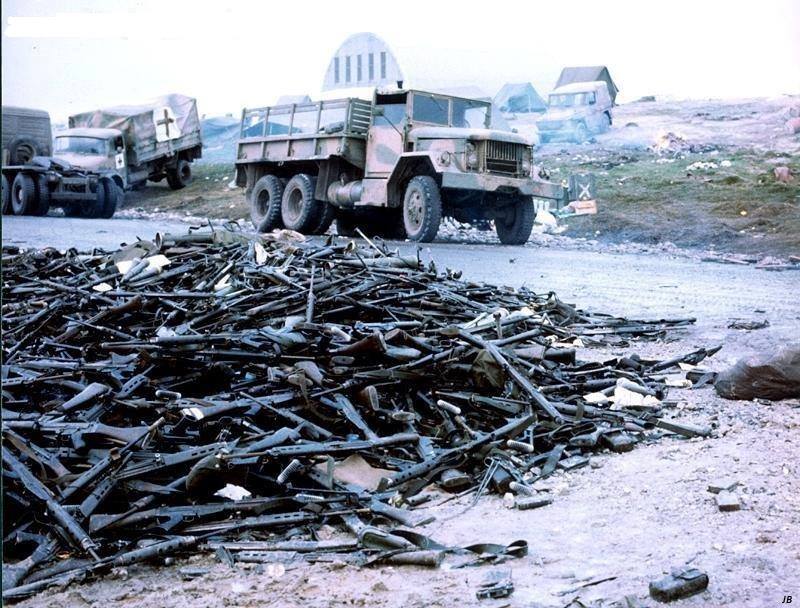 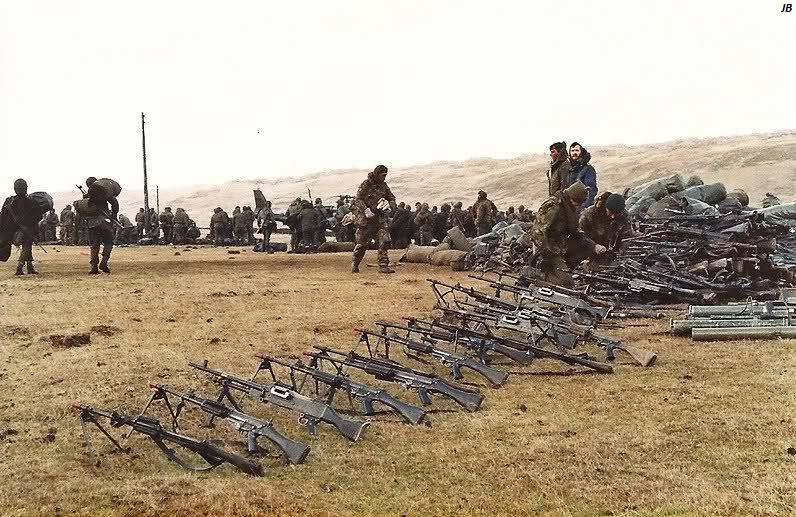 As the FALs were select-fire metric variants rather than UK-standard L1A1 inch-pattern semi-autos, they did not mesh with the British supply train and were mostly discarded– dumped at sea in the deepwater offshore. 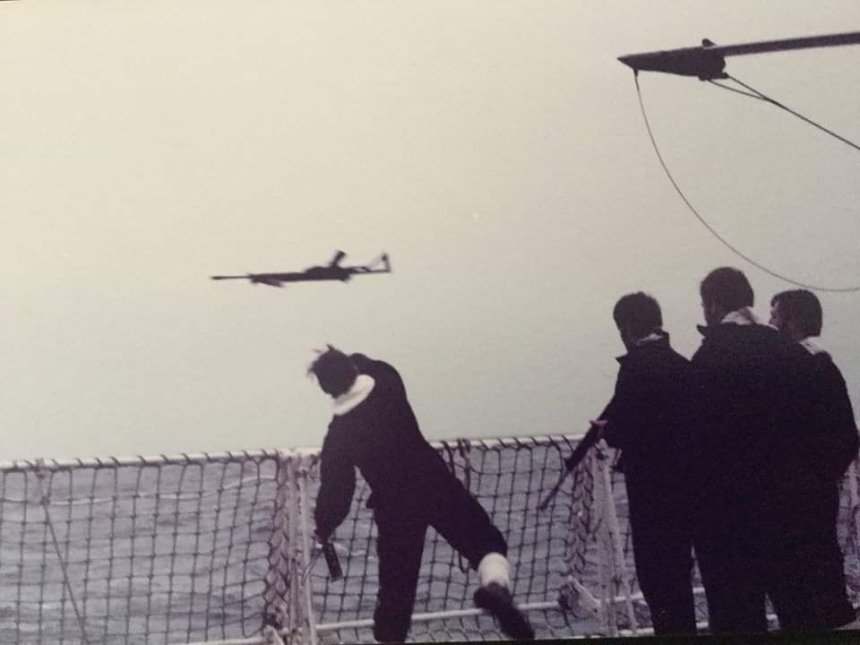 Some rumors persist that at least a few container loads were clandestinely given away to needy anti-communist guerillas in Third World stomping grounds but, of course, those are just rumors until such action is declassified. What is known is that at least some were transferred to the Sierra Leone government as military aid for their security forces.

Plus, the MOD was totally against any trophies being brought back home, as had occurred in the World Wars and Korea.

But what of the larger stuff?

Some 90 Blowpipes were discovered among the Argentine equipment

Argentia’s occupation force included 12 of these Panhard AML-90 armored cars. Due to the terrain on the islands, they were restricted to the roads around Port Stanley and saw very little fighting. They were all captured more or less intact and the two best examples were brought to the UK. One is at the Household Cavalry barracks in Bulford, and one is in The Tank Museum collection. 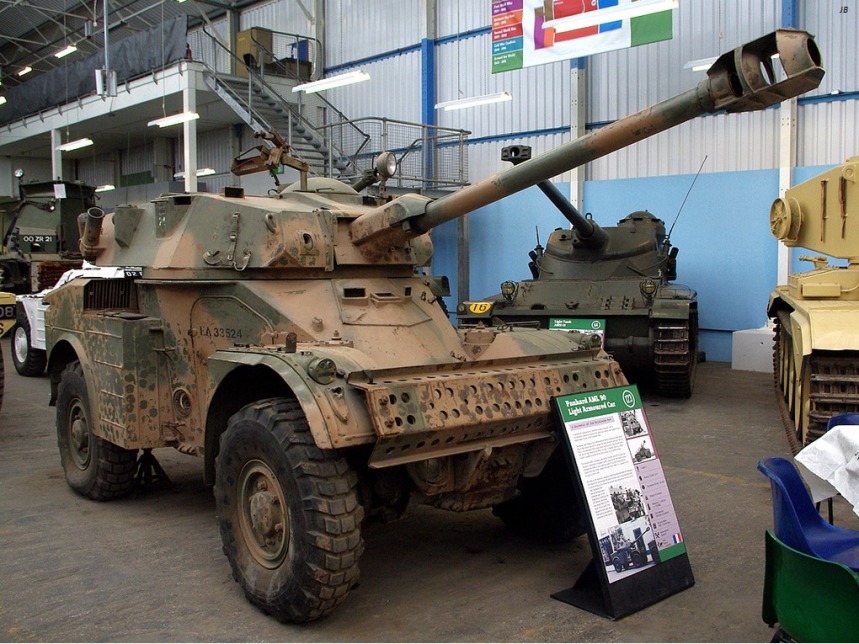 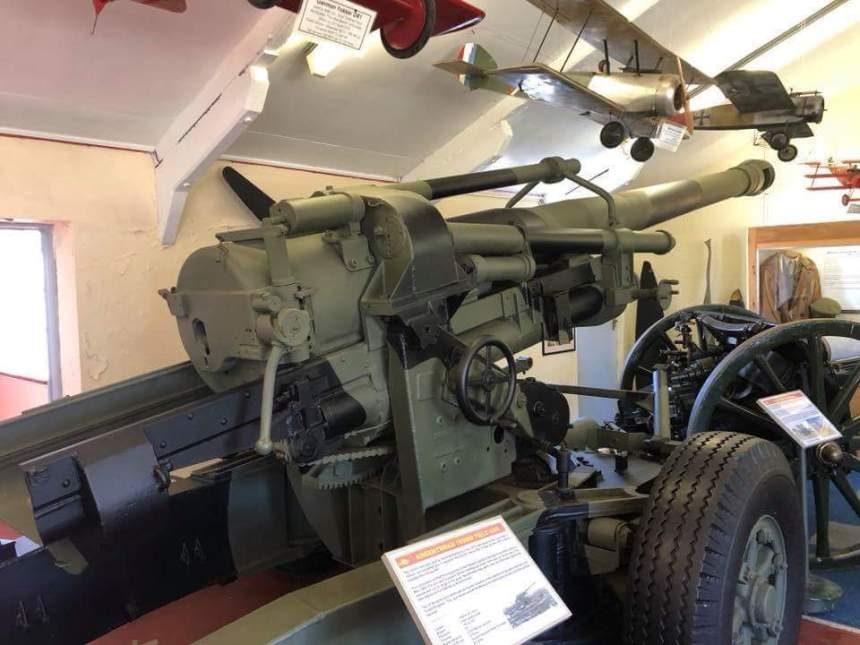 One of the two CITER 155s brought back to the UK, is currently at the Marine Museum in Norfolk

The ammunition and Blowpipes, however, were absorbed and fired off by the MOD in training. No word on what happened to the SA-7s, but if you told me they made it to the muj in Afghanistan who were then fighting the Soviets, as often hinted at, I would not scoff.

Likewise, the vehicles were kept in the Falklands and used by the follow-on garrison with some of the Unimogs surviving into the 1990s.

One of the captured Argentine Panhards has long been on display at the Bovington Tank Museum while most ended up as hard targets for the British Falklands garrison.

Perhaps the most useful of the kit, the Skyguard radars, and Oerlikon flak guns, were used by the RAF Regiment, protecting airbases in the UK, against the Russians until the end of the Cold War. 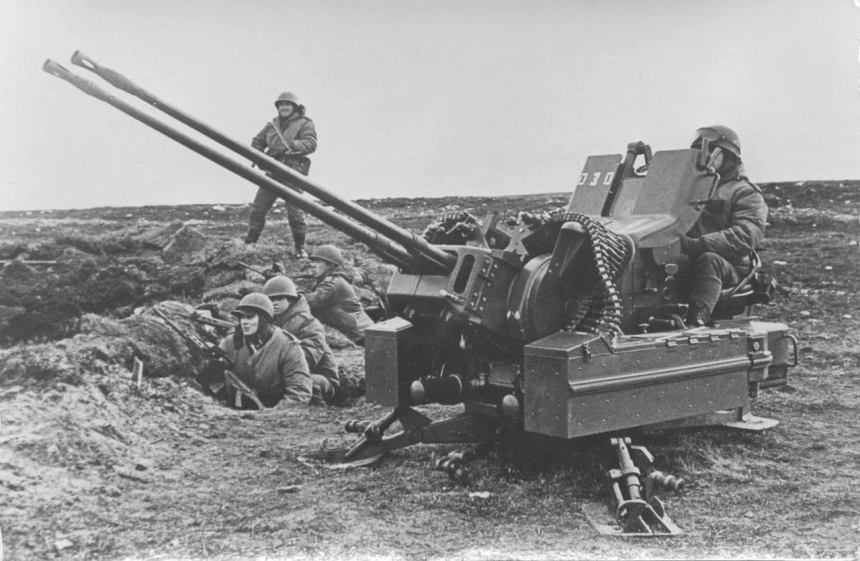 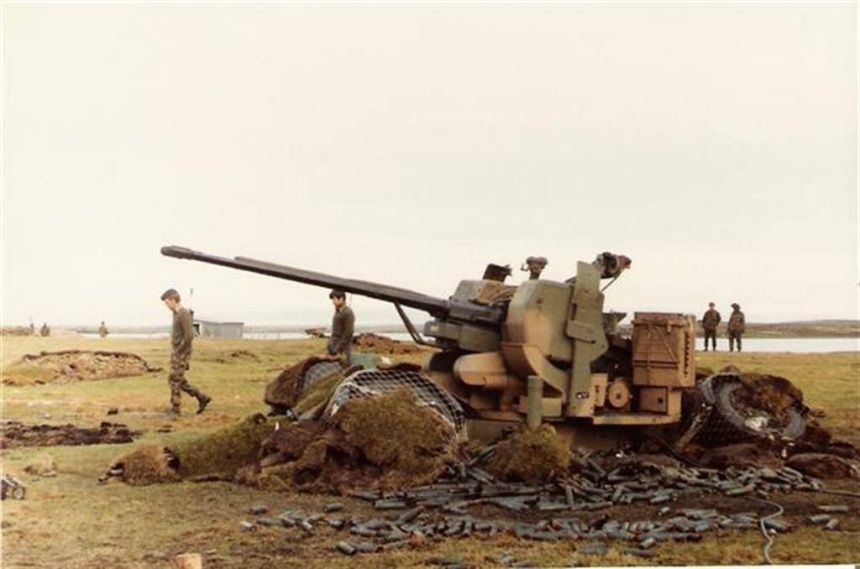 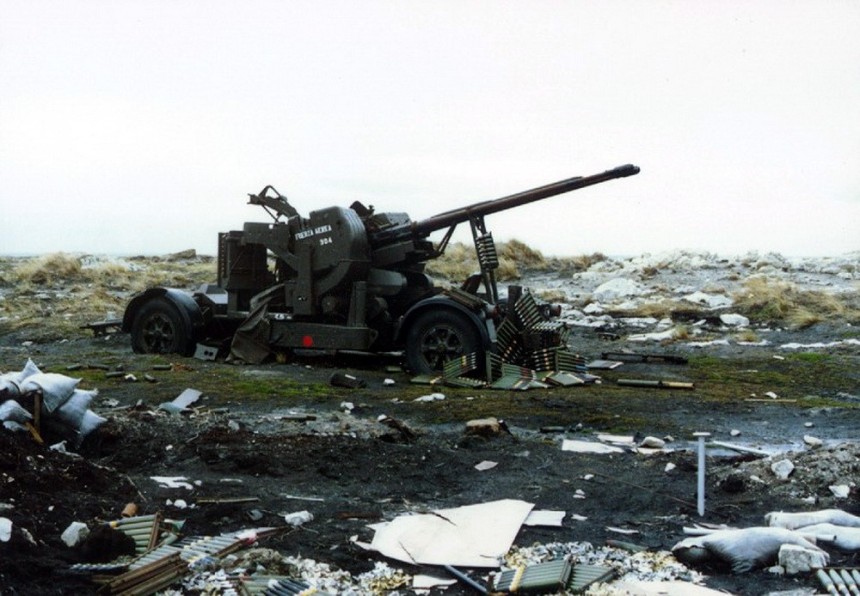 The aircraft and artillery pieces were typically just used as museum pieces except for the damaged Chinook, which was mated with other parts and returned to service with the RAF. 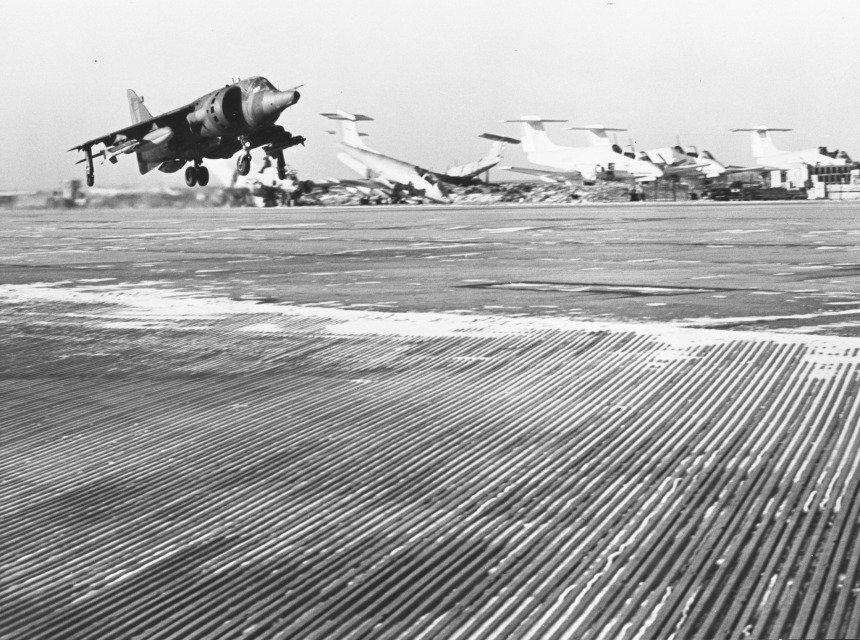 RAF Harrier GR3 at RAF Stanley with several Pucara wrecks in the background. Notice the matting on the ground.

22 SAS D squadron commander Cedric Delves Pebble Island Pucara, after the surrender in June 1982, looking at their work handiwork. Note the M-16s, which the SAS and SBS used almost exclusively

A Boeing Chinook (k Bravo Juliet off Atlantic Contender) hauls the wreck of an Argentinian Pucara away. The Pucara is a ground attack aircraft but had little impact on the battle. A captured Pucara is in storage at the RAF Museum.

A Pucara wreck. Some were brought to Britain for tests but most wrecks stayed on the islands for several months, proving popular with incoming garrisons looking for a photo op

As for the 90-foot patrol boat Islas Malvinas, she was renamed HMS Tiger Bay and used until 1986 when she was sold for scrap which is a pity as she would have made an interesting little museum ship that would have required little in the way of maintenance. 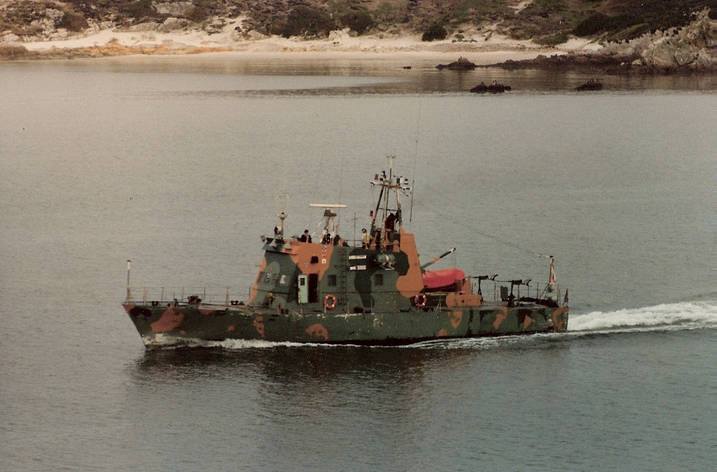