80 Years Ago: Welcome to the Fleet, Big Al

Posted on August 16, 2022 by laststandonzombieisland 4 comments

Ordered on April Fool’s Day 1939 from Norfolk Navy Yard, at a time when Czeechlovakia had ceased to exist and Poland was looking to their borders, Battleship No. 60 would be the final super-dreadnought of the South Dakota class before the Navy would move on to the penultimate Iowa-class battlewagons. Some 1,233 days later, with the entire globe at war and the U.S. Navy with most of its capital ships either at the bottom of the Pacific or undergoing reconstruction at West Coast yards, the sixth USS Alabama (and second battleship with the name) was commissioned at Norfolk, 80 years ago today: 16 August 1942.

“Battle Wagon” – an etching of USS Alabama fitting out at the Norfolk navy yard in 1942. The crane ship USS Kearsarge (AB-1) is alongside. Etching by John Taylor Arms. NH 57758 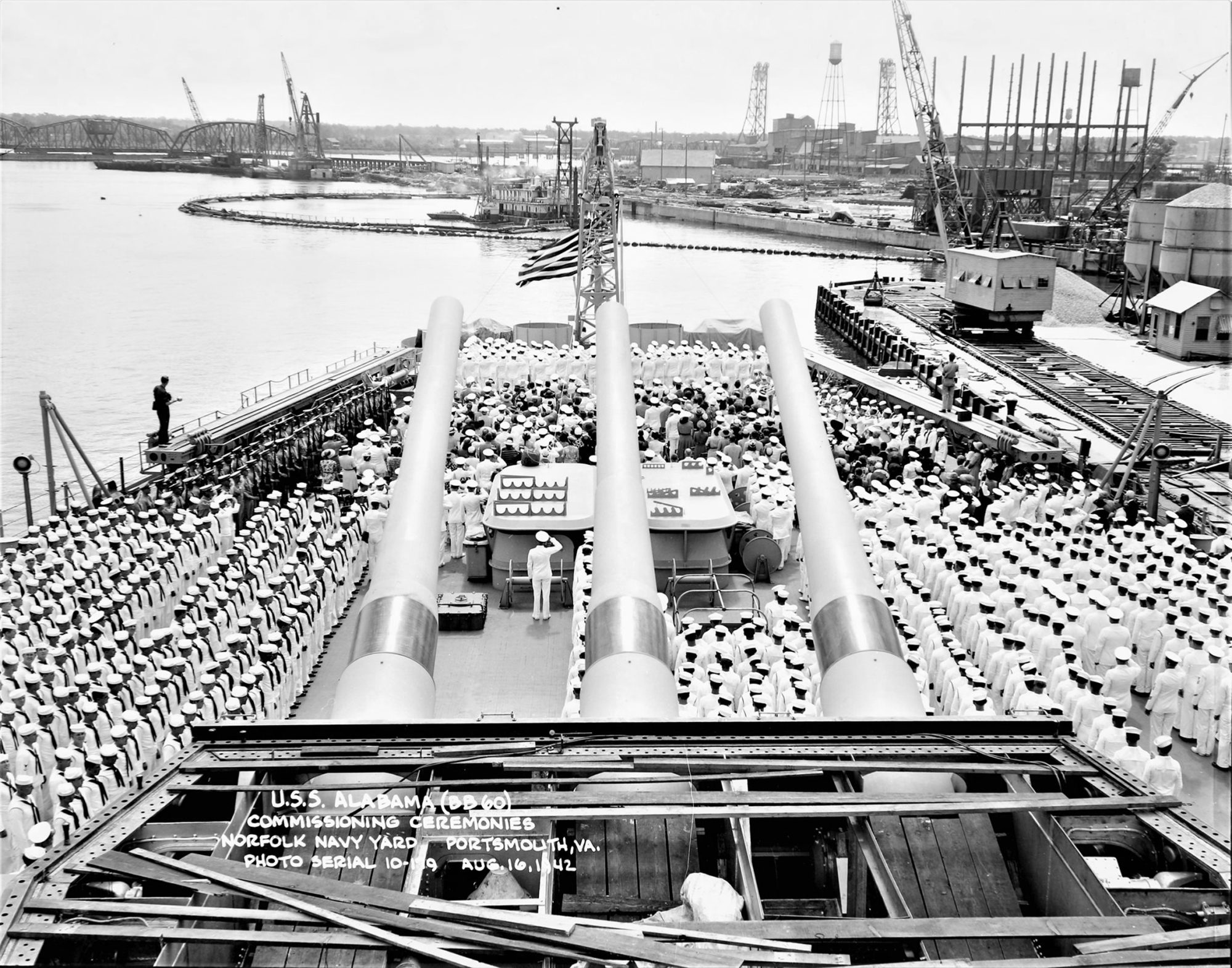 USS Alabama (BB-60) Commissioning ceremonies Norfolk navy yard, Portsmouth, Virginia, 16 August 1942. She is berthed at the uncompleted Pier 6, on 16 August 1942. In the foreground, note the open top of turret# 3 on Alabama. In the distance on the left, note the center swing span on Beltline Railroad Bridge, in the extreme distance, you can see the uprights of the now-gone Jordan Bridge. Note the small rail crane to the right of the bow, as dredging of the turning basin and construction of Dock# 8 & Berth 42/43 continued. NH 57760

However, Alabama would not immediately head to the Pacific where Nimitz was at the time sorely in need of ships– a decision had been made to keep the battleships out of the contest for Guadalcanal due to the immense quantity of fuel they needed and the shortage of oilers. Therefore, she would shakedown slowly on the East Coast and, when she finally got operational eight months later, it would be on loan to the British Home Fleet to help cover North Atlantic convoys in case Tirpitz or other German surface raiders broke out from Norway.

Finally, released by the British, Alabama departed Norfolk on 20 August 1943– a year and a week after she was commissioned– for the Pacific where she would spend the next two years earning nine battle stars for her World War II service. 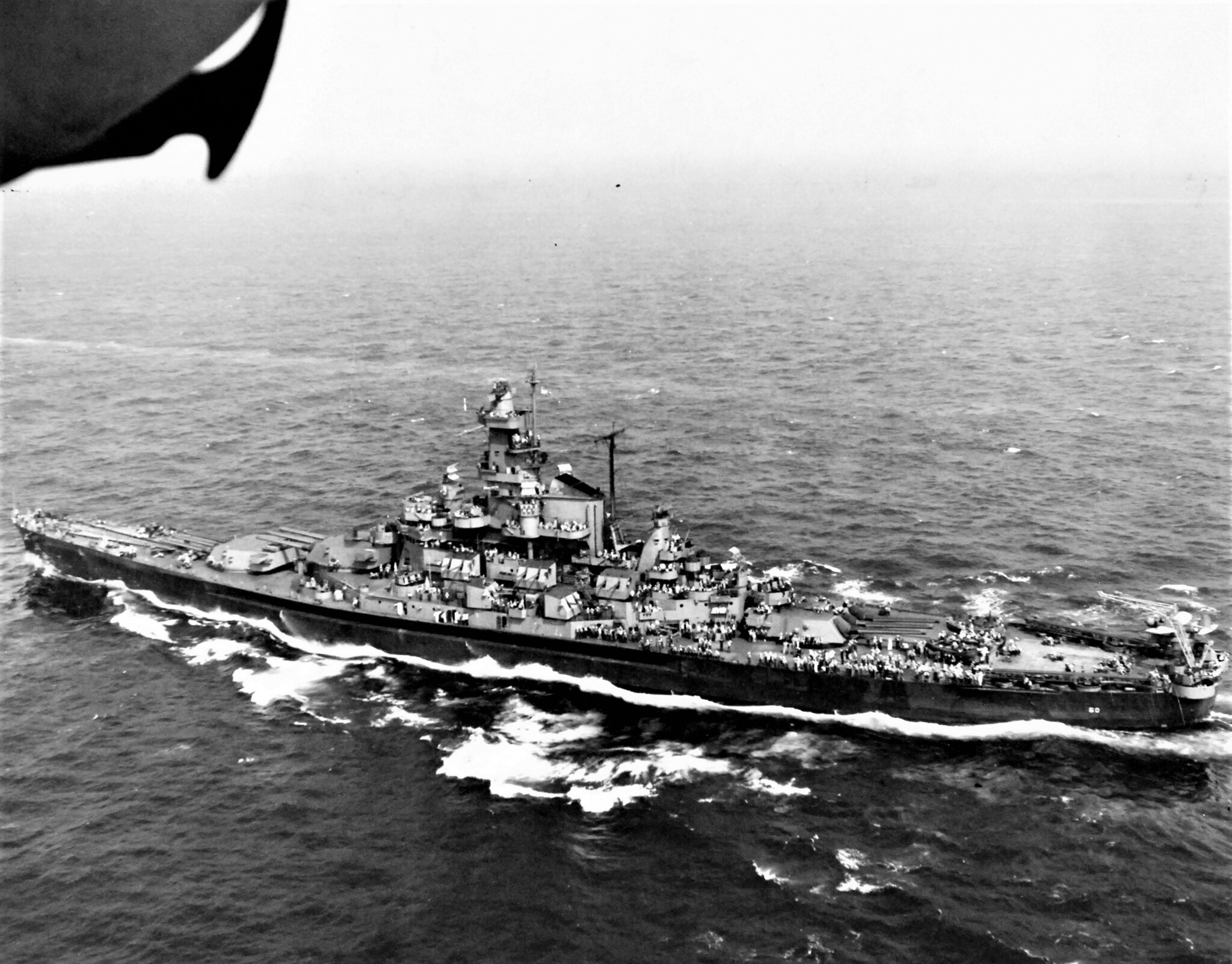 A lucky ship, Alabama suffered no casualties during the war and decommissioned on 9 January 1947.

After spending 15 years assigned to the Pacific Reserve Fleet, stationed in Bremerton, she was saved from the scrappers by a public drive from her “home” state and towed to Mobile, where she opened in 1965 as the centerpiece of the Battleship Memorial Park that is still going very strong today.

At this point, she has spent 14 years as a museum ship for every year she spent on active service!

I’ve toured Alabama dozens of times over the years, and she has always been beautiful, even at age 80.

Importantly, the Park is amid a five-phase $8.5 million Teak Deck Replacement Project that is slated to be completed in 2024, and she has never looked better.