Some 80 years ago today, a warship and her entire crew vanished from the waves and not a single confirmed piece of her has ever been seen since.

Constructed in 1941 at Snow Shipyards in Rockland, Maine, the 225-ton, 116-foot wooden-hulled longline trawler F/V Belmont was acquired for $2,122 on 19 June 1942 by the U.S. Coast Guard for use on the newly-formed Greenland Patrol, watching over the Danish possession and fighting the “Weather War,” keeping German radio and meteorological stations out of the frozen land.

Commissioned as USCGC Natsek (WYP-170), named in honor of a geographical feature on Greenland, her armament was slight– an old 6-pounder 57mm gun taken from prewar cutter stocks that was deemed still deadly enough to haul over German weather trawlers in spotted, two 20mm Oerlikons should she encounter a German Condor patrol plane, and two short depth charge racks should she see a U-boat.

Assigned to CINCLANT control out of Boston with the rest of the Greenland Patrol, Natsek could make a stately 11 knots and cruise at 9.5. Her and her Snow-built half-sisters USCGC Nanok (ex-F/V St. George) and USCGC Nogak (ex-F/V North Star), earned the nickname of “wooden shoes” as they looked, well, like large wooden shoes and had about the same characteristics.

Other vessels of the Greenland Patrol converted at the time included seven larger and sturdier steel-hulled trawlers (F/V Helka, Lark, Weymouth, Atlantic, Arlington, Winchester, and Triton) that likewise received similar armament and Greenland geographical monikers but starting with an “A” to set them apart as a class (USCGC Alatok, Amarok, Aklak, Arluk, Aivik, Atak, and Arvek, respectively).

Besides keeping the Germans out of Greenland, the Patrol’s primary task was to establish and supply a series of 14 “Bluie” met and HF/DF stations around the coastline. Airfields would soon be added to these isolated stations to allow them to serve as way stations for the North Atlantic ferry route, running planes from bases in Labrador to Scotland with stops in Greenland and Iceland.

The fact that these converted trawlers could carry 90 tons of cargo below decks and draw but 11 feet of seawater when doing so helped greatly. While it would seem folly to us today to task 10 small vessels (the largest of these, Winchester/Aivik, was only 590 tons and 128 feet overall) with such a mission, keep in mind that the locations chosen for the Bluie stations were often only reachable by snaking through dense fields of icebergs and narrow fjords, so chosen to remain hidden from German surface raiders.

Natsek’s first patrol, began just ten days after she was commissioned, with newly-minted Lt. (jg) Thomas La Farge, USCGR, skipper. La Farge, who had no prior military experience, received his temporary commission as he was “a yachtsman and lover of ships” and noteworthy as a grandson of the late, great, muralist, John La Farge.

She set sail for Greenland waters in company with the minesweeper USS Bluebird (AM-72), and fellow USCG-manned armed trawlers Atak and Aivik, as part of CTG 24.8 on 29 June. Arriving at Bluie West #1 (Narsarssuak) on 20 July, Natsek plied Greenland waters, supplying Bluie stations through the month of August. Beginning on 28 September, she set sail from Narsarssuak to transport supplies, equipment, and personnel to Skoldungen to establish and build a weather station. She arrived there on 12 October. She continued on to help establish another weather station, this time at Torgilsbu and later that month another one at Skjoldungen.

On 9 November she was ordered to assist in looking for a downed plane along the southeast coast of Greenland.

On 14 December 1942 Natsek departed Narsarssuak in a convoy with Bluebird and fellow “wooden shoe” USCGC Nanok, to return to Boston via Belle Isle Strait.

In January, the Navy made it official after she was several weeks overdue. 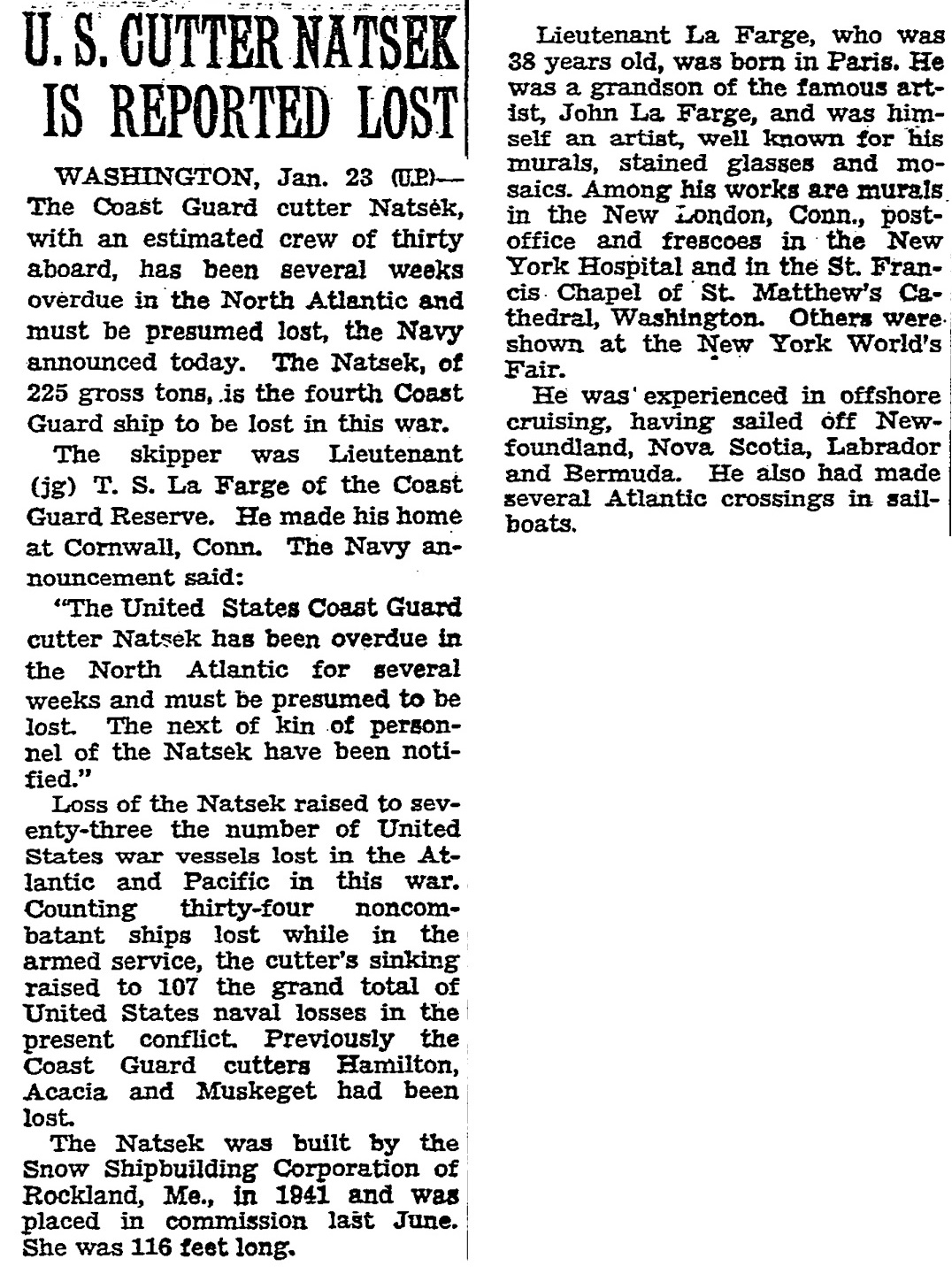 The detailed story of her disappearance, via the 1947 report, “The Coast Guard at War: Lost Cutters”

This, from “Death of a Wooden Shoe :A Sailor’s Diary of Life and Death on the Greenland Patrol, 1942” by Thaddeus D. Nowakowski, a journal kept by a Coast Guardsman during his six crucial months as a seaman on board Natsek’s sister, USCGC Nanok, and digitized by the Coast Guard Historian’s Office in 1994:

Besides LaFarge, Natsek vanished with a crew of 23 including 10 Coast Guard regulars (counting both her chiefs) a Navy radioman, and 12 wartime-era recruits. Considered lost at sea, their names are inscribed on the World War II East Coast Memorial in Manhattan’s Battery Park as well as a marker at Arlington that notes of the Natsek:

The entire crew of 23 men and one commissioned officer are considered to have met death in the line of duty on or after 17 December 1942, as a result of drowning.”

Natsek at the time was the fourth Coast Guard ship to be lost in WWII and 107th American vessel overall. Ultimately, the USCG would lose no less than 40 vessels in the conflict.

As for the Weather War, the Allies won and today, Bluie West Six is Thule Air Base, still an important enough asset that the Pentagon on Friday awarded a $4 billion civil engineering and maintenance contract to a local firm in Greenland, Inuksuk A/S, running through 2034.