One of the smallest of the armed forces– in manpower terms only about a tenth the size of the U.S. Navy, and roughly equivalent in the same metric to the much better-funded French Navy — the U.S. Coast Guard has been showing up overseas a lot recently.

Yesterday, the icebreaker USCGC Healy (WAGB 20), arrived in Baltimore following a recent transit of the Arctic’s Northwest Passage for the first time since 2005. Importantly in terms of polar commerce, Healy’s skipper said the ice had receded to the point that the cutter’s crew couldn’t even get an “ice liberty” call.

“A lot of the floes had melt ponds with holes in them like Swiss cheese,” Capt. Kenneth Boda, commander of the Seattle-based icebreaker, told the Seattle Times. “We couldn’t get the right floe.”

Healy left her Seattle homeport on July 10, arrived at Dutch Harbor 19 July, conducted operations in the Gulf of Alaska and the Bering Sea, then entered the Chukchi Sea, crossed the Beaufort Sea, entered the Northwest Passage which involved transiting the straits between Banks and Victoria Island and Devon and Baffin Island, proceeded down Baffin Bay and the Devon Strait, calling at Nuuk, Greenland on 13 September. From there, she proceeded through the Labrador Sea to Halifax (9 October) and Boston (14 October) before calling at the Coast Guard Yard in Baltimore after a 102-day cruise starting in the Pacific, running through the Arctic Ocean, and ending up on the Atlantic coast. 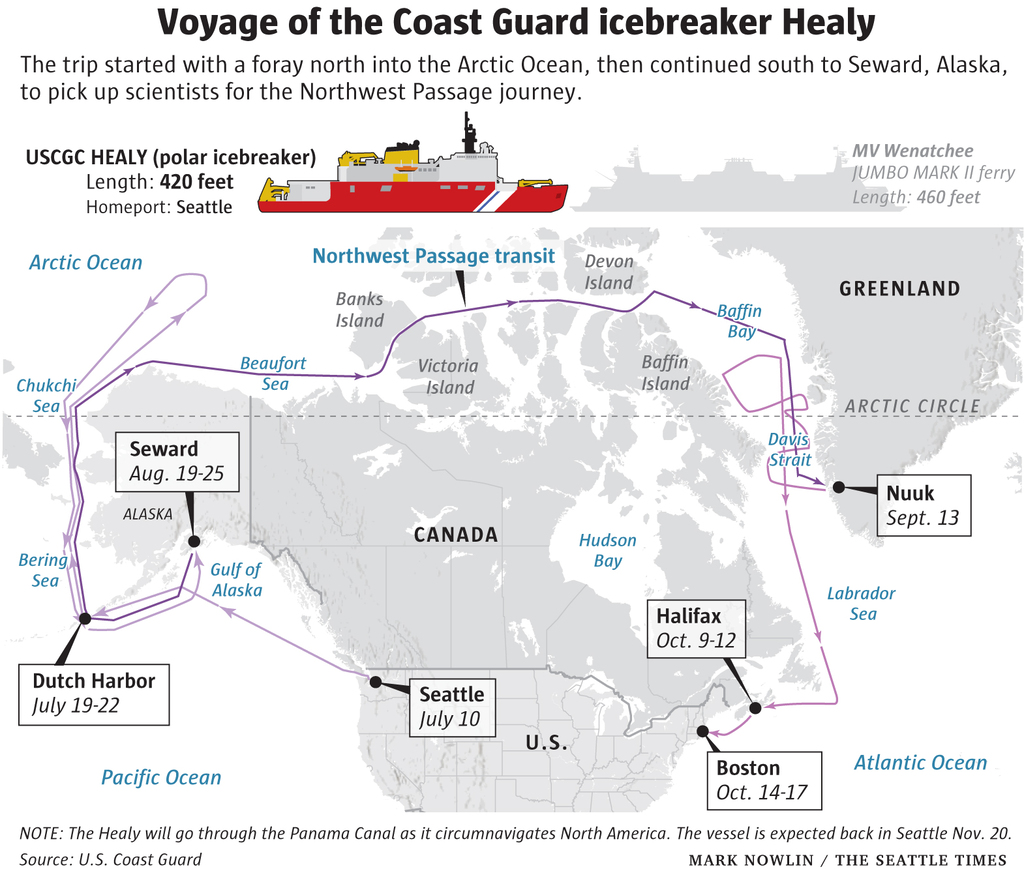 It should be pointed out that Healy is one of the Coast Guard’s polar-capable icebreakers and the service operates her as a “multi-mission vessel to protect American interests in the Arctic region.” However, she is only termed a “medium icebreaker,” built more for science than for crushing ice. Further, her only provision for armament is pintel mounted crew-served weapons, such as .50 cals, which are almost always stowed. 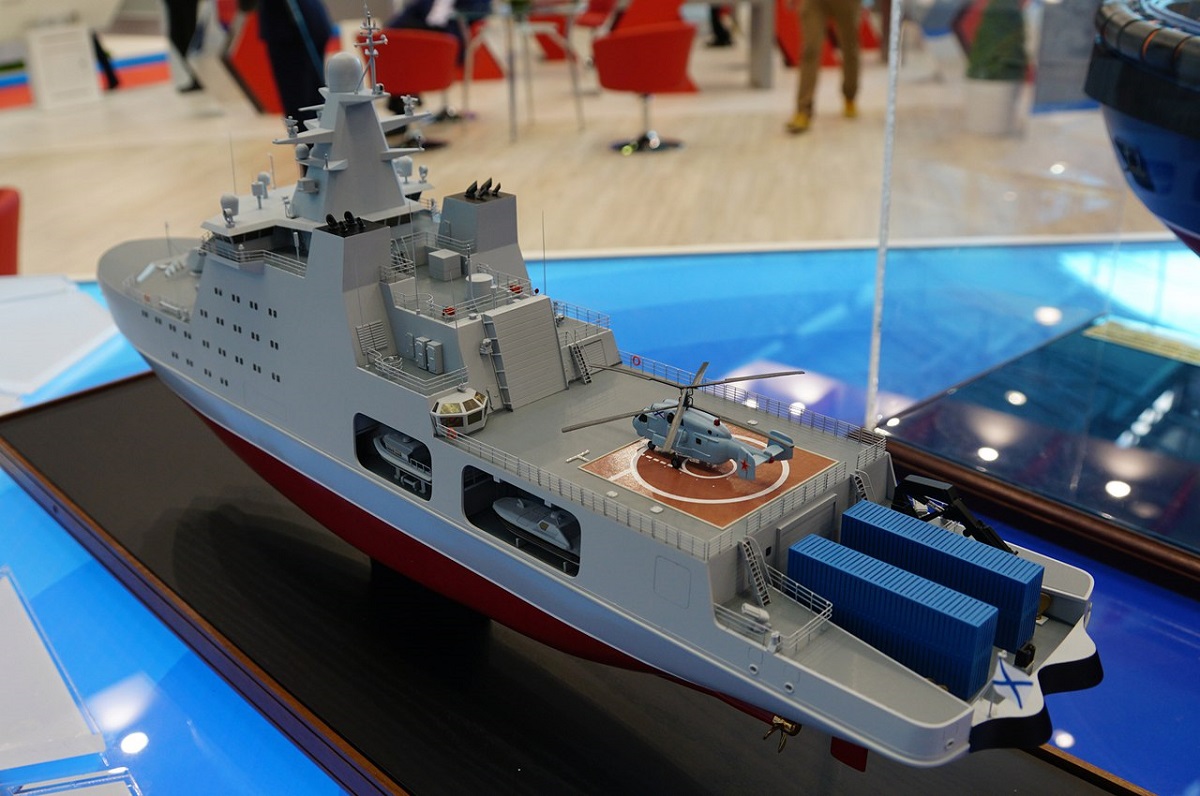 Keep in mind that in 2018, then-USCG Commandant Paul Zukunft said while speaking at the Surface Navy Association that the service’s new heavy icebreaker (I mean Polar Security Cutter) class building in Mississippi will have space, weight, and electrical power set aside to carry offensive weapons, such as the Naval Strike Missile.

Besides talking about polar presence, the Coast Guard is increasingly showing up in points West, as exemplified by the return this week of the U.S. Coast Guard Cutter Munro (WMSL 755) and crew returned to their Alameda homeport Wednesday following a 102-day, 22,000-nautical-mile deployment to the Western Pacific.

The 418-foot National Security Cutters like Munro, essentially an old school fast frigate sans ASW weapons (but with sonar), have been making WestPac cruises under the tactical control of Commander, U.S. 7th Fleet, with much regularity. Big Navy likes these white hulls as they are arguably more capable than the LCS and free up precious DDGs from nation-building and flag-waving evolutions so they can spend more time with the carrier and phib groups. 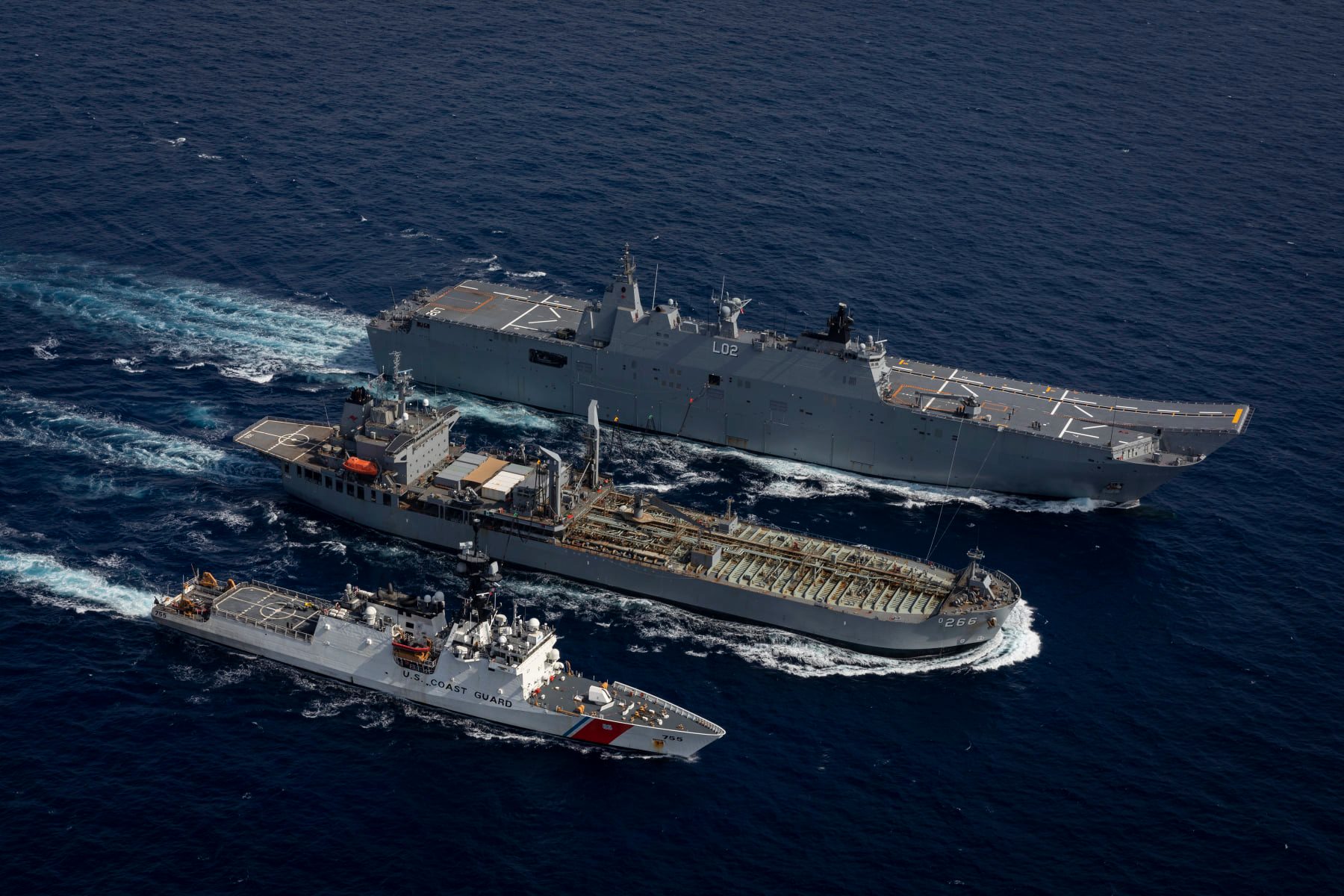 During her deployment, in addition to meshing with U.S. Navy assets, Munro worked alongside the Japan Coast Guard, the Japan Maritime Self Defense Force, the Philippine Coast Guard and Bureau of Fisheries and Aquatic Resources, the Royal Australian Navy, and the Indonesia Maritime Security Agency. She also kept tabs on a Chinese naval task force found unexpectedly operating just off the Aleutians.

Since 2018, three other National Security Cutters – Bertholf, Stratton, and Waesche – have deployed to the Western Pacific.

Finally, as many gently-used former Coast Guard assets, including 110-foot Island-class and 87-foot Maritime Protector-class patrol boats, are being gifted to overseas allies, the USCG has been training the incoming new owners. Such an example is the below video from VOA, posted this week, of USCG personnel training Ukrainian navy bluejackets.