Here we see what Normandy looked like a week after Overlord in combat artist and Combat Gallery Sunday alum Dwight Shepler‘s 1944 watercolor, “D-Day Plus Seven, Omaha Beach Head, Landing scene with the Landing Ship Tanks on the beach discharging their cargo.” 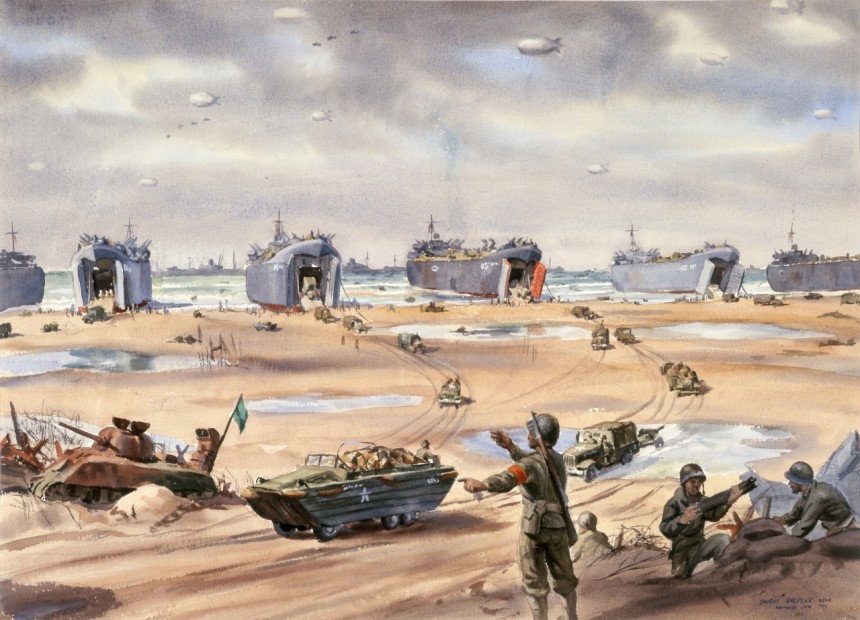 Official caption by the artist:

On Omaha beachhead the wreckage of assault has been thrust aside and reinforcements pour from LSTs which line up to spew forth their mobile cargo. It was not an uncommon sight to see thirty LSTs “dry out” and discharge their load on one ebb tide, and float away on the flood. The tide was 20 foot. With the sight repeated on Utah beach and the British beaches, the lift carried by various amphibious craft was enormous. The great offensive that broke out at St. Lo, swept through Avranches to ship off Brittany and swing for Paris, was mounted with men and material that came in over the beach.

As a footnote, classicly-trained Shepler learned his trade at Williams College and worked at the Boston Museum School of Fine Art prior to the war, then enlisted as an officer in the Navy Reserve in 1942 at age 37 to lend his brush to Uncle Sam. He took part not only in Normandy but in the landings at Ormoc Bay and Lingayen Gulf and operations at Corregidor and Bataan. In all, he produced more than 300 works for the military before returning to civilian life where he went back into teaching art and producing landscapes, sports scenes, and portraits. He passed in 1974. 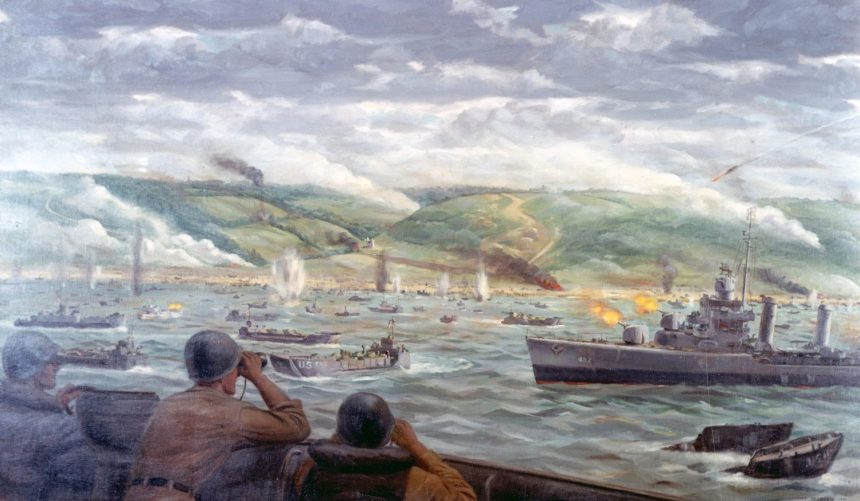 “The Battle for Fox Green Beach,” watercolor by Dwight Shepler, showing the Gleaves class destroyer USS Emmons (DD 457) foreground and her sister ship, the USS Doyle, to the right, within a few hundred yards of the landing beach, mixing it up with German shore batteries on D-Day