Army snipers getting some new gear

A few interesting contracts have come through the DOD in the past couple months which could mean some big news for the Army’s 3,500 snipers across active, guard and reserve units as well as those in the U.S. Special Operations Command.

The first involves the a kind of under the radar (less than $3 million) contract to Tennessee-based Barrett Firearms or an undisclosed number of MRAD rifle systems chambered in .300 PRC, but the company said “MRAD’s robust design, user modularity and unfailing accuracy combined with the new cartridge designed by Hornady, offer an unbeatable system for long-range effectiveness.” 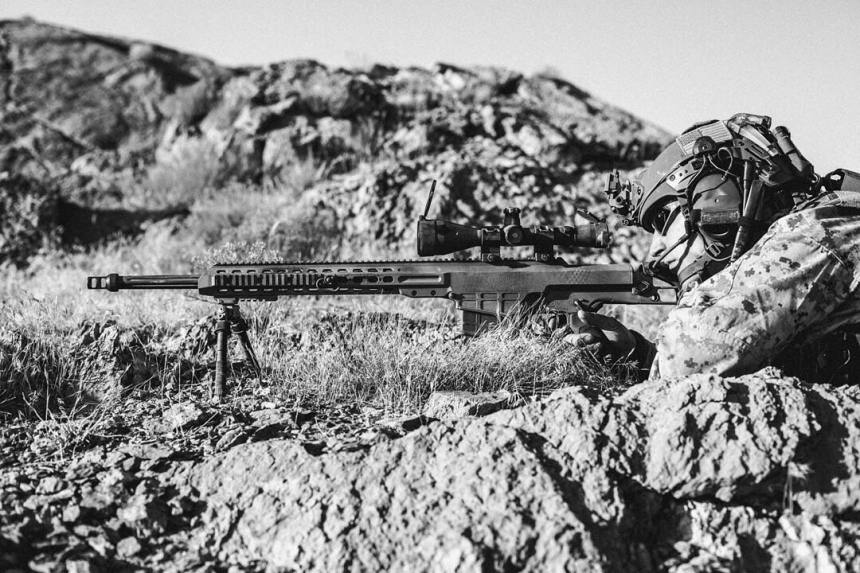 Barrett currently lists the bolt-action MRAD precision rifle in six calibers from .260 Remington to .338 Lapua Magnum, only recently adding the option for barrel conversion kits for the new Hornady round.

The 300 PRC, along with Hornady’s 6.5 Precision Rifle Cartridge, earlier this year earned the approval of the Sporting Arms and Ammunition Manufacturers’ Institute. Described as the “6.5 Creedmoor’s big brother,” the 300 PRC gives precision rifle shooters a flat-shooting, heavy bullet that still brings 2,000 foot-pounds of energy at 500-yards, while still having a manageable recoil.

Termed the Improved Ghillie System, or IGS, contenders for the new lightweight system designed to break up the outline of a sniper’s figure while in a shooting position or stalk was put through several days of visual tests at Eglin Air Force Base in Western Florida by snipers drawn from across the Army. The system is intended to be the service’s first new ghillie suit in a decade, replacing the legacy Flame Resistant Ghillie System first fielded in 2008.

“The current kit is thick and heavy and comes with a lot of pieces that aren’t used,” said Maj. WaiWah Ellison, with the Army’s Program Executive Office Soldier, tasked with the update. “Soldiers are creating ghillie suits with their own materials to match their personal preference. We want to make the IGS simpler and modular so the snipers will use what is issued to them instead of relying on outside resources.” 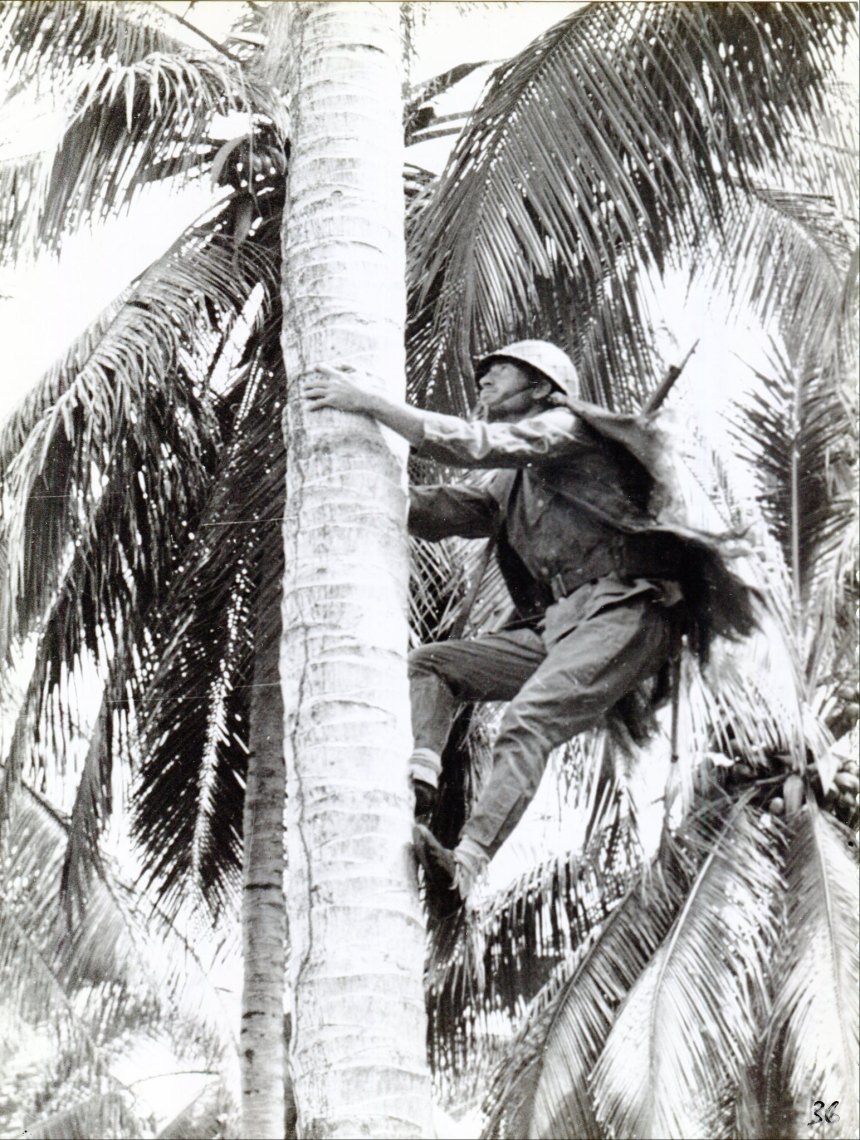 “SNIPER GOES TO ROOST— Garbed in captured Japanese sniper’s outfit, a U.S. Marine on Guadalcanal Island proves that the Japs are not the only fighters who can “shinny” up a coconut tree, secret themselves in the lush foliage and hammer away at unsuspecting troops. Here he is giving them a mock dose of their medicine…

A U.S. Marine dons Japanese snipers outfit and mocks ascent into a palm tree. So well taught in the art of camouflage are the Japanese that were it not for the report of their rifles it would be almost impossible to spot them. Photo was taken on Guadalcanal, B.S.I.P.”

“This is one of mine. This is Sergeant Art I believe, or maybe Sergeant Fue. I get them mixed up. He was one of the survivors of the Getge patrol. Here he’s demonstrating the way the Japanese used that clip thing to climb the trees. Japanese rain cape, Japanese helmet, Japanese rifle. And before he went up, he was very careful to make sure everybody knew that he was one of us and not one of them.” 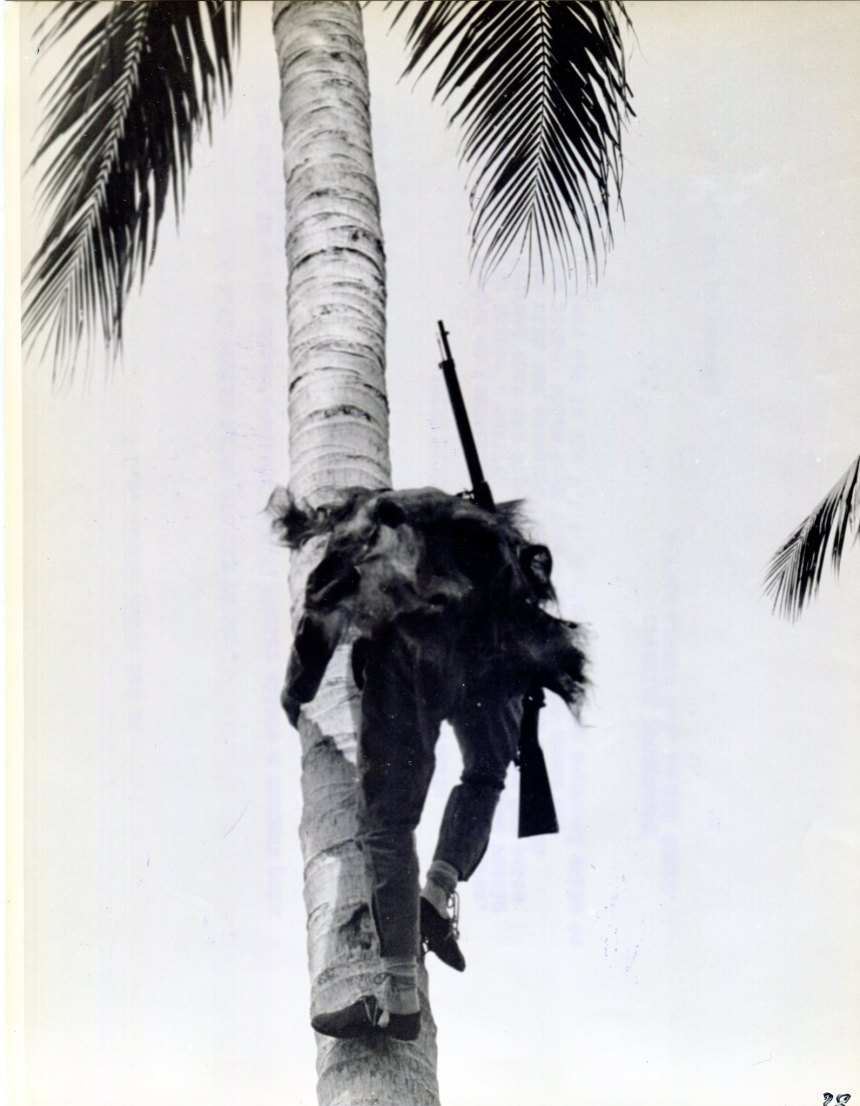 “Coming down” From the Thayer Soule Collection (COLL/2266) at the Archives Branch, Marine Corps History Division

November 4, 1942: “The U.S. Marine at the right shows a companion how he looks in a Japanese sniper’s jacket made of long-haired animal’s skin. The skin blends in with the underbrush making such snipers extremely difficult to locate.” 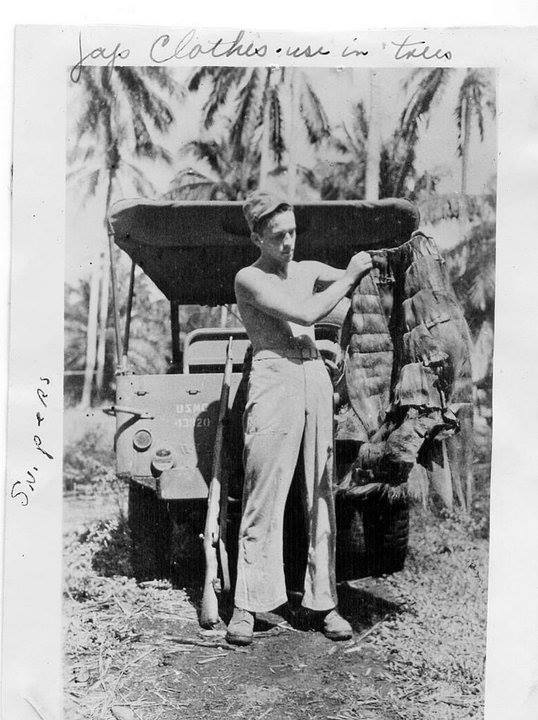 Labeled “Japanese sniper suit for use in trees”

The above capture surely leads to this report:

The garment shown in the accompanying sketch was captured in the Solomons area. A number of similar garments were found packed in bales, and in at least one instance, one was found on a Japanese sniper shot out of a palm tree by U.S. Marines.

It is made from the shaggy, reddish-brown fiber that grows at the base of the fronds of the coconut palm tree. Sheets of this fiber are sewed together to form the garment.

It can serve as a camouflage garment to be used in areas where there are quantities of coconut palms. It has been used by snipers strapped in among the fronds of palm trees, and it could also be used effectively on the ground under suitable color conditions.

Comment: This type of garment is widely used in Japan as a raincoat. Those made of coconut palm fiber are used by Japanese fishermen, while the Japanese farmer makes his with reeds or rushes.

Beyond that, the suit was published in YANK in 1943, as a reference moving forward for Japanese uniforms (look at the right-hand corner). 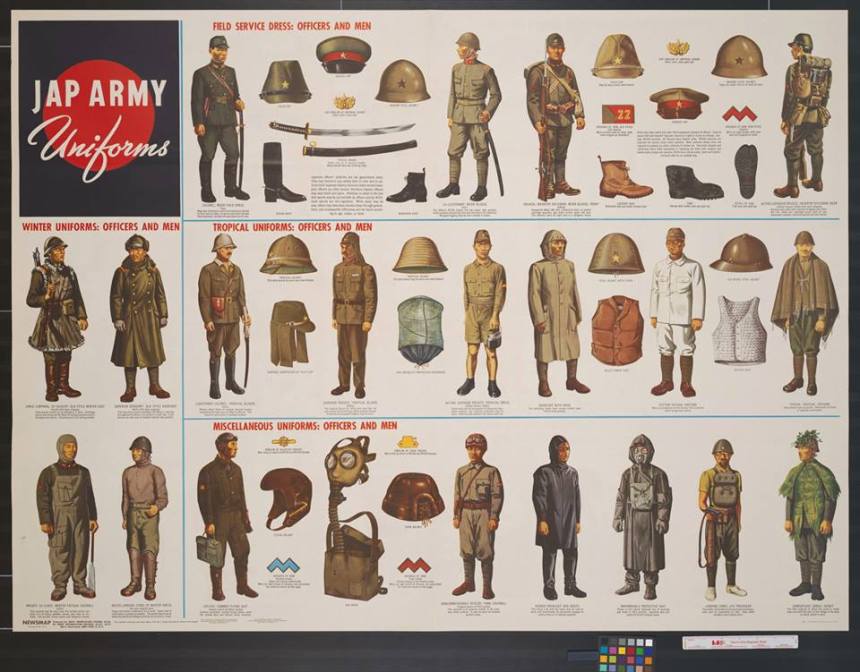