Through the magic of 50 gallons of paint in “four shades of grey, plus black,” workers at the A&P yard in Falmouth gave the River-class Batch 2 OPV HMS Tamar (P233) what I think is a great upgrade to her scheme during a recent maintenance period. Headed to the Asia-Pacific region for an extended deployment, she is the first Royal Navy warship to receive a “dazzle” style camo since the Battle of the North Atlantic concluded in 1945.

“We’re really proud of our new paint scheme and the historical significance that it comes with,” said LCDR Michael Hutchinson, Tamar’s skipper. “Different styles of dazzle were used by the Royal Navy on ships in various stations throughout the world and were are pleased to have been given an iconic new look before we deploy in the summer.”

The Rivers are the equivalent of 19th Century station ships, based for years at a time in far-flung parts of the empire and Commonwealth such as the Caribbean, Falklands, and West Africa.

The 296-foot/2,000-ton OPVs only mount a 30mm gun and some small arms manned by their 40-person crew, which is fine as they are intended for low-risk constabulary-at-sea duties (anti-piracy, counter-smuggling/drug-trafficking, counter-terrorism, et. al). Capable of operating small UAVs alongside a Merlin-sized helicopter and hosting up to a platoon of Royal Marine Commandos, they are much like an LCS or a blue-water coast guard cutter in concept, only much more affordable and realistic.

Tamar has even been experimenting with using jet suits for boardings, which just looks like the coolest thing ever, although sets up a very real game of shooting skeet in the event of a contested boarding.

The Admiralty says all five of the Rivers of the Overseas Patrol Squadron will receive similar dazzle patterns.

Notably, two vessels of the Royal Canadian Navy– HMCS Moncton (MM708) and HMCS Regina (FFH 334)–– are sporting WWII-style North Atlantic patterns in an ode to that campaign. Perhaps they started a trend… 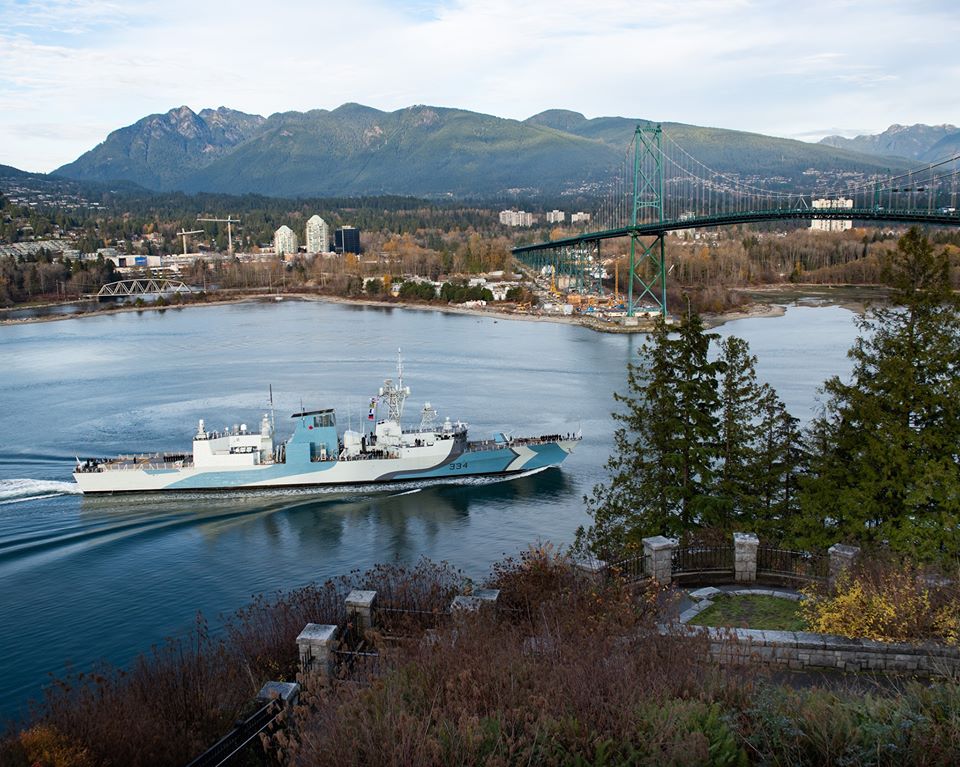 Posted on November 25, 2019 by laststandonzombieisland 2 comments

I get that haze grey and shades of are great visual camouflage at sea these days, but you just have to love these “throwback” North Atlantic camo schemes that the Royal Canadian Navy is using to celebrate the 75th anniversary of the Battle of the Atlantic.

Look who’s dressed up for Halloween

In an effort to commemorate the upcoming 75th anniversary of the end of the Battle of the Atlantic next May and the Royal Canadian Navy’s role in that epic U-boat war, the Canadian Admiralty has authorised a special paint throwback paint scheme to be carried by the Kingston-class coastal defence vessel HMCS Moncton (MM708) and the Halifax-class frigate HMCS Regina (FFH-334).

While Moncton was repainted first in late August, Regina has been seen at sea earlier this month sporting her new scheme. Here she is seen at sea for sensor trials off Nanoose, and she looks striking. 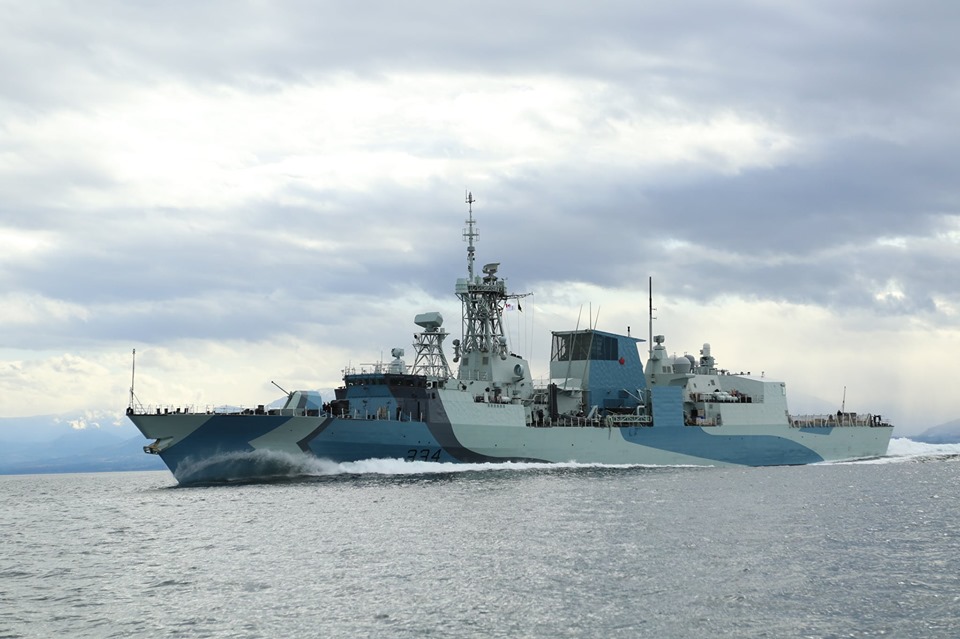 Every warship looks better with a bone in their teeth, but a dazzle pattern is the best… 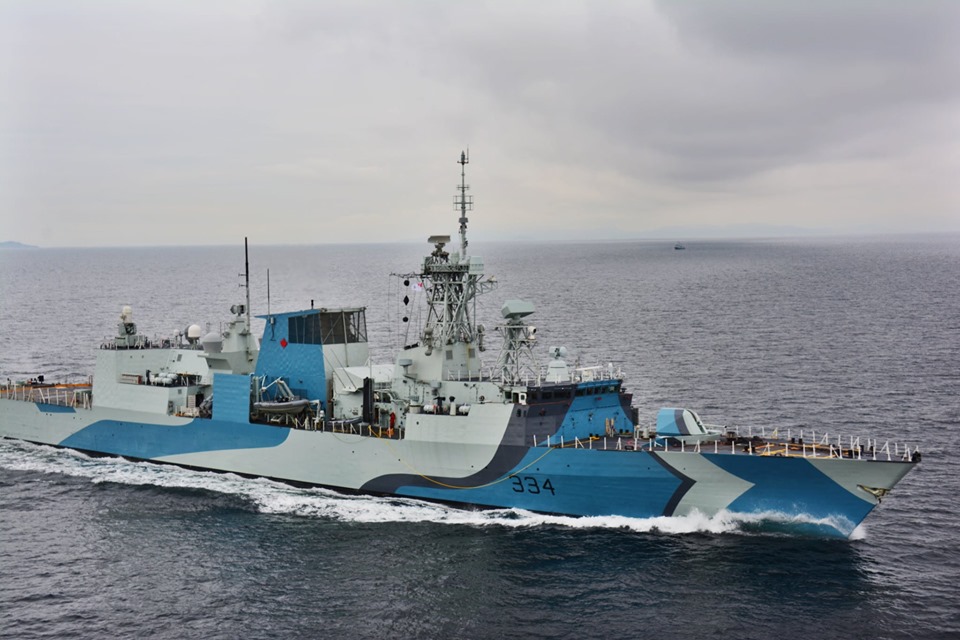 Remembering the Battle of the Atlantic

In an effort to commemorate the upcoming 75th anniversary of the end of the Battle of the Atlantic next May and the Royal Canadian Navy’s role in that epic U-boat war, the Canadian Admiralty has authorised a special paint throwback paint scheme to be carried by the Kingston-class coastal defence vessel HMCS Moncton (MM708) and the Halifax-class frigate HMCS Regina (FFH-334).

During WWII, Canadian vessels escorted over 181 million tons of cargo across the pond, sinking 27 German U-boats in the process as well as accounting for a further 42 Axis surface ships. In return, the Canadians lost 24 ships of their own during the war, along with 1,800 men with hearts of steel. Among the Canadian vessels sent to the bottom was the Flower-class corvette HMCS Regina (K234), torpedoed by U-667 off the coast of Cornwall while the brave escort was busy rescuing survivors of the American Liberty ship Ezra Weston. Regina sank in just 28 seconds, taking a third of her crew to the deep with her.

This, naturally, makes the choice of today’s Regina to carry “the old colors,” a memorable one.