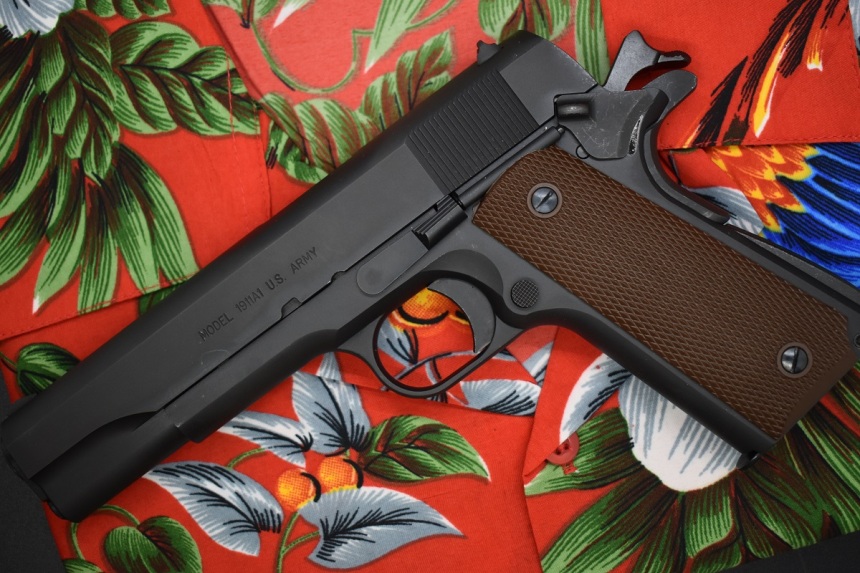 On the outside, it is a dead-ringer for a post-1926 made martial M1911A1. On this inside, it is an 80-series update with arguably a better trigger and tighter tolerances (due to CNC) than the old warhorse.

In range tests so far I have found that it ate 600 rounds of mixed bulk ammo from various makers, run through a hodgepodge of factory and aftermarket mags, with accuracy that is “close enough for Government work.”

Much more details in my column at Guns.com

You do know the Model 1851 Feldstutzer, yes?

From the Hungarian site Kapszli comes a great piece on the Swiss Army’s innovative Model 1851 Federal Rifle, otherwise known as the Feldstutzer or Eidigenössischer Stutzer.

“The Model 1851 rifle at the time of the acceptance was truly the best military rifle of its age. First of all, it fired a much smaller diameter and lighter bullet than any other military rifle. While the French military rifle fired a 17 mm bullet, the American and British a 14.7 mm bullet, the Swiss rifle fired a 10.4 mm bullet weighing only 16.5-17 g. The bullet was pushed from the bore with a relatively high 60-grain charge of fine grade black powder resulting in a 440 m/s muzzle velocity and a flat trajectory.

The flat trajectory was a key feature in Switzerland the soldier had to master shooting downhill and uphill. The Swiss army consisted of free people for many centuries. These civilians were more important to the state than to let them be killed in melee combat so sniping the enemy from a safe distance was always an important element of the Swiss tactics since the introduction of firearms. It is also a reason why the shooting sports have been always so popular in this beautiful little country.”

Born Alejandro Schomburg y Rosa in 1905 in Aguadilla, Puerto Rico– then just seven years removed from the Spanish Empire– the young man who would go on to be called the “Norman Rockwell of Comic books” moved to New York City in the early 1920s. After learning his trade, that of a commercial artist, while working with his three older brothers, he took on standalone work making lantern screen drawings, art, and illustrations for NYCs myriad of comics and pulps including Thrilling Wonder Stories and Flying Aces.

With war in Europe in 1939, sci-fi tech guru Hugo Gernsback, something of the Arthur C. Clarke of his day, enlisted the budding Schomburg for a series of covers of his tech mag Radio Craft and Popular Electronics covering emerging military electronics. 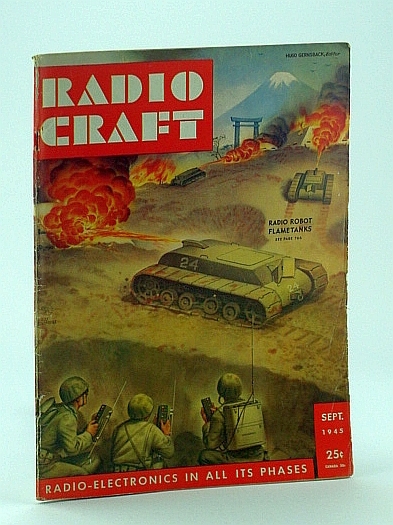 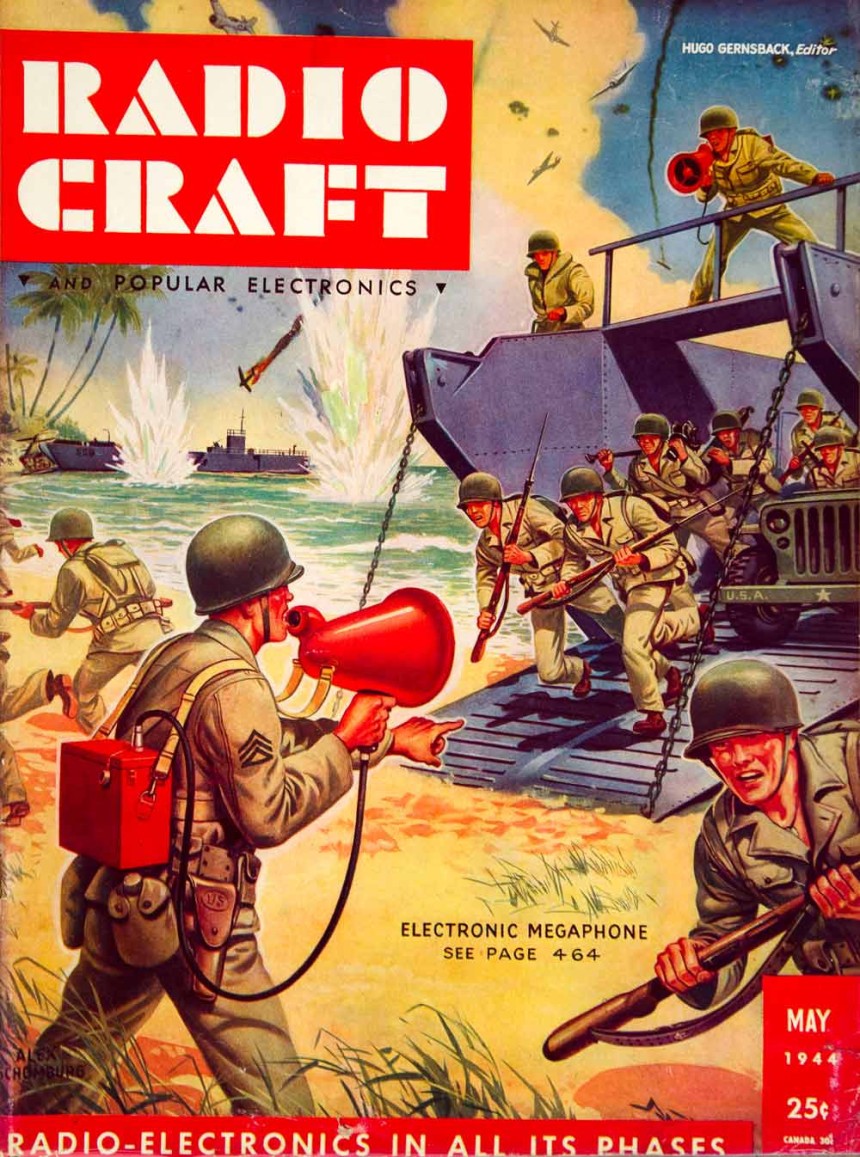 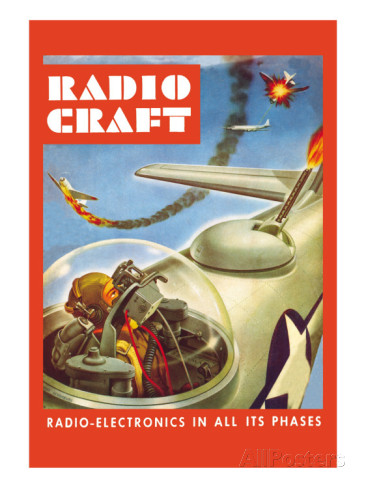 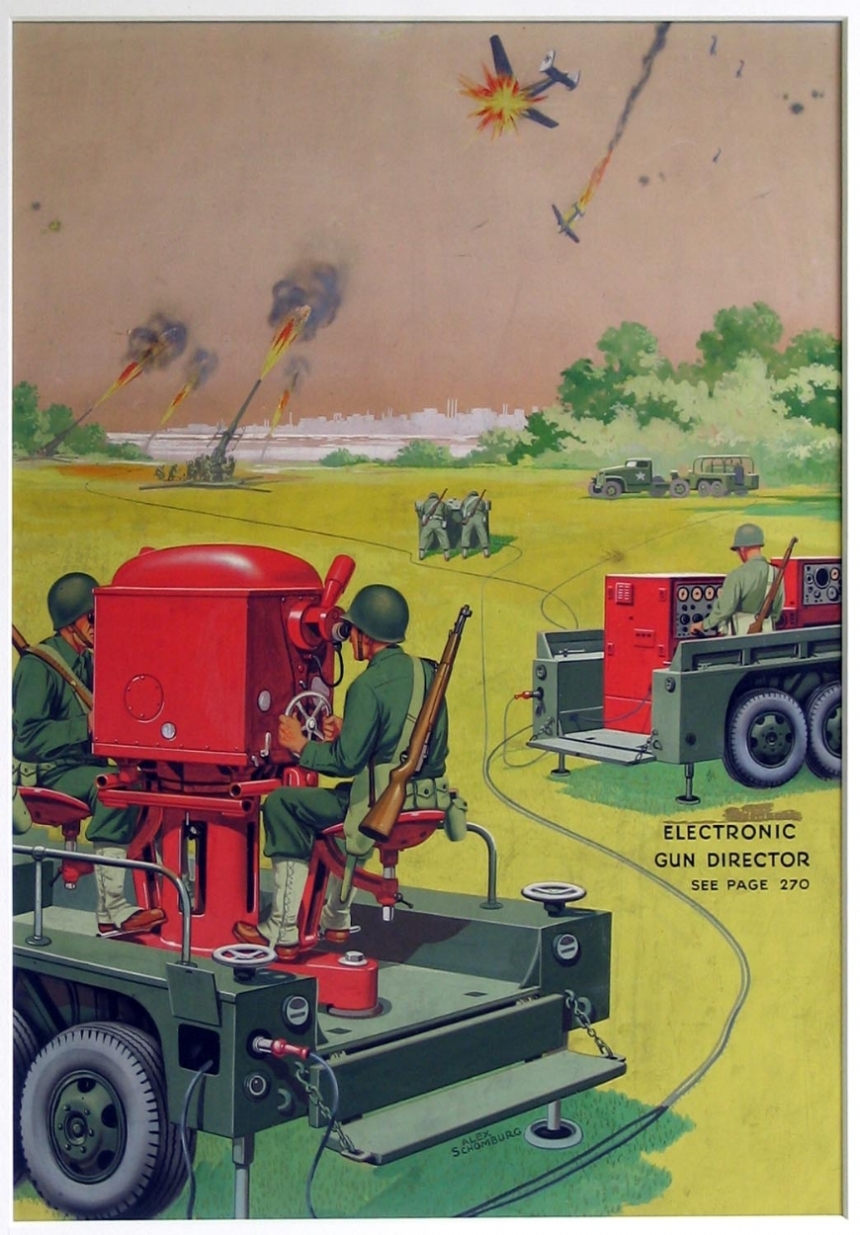 He also worked with Liberty puzzles to make a series of combat tableaus. 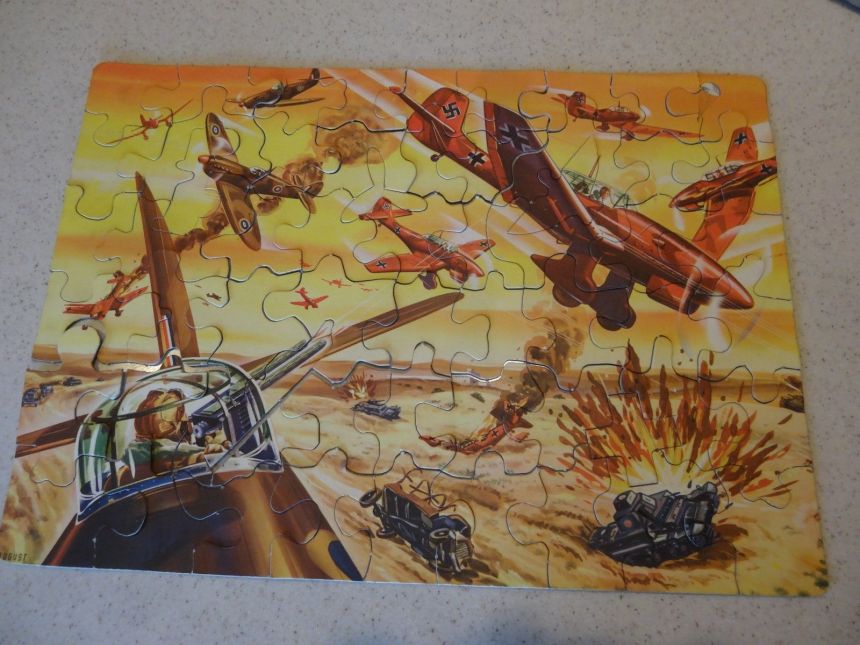 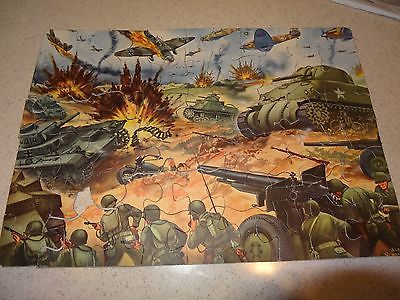 Then, with war firmly gripping U.S., Schomberg took some more “dynamic” work for Timely Comics which largely consisted of American heros slam dunking dirty “japs” and Nazis with a little assistance from their super powers. You see, in that age, there was no need for super villains, and Berlin and Tokyo produced them in real life.

This included Capt.America long before he became a Marvel icon, as well Sub-Mariner, Ka-Zar the Great, The Angel, Black Terror, the Fighting Yank, the Green Hornet and the Human Torch– in just a decade producing something like 600 comic covers alone.

While no doubt cracking reading for its day, they come off rather like propaganda with a skosh of racism when looked at some 70 years later. 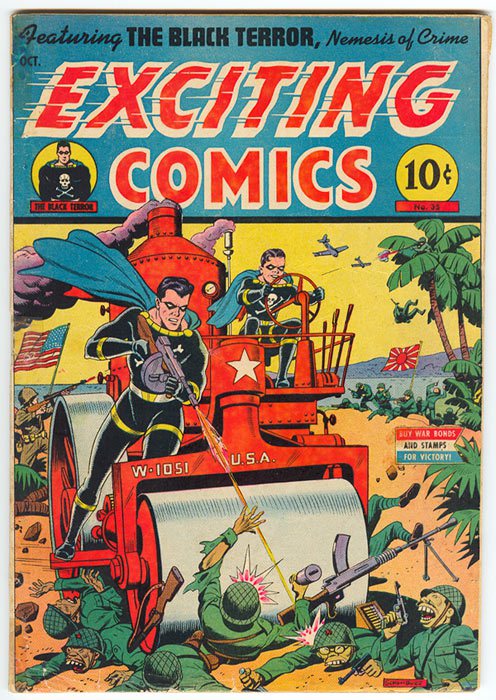 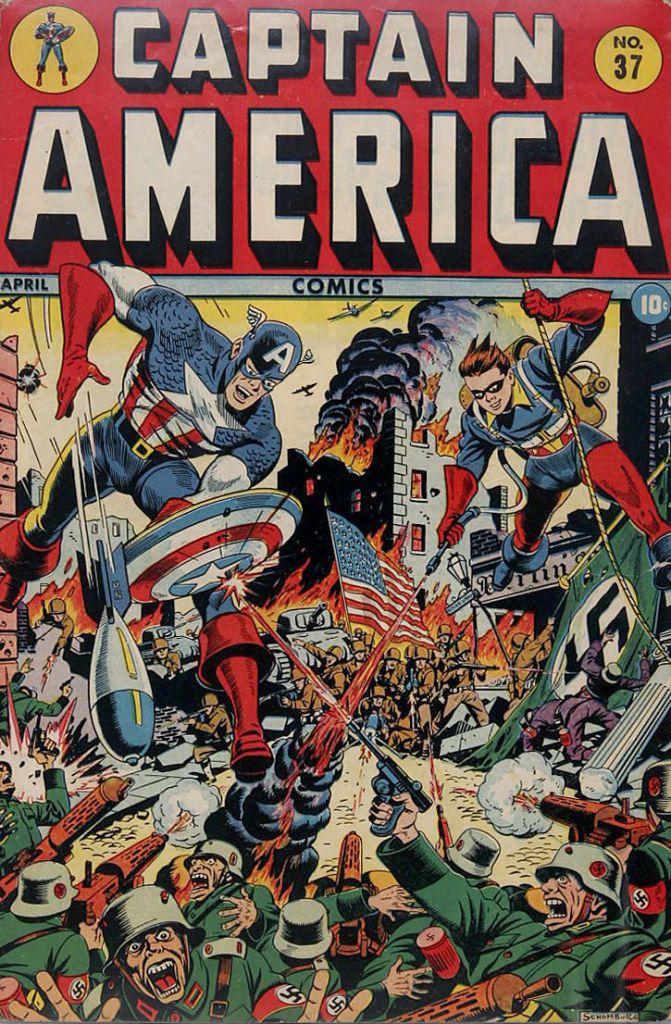 While not an official “war artist” you better believe that most teenage Coasties, Bluejackets, Devil Dogs and Joes had a copy of one of his comics in his sea bag or ruck at one time or another during WWII. The things they carried, indeed.

There’s so much to look at in a Schomburg cover… a compendium of vignettes all worked into one overall scene by The Man Who Made Perspective His Bitch. Seriously… each cover is about the wonkiest perspective possible, often with one character’s upper body in the foreground, and then their lower body in the far distant background, and yet it all works… it all comes together to form a cohesive whole. And that’s why he’s number one. Because he cheated. He was so good he didn’t need to play by the rules.

Eschewing comics, he moved into more sci-fi cover novel cover art which kept him busy the rest of his life and a Hugo award nomination. 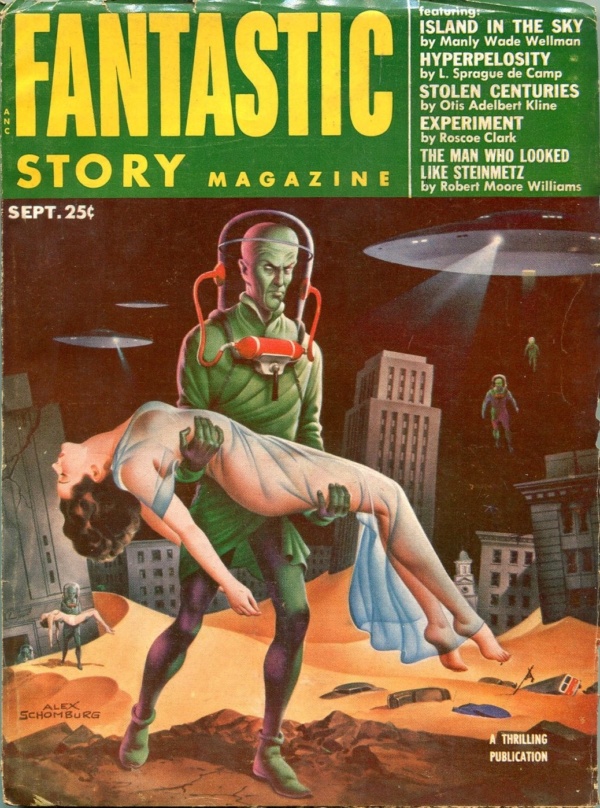 He died in Beaverton, Oregon on April 7, 1998 and there are extensive galleries of his work online at Paul Tobin’s page (who lists him as the No. 1 cover artist in the U.S.) Pulp Covers and Alex Schomberg.com.