Low-level pass of a captured Messerschmitt Me 262 flown by an American pilot in front of General Carl “Tooey” Spaatz, commander of Strategic Air Forces in Europe, 27 June 1945, 75 years ago today. 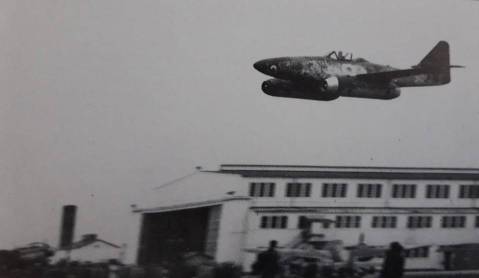 Nicknamed Schwalbe (Swallow), the German jet fighter was first introduced to combat in June 1944, almost a year before VE-Day. Although almost 1,500 were produced and Luffwaffle fighter jocks claimed 500~ air-to-air victories while flying them, mostly against Allied bombers, it was just too little too late and about a third were lost on the ground or to RAF Spitfires and USAAF P-51s, who were still superior to the Schwalbe in dogfights.

Only about a dozen exist around the world today, typically captured aircraft that, like the one above, were tested by the Allies seeking lessons in the next generation of fighters such as the F-86.