The saga of the seasick US Army Piper Cubs on the Navy’s smallest aircraft carriers.

Posted on May 31, 2014 by laststandonzombieisland 2 comments

During World War 2, like most red-blooded Americans, the Piper J-3 Cub was called to serve in the military. Classified as the L-4 by the Army but most commonly called “Grasshoppers,” more than 4900 were used to help spot and correct the fall of artillery shells over enemy lines and otherwise help coordinate troops. Well, it turned out that the Army needed these planes in some pretty inaccessible places, and that’s where the Navy came in.

During the first part of World War 2, the Allies were on the defense, falling back and able to use their local airfields to house and feed their planes of all types. Then in 1943, the tide soon turned as the Allied forces in the Pacific, starting at Guadalcanal, as well as in the European theater, with the invasion of Sicily, started taking the war to the Germans, Japanese, and Italians. It was in these invasions, however, that the Army soon realized that their fleet of small, fixed-wing L-4 Pipers and L-5 Stinsons were out of service until airfields could be captured or built in these new areas. This put the generals on the ground blind and reliant on long-range reconnaissance aircraft and Navy planes to provide their eyes.

However, there soon became a fix for this in place.

In late 1943, an Army Transportation Corps Captain by the name of James H Brodie was busy with a solution. Stationed in New Orleans and detailed to work supervising the loading of cargo ships with war materials, he sketched out a design for a boom and line system with a release that could hold a small aircraft fitted with a corresponding hook along the top of the wing roots. With the boom, a small plane (Cub!) could be lifted into the air, then the engine worked up, and, when rpms were high enough to be reasonably sure of lift, released to fly away. To land, the system worked in reverse, capturing a passing hook-equipped Grasshopper by wire and allowing it to spin down.

Of course, we all know that the Cub is a tail-dragger, and to make that three-point landing pilots pull the stick into their belly. However, doing this on the hook just north of that 38-ish knot stall speed took some getting used to. 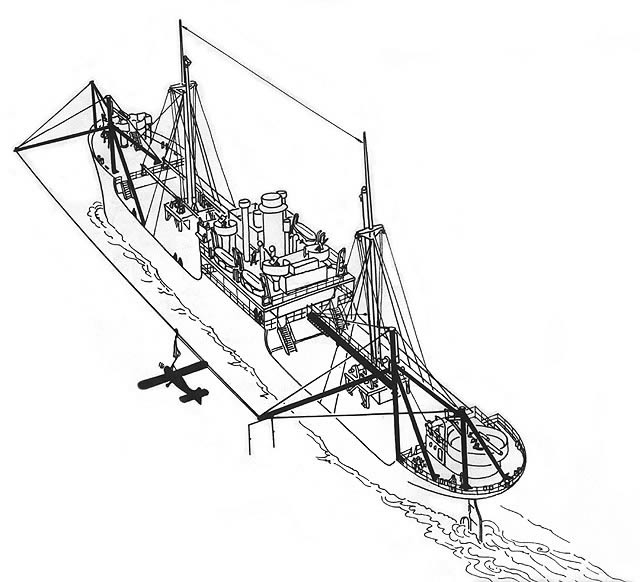 The Brodie System was invented during World War II. A pilot could take off or land with the aircraft hooked to a trolley that ran along a cable. On landing, the trolley provided braking for a smooth stop. The cable and trolley could be rigged on very short jungle fields, or even on ships. This picture shows how a light aircraft could take off or land on a ship using the cable. Image Credit: National Air and Space Museum, Smithsonian Institution NASM-9A001183

In this picture, a Piper L-4, engine running, is ready for take-off while suspended from its cable. Image Credit: National Air and Space Museum, Smithsonian Institution Image Number: SI83-16835

This meant that by using Brodie’s system, a Cub or Stinson could be launched and recovered in a very small area, without a landing strip, allowing it to operate from a clearing, a small field, or even the deck of a medium-sized ship.

The Navy had by early 1944, several hundred ships they classified as “Landing Ship, Tank.” These purpose-built vessels were built to carry several hundred tons of cargo, as well as vehicles and up to 160 or so soldiers or marines into combat, landing them on the beach where giant doors would open up and spit them out onto the sand. The Navy built so many of these ships, so fast, that they didn’t even bother to name them although they were some 328-feet long and crewed by 7 officers and 104 sailors. As such, they just had numbers, such as USS LST-16, etc.

Big blue had enough of these LSTs around that they agreed to allow the Army to use a few of them in 1944 as tiny aircraft carriers. While L4s and L5s had flown off big deck Navy carriers earlier in the war, the Navy really didn’t like Army planes on their flattops, so the arrangement worked out nicely.

The idea would be that 6-10 small Cubs or Stinsons would be loaded on an LST, modified with a 220′ x 16′ flight deck. From the top of this tiny ersatz carrier, they would take to the sky over an invasion beach, scout out enemy locations, and call artillery strikes in on said bad guys. Once the GIs moved inland and acquired access to more real estate, especially airfields, the grasshoppers could leave their LST behind and relocate to drier accommodations.

One ship, LST-906 was ready for the invasion of southern France in September 1944, Operation Dragoon and she launched her Grasshoppers in the air with her nose pointed into the wind and a full 10-knots built up on her twin diesels.

“Here is the photo of LST-906 with Capt. Alfred “Dutch” Schultz as the pilot of ‘Janey’ the L4B Piper Cub artillery spotting plane. This information comes from Dutch Schultz’s book “Janey: A Little Plane in a Big War”. Dutch was the Pilot of the plane that my Dad flew in and took pictures for the 3rd Division. I met him last year and he remembered my Dad from more than 55 years ago. The Seabees converted the LST-906 into a homemade aircraft carrier, which was used in the Invasion of Southern France at St. Tropez.” Image credit: Rich Heller, Webmaster The Society of the 3rd Infantry Division, U.S. Army

USS LST-906, with US Army Air Force L-4 Grasshopper on her flight deck being prepared for take-off. Note additional L-4 type aircraft stowed alongside the deck. How would you like to take off on that flight deck? Talk about getting it right the first time. Image credit: US Army Signal Corps photo. 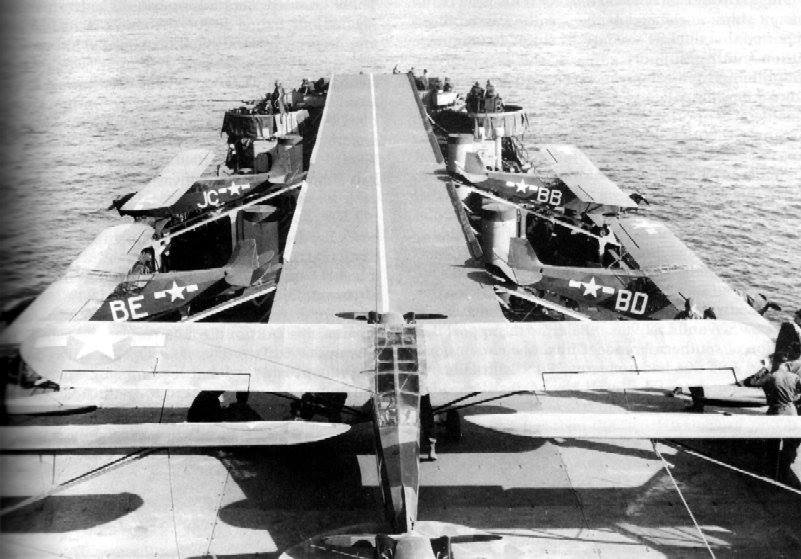 USS LST-16 is underway in the Mediterranean area. Note the USAAF L-4 Grasshopper on the 220ft x 16ft flight deck ready for take-off. US Navy photo from “Aircraft Carriers” by Norman Polmar. 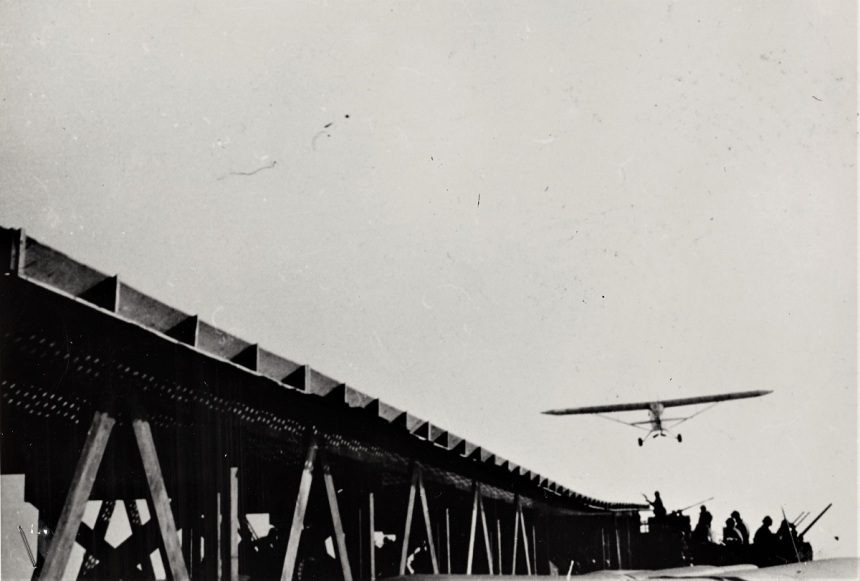 One early ship, USS LST-386, had only a small 210×10 deck with a 1-foot step board around it and no Brodie system and was the first of the “L-Bird carriers” to see operational service. 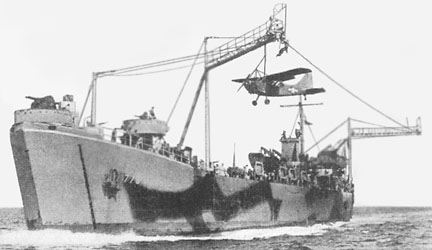 On some ships, the Grasshoppers would take off once and land ashore at a location that had been captured and designated. While this was not ideal, it did get the small planes ashore and ready to operate rather than land them in boxes and reassemble them on the ground. As the L-4s only had a useful combat radius of about 75-nm, this was done pretty soon.

They proved themselves off Italy, France, the Philippines, and later, Okinawa and Iwo Jima.

Moreover, we thank them for their sea-going service as the Army’s unsung fleet of carrier-based airplanes.

I originally published this at the J-3 Cub Club.