Posted on July 16, 2014 by laststandonzombieisland 6 comments

Here at LSOZI, we are going to take off every Wednesday for a look at the old steam/diesel navies of the 1859-1946 time period and will profile a different ship each week. These ships have a life, a tale all of their own, which sometimes takes them to the strangest places.

Here we see the United States Coast Guard Treasury-class cutter USCGC Spencer (W36/WPG-36/WAGC-36/WHEC-36) as depicted in a painting by CWO3 William ‘Bill’ RaVell, USCG Ret. . CWO3 RaVell is an artist and member of the International Society of Marine Painters in addition to being a crew member on the USS Spencer between 1959 and 1961.

Officially known as the “Treasury” class due to the fact the 7 ships in the group were all named after former early secretaries of the U.S Treasury (the department that the Coast Guard reported to until 1972), they were better known simply as ‘327’ ships due to their overall length. Based on the Erie-class (PG-50) gunboats of the U.S Navy, a group of just two ships designed to patrol the far-flung Panama Canal Zone before WWII, these coast guard cutters were the largest and most heavily armed ships in the Treasury fleet up until that time. 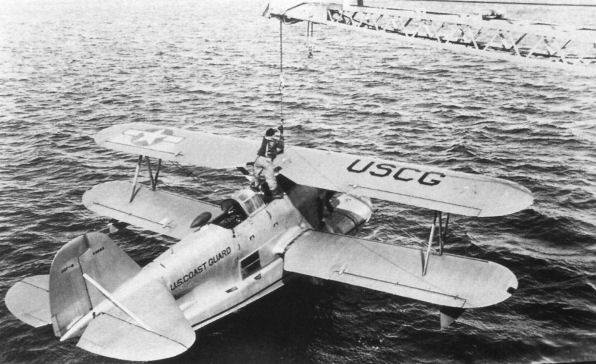 Grumman JF-2 Duck being deployed from a cutter. Two were carried experimentally on board the 327s Spencer and Taney during pre-war tests. The Coast Guard obtained 14 JF-2s prior to WWII designed specifically for the service and a number of J2Fs during WWII. Of the first batch, they were acquired in October of 1934 and carried Coast Guard numbers V-135 through V148.

Laid down in 1935 at the New York Navy Yard, Spencer was commissioned into the USCG on 1 March 1937 with a total building cost of  $2,468,460. She was named after former Secretary of the Treasury John Canfield Spencer, who served in President Tyler’s administration. An earlier Civil War-era Revenue Cutter was also named after Spencer.

Sent to patrol the Alaskan fishing grounds, Spencer embarked meteorologists from the Weather Bureau (this is pre-NOAA) and performed weather station observations in both the Pacific and the Atlantic. Then in November 1941, with the threat of war looming, she reported for duty with the U.S. Navy  Quickly, she was armed with an three 3-inch AAA DP guns, depth charge racks, and a “Y” gun depth charge projector as well as an increasingly advanced array of senors for finding enemy ships and submarines.

She was going to need them. 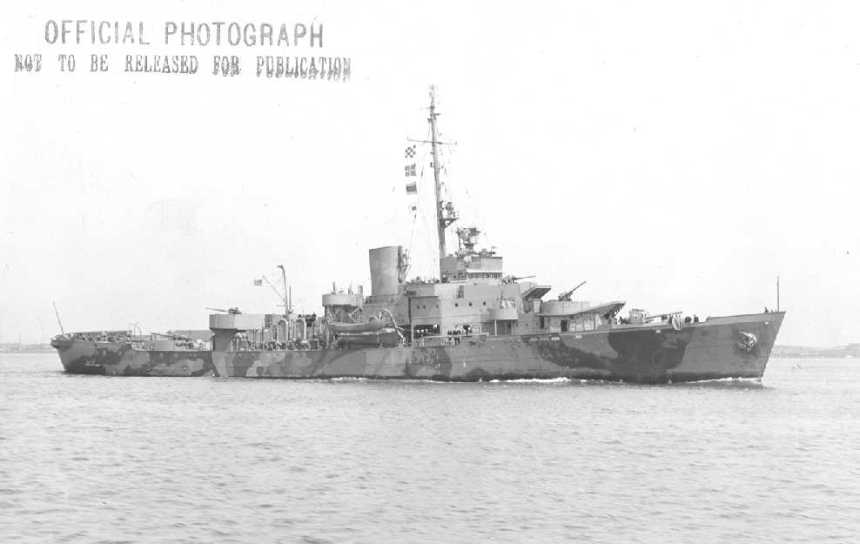 Spencer with her teeth in and her warpaint on.

By February 1942 she was escorting the first of no less than 18 huge trans-ocean convoys as part of Mid-Ocean Escort Force (MOEF)-A3. This force often tasked with protecting dozens of merchantmen carrying troops and vital supplies consisted of the destroyer Gleaves, Spencer, and Flower-class corvettes Bittersweet, Chilliwack, Shediac and Algoma.

These runs were often terrifying. Convoy ON 67 in February 1942 lost 7 ships to wolf packs of multiple U-boats. During Convoy SC.100, a slow-ship run from  Sydney, Cape Breton Island to Liverpool with 26 merchant ships, the escorts fought off attacks from two complete wolf-packs totaling 17 U-boats. SC-121 fought off attacks from 27 submarines. It was only the fact that the Spencer and her associates constantly rushed to every HF/DF, sonor, radar and lookout contact, dropping depth charges and curses that these convoys made it at all. During this time her armament was increased with the addition of a Hedgehog system, 6 “K” gun projectors, and a number of 20mm AAA guns.

On 17 April, while a part of convoy HX-233, no less than seven U-boats converged on the group of ships in the mid-Atlantic gap, the area of the ocean too far from land to be covered by either U.S. or European-based anti-submarine aircraft. Stopping to pick up survivors of the torpedoed freighter Fort Rampart, Spencer found the German Type VII-type submarine U-175 sitting at periscope depth just 5000-yards from the convoy, lining up her tubes on the Allied vessels.

Official Caption: “NAZI SUBMARINE SUNK BY THE FAMED CUTTER SPENCER: Effect of the U.S. Coast Guard Cutter SPENCER’S fire are visible in this closeup shot of the U-Boat, taken as the battle raged. The Nazi standing by the stanchion amidships disappeared a moment after this picture was taken by a Coast Guard photographer. The U-Boat had been trying to sneak into the center of the convoy.” Date: 17 April 1943 Photo No.: 1512 Photographer: Jack January? Description: The “Nazi” mentioned in the above caption was probably, in fact, a member of the Coast Guard boarding team–one of the first Americans to board an enemy man-of-war underway at sea since the War of 1812.

Official Caption: “OFF TO RESCUE THEIR BEATEN FOES: A pulling boat leaves the side of a Coast Guard combat cutter to rescue Nazi seamen struggling in the mid-Atlantic after their U-Boat had been blasted to the bottom by the cutter’s depth charges. Two Coast Guard cutters brought 41 German survivors to a Scottish port.” Date: 17 April 1943 Photo No.: 1516 Photographer: Jack January Description: The men in this pulling boat were, in fact, a trained boarding team led by LCDR John B. Oren (standing in the stern and wearing the OD helmet) and LT Ross Bullard (directly to Oren’s left). With the assistance of the Royal Navy they had practiced boarding a submarine at sea in order to capture an Enigma coding machine and related intelligence material.

In addition to this confirmed kill, Spencer has been credited by some sources as being credited off and on in the sinking of U-529 and U-225 as well as damaging several others.

Spencer was not the only 327 to make a kill. With a kill rate of .57 per ship, the Treasury-class were the most successful antisubmarine warships of World War Two. (US Navy Destroyer Escorts had a kill rate of .1 in comparison).

By early 1944 the submarine war in the Atlantic was all but decided and the 327s were reclassified as Communications Command Ships for Amphibious group leaders and Spencer was transferred as such to the Pacific with the 36th Signal Detachment Headquarters Company, U. S. Army stationed aboard. 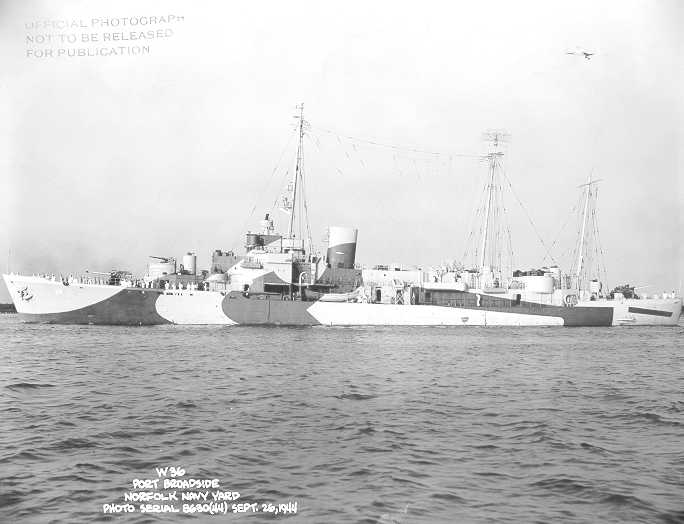 Norfolk Sept 1944, a hard war already behind her, she is now headed to the Pacific.

There, re designated as WAGC-36, she arrived in the Philippines and participated in the landings at Palawan, Moro Gulf, Mindanao, Parang and Luzon where she had often had  LTGEN  R. L. Eichelberger, Commanding General, 8th Army, and MAJGEN Swing, commanding general, 11th Airborne Division on board during the landings. She then sortied south to assist in landings in Borneo. She ended the war shooting at floating naval mines off China and was ordered to sail back to the states 5 December 1945.

Her armament reduced, excess wartime equipment removed, and paint scheme returned to white, she was back in service off the Eastern seaboard with the Coast Guard by 1946, alternating home ports for the next thirty years between New York City (Governor’s Island) and Boston. 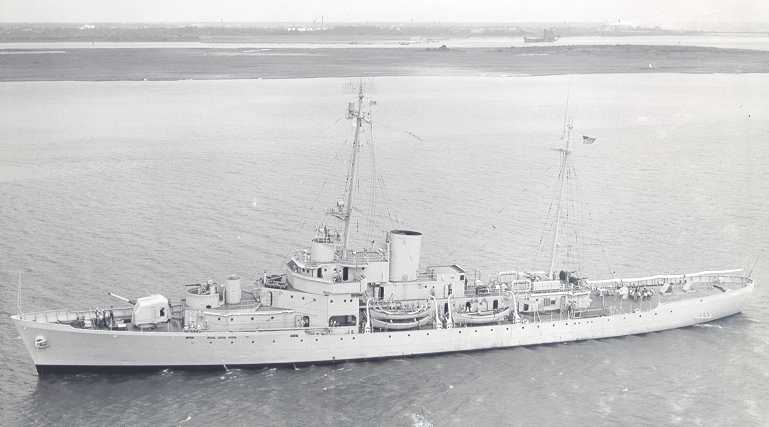 Back in white, with a new 5″/38 mount and almost everything else war-related stripped away.

In 1965 she was overhauled and redesigned WHEC-36 (High Endurance Cutter). Then in 1969, the 32-year old war veteran was sent to South Vietnam as part of CG Squadron Three as part of the Tonkin Gulf Yacht Club interdicting NV/Viet Cong junks along the coast. For nine months she tracked and boarded contacts, captured 52 enemy suspects, and answered 13 naval gunfire close support fire missions, bombarding NVA targets ashore.

Then, as after WWII, she returned home to other rounds of peacetime service. Finally, her hull aging and equipment worn out, she was docked in 1974 in semi-retirement, used as a floating Engineer Training School until 1980, when she was finally retired after 43 years of service.

During her wars, she accumulated a vast array of awards and has been described as the most decorated of all Coast Guard cutters. These include a Presidential Unit Citation, 10 campaign medals for ETO and Pacific Theater operations in WWII, 3 Vietnam Service Medals, 3 Philippine Liberation Ribbons and the Republic of Vietnam Meritorious Unit Citation with Gallantry Cross with Palm.

In 1981 she was sold for $27,000, her value as scrap, to a company in Delaware. However, two of her sister ships, Taney (currently a museum ship at the Baltimore Maritime Museum) Ingham (Key West Maritime Museum in Key West, Florida) are preserved for you to visit– so please do.

Spencer‘s memory is preserved in a Bear-class 270-foot WMEC  as well as a very well-organized veterans association.

The International Naval Research Organization is a non-profit corporation dedicated to the encouragement of the study of naval vessels
and their histories, principally in the era of iron and steel warships (about 1860 to date). Its purpose is to provide information and a means
of contact for those interested in warships.

Nearing their 50th Anniversary, Warship International, the written tome of the INRO has published hundreds of articles, most of which are
unique in their sweep and subject.