Just heading out for a little Dshk Gun or two 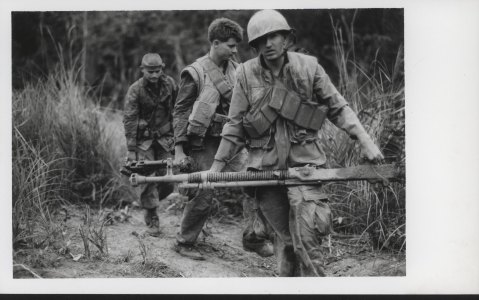 For reference, Dushka weighs 75-pounds without any ammo or mounts, so PVT. Covington, who is humping that hefty girl solo in the top picture while still carrying bandoliers and field gear, is truly a man amongst men.

Who wouldn’t want a 12mm Rocket Launcher at their side?

Invented about the same time as The Jetsons were a hit TV show, nuclear weapons researcher Bob Mainhardt and arms designer Art Biehl came together to form MB Associates (after their initials) to explore rocket projects. In addition to a reasonably popular handheld flare projector, they also looked to produce a series or rocket-firing weapons with an eye towards military contracts.

I give you, the Gyrojet Rocket Pistol, which is a real thing that actually saw some limited use in Vietnam.

Official caption: TURKEY TIME—Lance Corporal Walter R. Billetdeoux (Johnstown, PA) takes a healthy bite from a turkey leg on Thanksgiving Day in Vietnam. Sitting in a foxhole on the front lines, just outside of Da Nang, the combat-clad Marine is enjoying his first hot meal in more than two weeks. LCpl Billetdeoux is a member of L Company, 3d Battalion, 9th Marines. 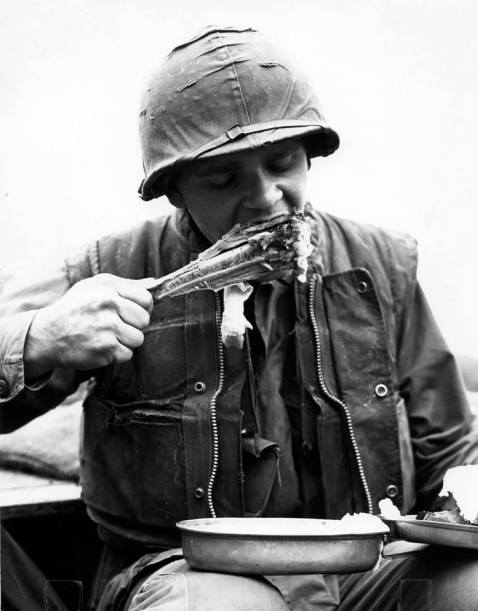 Via U.S. Navy in the Vietnam War: In a scene that looks more like Burma in 1945 than Indochina in 1965, EN1 Carl L. Scott, an advisor to the Vietnamese Coastal Junk Force, stands in front of members of his team in this photo. 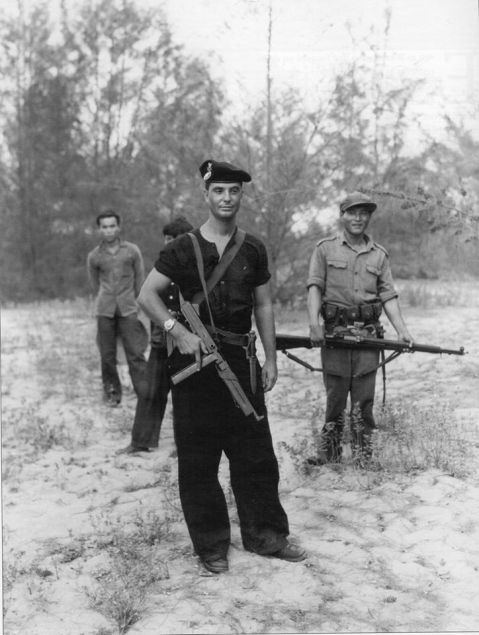 Note that EN1 Scott is wearing the authorized Junk Force beret and insignia along with common black “pajamas” worn by many of the Vietnamese, and carries a late WWII-era M1A1 Thompson submachine gun. Also, note the South Vietnamese with an M1 Garand and 10-pouch belt.

While the U.S. Army and Marines rarely used the Chicago Typewriter in Southeast Asia, typically only scoring occasional examples while working with ARVN units who had received them along with M1 Carbines and Garands as military aid, the Navy and Coast Guard utilized Tommy guns extensively in their brown water war, especially in the 1960s.

Gun locker in the cramped galley of the 82-foot Coast Guard Cutter Point White (WPB-82308) in Vietnam. A lot of tasty vittles there!

From NHHC on the Junk force:

Recognizing that the sea was a likely avenue of approach for Communists infiltrating from North Vietnam or moving along the South Vietnamese littoral, in April 1960 the navy established the paramilitary Coastal Force. In line with its emphasis on counterinsurgency warfare, the Kennedy administration wholeheartedly endorsed the development of this junk fleet, providing the force with American naval advisors, boat design and construction funds, and stocks of small arms. By the end of 1964, the 3,800-man, 600-junk force patrolled the offshore waters from 28 bases along the coast. To coordinate the operations of these 28 separate divisions, U.S. advisors helped set up coastal surveillance centers in Danang, Cam Ranh, Vung Tau, and An Thoi, the respective headquarters of the 1st, 2d, 3d, and 4th Coastal Districts.

Personnel problems proved equally vexing. Although authorized almost 4,000 men, the Coastal Force often fell short by 700 to 800 men. Lacking the prestige of the other combat branches and with its men underpaid and isolated in austere bases, the junk force had great difficulty recruiting personnel, especially those with technical knowledge. Further, only a few of the coastal group bases created formal training programs to increase the skills of those men enlisted. Encouraged by U.S. naval advisors, the Vietnamese Navy took limited steps in late 1967 and 1968 to improve the training effort and to better the living conditions of the junkmen, but much remained to be done.

Remember, today is not about saving upto 20% on select merchandise

In November 1919, President Wilson proclaimed November 11 as the first commemoration of Armistice Day with the following words

To us in America, the reflections of Armistice Day will be filled with solemn pride in the heroism of those who died in the country’s service and with gratitude for the victory, both because of the thing from which it has freed us and because of the opportunity it has given America to show her sympathy with peace and justice in the councils of the nations…

Newport News would return to Yankee Station two more times before she was decommissioned in 1975, the last all-gun heavy cruiser in US service. She was scrapped in 1993.

This Springfield Armory layout from 1961 shows a then-current uniform of a Captain in the U.S. Army Air Defense Artillery with a new M14 rifle and jungle boots coupled with a view of World War II-era army uniform and one from the Spanish-American War.

The SpanAm War shot includes the iconic U.S. M1892 Krag along with the khaki 1889 Pattern campaign hat and 1898 Pattern blouse.