A Thousand Kingfishers can’t be wrong

Back before the days of helicopters, the naval seaplane was king for over-the-horizon spotting.  This included missions such as scouting for enemy ships, keeping up with the fleet, picking up those lost at sea, light transport of personnel and packages from ship to ship and ship to shore, as well as the all-important task of correcting distant naval gunfire missions.

The Navy used Curtiss CS-1 biplanes, Grumman Ducks, Vought O2/O3 Corsairs, and the Curtiss SOC Seagull through the 1920s and 30s (and in the Duck’s case even into WWII) for this task.

The U.S. Navy heavy cruiser USS Chicago (CA-29) at the Mare Island Naval Shipyard, California (USA), in 1931 (looking aft from the top of the forward fire control station). Note the Vought O3U-1 Corsair floatplanes on the catapult deck. Cruisers in the U.S. Navy often carried as many as 5-6 aircraft between on-deck storage and their hangar (NH70721) 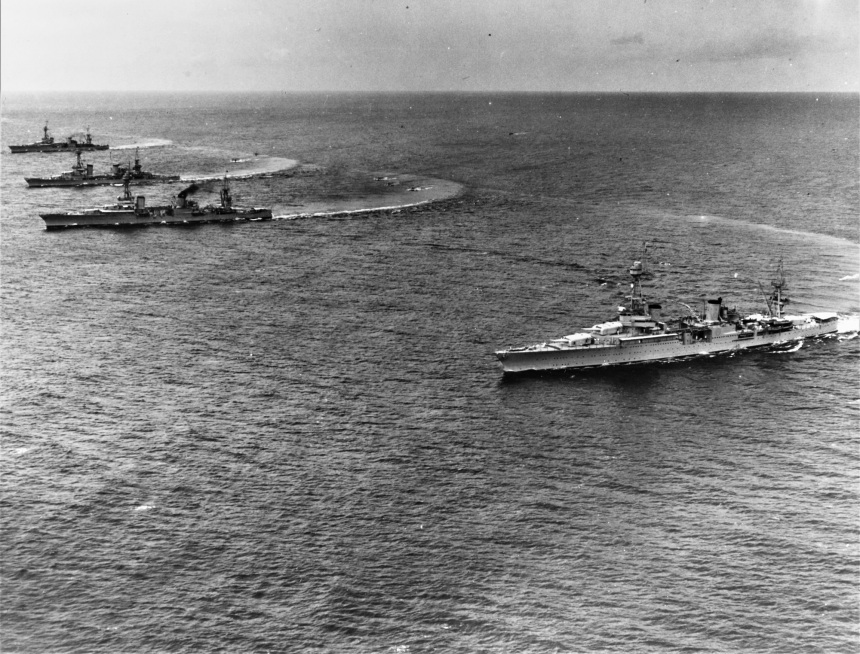 In 1938 the new Vought OS2U Kingfisher, a mid-wing monoplane with a large central float and two outriggers had been introduced to take their place. These slow (160kts) and unwieldy scout planes were not built for combat. Rather, they served as the eyes and ears of the fleet.

OS2U-3 Kingfisher at the edge of the seaplane ramp at NAS Pensacola, Florida, United States, 1942. Note Consolidated P2Y flying boat laying off shore. Note the ladder/gangway. These planes were tall! (Click to big-up)

Launched by catapult from ships as small as light cruisers, they gave a tiny air wing to even the most modest of ships. Some cruisers were set up to carry as many as four of these planes. 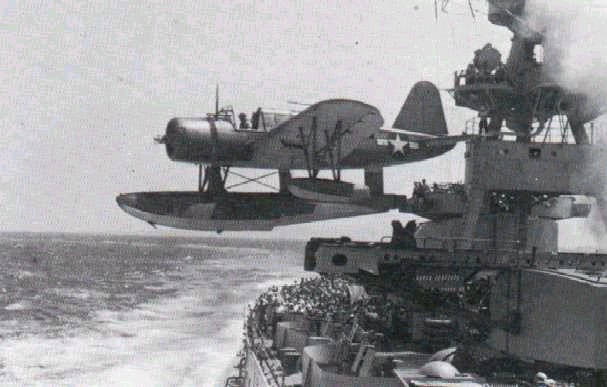 A Kingfisher being launched from the Cat of the USS Pringle (DD-477). One of the few 2000-ton Fletcher class destroyers equipped for these aircraft.

They had long legs, capable of a range of some 800 miles. If needed they could carry 650-pounds of bombs which made them useful against lightly defended targets (such as Japanese freighters).

Perhaps more than any other aircraft save the long-legged PBYs and PBMs, Kingfishers saved more down aircrew during the war from being lost forever at sea “somewhere in the Pacific” 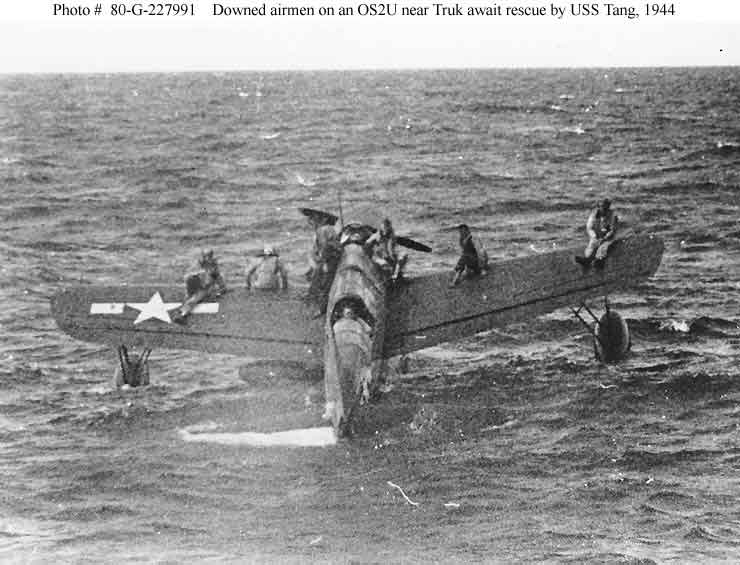 Over 1500 were produced and served the U.S. and her allies as late as the 1960s. They were so successful in fact, that the follow-on and much more heavily armed and fighter-like Curtiss SC Seahawk that replaced it in Navy service was itself phased out in 1949. Killed by the advent of the helicopter and long-range surface radar.

The Vought OS2U Kingfisher that appears here on the Missouri (BB-63) shakedown cruise was taken after an abandon ship drill in August 1944. (Click to embiggen) 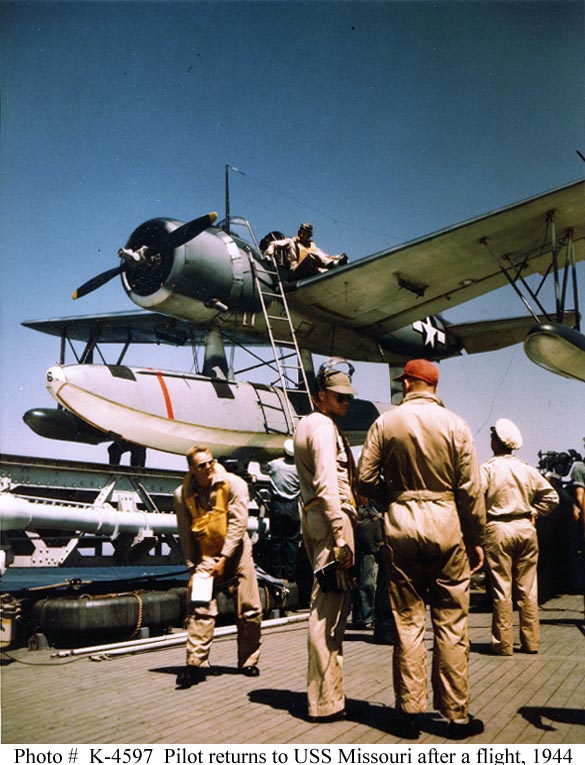 The pilot of a Vought OS2U floatplane unstraps his flight log from his leg, after returning from a flight. The airplane is on the catapult behind him. Photographed during the ship’s shakedown cruise, circa August 1944. Official U.S. Navy Photograph, USNHC # 80-G-K-4597, now in the collections of the U.S. National Archives.