Posted on May 13, 2015 by laststandonzombieisland 6 comments 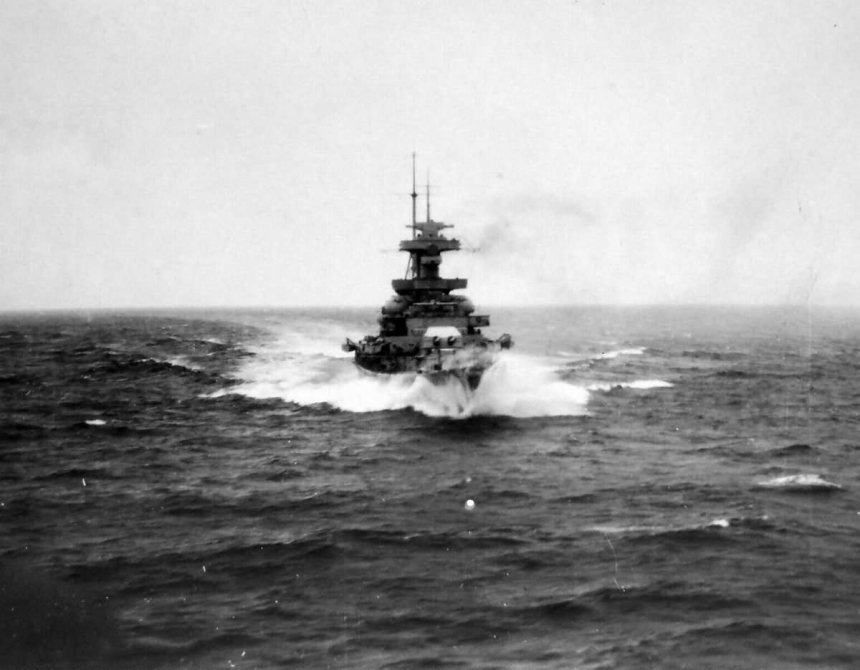 Here we see the pride of the German Kriegsmarine, class leader schwerer-kreuzer Admiral Hipper underway at sea. Between April 1940 and Feb. 1943, she would haunt the Atlantic Ocean and North and Barents Seas, sending a number of His Majesty’s warships and merchantmen to the cold embrace of the deep.

With the Kaiser’s High Seas fleet lining the bottom of Scapa Flow, the language of the Versailles Treaty allowed the remnant of post-Imperial Weimar Germany just six obsolete pre-dreadnought battleships and six old light cruisers of the Bremen and Gazelle class in their Reichsmarine— which could not be replaced until they were at least 20-years old. Once these elderly cruisers started to wear out, the Republic replaced them with the larger Emden, Leipzig, and Konigsberg-class vessels from the late 1920s onward.

Then in 1933, when Hitler kicked the Versailles agreements to the curb, the Reichsmarine started construction on the super-sized Deutschland-class cruisers (pocket battleships) which needed escorts who could travel the world on their own if needed– and thus were born the first modern German heavy cruisers.

Allowed 50,000 tons of this last type under a pact with their Brits in 1935, the Germans went about building five, (wink wink) 10,000-ton ships for their newly renamed Kriegsmarine. The first of these, ominously, was named for the head of the Kaiser’s Great War fleet, Admiral Franz Ritter von Hipper.

(The man), he died in 1932, before the cruiser bearing his name was even fully designed on paper

Known politely in Great Britain and the “baby killer,” Hipper commanded the battlecruisers of I Scouting Group on the raids on Scarborough, Hartlepool and Whitby; the Battle of Dogger Bank; and, of course, Jutland– where his unit drew the most blood of any, before taking the helm of the overall fleet from Scheer in 1918.

Although on paper they were supposed to weigh in at 10,000-tons, these 665-foot long cruisers were no welterweights, stepping on the scales with a full load displacement of over 18,000 when in wartime service. 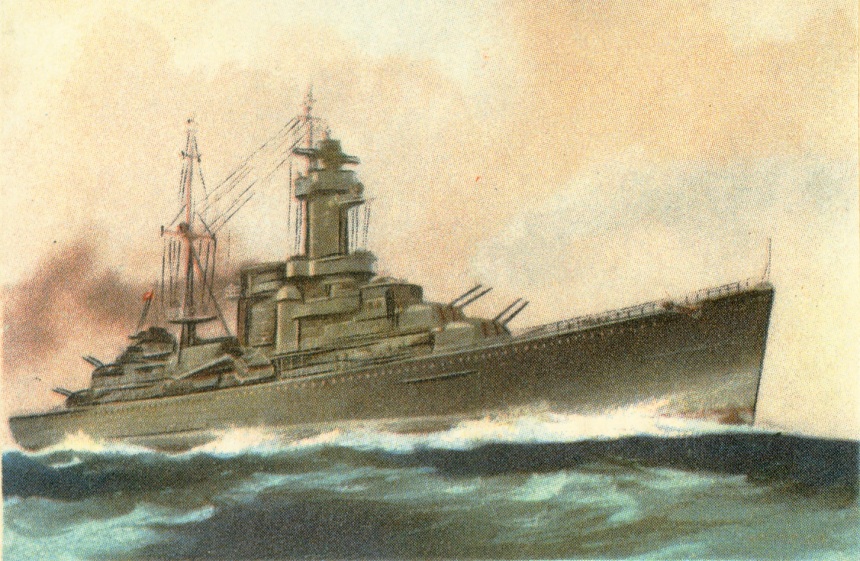 Sheathed in a belt that averaged about 3-inches, they weren’t made to fight battleships, but their battery of eight 20.3 cm/60 (8″) SK C/34 guns, capable of firing a 269-pound AP shell out to a very respectable 36,636 yards, they could penetrate more than 9.4-inches of face-hardened armor at up to 10,000. As such, they could slug it out with any warship but a battlewagon with high hopes of winning the day. 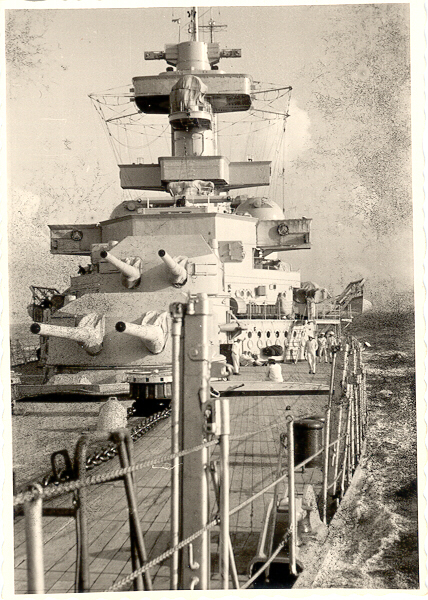 In all some five ships were to be completed of the class: Hipper, Blücher, Prinz Eugen, Seydlitz, and Lutzow, but the war had other plans.

The anti-hero of our story, Hipper, was laid down 6 July 1935 at Blohm & Voss in Hamburg and commissioned in the spring before the Second World War began on April 39, 1939.

Just finished with her shakedown cruises, she sortied with virtually the entire Kriegsmarine to Norway where she was a group flag for Operation Weserübung, the invasion of that country in April 1940. (It was during that operation that her sister, the brand-new Blücher, was sucker punched and sunk by a Norwegian torpedo battery)

It was there, off the frozen coast just before the operation began, that she encountered the 1,900-ton G-class destroyer HMS Glowworm. The epic tale of what happened is as follows:

On the 8th April 1940, H.M.S. Glowworm was proceeding alone in heavy weather towards a rendezvous in West Fjord, when she met and engaged two enemy destroyers, scoring at least one hit on them. The enemy broke off the action and headed North, to lead the Glowworm on to his supporting forces. The Commanding Officer, whilst correctly appreciating the intentions of the enemy, at once gave chase. The German heavy cruiser, Admiral Hipper, was sighted closing the Glowworm at high speed and an enemy report was sent which was received by H.M.S. Renown. Because of the heavy sea, the Glowworm could not shadow the enemy and the Commanding Officer therefore decided to attack with torpedoes and then to close in order to inflict as much damage as possible.

Five torpedoes were fired and later the remaining five, but without success. The Glowworm was badly hit; one gun was out of action and her speed was much reduced, but with the other three guns still firing she closed and rammed the Admiral Hipper. As the Glowworm drew away, she opened fire again and scored one hit at a range of 400 yards. The Glowworm, badly stove in forward and riddled with enemy fire, heeled over to starboard, and the Commanding Officer gave the order to abandon her. Shortly afterwards she capsized and sank. The Admiral Hipper hove to for at least an hour picking up survivors but the loss of life was heavy, only 31 out of the Glowworm’s complement of 149 being saved.

Full information concerning this action has only recently been received and the VICTORIA CROSS is bestowed in recognition of the great valor of the Commanding Officer who, after fighting off a superior force of destroyers, sought out and reported a powerful enemy unit, and then fought his ship to the end against overwhelming odds, finally ramming the enemy with supreme coolness and skill.
–London Gazette, 6th July 1945

HMS Glowworm off the bow of Admiral Hipper. The Swastika is almost over the top in this image… 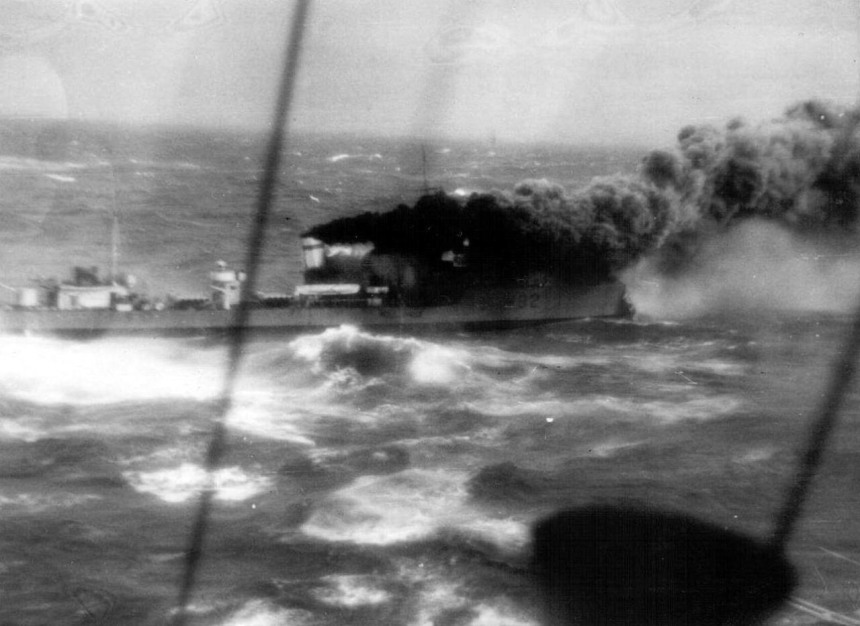 Closer to the destroyer, note seamen 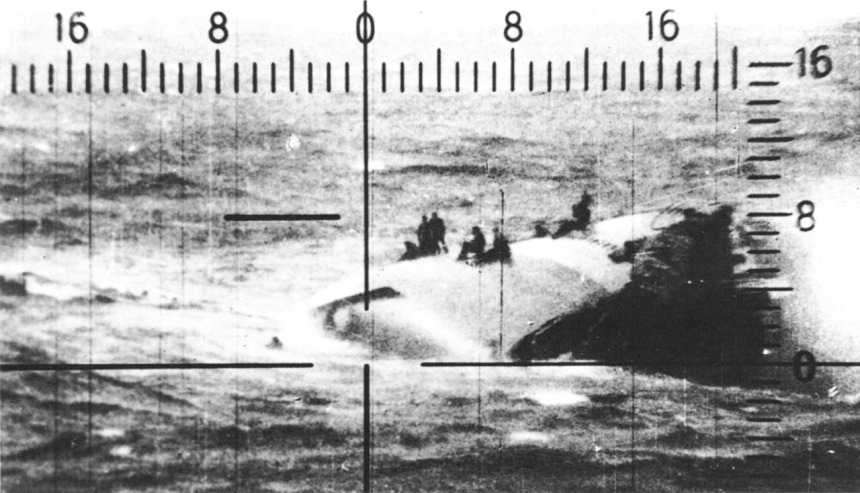 Hipper picked up 40 Royal Navy survivors and continued on to Trondheim, the strategic key to Norway, where she bluffed her way past local coastal defense batteries by saying she was a British ship and landed her troops.

Repaired, she broke out into the North Atlantic several times in 1940 and 41, stalking Allied convoys and sending several cargo ships to the bottom while staying just over the horizon from British battleships.

December 1940: Working alone, on Christmas Day about 700 miles to the west of Spain, Hipper encountered troop convoy WS5A, one of ‘Winston’s Specials.’ They were accompanied by carrier HMS Furious ferrying aircraft to Takoradi in West Africa. In the resulting long-range naval gunfire duel, she damaged the 13,000-ton County-class heavy cruiser HMS Berwick and two merchantmen but was forced to find easier prey.

February 1941: Again alone, Hipper sailed from occupied Brest in France seeking easy meat. Bumping into convoy SLS64, she found it. This convoy, bound for Britain from Sierra Leone, had the two worst things going for it: not only was it slow (14-knots) but it was also completely unescorted by Allied warships. Hipper had a field day, breaking the shillelagh out and– in what was termed the “slaughter of convoy SLS64“– in the course of just under two hours, she sank 7 merchantmen and severely damaged three others (more than half the convoy) with punishing naval gunfire.  In all this two-week sortie chalked up some 32,000 tons of Allied shipping to the boogieman.

In 1942, operating from Norway with the bulk of the remaining capital ships of Hitler’s navy, the very presence of the Hipper along with the other big guns of the Kriegsmarine, was often enough to scatter Allied convoys to the winds where U-boats and Luftwaffe bombers and could pick them up with leisure. 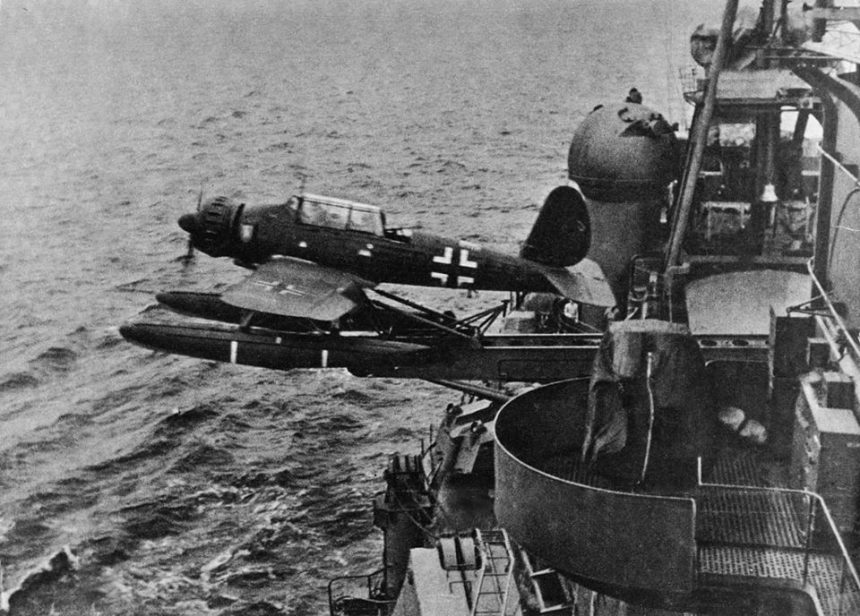 One such instance was the heavily escorted PQ-17, headed to Murmansk from Iceland in June 1942. Allied intel got wind of a sortie by Hipper and Tirpitz, (which was shit intel) and ordered the convoy to break apart in response. The resulting slaughter was epic as some 200 German aircraft and a dozen U-boats sank 24 out of 35 ships while the 43 escorting Allied warships largely were unmolested.

Later that year, Hipper and the pocket battleship Deutschland attacked the British ships escorting convoy JW 51B to Murmansk on New Year’s Eve. In that engagement, she reinforced her reputation as a destroyer killer by sinking the 1,300-ton A-class destroyer HMS Achates and the similarly sized Halcyon-class minesweeper HMS Bramble.

In this contest, while dealing Achates her death blow, the 11,000-ton Crown Colony-class light cruiser HMS Jamaica and the similarly sized Town-class light cruiser HMS Sheffield raced to the scene from over the horizon and just really plastered Hipper at close range. While these ships were smaller, together they carried more than two dozen rapid-fire 6-inch guns and closed in to use them to good effect, forcing the lumbering German to break contact and vamoose– which Hitler flew into a rage over later. 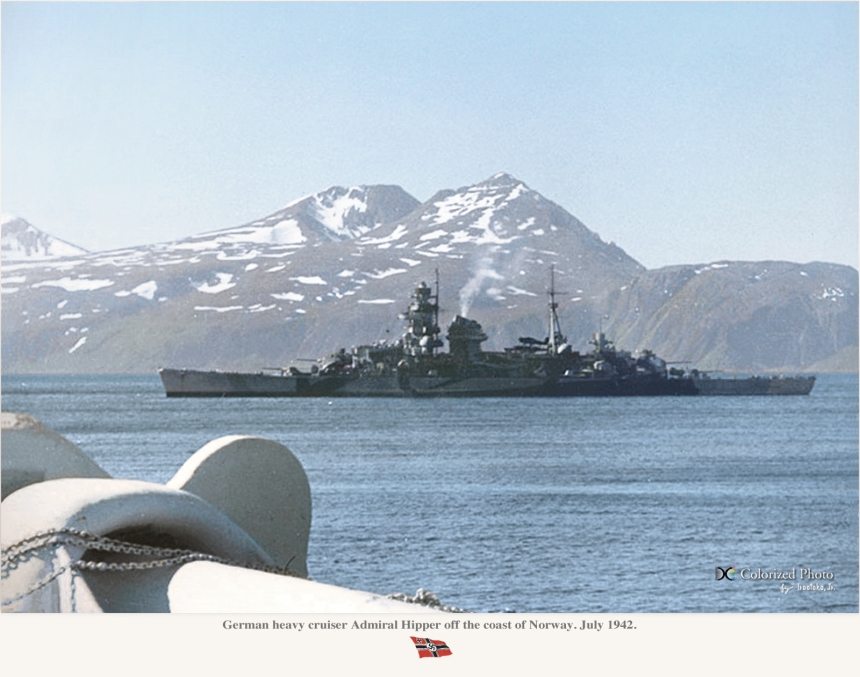 In fact, Hitler was so displeased with the overall cost vs return of the surface fleet that he in short order paid off the capital ships, sacked old High Seas Fleet sailor Adm. Erich Raeder in favor of U-boat vet Adm. Karl Dönitz, and ordered the damaged Hipper recalled to Germany where she was sidelined for the rest of the war.

Decommissioned in February 1943, she was a fleet in being of sorts as the Allies knew she had not been sunk and, indeed had even been used in early 1945 as an emergency sealift platform to evacuate trapped German troops in the Baltics. Although the Germans made a good attempt to hide her out, the Allies finally found the boogieman and she was crippled by RAF bombers on 3 May 1945– less than a week before the end of the war. 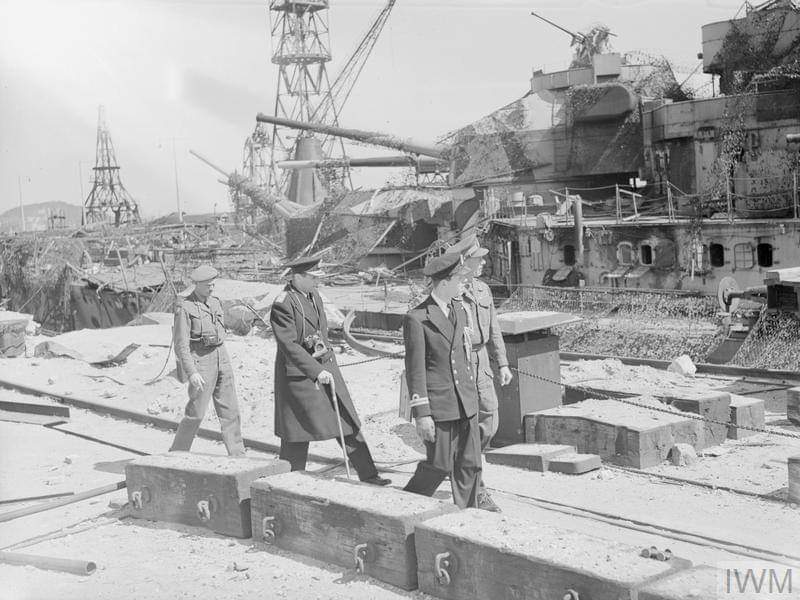 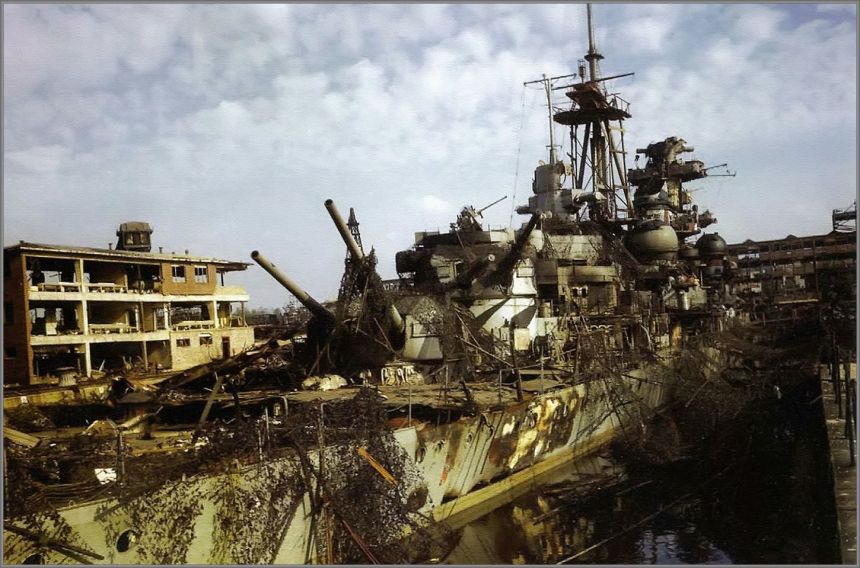 German heavy cruiser Admiral Hipper in dry dock at Kiel, May 19th, 1945. Click to big up 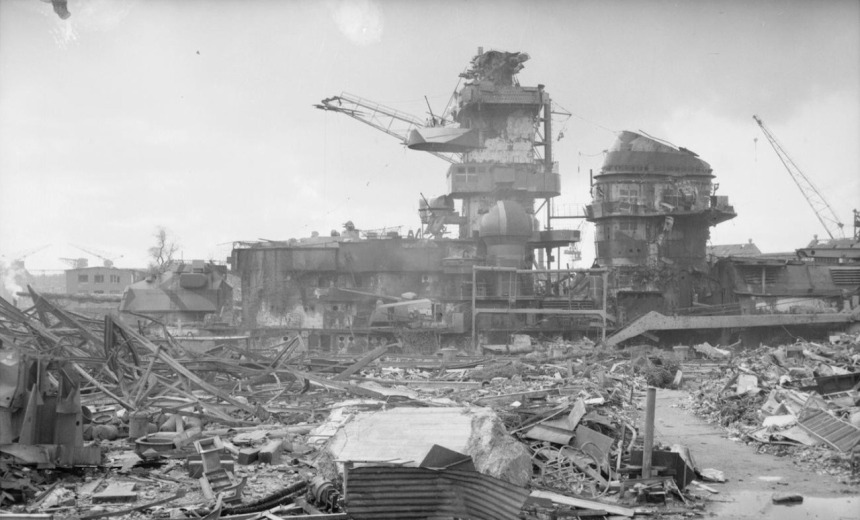 Remains of a heavy cruiser Admiral Hipper in the dock in Kiel, destroyed by the bombing of Lancasters. April 1945.

Her remaining crew scuttled the once-mighty warship and she was later raised and scrapped in 1952.

Of her sisters, as already noted Blucher was sunk in Norway; Seydlitz was never completed; Lutzow, in a twist of fate, was sold to the Soviets while Hitler and Stalin were still buddies as the Petropavlovsk in 1940 but never completed; and Prinz Eugen— the largest German naval ship to survive the war still afloat, was turned over to the U.S. Navy in 1945 then sunk the next year following nuclear tests at Bikini Atoll.

However, these last two sisters, Hipper and Prinz Eugen, are reunited in a unified Germany with the bell of the former and a screw of the latter preserved at the Laboe Naval Memorial near Kiel within walking distance of each other. 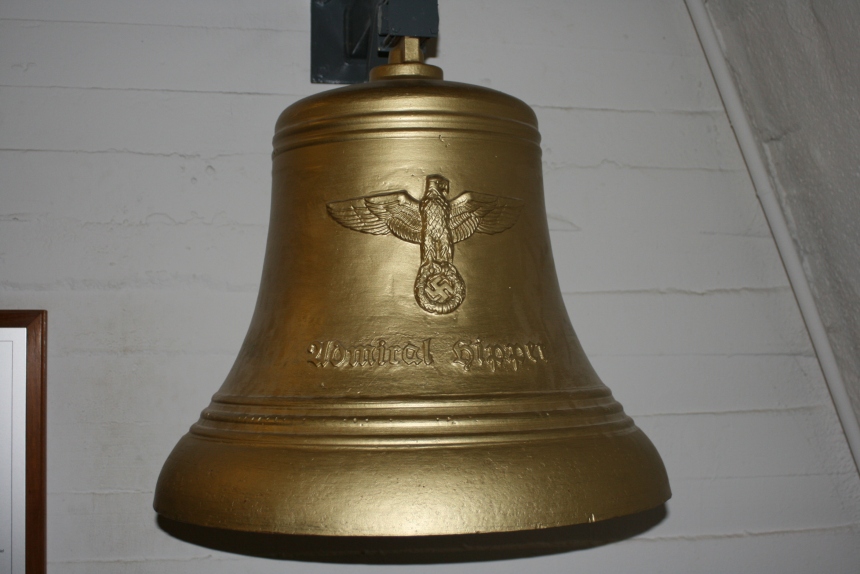 Besides this, Hipper has been the subject of much naval art: 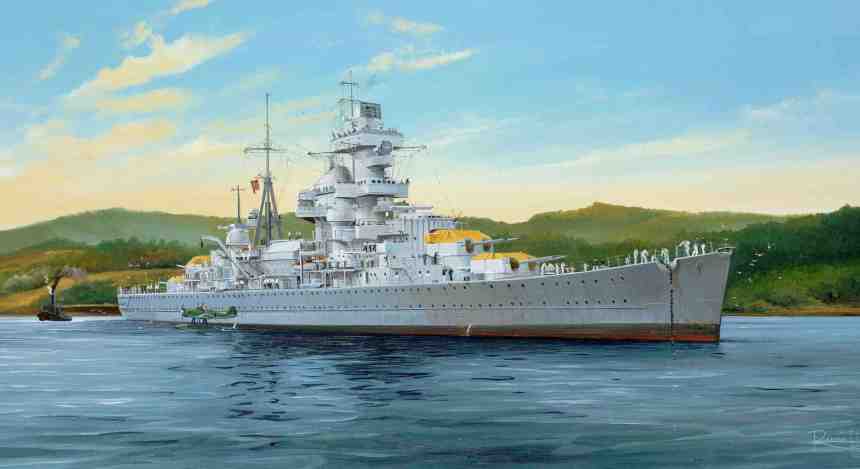 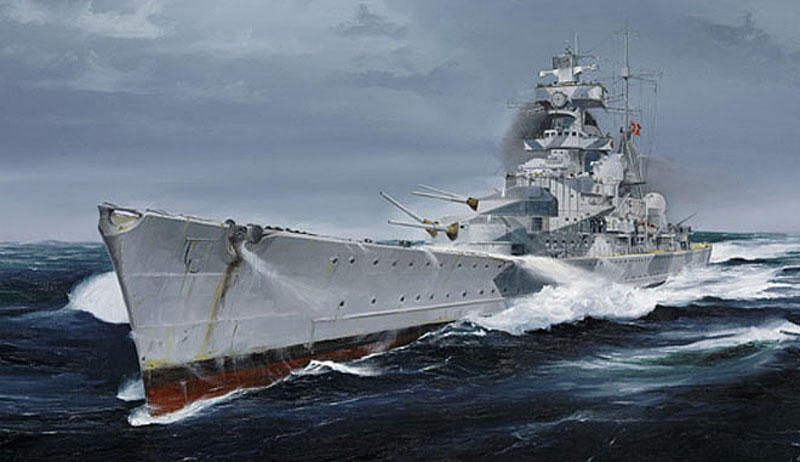 John Asmussen has a great source of information on Hipper should you want to learn more about this interesting ship.

As for the Glowworm, she is remembered as well.