Warship Wednesday, March 2, 2016: Fritz and the short career of an Italian battlewagon

Posted on March 2, 2016 by laststandonzombieisland 4 comments

Warship Wednesday: March 2, 2016 Fritz and the short career of an Italian battlewagon

Here we see the Littorio-class battleship (corazzata) Roma, the pride of the WWII Regia Marina and last flagship of Admiral Carlo Bergamini. While her 15 months of service to Mussolini’s Italy was uneventful, she ended her days with a bang.

Although the modern Italian Navy saw little service in the first few decades of the 20th Century– primarily being used in an uneventful blockade of the Austro-Hungarian fleet in World War I and a few skirmishes with the Turks before that– the admirals in Rome had a twinge of panic in the 1930s when the French laid down new, fast battleships for service in the Med.

These ships, which if you squint and look at them from a distance look a lot like the U.S. North Carolina-class battleships which followed just after, were beautiful, modern vessels.

With a full load displacement pushing 50,000-tons, they carried nine 381 mm/50 (15″) Model 1934 guns in three triple turrets guided by distinctive “Wedding Cake” Fire Control Directors and were  capable of firing a 1,951-pound AP shell to a maximum range of a staggering 46,807 yards– and keeping it up at 1.3 rounds per minute.

While the Littorios were reasonably fast, capable of 30 knots, they achieved this by using thin armor (just 11 inches in belt and much less on deck) which put them at risk against other large battleships (or significant aircraft-dropped ordnance) though below the waterline they used the innovative Pugliese torpedo defense system, a 40mm armored bulkhead blister outer hull over a 15-inch liquid-filled void. Although the Pugliese wasn’t ideal, the Soviets copied it for their last battleship class and the Littorios survived no less than four serious torpedo attacks during World War II (though air attack is another story).

But we are getting ahead of ourselves.

The hero of our sad tale, Roma, was the third and last of the class to be completed (Impero was canceled, her unfinished hulk ultimately sunk as a target). Laid down 18 September 1938 at Cantieri Riuniti dell’Adriatico in Trieste, when WWII came less than a year later, work slowed on Roma and she was only completed on 14 June 1942. 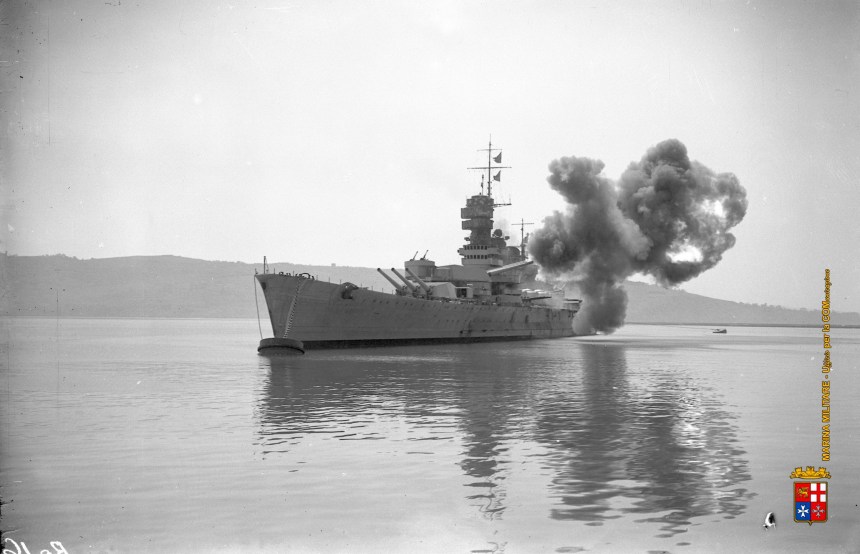 Roma was beautiful on the inside too it would seem – rather lavish officer’s quarters.

Commissioning. She would never be this beautiful again

Arriving at Taranto on 21 August, she was assigned to the Ninth Naval Division, though with the general lack of fuel experienced in all of the Axis countries by that stage of the war, she rarely went to sea.

In November, with the Americans landing in North Africa in Operation Torch, all three Littoros were moved from Taranto to Naples to lay low. The Americans quickly found them, however, and after air attacks Roma and her two sisters were moved to La Spezia where, for the next several months, they endured near-weekly air attacks that left all of the ships bruised and battered though unbroken.

Soon after commissioning she was given a distinctive camo pattern

In all, over a 15-month period, Roma spent a grand total of just 130 hours underway under her own steam.

Her deck fore and aft had red and white diagonal stripes

As Rommel was defeated in North Africa and the Allies began landing on Sicily in July 1943 during Operation Husky, the Italian fleet at La Spezia consisting of the three Littoro sisters, a few cruisers and eight destroyers was put under the command of Admiral Carlo Bergamini, who chose Roma as his flag. An old-school surface warfare officer, Bergamini had picked up a silver medal in 1918 during the Great War while the gunnery officer of the cruiser Pisa, and commanded the Italian battleship division from the deck of Vittorio Veneto during the Battle of Cape Spartivent– which was about the closest thing to an Italian victory over the Royal Navy during WWII.

Then in September, the Allies began Operation Avalanche, the invasion of Italy proper. This led Bergamini, under orders from the new Italian government who sought an armistice with the Allies, to take his fleet across to La Maddalena in Sardinia where King Victor Emmanuel III was setting up new digs, thus keeping the flower out of navy out of German hands.

The only thing was, the Germans weren’t a fan of that plan, as the Allies jumped the gun and announced the secret Italian armistice on the radio in Algeria on 8 Sept.

Slipping out in the predawn hours of 9 Sept, Bergamini’s fleet, joined by three cruisers from Genoa, made for Sardinia and just after dawn saw Allied planes observing their movements– but not attacking. Then, around 1340 that day came the news the Germans had seized La Maddalena, leaving Bergamini in a pickle as he cruised through the narrow Strait of Bonifacio between Corsica and Sardinia.

Over the next two hours, six German Do 217K-2 medium bombers from III. Gruppe of KG 100 (III/KG 100) were seen by lookouts, each carrying what appeared to be a single large bomb. At 1530, these bombers climbed and hurled one of these oddball new bombs– that seemed to maneuver in flight– at the battleship Italia (Littorio), exploding just off her stern, damaging her rudder.

Then at 1545 a second bomber dropped a 3,450-pound, armor piercing, radio-controlled, glide bomb, which the Luftwaffe called Fritz-X, right down Roma‘s gullet. 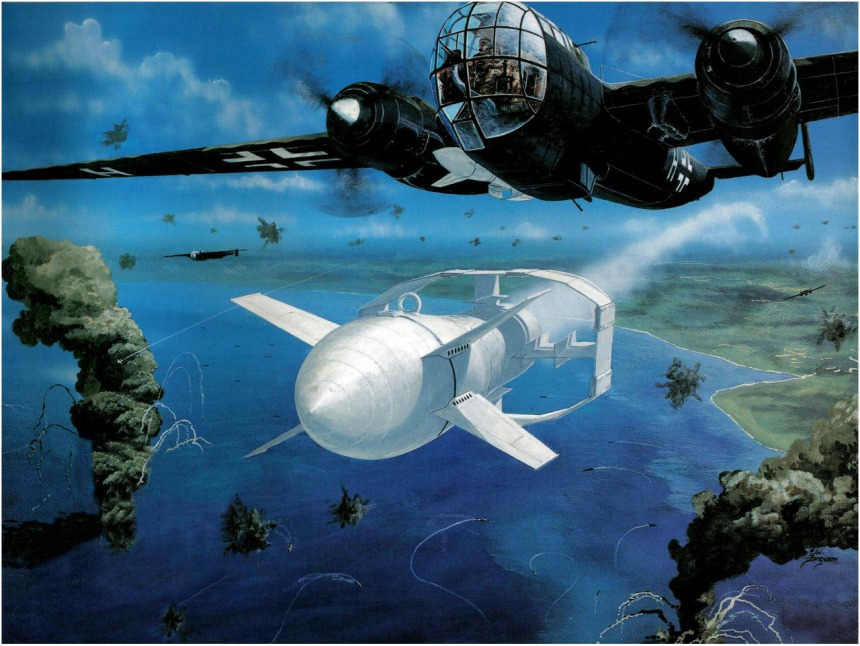 Depiction of the Dornier Do-217 Fritz X attack on Italian battleship Roma. The glide bomb had a flare in its tail to allow the bombardier to guide it to its target from up-to 5km away

“End of the Roma 1943” by Paul Wright. Note the very distinctive markings on deck. However, the flare on the Fritz-X seems a little too rocket-like as the bomb was unpowered. 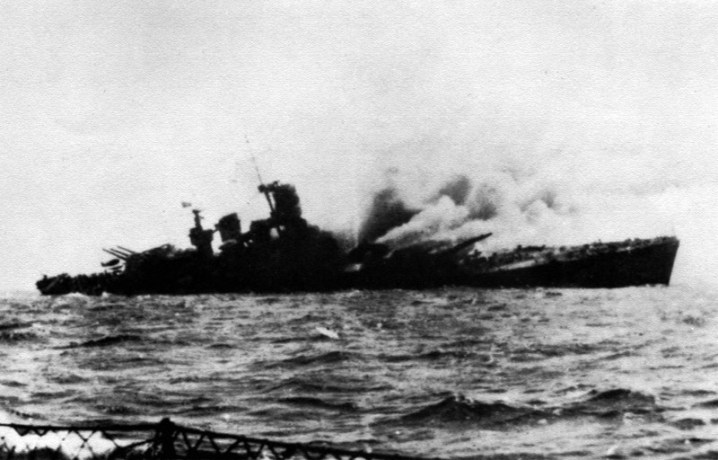 Eight minutes later, another Fritz struck the already crippled ship, leading to a magazine explosion that killed the vast majority of her crew– including Bergamini. 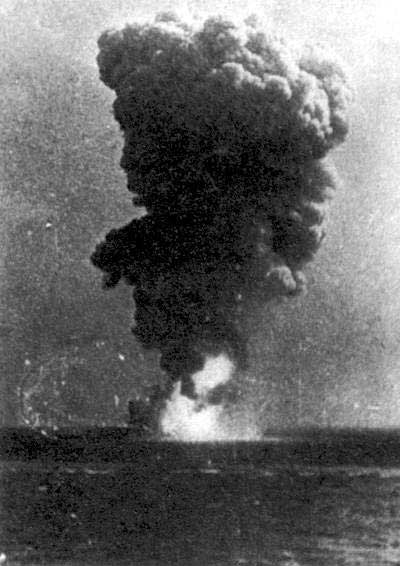 Explosion aboard Roma, Strait of Bonifacio

Capsized, she broke in two and sank by 1615. In all, two Admirals, 86 Officers and 1264 sailors were taken down to the seafloor with the stricken flagship who had less than 3,000 miles on her hull.

The rest of the fleet carried on and eventually made Malta where they were interred under British guns for the duration of the war, later moving to Alexandria where they remained until 1947. While Roma’s sisters, Italia/Littorio and Vittorio Veneto were on paper given to the U.S. and Britain respectively as war prizes, this was largely to keep them out of Soviet hands and both were scrapped at La Spezia in the early 1950s.

On Fritz, KG 100 continued to use these amazingly destructive weapons– the first effective smart bombs and precursors to current anti-ship missiles– in attacks on the cruisers USS Savannah, USS Philadelphia, HMS Uganda and the British battleship HMS Warspite, though without sinking them. Within months, the Allies figured out Fritz could be foiled by attacking his radio waves and by the Normandy invasion had issued some of the first electronic countermeasures to the fleet to jam the German wunderweapon.

German aerial picture of the KG100 attack on Warsprite

An Italian Navy picture of a AAA gun on the Roma, found at a depth of 1,000 meters around 25 km off Sardinia’s coast.

Bergamini in death was promoted to the rank of Ammiraglio d’Armata and two frigates, one in 1960 and another in 2013, have been named in his honor, the latest of which had top of the line air defenses against anti-shipping missiles. 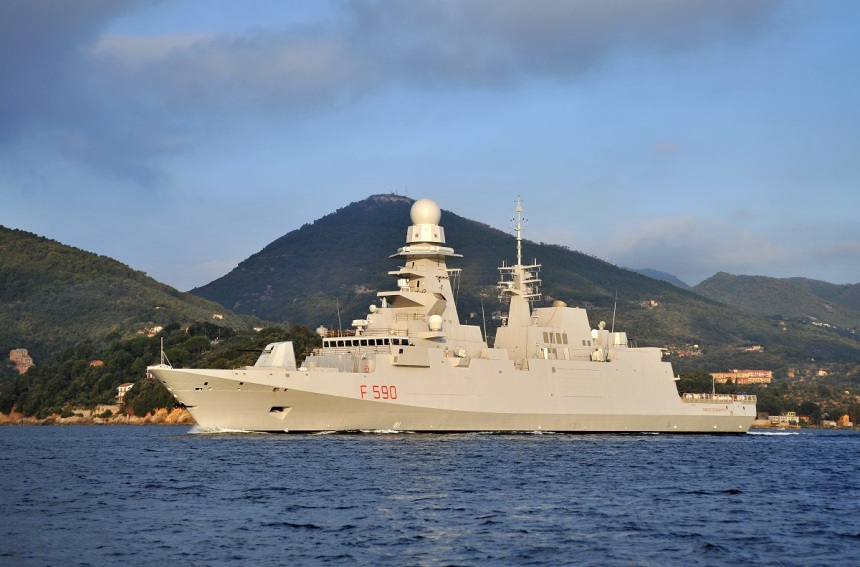