Charles N. Daly was not a man to be trifled with 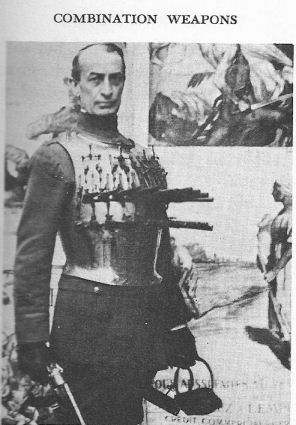 The book ( pg. 12) states that the armor was “found in Bordeaux in 1917” and found its way into the collection of aforementioned Mr. Daly. The cuirass weighs 30 pounds and holds nineteen cartridge pistols. Here is a further description from Firearms Curiosa:

“cuirass of steel . . . when brought into a right angle position may be fired in batteries of four and five by pressing the studs and levers, which release the hammers which are cocked by a hook carried on a chain.” The armor also came with a pair of stirrups that contained two pistols, which would fire by pulling on a strap in case one is pursued or attacked from behind. (ibid)

[ Hattip, Eldon Litchfield on the above ]

A 1922 article by Sumner Healy in Outers details the armor to more extent and includes photos of it with a set of pistol-loaded stirrups and two pistol loaded sabretechs which all told gave the horseman a total of 39 shots before having to reload.

As for Noe, he married one Mary Ecclesine in a New York society event, and died at age 65 on Thursday, October 5, 1933 in York, Ontario, where he had long been U.S. Consul.

His 1,000 item personal collection that included the strange armor above, a saddle gun used by William of Orange, Adm. Nelson’s pistol, and others, were sold in 1935 at public auction in Ottawa.

Some of the lots:

Who knows where it is at now.