Nice fjord you have there

The Spanish Navy’s Almirante Juan de Borbón (F102) is the second ship of the new F-100 class of air defense frigates and is well-equipped with a SPY-1D phased array “mini-Aegis” radar suite, 48 VLS launch cells and a 5-inch gun in a compact 5,800-ton package (how come we couldn’t have ordered 48 of these for the LCS design!?).

The Portugese Navy’s 3,200-ton NRP Alvares Cabral (F331) is a Vasco da Gama-class fast frigate of the popular German MEKO 200 type and is more modestly equipped for ASW and ASuW action with a suite of guns, torpedoes and Harpoons.

As for the German Navy’s FGS Ludwigshafen am Rhein (F 264) she is a handy K130 Braunschweig-class ocean going corvette of some 1,800-tons. Armed with a 76mm gun and RBS-15 antiship missiles, she is a modern day fast attack craft and would surely prove her worth in combat among a craggy coastal littoral such as the Norwegian coast.

As noted by NATO: SNMG1 is one of four multinational, high readiness groups composed of vessels from various allied countries. These vessels are permanently available to NATO to perform different tasks ranging from participation in exercises to operational missions. These groups provide NATO with a continuous maritime capability and help to establish Alliance presence, demonstrate solidarity, conduct routine diplomatic visits and enhance interoperability among Allied naval forces. They also serve as a consistently ready maritime force of the NATO Very High Readiness Joint Task Force (VJTF).

Of course, it reminds me of this painting of a very different time, but the same coast. 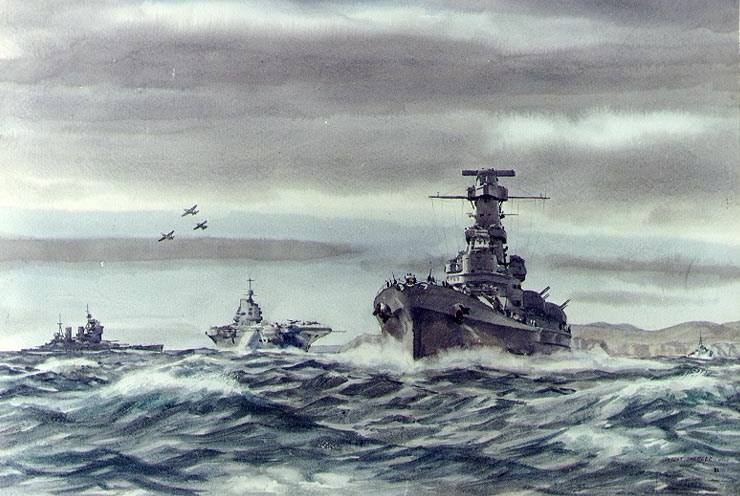 “Task Force of Two Navies” Watercolor by Dwight Shepler, USNR, 1943, depicting U.S. and British warships in the Pentlant Firth during an operation toward the Norwegian coast, coincident with the Sicily invasion, July 1943. USS Alabama (BB 60) is in the lead, followed by HMS Illustrious and HMS King George V. Three British carrier-based fighters (two “Seafires” and a “Martlet”) are overhead.