Today the Canadian Army rocks some gently used (mainly former Dutch Army) Leopard 2A4+/2A4M/2A6M main battle tanks but their armored tradition goes way back. In the 1930s, the branch trained with early US M1917 tanks and Vickers MKVI light tanks than by 1941 was using MkIV Churchills.

In World War II, Canada actually rolled their own tanks, producing 1420 locally-built Valentines at the Canadian Pacific Railway’s Angus Shop in Montreal. While most of the V’s went to the Soviet Union for use on the Eastern Front, the Montreal Locomotive Works built a modified version of the M3 Lee medium tank as the Ram to equip Canuck units in Northern Africa early in the war.

In 1943, MLW switched from the Lee/Ram to the Sherman (called “Grizzly” in Canadian service), which included British radio gear, a 2-inch smoke mortar mounted on the turret, and a cast hull as opposed to the more common welded-hull version.

The 1st Canadian Armoured Brigade was equipped with Grizzlies in time for the invasion of Sicily in July 1943.

In all, MLW made 188 Canuck Grizzlies while others were acquired from allies.

The novice Canadian Armored Corps in Italy caught hell from both the terrain and German PzKpfw IV’s when 36 Shermans from the Three Rivers Regiment (Tank), CASF (now the 12e Régiment blindé du Canada) took on the brunt of the veteran German 16th Panzer Corps near Termoli in one of the most epic armored engagements of Canadian military history. 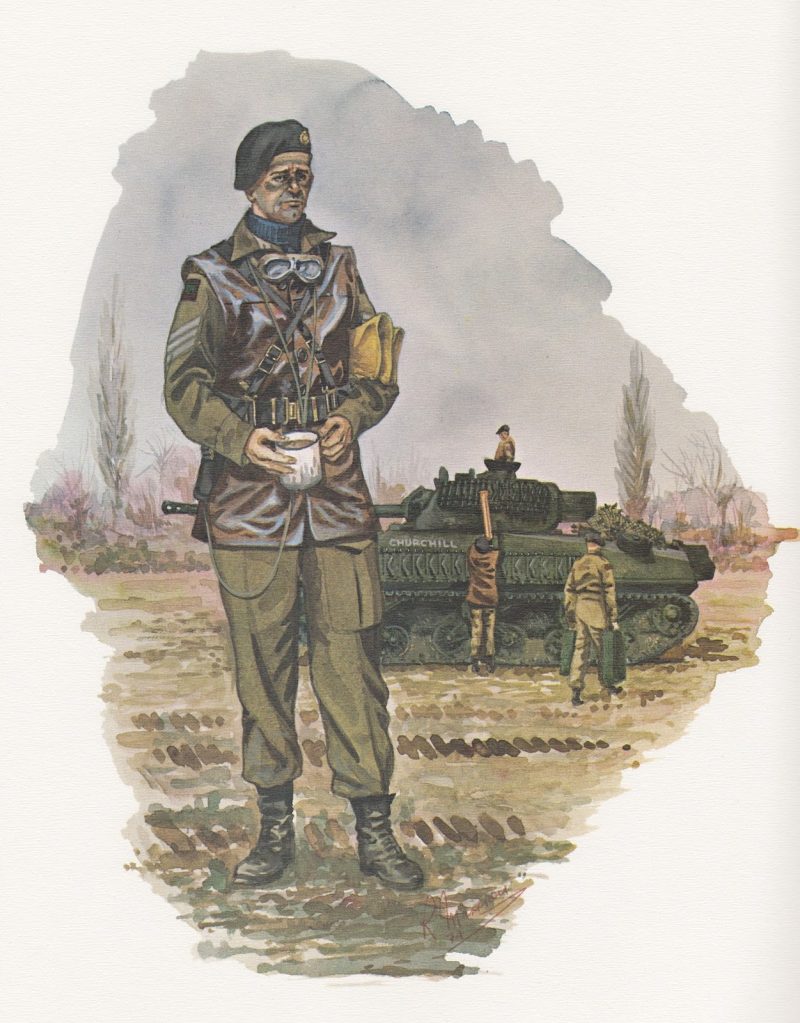 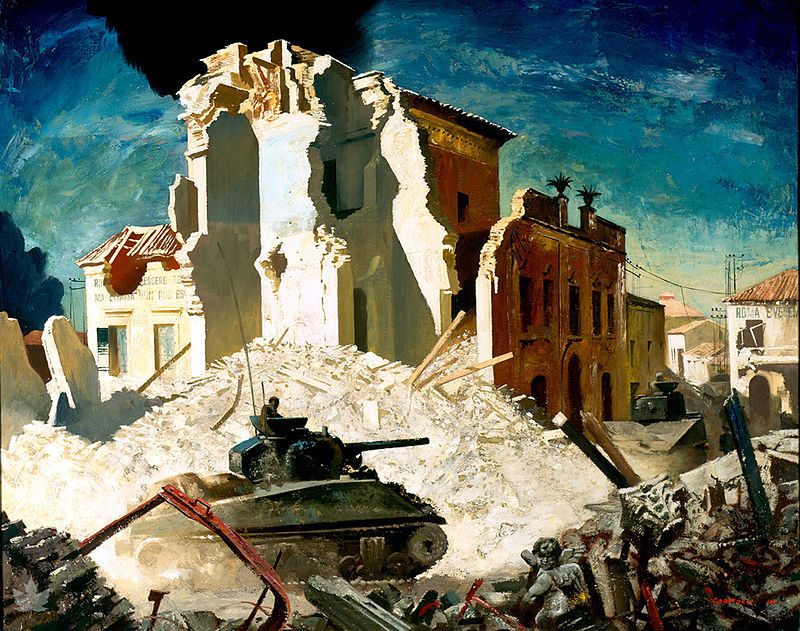 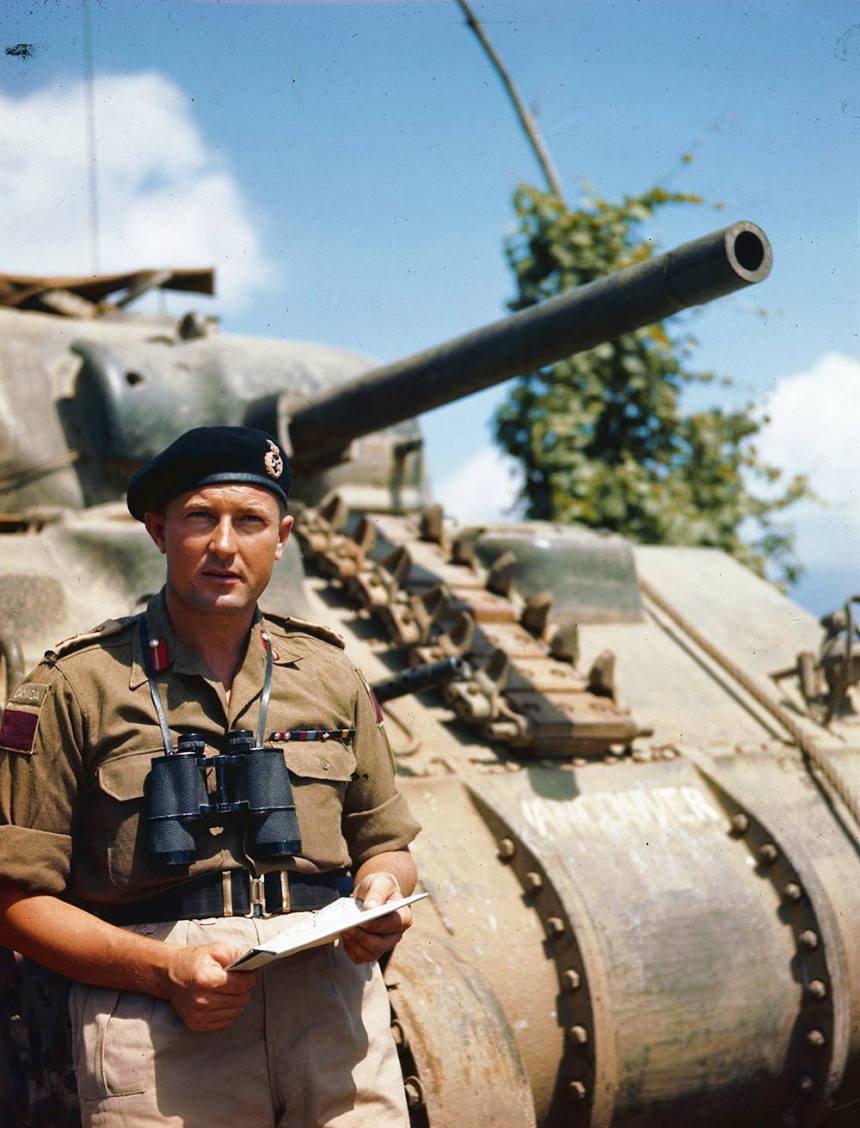 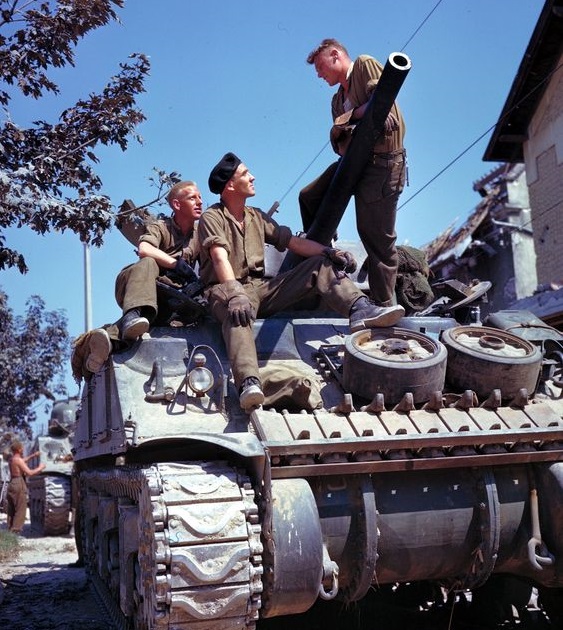 A rare color chrome of a Sherman V of the Canadian 29th Reconnaissance Regiment (The South Alberta Regiment). The Tank was commanded by Major David Currie (VC), and the tank was named ‘Clanky’. This photo was taken in Normandy around Arromanches in July of 1944. Photo via TheShermanTank.com 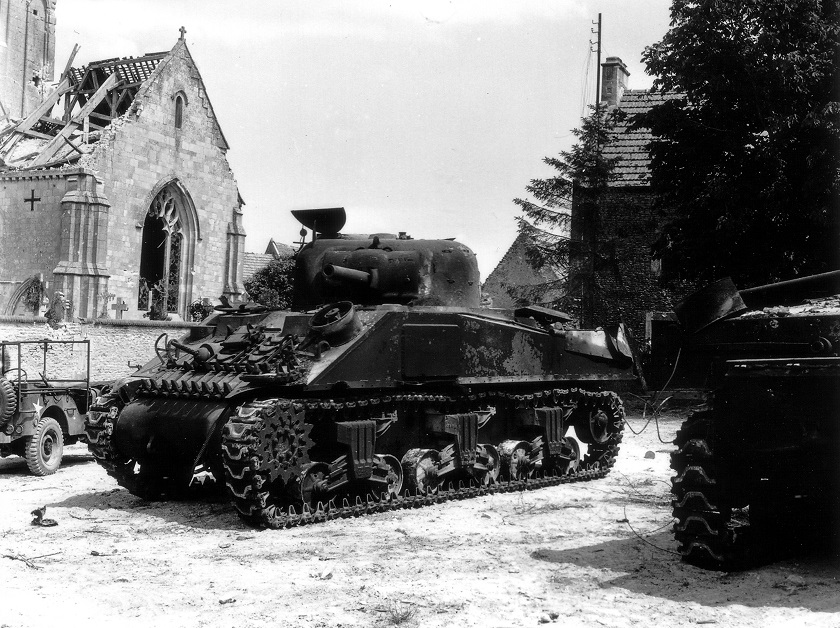 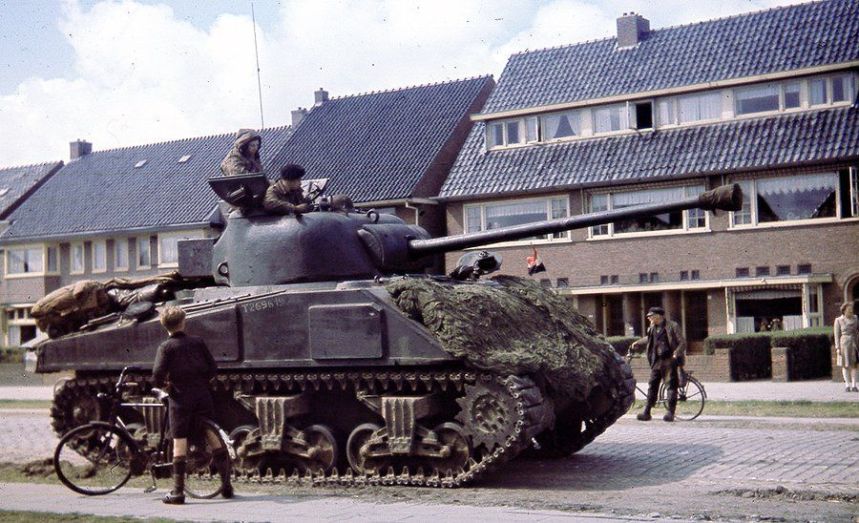 Color photo of a Canadian Sherman Firefly tank in Leeuwarden, the Netherlands, 1945, assigned to the Royal Canadian Dragoons (RCD)

Some Grizzlies were converted into the Skink anti-aircraft tank with a turret mounting four 20 mm Polsten guns– a very effective anti-personnel and AAA platform. 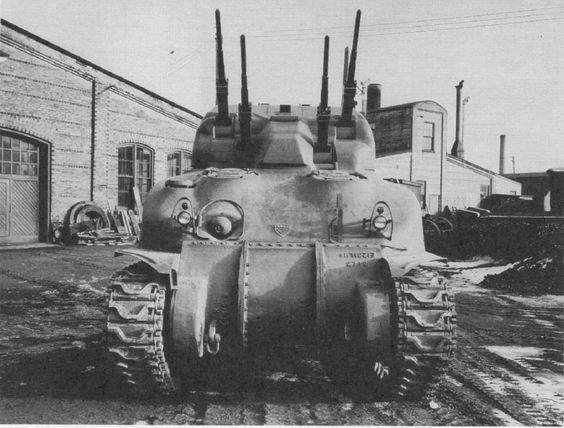 “Tank AA, 20 mm Quad,” better known as the Skink was a Canadian self-propelled anti-aircraft gun, developed in 1943-44 fully enclosed mounting on the chassis of the Grizzly Canadian-built M4A1 Sherman

Other variants included the Badger flame tank and Kangaroo APC, both made from Sherman hulls.

When Hitler was vanquished, the Canadians left their Grizzlies/Shermans in Europe while in 1946 they picked up 294 “Easy Eight” M4A2(76)W HVSS Shermans cheap– just $1,460 each (Late model Shermans cost $200,000 to make in 1945). They were leftovers from Lend Lease production meant for Uncle Joe in Moscow but by that stage of the 1940s, the U.S. would rather sell them at scrap prices than give them to the Soviets.

The batch of M4A2(76)W’s (M4A3E8’s) were kept in Canada proper for training purposes, even though they were different from the Shermans forward deployed along the Rhine.

When Korea came, the Canadians borrowed 20 Shermans from the U.S. Army and Marines in-country and, after using them in often very heavy combat and tense DMZ patrol from 1951 to November 1954, returned all 20 back to the U.S. 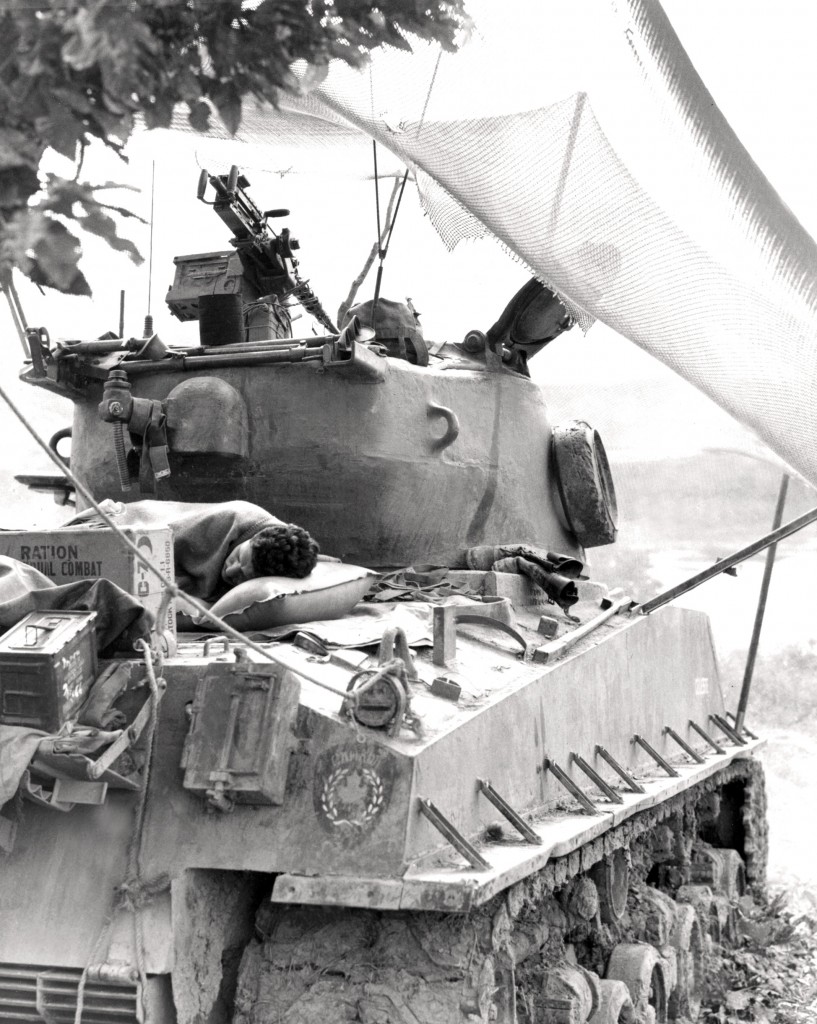 Trooper Andy Parenteau of the Lord Strathcona’s Horse (Royal Canadians) sleeps on the back of a Canadian Sherman M4A3(76)W HVSS tank, Korea. Note the American ration box and United Nations/Canada crest on the tail 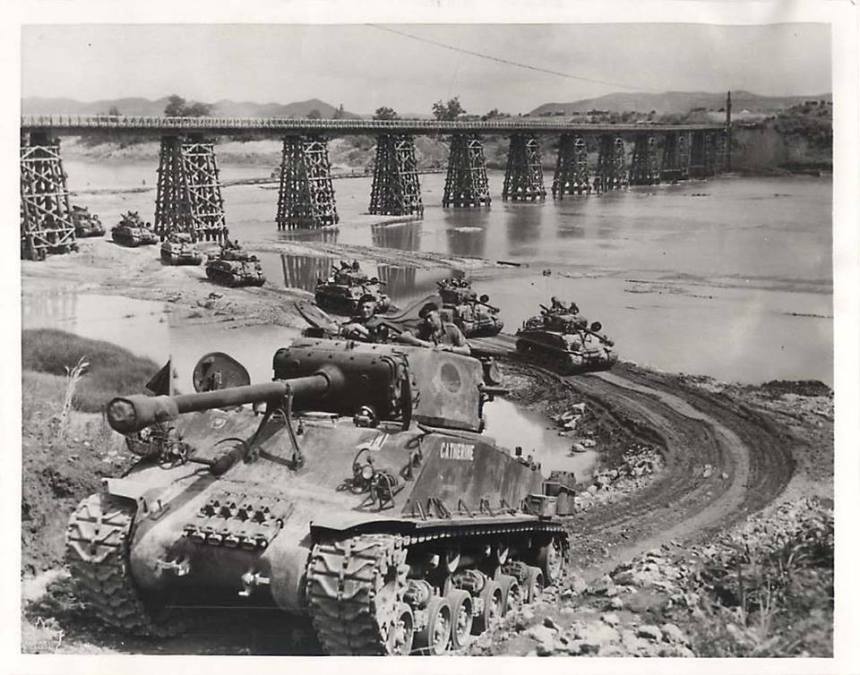 British forces used Centurions in the conflict– speaking of which…

In 1952, the Canadian Army bought the first of what would be 274 Centurion Mk 3 Tanks and split these MBTs between the active units in Germany (with their Grizzles being passed on to Portugal) and at home, later adding 120 Mk 5’s to the arsenal– while transferring the Easy Eight Shermans to reserve units.

They remained in service until 1978 when Canada replaced their aging Centurions with 127 new German-built Leopard C1 (equivalent to Leopard 1A3 with laser rangefinder) MBTs and, as the buy was limited and 114 were based in West Germany, just a handful were sent home to Canadian Forces Base Gagetown, New Brunswick for training.

The days of large tank lots in Canada had come to an end.

This led to the retirement of the last Canadian reserve force Shermans in the 1970s, one of the last Western countries to do so. 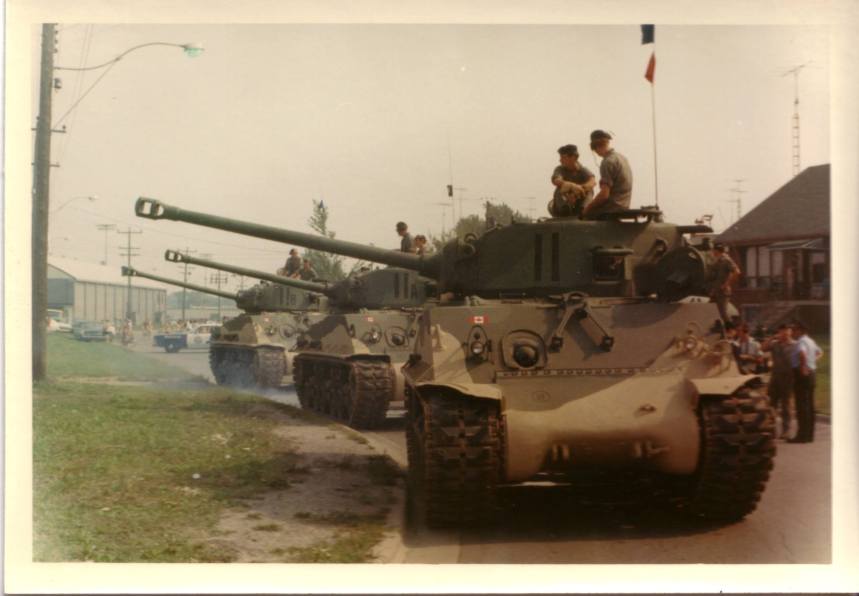 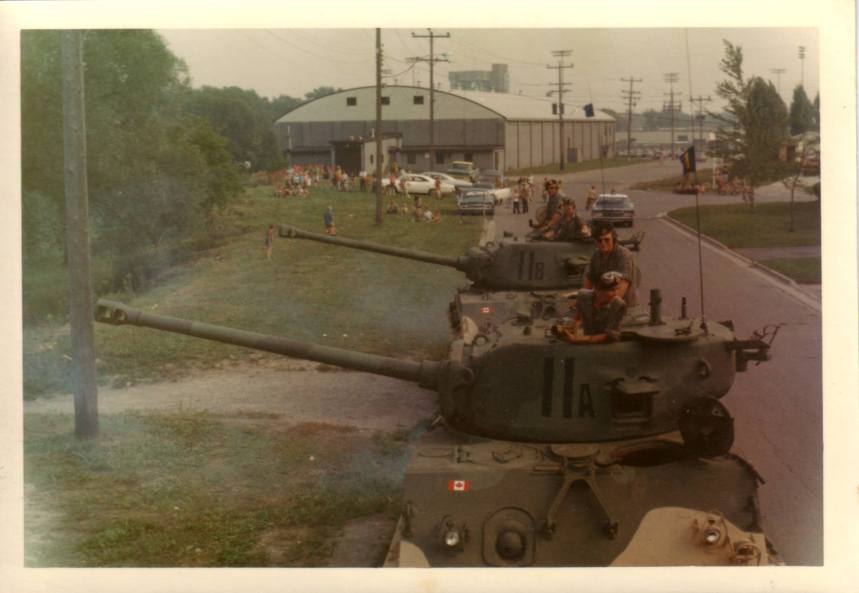 You have to admit, the camo scheme looks good on these tanks…and they were an instant WWII veterans parade every time they left the armory

After retirement, many Canadian Shermans remained in use well into the 1980s– as targets and gate guards. 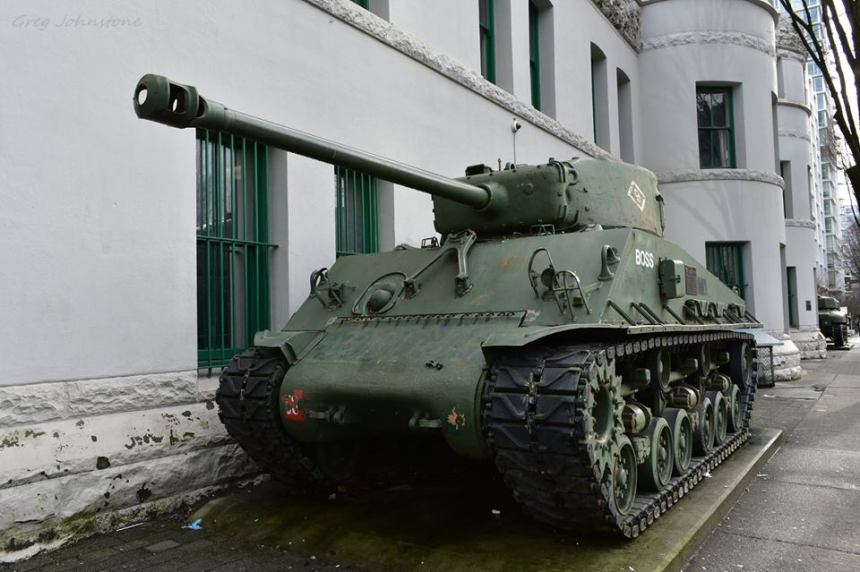 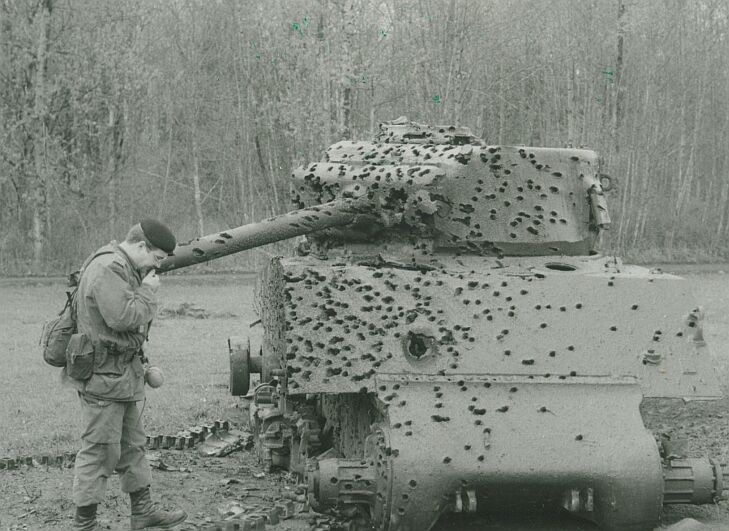 It should be noted that as late as 1989, the Finning Tank Drill, a rock drill used in logging road construction, was produced in British Columbia from Sherman hulls while BC’s Morpac Industries, Inc., still produces heavy-duty, off-road load crawlers based on Sherman components. It is very likely these civilian mods will be in the wilds of Canada’s western forests for decades to come.

Here is a Finning caught in its natural state:

Today some 60~ intact models are thought to still exist in the country as gate guards and museum pieces and they pop up from time to time in both their Grizzly and later Easy Eight variants for sale at reasonable prices.

Overall, not a bad track record for the often derided Sherman.