Posted on November 23, 2016 by laststandonzombieisland 5 comments

Here we see the Admirable-class minesweeper USS Salute (AM-294) photographed sometime in 1944. Although she gave her last measure too soon after, her memory and relics endure.

The U.S. Navy has a long history of minesweeping, having lost the first modem ships to those infernal torpedoes in the Civil War. As a byproduct of Mr. Roosevelt’s Great North Sea Mine Barrage of the Great War, the Navy commissioned their first class of minesweepers, the Lapwing or “Old Bird” type vessels which lingered into WWII, followed by 1930s-era 147-foot three-ship Hawk-class and the much larger 220-foot Raven and Auk-classes early in the first days of that second great international hate.

In early 1941, the Navy set its sights on a hybrid class of new steel-hulled oceangoing sweepers built with lessons learned from their previous designs, that of a 180-foot, 750-ton vessel that could both clear mines and, by nature of their forward and aft 3″/50 guns, provide a modicum of escort support. Since they could float in 9’9″ of water, they were deemed coastal minesweepers at first.

First of the class of what would eventually turn into orders for 147 ships (of which 123 were completed) was USS Admirable laid down as AMc-113, 8 April 1942 in Tampa, Florida.

Another 68 craft, sans mine gear, were completed as PCE-842-class patrol craft.

The hero of our tale– the first to carry her name– USS Salute (AM-294) was laid down 11 November 1942 at Winslow Marine Railway and Shipbuilding Co, Seattle, WA. Commissioned 4 December 1943 with LT Raymond Henry Nelson, Jr., USNR, in command, the addition of ASW gear and an AAA suite (though one of the original design’s 3-inchers were deleted) raised her displacement to 945 tons fully loaded but gave her some defense against Japanese subs and planes.

On board Salute on her builder’s trials, note the Winslow Marine flag from her wheelhouse

Salute on trials from Winslow

According to DANFS, she spent most of 1944 working out of Hawaii escorting convoys between Pearl Harbor, Majuro, Kwajalein, Eniwetok, Guam, and Saipan. It was in this work that she picked up her distinctive camo scheme in March 1944.

With LT Jesse Robert Hodges, USNR, assuming command in June, Salute reported to the 7th Fleet at Manus on 8 October 1944 for the Leyte invasion.

Working with her sisters in Mine Division 34 off the Leyte beaches, she helped clear the landing areas and provide cover fire from Japanese air attacks then combed the waters for survivors of the great Battle off Samar.

Between November 1944 and April 1945, a period of just over six months, Salute conducted dangerous pre-invasion sweeps at Ormoc Bay, Mindoro Island, Subic, the Lingayen Gulf, Zambales, Mariveles and off Corregidor in Manila Bay, the Sulu Sea off Palawan, and off the beaches of Legaspi– often while under fire from shore batteries and dodging kamikazes.

It’s not hard to see how she earned five battle stars for her World War II service. She reportedly cleared 143 Japanese naval mines during the Philippines Campaign.

On 9 May, Salute arrived at Morotai to prepare for operations in the Netherlands East Indies (today’s Indonesia).

It was in that chain that, while sweeping off Brunei Bay, Borneo, on 7 June 1945, she struck a mine, which broke the tiny ship’s back. Landing craft came alongside in an attempt to prop up the rapidly swamping ship, but her hull had taken fatal damage and within minutes, her crew was ordered off the ship. Once clear, the lines holding Salute to the landing craft were cut and she was cast loose into the bay where she quickly swamped, broke in two, and sank, her bow coming to rest over her stern.

From a report by Lt. James J. Hughes, an officer aboard Salute who survived the explosion:

“The ship was hit mid-ship, right underneath the belly, and it came right up through all the decks,” said Hughes. “Anybody in that area was killed, especially in the engine room; they didn’t have a chance. We hit it about 4:00 in the afternoon and sunk about midnight. We were making the last run of the day.”

Salute suffered nine crewmembers killed or missing and two officers and eight enlisted wounded with the War Department reporting her loss on June 26. She was struck from the Naval Register 11 July 1945.

Located in 90 feet of water at 5° 08’N, 115° 05’E, over the years she became a popular dive site after the Malaysian navy removed her unexploded depth charges, which brings us to recent developments.

Navy divers from Mobile Diving and Salvage Unit (MDSU) 1 along with Royal Brunei navy personnel dove on Salute from USNS Salvor (T-ARS-52), located in 90 feet of water, over a three-day period earlier this month.

The diving operations were the first by the U.S. Navy on the wreckage of Salute and were conducted as part of Cooperation Afloat Readiness and Training (CARAT) 2016.

“These operations provided U.S. Navy divers a unique opportunity to work alongside our Bruneian counterparts on a very meaningful project,” said Lt. Chris Price, detachment officer-in-charge, MDSU 1. “We are preserving our Navy’s rich history and heritage, and giving a very fitting remembrance to these fallen Sailors.”

USS SALUTE (November 16, 2016) U.S. Navy Divers attached to Mobile Diving & Salvage Company ONE divers serving with the Royal Brunei Armed Forces gather for a group photo at the wreckage site of USS Salute (AM-294), which sank in Brunei waters on June 7, 1945, during Cooperation Afloat Readiness and Training (CARAT) Brunei 2016, Nov. 15. CARAT is a series of annual maritime exercises between the U.S. Navy, U.S. Marine Corps and the armed forces of nine partner nations to include Bangladesh, Brunei, Cambodia, Indonesia, Malaysia, the Philippines, Singapore, Thailand, and Timor-Leste. (U.S. Navy photo by Lt. Chris Price/RELEASED)

Four artifacts– a gas mask, a glass inkwell, and two pieces of china: a larger plate and a smaller plate– were recovered and are being assessed for preservation.

However, the four pieces are not all in the greatest of condition—the mask especially—and because of the aquatic environment they spent the last 71 years in, they will all require specialized conservation treatment. Conservation is a main component of any underwater archaeology program since artifacts recovered from submerged archaeological sites require special preservation care.

Besides the recent attention, Salute is remembered by a veteran’s website that hosts crew reunion information. In 1995 the group placed a wreath on her wreck during the 50th anniversary of the liberation of Labuan.

Her name was recycled for an Aggressive-class ocean minesweeper USS Salute (MSO-470) commissioned on 4 May 1955. She famously helped look for a lost H-bomb off Spain in 1966 and continued to serve until 1971 when she was broken up prematurely.

The latter Salute‘s engineering plans are preserved in the National Archives and she was the last to carry the name on the Navy List.

Speaking of plans, the Admirable-class sweepers have been a very popular model over the years:

As for Salute‘s Admirable-class sisters, 24 were given to the Soviets in 1945 and never returned, others remained in use by the Navy through the Korean War era, and some were later passed on to the Taiwan, South Korea, the Republic of Vietnam, and the Dominican, Mexican, Myanmar, and Philippine navies.

At least five PCE-842/Admirable-class ships remain in nominal service as patrol craft with the Philippines including BRP Magat Salamat (PS-20), formerly USS Gayety (AM-239), shown below. 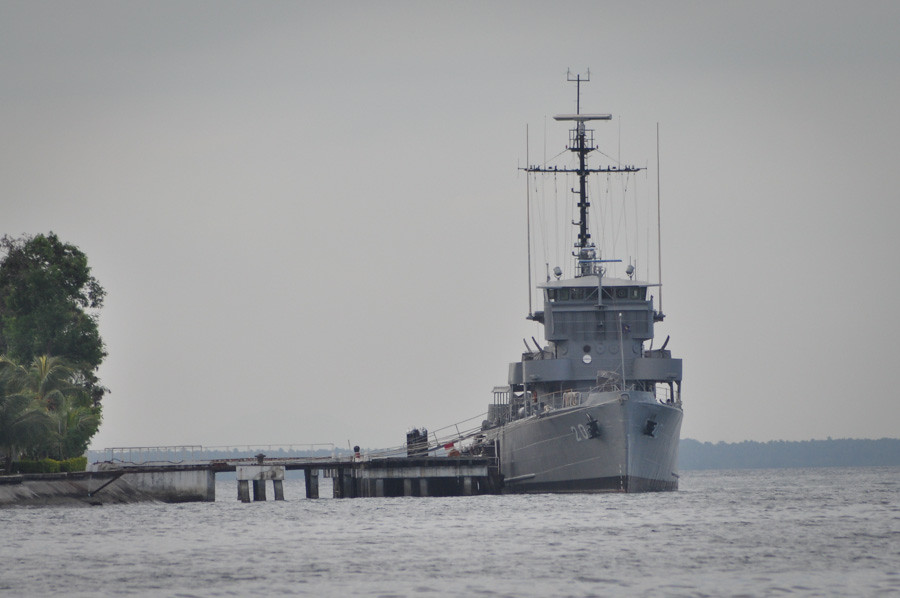 Now a National Historic Landmark, she was retired in 1971 and, put up for sale on the cheap:

Hazard was installed on dry land at Freedom Park on the Missouri River waterfront in East Omaha where she is open to the public.

According to the NPS:

The ship was transferred to Omaha with all of her spare parts and equipment intact. The only equipment missing from USS Hazard is the minesweeping cable. All equipment (radio, engines, ovens, electrical systems, plumbing) is fully operational. USS Hazard still retains its original dishes, kitchen utensils, and stationery. USS Hazard is one of the best preserved and intact warships remaining from World War II. USS Hazard is a virtual time capsule dating from 1945.