Warship Wednesday Nov. 30, 2016: The Almirante and her Yankee (and Chilean) sisters

Posted on November 30, 2016 by laststandonzombieisland 4 comments

Here at LSOZI, we are going to take off every Wednesday for a look at the old steam/diesel navies of the 1859-1946 period and will profile a different ship each week. These ships have a life, a tale all of their own, which sometimes takes them to the strangest places. – Christopher Eger

Warship Wednesday, Nov. 30, 2016: The Almirante and her Yankee (and Chilean) sisters

Colorized from Detroit Publishing Co. no. 022451 in LOC

Here we see the fine Armstrong-built protected cruiser (cruzador) Almirante Barroso of the Brazilian Navy (Marinha do Brasil) during the 1907 International Naval Review in the Hudson River, a gleaming white ship already obsolete though just a decade old.

As part of a general Latin American naval build-up, Brazil ordered four cruisers in 1894 from Armstrong, Whitworth & Co in Elswick from a design by naval architect Philip Watts. These ships, with a 3,800-ton displacement on a 354-foot hull, were smaller than a frigate by today’s standards but in the late 19th century, with a battery of a half-dozen 6-inch (152mm) guns and Harvey armor that ranged between 0.75 inches on their hull to 4.5-inches on their towers, were deemed protected cruisers.

For batting away smaller vessels, they had four 4.7-inch (120mm) Armstrongs, 14 assorted 57 mm and 37mm quick-firing pieces, and three early Nordenfelt 7mm machine guns. To prove their worth in a battle line, they had three torpedo tubes and a brace of Whitehead 18-inch fish with guncotton warheads. They would be the first ships in the Brazilian fleet to have radiotelegraphs and were thoroughly modern for their time.

However, their four Vosper Thornycroft boilers and turbines, augmented by an auxiliary sailing rig, could only just make 20 knots with everything lit on a clean hull.

The lead ship of the proud new class would bear the name of Admiral Francisco Manuel Barroso da Silva, the famed Baron of the Amazon, who led the Brazilian Navy to victory in the Battle of Riachuelo during the Triple Alliance War in 1865, besting a fleet of Paraguayans on the River Plate, and would be the fourth such ship to do so. 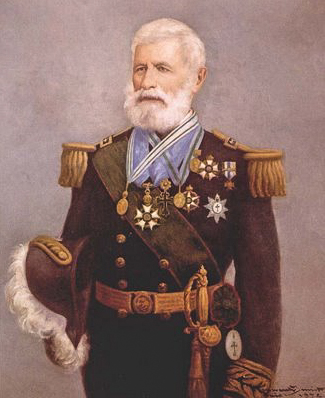 Nonetheless, financial pressures soon limited the Brazilian shipbuilding program and, with each of the Barroso-class cruisers running ₤ 265,000 a pop, the fourth ship of the class was sold while still on the builder’s ways to Chile, who commissioned her as Ministro Zenteno.

The U.S., up-arming for a coming war with Spain, purchased two other incomplete Barrosos in 1898 — Amazonas and Almirante Abreu— that were commissioned as the USS New Orleans and USS Albany, respectively.

One of six 6-inch main guns of the US Navy protected cruiser New Orleans originally ordered in England for Brazil as Amazonas. Note the Marine with his Lee Navy rifle at the ready.

The Brazilians also sold the Americans the old dynamite cruiser Nictheroy, though without her guns.

In the end, only Almirante Barroso (Elswick Yard Number 630) was the only one completed for Brazil, commissioned 29 April 1897. 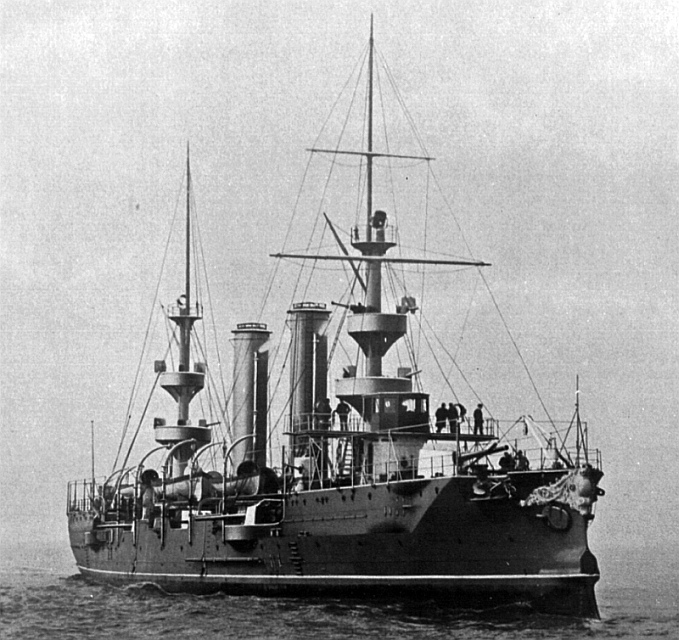 As completed with her typically English scheme of the 1890s

Her naval career was one of peacetime showmanship and diplomatic visits, taking President Campos Sales to Buenos Aires on a state visit in 1900, serving as the flagship of the Naval Division, making a trip to the Pacific in 1907 and the U.S.– shown in the first image of this post above– as well as other state visits.

Subsequent trips took her as far as the Middle East and Africa.

With Brazil escaping involvement in the Great War that engulfed the rest of the war from 1914-17, Barroso enforced her country’s neutrality and kept an eye on interned ships during that conflict until switching to a more active campaign looking for the rarely encountered Germans in the South Atlantic after Brazil entered the war on the Allied side in late 1917. 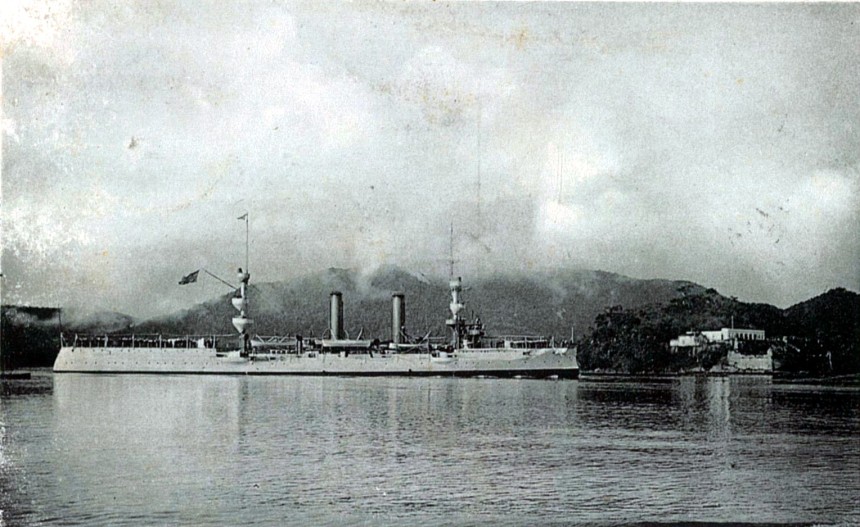 Barroso with her post-1905 scheme from a postcard of her at porto de Santos.

By the 1920s, obsolete in a world of 30+ knot cruisers with much more advanced armament and guns, Barroso was used as a survey and navigation training vessel.

By 1931, she was disarmed and turned into a floating barracks, ultimately being written off sometime later, date unknown.

Her 4.7-inch Armstrong mounts and 57mm Nordenfelts were installed in Fort Coimbra at Moto Grosso on the left bank of the Paraguay River, where they remained in service into the 1950s.

When the fort was turned over for preservation, they were repurposed and put on display.

Her sisters, ironically, all suffered a similar fate though Barosso outlived them.

Chile’s Ministro Zenteno sailed the world far and wide only to be laid up in the 1920s and scrapped in 1930.

USS New Orleans was bought from Brazil while under construction in England. Catalog #: NH 45114

New Orleans exchanged gunfire with Spanish shore batteries off Santiago in 1898 but missed the big naval battle there while off coaling. She went on to perform yeoman service as flagship of the Cruiser Squadron, U.S. Asiatic Fleet for several years and patrolled the coast of Mexico during the troubles there in 1914. Escorting convoys across the Atlantic in World War I, she ended up at Vladivostok in support of the Allied Interventionists in the Russian Civil War. She was sold for scrapping on 11 February 1930.

Albany missed the SpanAm War, being commissioned in the River Tyne, England, on 29 May 1900. Sailing for the Far East from there where she would serve, alternating cruises back to Europe, until 1913 she only went to the U.S. for the first time for her mid-life refit. Recommissioned in 1914, as was her sister New Orleans, Albany served off Mexico, gave convoy duty in WWI and ended up in Russia. With the post-war drawdown, she was placed out of commission on 10 October 1922 at Mare Island and sold for scrap in 1930.

A single 4.7-inch Elswick Armstrong gun from each of these English-made Brazilian cruisers in U.S. service is installed at the Kane County, Illinois Soldier and Sailor Monument at the former courthouse in Geneva, Illinois.