Here we see the lead ship of the Armada Española’s Canarias-class heavy cruisers– the mighty Canarias herself– in her pre-1953 arrangement. The big cruiser, though laid down in the 1920s, survived the Spanish Civil War and, in the end, even Franco himself.

The Spanish Navy of the old days was a colonial power and was very good at it for several hundred years until the 19th Century saw her Latin American holdings disappear along with, after the Spanish-American War, the crown’s Pacific Empire. Said conflict with the U.S. saw most of the Armada’s cruisers destroyed or captured in uneven fleet actions in the Caribbean and Manila Bay.

Post-1898, after losing or condemning 19 of her cruisers 21, all that was left was the old Velasco-class protected cruiser Infanta Isabel and the 5,000-ton Lepanto, finished just too late for the war. Three single-class new ships were quickly built using lessons learned in the conflict: Emperador Carlos V, Rio de la Plata, and Extremadura, followed by the three ships of the Princesa de Asturias-class and the Reina Regente, ordered in conjunction with the three 16,000-ton mini-battleships of the España-class in 1909. This is the fleet the Spanish carried into the Great War, where they were an armed neutral.

In the 1920s, with their turn-of-the-century, coal-fired cruisers and dreadnoughts increasingly obsolete, and colonial conflicts such as the Rif War in North Africa draining resources while still setting the need to show the flag in far-away ports, the Spanish ordered the one-off Reina Victoria Eugenia (6,500 tons), two similar 6,300-ton Blas de Lezo-class cruisers, three very modern Almirante Cervera-class cruisers (9,385-tons, based on the Royal Navy’s Emerald-class) and planned for three 13,700-ton Canarias-class ships, with the plan to put the older WWI-era fleet to pasture and phase out their increasingly marginalized battleships.

Based on the British Crown County-class ships of Sir Philip Watts’ design but switched up to a degree, these 636-foot heavy cruisers were handsomely equipped with eight 8″/50 (20.3 cm) BL Model 1924 Mark D Vickers-Armstrong-designed guns, each capable of sending a 256-pound AP shell out to 32,530 yards every 20-seconds. 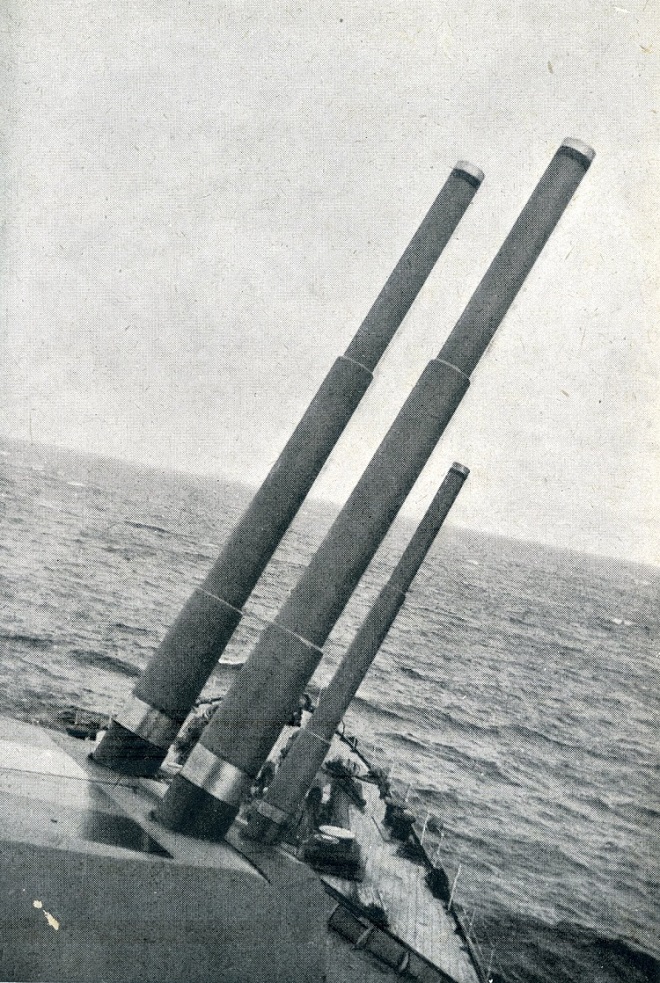 These things had some reach…

Note the “Todo por la Patria” (All for the Fatherland) logo. The 4.7″ guns would pick up splinter shields after the Civil War 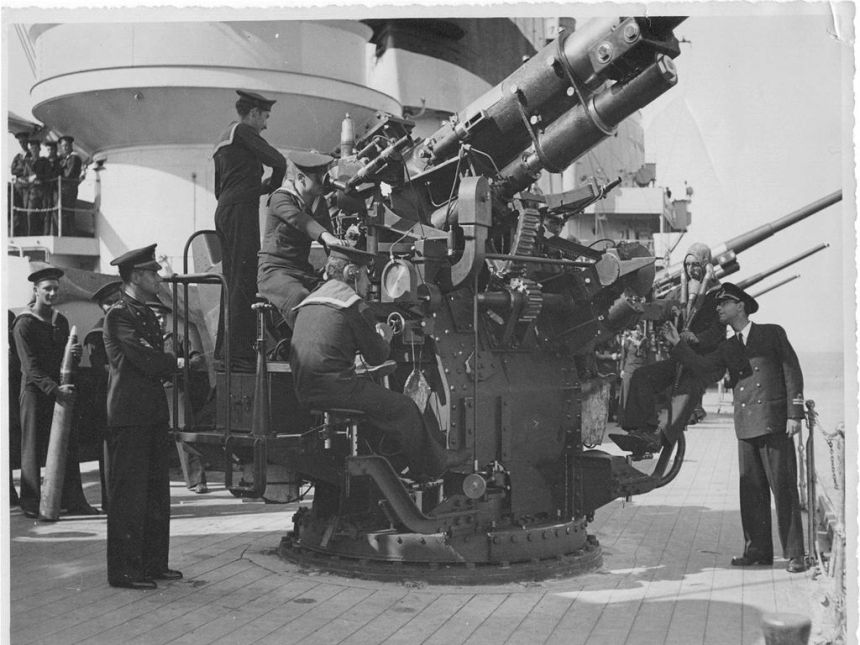 Note the shell to the left

A dozen torpedo tubes, some smaller weapons, and a catapult for Heinkel He 60 seaplanes– one of the most dieselpunk-looking aircraft ever in my opinion— were to be fitted.

Overall speed on Parsons geared steam turbines was 33-knots and the range was sufficient to sortie to the Spanish outposts in the Moroccan shores, Western Sahara and Equatorial Guinea.

Two vessels, class leader Canarias (Canary Islands) and sister Baleares (Balearic Islands) were laid down at Sociedad Española de Construcción Naval (SECN) in El Ferrol in 1928 and took more than eight years to construct, both still only semi-complete by 1936–a pivotal year for Spain. The third ship of the class, Ferrol, was canceled due to tight budgets.

At Ferrol, colorised by Postales Navales

In July 1936, a pro-fascist military coup led by Gens. Goded and Franco in colonies outside of Metropolitan Spain quickly spread to all-out civil war with the Soviet-allied Republicans against the German-Italian-backed Nationalists.

Suffice it to say without chronicling the entire Civil War, the Spanish Navy took a beating in the three-year conflict. 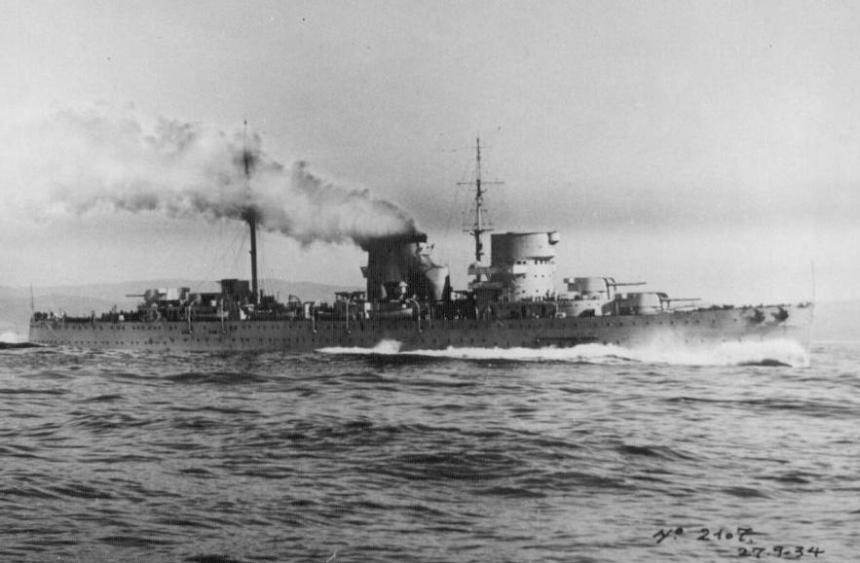 On her trials, where she broke 33.8-knots at 99,000 shp. Note much of her equipment including her rangefinders and Turret C is yet to be fitted– and she never did get that seaplane rig

-Canarias‘ own sister ship, the Nationalist-controlled Baleares, was sunk in a battle with Republican destroyers at Cape Palos in March 1938. 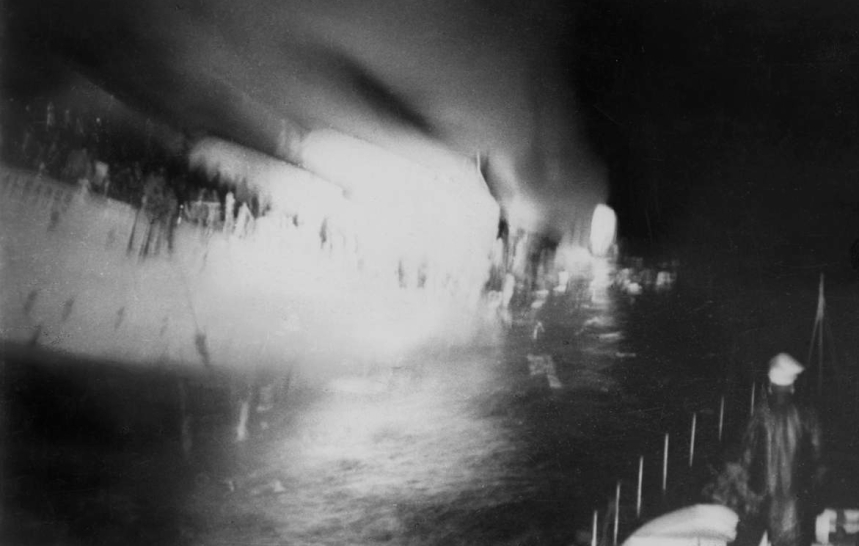 -While steaming off Santander on 30 April 1937, the Nationalist-controlled battleship Alfonso XIII struck a mine and sank.

-Spain’s last remaining battleship, Jaime I, was under the Republican flag and was struck by German bombers and eventually sunk by the Nationalists.

-The cruisers Miguel de Cervantes, Libertad, and Mendez Nuñez, part of the Republican Navy, escaped at the end of the war and were interned by the French at Bizerte only to be repatriated later in poor condition.

-Of the other ships in the Nationalist Navy, only the light cruiser Almirante Cervera escaped the war largely intact and was Canarias‘ partner in crime.

-The cruiser Reina Victoria Eugenia, renamed Republica by the Republicans and then Navarra by the Nationalists after they recaptured her, also survived though was less functional than either Cervera or Canarias.

The Civil War saw Canarias as the de facto flag of Franco’s fleet, especially after the loss of Alfonso XIII, their only battleship.

Note her 4.7-inch secondary guns amidships at elevation and that she has all four turrets for her main battery 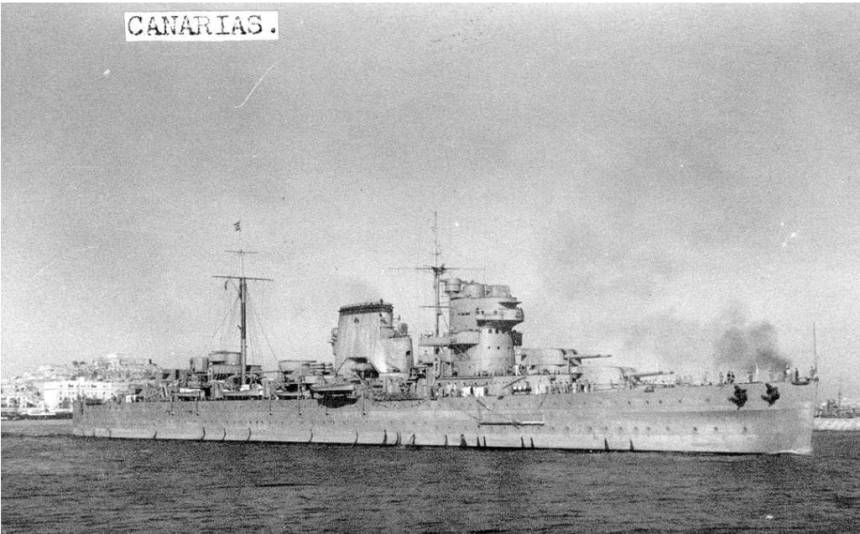 A good picture of the cruiser Canarias in her original configuration.

The big cruiser plastered Republican positions near the coastline including bloody work along the Malaga-Almeria highway and in the bombardment of Barcelona, intercepted Soviet merchant ships headed to the Republicans with arms, and engaging Republican ships in naval actions– including vaporizing the Churruca-class destroyer Almirante Ferrándiz off Cape Spartel with three salvos of her big 8-inch guns.

In 1938, she almost captured the Republican destroyer Jose Luis Diez, who only narrowly made it to Gibraltar and internment carrying an 8-inch hit in her stern. During the war, she reportedly fired her guns in anger on at least 34 occasions.

In WWII, while Franco never officially entered the war despite being an ersatz Axis state, Canarias and Cervera were the Spanish Navy’s most effective units and the big cruiser put to sea in 1941 to help look for survivors of the German battleship Bismarck after the failed Operation Rheinübung. While she found no survivors after a three-day search of the fallen dreadnought’s debris field, they did recover some wreckage and five bodies.

During the war, she picked up 12 Rheinmetall 37mm AAA guns in a tertiary battery.

Post-VE-Day, she remained the most powerful naval unit under the Spanish flag and in 1952-53 underwent modernization at SECN that saw her wide Lexington-like funnel separated into two stacks as well as navigational and search radar fitted. Her torpedo tubes were landed. 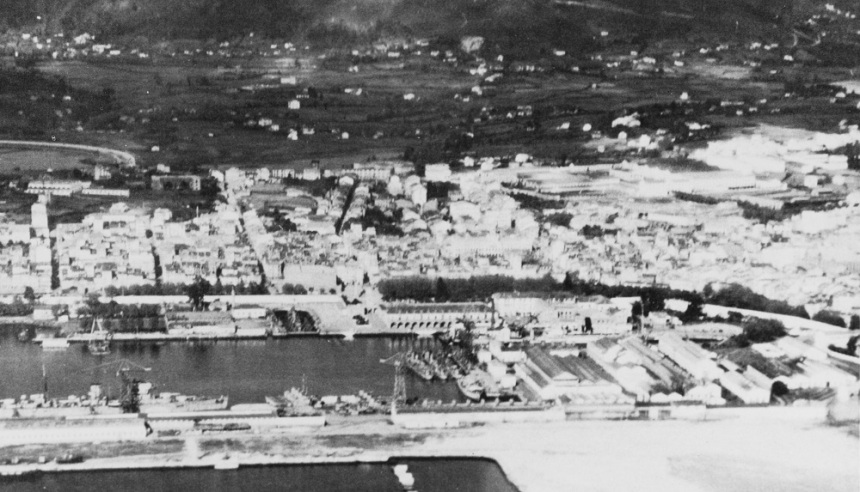 View of the northeast section of basin #1, El Ferrol, looking northwest. Two graving docks appear, one partially hidden by shops in the right middle ground. In the left foreground is the cruiser CANARIAS with her new after stack in place but without her new forward stack. This refit occurred between October 1952 and February 1953. Some destroyers and smaller craft are also visible. Description: Catalog #: NH 93640

She helped support the Spanish Legion in the little-known Ifni War in 1957-58 which included some very muscular gunboat diplomacy against Morocco.

At Ceuta in 1960> Note, she is wearing her pennant number on her hull

Then came the hijacking of the Portuguese liner Santa Maria in 1961 which saw Canarias chase her across the Atlantic, cooperating with a U.S. Navy task force that also shadowed the cruise ship more than 20 years before the better remembered Achille Lauro hijacking. An important development considering Spain did not join NATO until 1982.

In 1969, Canarias helped evacuate the Spanish from Equatorial Guinea as that Central African country gained independence from the ever-shrinking empire, a fitting final act for a colonial cruiser.

She had outlasted all the other Spanish cruisers, with the three Almirante Cervera-class ships all striking by 1970, Mendez Nuñez retired in 1964, and Navarra paid off in 1955.

By that time, she was among the last all-big-gun cruisers left in the world. The British had broken up their last Crown Colony/Fiji-class near sister ships in 1968, though two, HMS Newfoundland and HMS Ceylon, continued to operate with the Peruvian Navy into the 1970s and one, Nigeria, served the Indian Navy as INS Mysore (C60) until 1985.

CANARIAS Photographed in Barcelona, Spain, in about 1970. Note the large tower to the right for the gondola transport system going across the harbor. The 371-foot four-masted training barque Juan Sebastián Elcano is to her stern. Description: Catalog #: NH 90743

The end game came for Franco in 1975, as the Green March wrested Spain’s hold in the Sahara and the overseas colonies shrank to the current lot that are the isolated cities of Ceuta, Melilla, and the Canary Islands. The old dictator himself marched off to the parade ground of lost souls that November.

Pushing 40 and considered obsolete for the last 30 of those years, Canarias was pulled from service and decommissioned on 17 December 1975, the end of an era. She had steamed 650,000 miles on 524 trips in her career.

While several cities sought to preserve her as a museum– including some she had bombarded in the Civil War– the money just wasn’t there and the old war wagon sailed to the breakers under her own steam in September 1977. 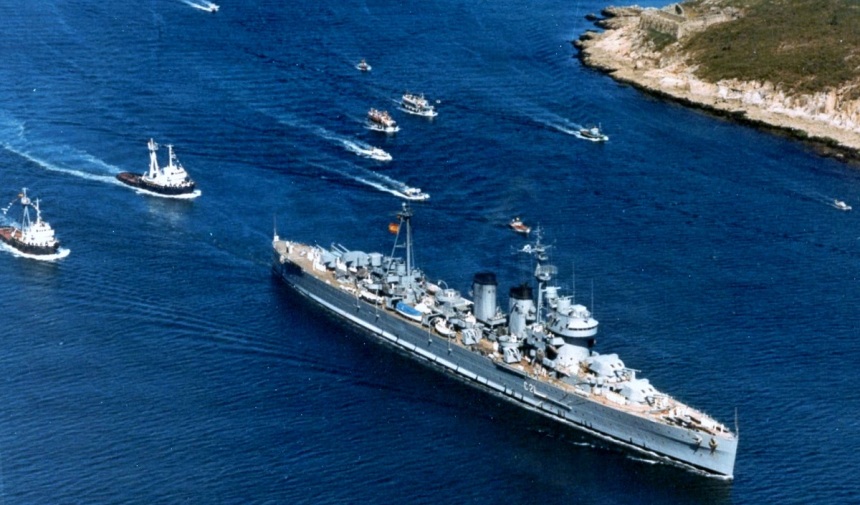 Sailing past the Castillo de San Felipe at Ferrol

Parts of her were saved, however, including turret B and the entire admiral’s cabin interior at the Naval Academy at Marín, a 4.7-inch AAA at Las Palmas de Gran Canaria– the capital of the Canary Islands, a rangefinder at the Naval Museum at Ferrol, several anchors around Spain, and other items. 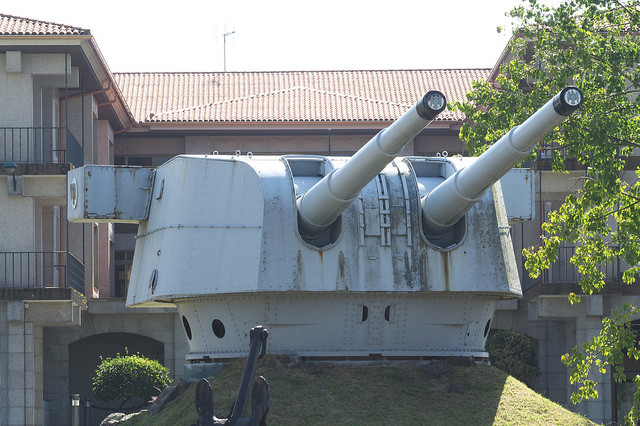 She is also remembered in maritime art.