Posted on December 6, 2017 by laststandonzombieisland 2 comments 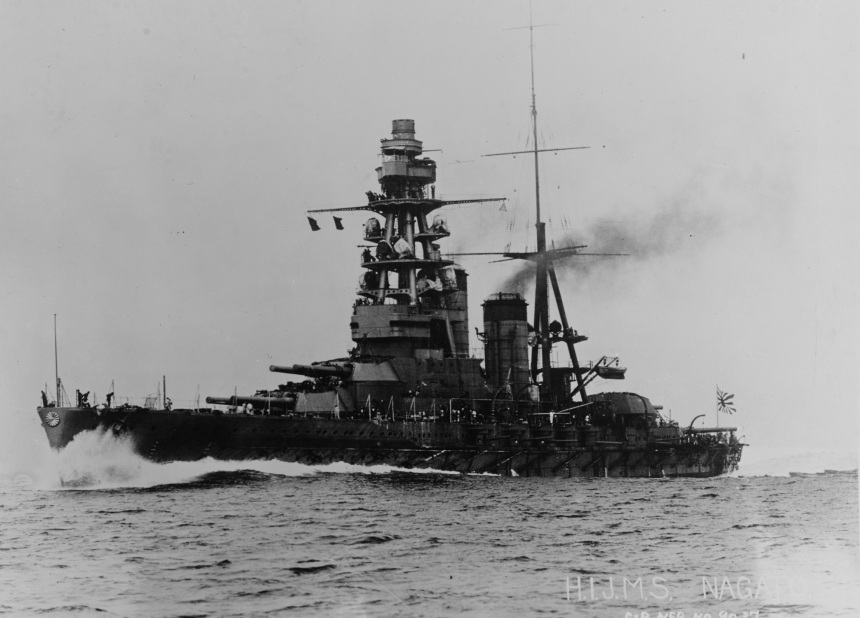 Here we see the lead ship of her class of fast super-dreadnoughts, the HIJMS Nagato photographed at the time of her completion. Ordered 100 years ago this August, she was Japan’s first battleship entirely planned and built domestically after generations of relying on British and American yards and firms. She would also be the Empire’s final battleship on active duty.

Laid down during WWI at Kure Naval Arsenal on 28 August 1917, Nagato is named for the historic castle-dotted province on the western end of Honshū. She was commissioned 15 November 1920 while Mutsu, built at the same time in Yokosuka, joined the fleet the next year.

As detailed in the most excellent website Combined Fleets (go there NOW for a complete rundown of Nagato‘s movements as well as anything about the Imperial Japanese Navy you are curious about) during her speed trial at Sukumo Bight, Nagato beat the world record for a battleship and made first 26.443 and then 26.7 knots and when commissioned became a flagship– and the first battleship in the world in service with 16.1-inch guns. 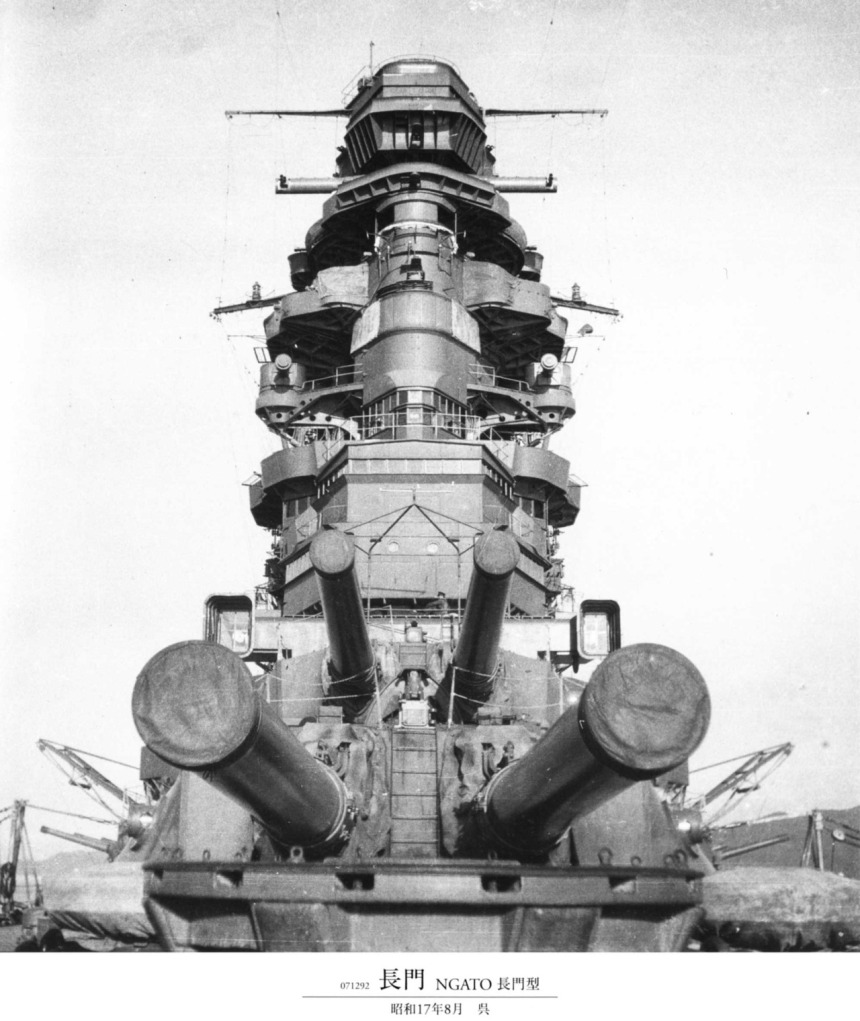 Her peacetime service was relatively happy and she was visited and toured not only by the Emperor several times but also King Edward VIII and German aircraft designer Ernst Heinkel, while Crown Prince Takamatsu Nobuhito served aboard her as a midshipman, as befitting her role showboat vessel. 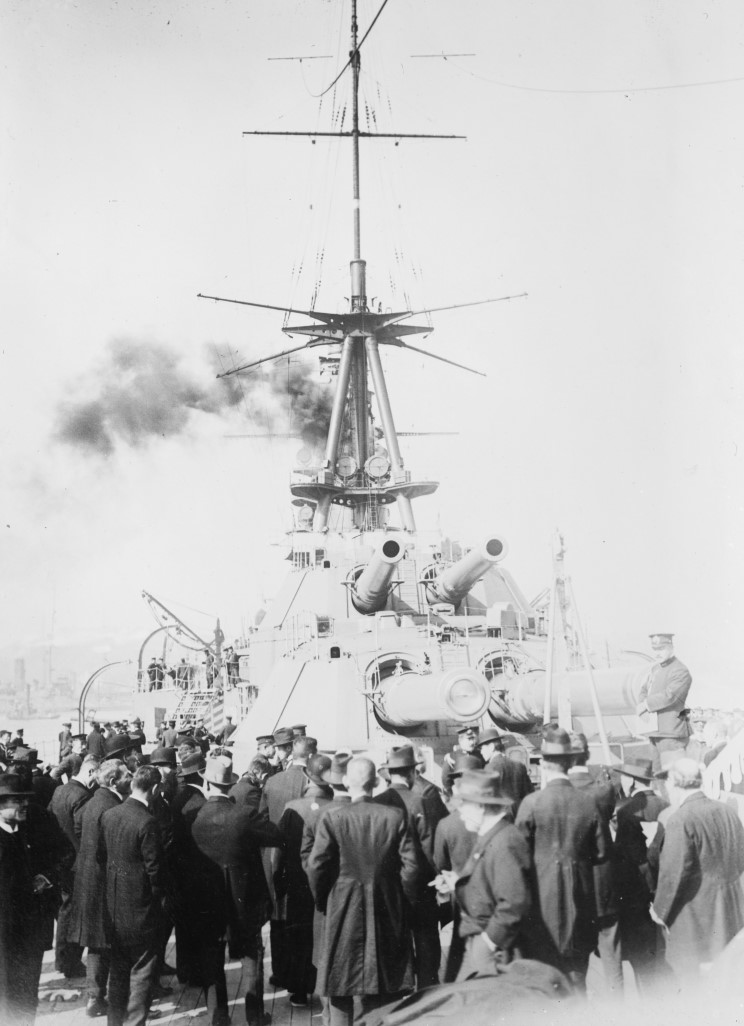 In August 1922, she helped cover the withdrawal of the Japanese interventionist forces at Siberia after the Russian Civil War and the next year helped provide relief for the Great Kanto Earthquake. 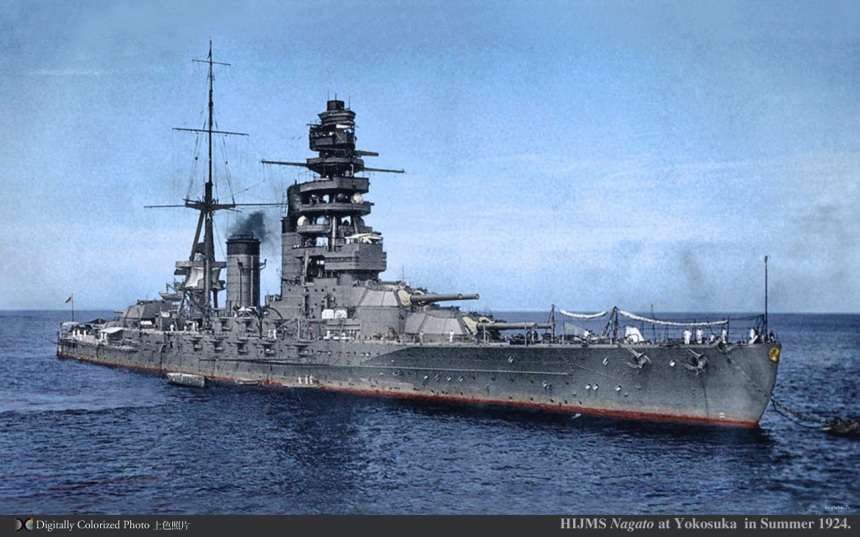 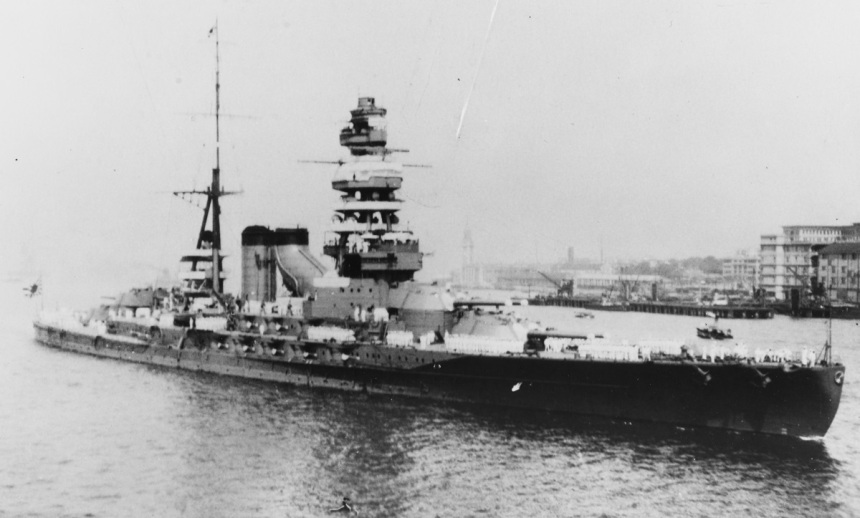 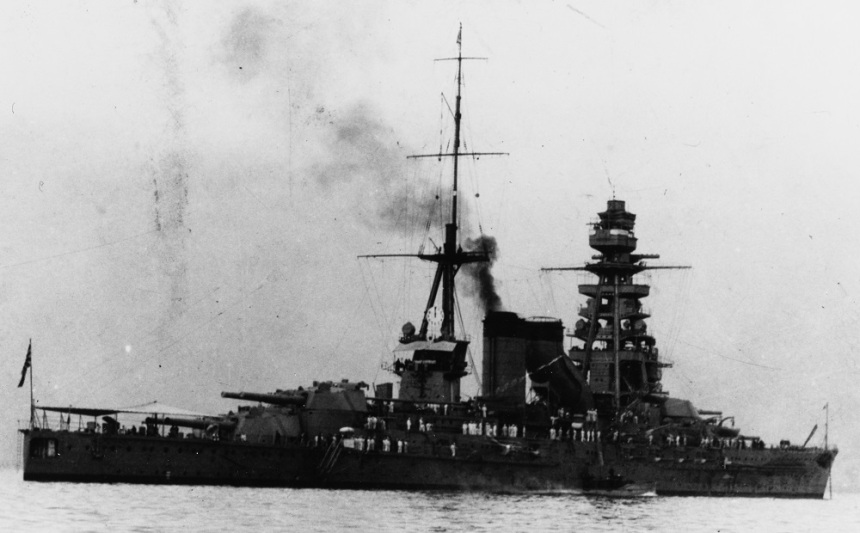 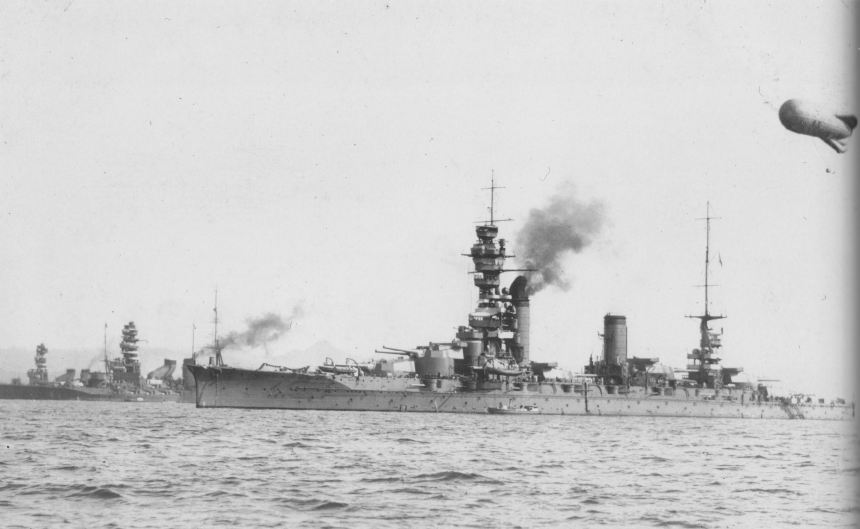 Between 1932-36, pushing about 15 years of service, she was modernized at Kure Naval Arsenal, her birthplace, where her bow was lengthened and modified, and she was given the more modern turrets from the unfinished battleships Kaga and Tosa— not completed due to the London and Washington Naval Treaties while a smaller battery of 76mm guns were replaced with 127mm rapid-fire models.

Her suite was replaced, and her topside arrangement changed significantly, losing a funnel and picking up a reshaped superstructure. At the same time, her electronics were revamped, and rangefinders updated. Her torpedo tubes, never really a serious weapon for a battleship, were removed but she picked up anti-torpedo bulges as well as a catapult and facilities for seaplanes, for which she would later carry a trio of Nakajima E8N1 Type 95 (“Dave”) floatplanes.

Battleship Nagato fires her main guns during an exercise in Sukumo Bay, Japan. 21 May 1936.

In 1937, she carried 1,700 Imperial troops to very active combat in Manchuria.

In 1938, as tensions increased, both Nagato and Mutsu gained a battery of 40mm and 25mm AAA guns.

As part of the Combined Fleet’s BatDiv 1, Nagato was the flagship of Adm. Yamamoto for Operation Z, the attack on Pearl Harbor, and, along with her sister and four other Japanese battleships, escorted the carriers to Hawaii for that day which will live in infamy, arriving back at Hashirajima on 13 December 1941. 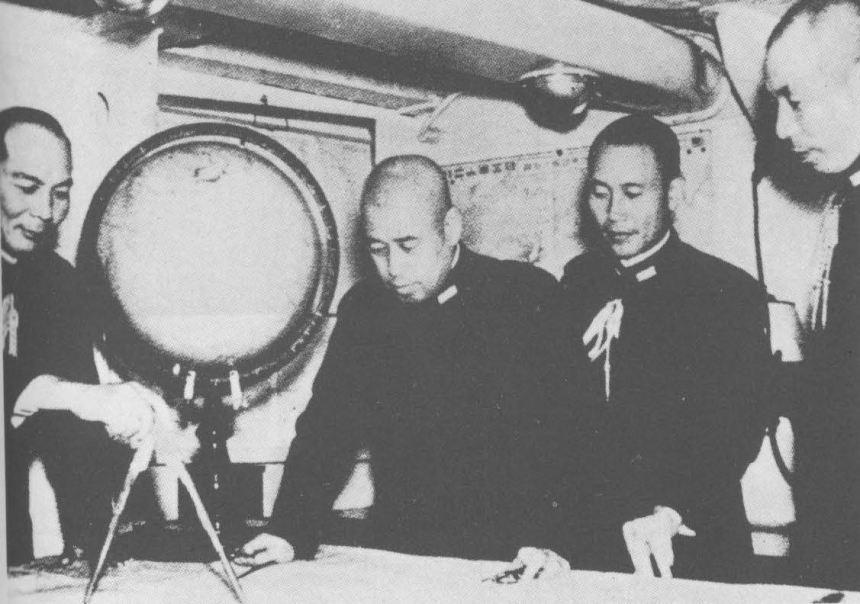 Nagato never made it closer than 350 miles from Hawaii’s coast, but her role as the command and control ship for the operation was pivotal.

For the next six months, while most Japanese battleships were engaged in the Philippines, Malaysia, and the Dutch East Indies, Nagato remained in the Home Islands and served a host to Prince Takamatsu’s headquarters (who was at that point a Captain). She then sortied out for the first time since Pearl Harbor to cover Nagumo’s carriers at Midway in June 1942, ending that operation by housing survivors from the carrier Kaga— whose turrets she ironically carried.

Back to Japan for another year as the war went on without her, the eternal flagship was not ordered out of the Home Islands again until August 1943 when she carried men and supplies to the outpost at Truk, where she remained until February 1944.

Her luck endured, and she was able to escape interaction with the Allied forces in the Pacific until her assignment to Operation “A-GO” in June 1944, a debacle that turned into what is now known as the Battle of the Philippine Sea, escorting carriers Jun’yō, Hiyō and Ryūhō. She would later pick up survivors of the Hiyō, though she did go down in ordnance history as firing 16.1-inch Sankaidan shrapnel shells at incoming U.S. Navy bombers.

She withdrew to Borneo to await round II. 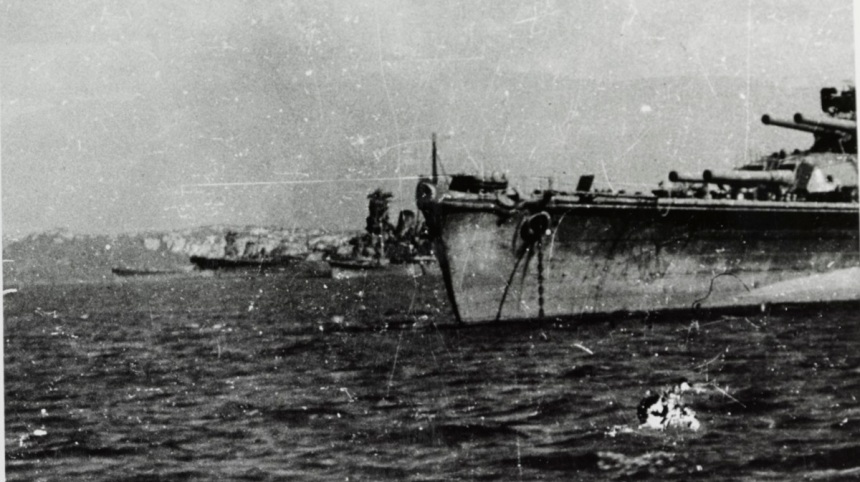 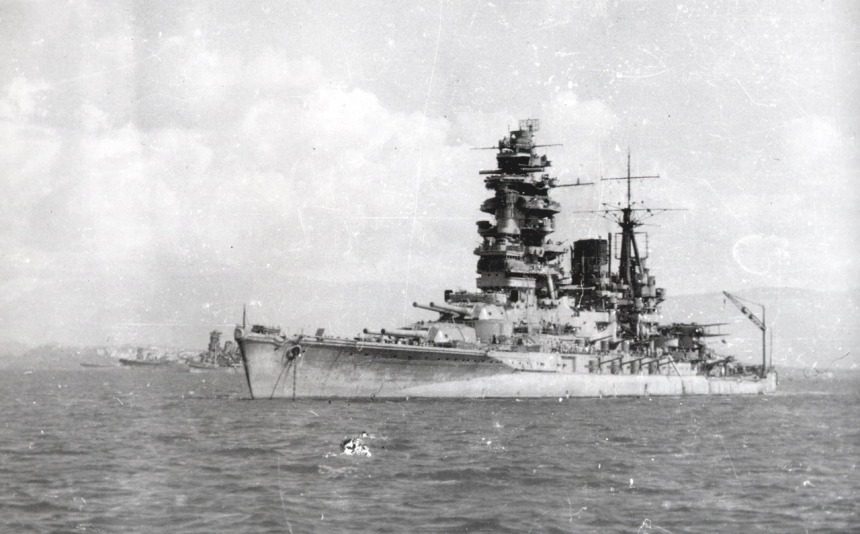 Musashi, Yamato, a cruiser, and Nagato at Brunei, Borneo. Oct 1944. At this point in the war, this was arguably the last untouched reserve in the Imperial Japanese Navy

By October, as part of the Battle of the Leyte Gulf, Nagato and the battleships Yamato, Kongō, and Haruna along with eight cruisers, came across Task Unit 77.4.3 (“Taffy 3”), commanded by RADM Clifton “Ziggy” Sprague, off Samar Island. Taffy 3 had six small escort carriers screened by seven destroyers/destroyer escorts. With a lopsided surface action looming and the option to run and leave the beachhead undefended not an option, Sprague directed his carriers to turn to launch their aircraft then withdraw towards the east while the tin cans took on the Japanese battleships.

While Nagato‘s gunnery was deemed by most accounts in the battle to be ineffective, at the end of the almost three-hour melee Sprague lost four ships—the destroyers Johnston and Hoel, the destroyer escort Samuel B. Roberts, and the escort carrier Gambier Bay— to naval gunfire while the Japanese traded severe damage to the battleship Haruna and four of their own cruisers but were forced to retire. Nagato came away from Leyte Gulf with five bomb hits and about 150 casualties. 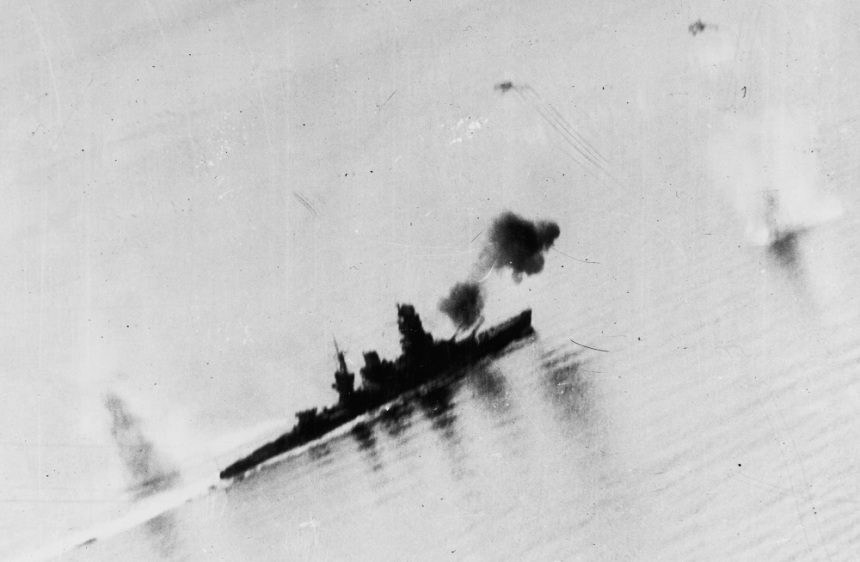 Battle off Samar, 25 October 1944 Description: Watercolor by Commander Dwight C. Shepler, USNR, depicting the counterattack by the escort carrier group’s screen. Ships present are (L-R): Japanese battleships Nagato, Haruna, and Yamato, with a salvo from Yamato landing in left center; USS Heerman (DD-532), USS Hoel (DD-533) sinking; Japanese cruisers Tone and Chikuma. Note: the original watercolor was commissioned specifically for the dust jacket of Samuel Eliot Morison’s “History of U.S. Naval Operations in World War II,” Volume XII, and reprinted in Volume XV of the same work. The painting was missing in 1973, so this photograph was made from the reproduction in the latter volume. Accession #: NH Catalog #: NH 79033-KN

Nagato returned to Yokosuka in November and remained there, largely an inactive floating anti-aircraft battery on shore power, for the rest of the war as the *last Japanese battleship still afloat. Her sister Mutsu was lost to an internal explosion in 1943 while the other 10 battleships in the Combined Fleet all went to the bottom between November 1942 (Hiei) and November 1944 (Kongo). (*the three hybrid battleship/carrier conversions Haruna, Ise and Hyuga, largley immobile, were still “afloat” as late as July 1945 when they were sunk or foundered at their moorings after U.S. air attacks, but almost totally inactive as was the converted target, the old battleship Settsu). 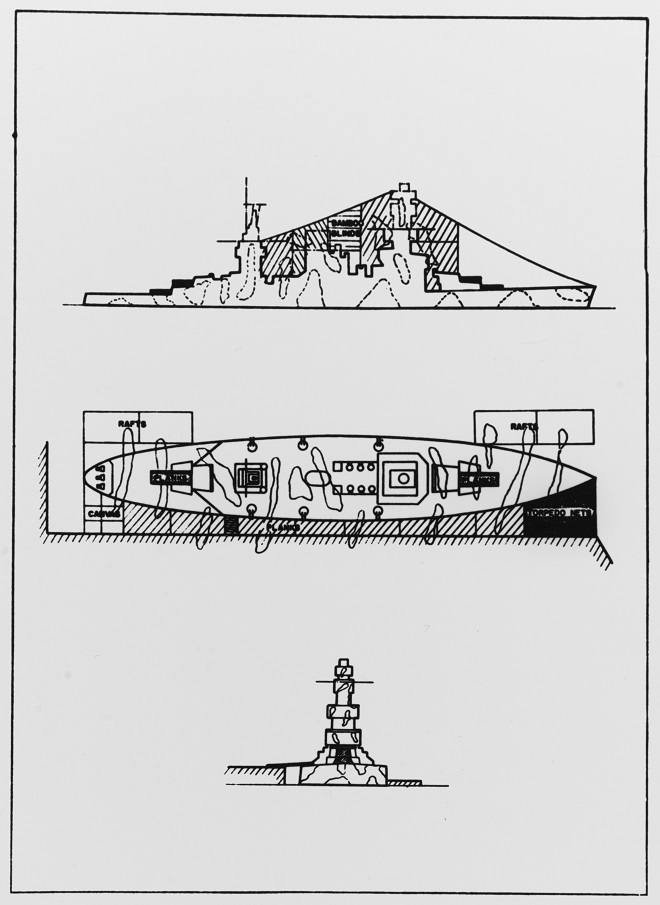 The scheme used on battleship NAGATO while moored at Yokosuka, from February 1945. Description: Catalog #: NH 82542

On August 30, 1945, as the official surrender loomed, Nagato was secured by the U.S. Navy under the guns of the USS Iowa with the ship’s XO, CPT. Cornelius Flynn, taking command of the prize crew. 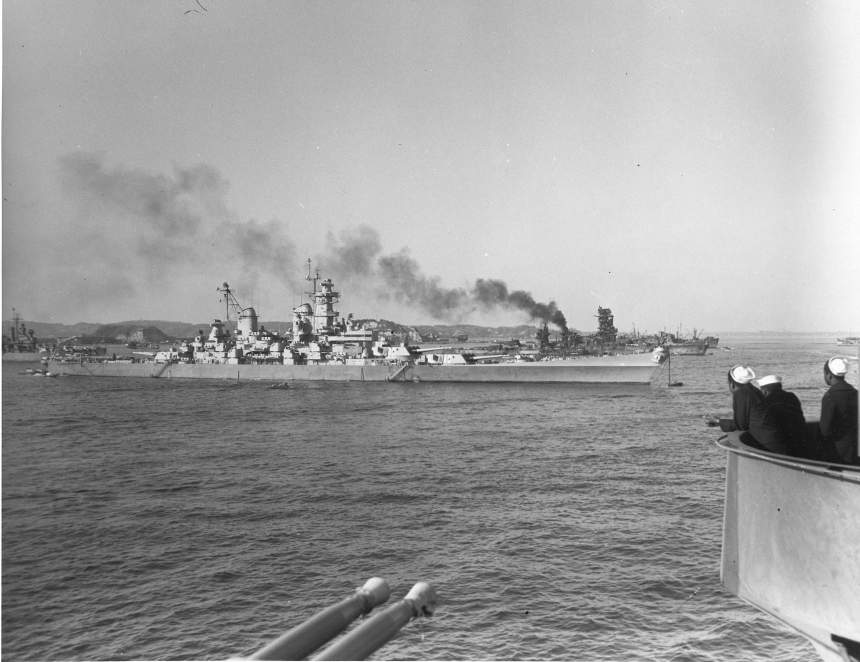 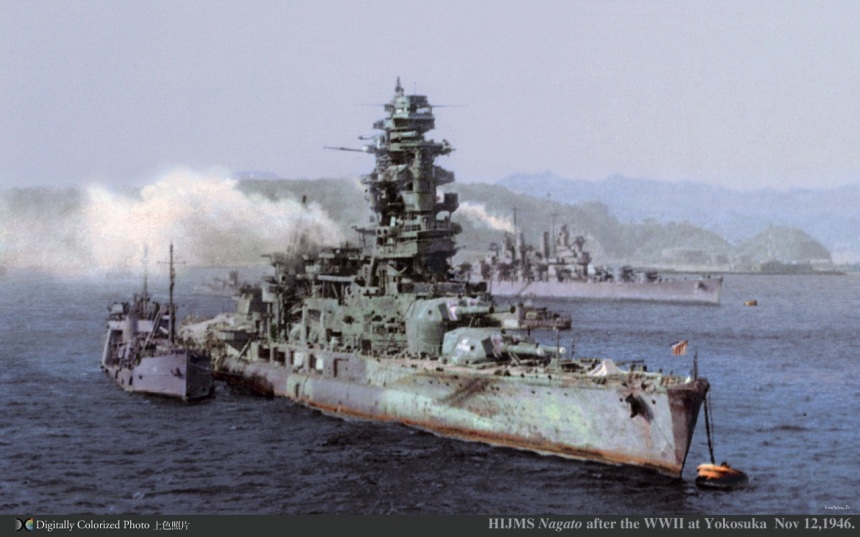 Her flags were captured, with several making their way to the U.S., including one that was at the National WWII Museum in New Orleans for a while. 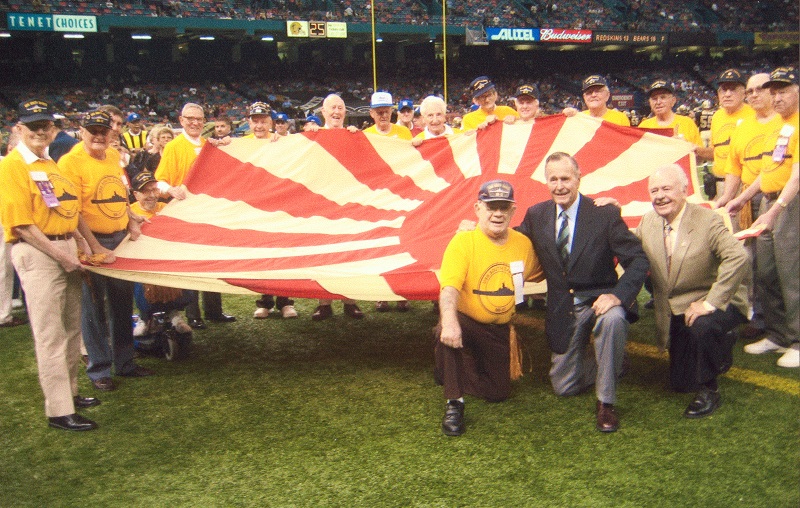 The crew of USS South Dakota (BB-57) and President George HW Bush with the NAGATO flag at a 2004 reunion in New Orleans. NHHC Accession #: UA 474

Nagato was then given front row seats at the atomic bomb tests at Bikini Atoll the next summer. She was just under a mile from the Test Able blast and about 950-yards from the underwater 40kt Test Baker, sinking five days after riding the tsunami of the latter. 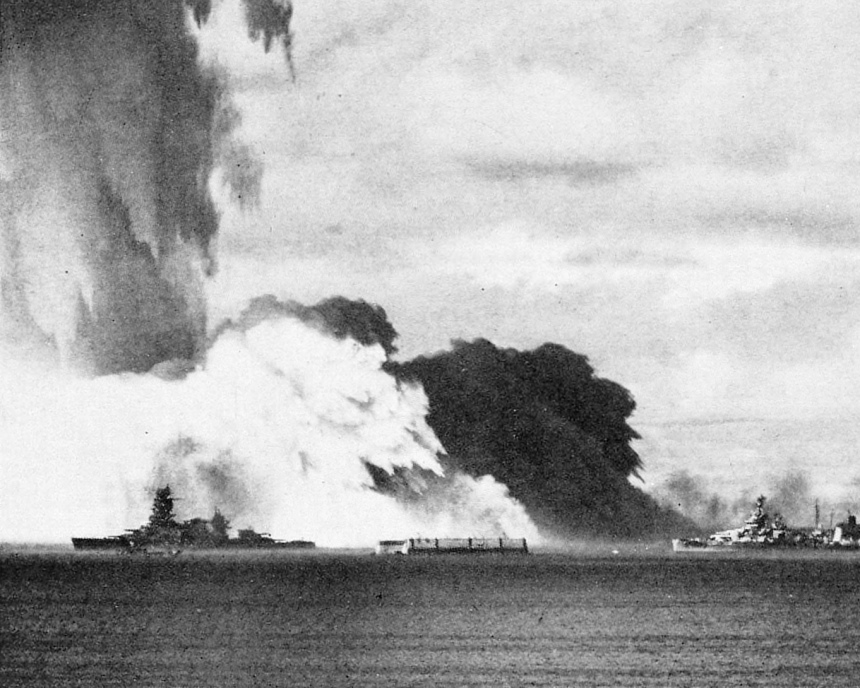 She is at the base of the mushroom 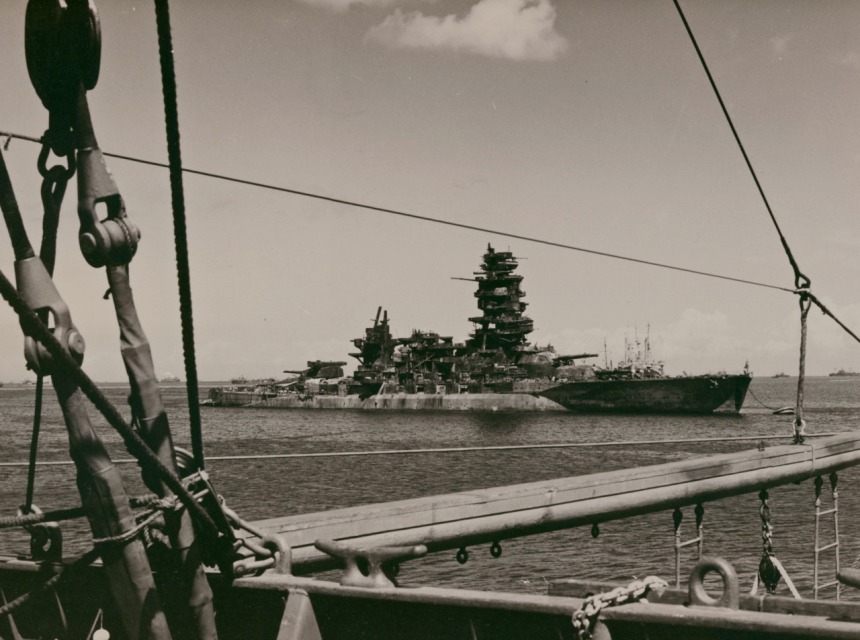 Note how wrecked she is 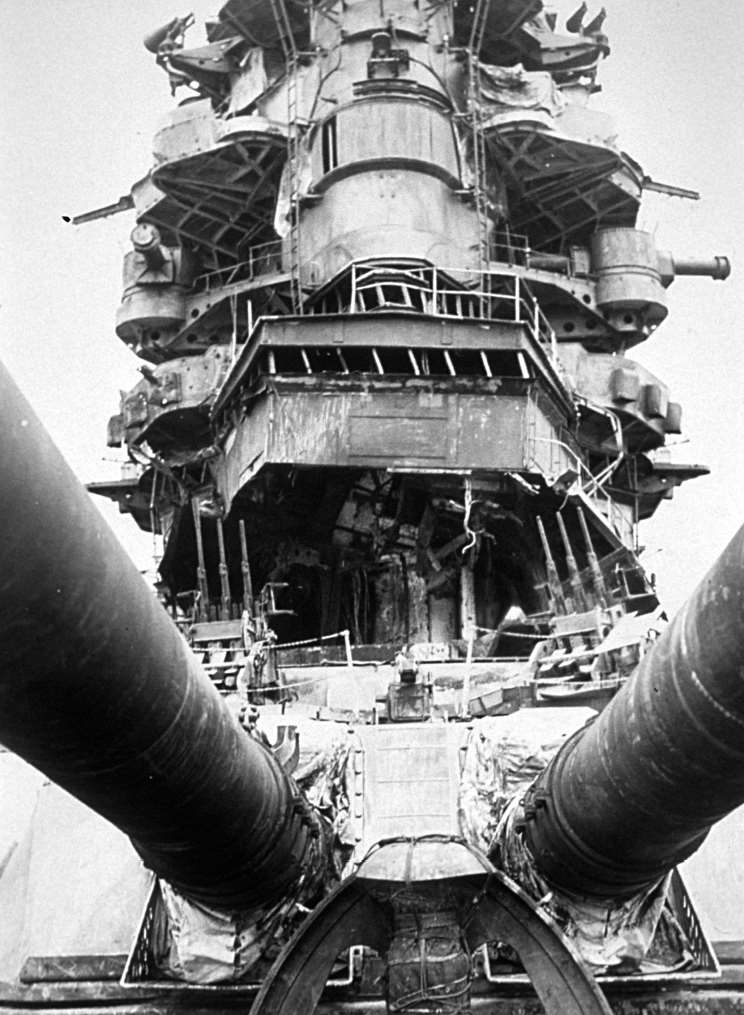 The battered superstructure of battleship Nagato after the Bikini Atoll atomic bomb test, 1946. 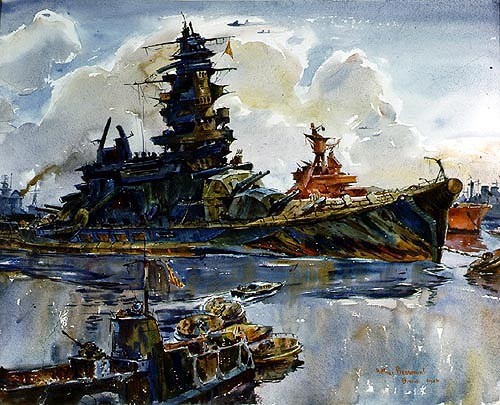 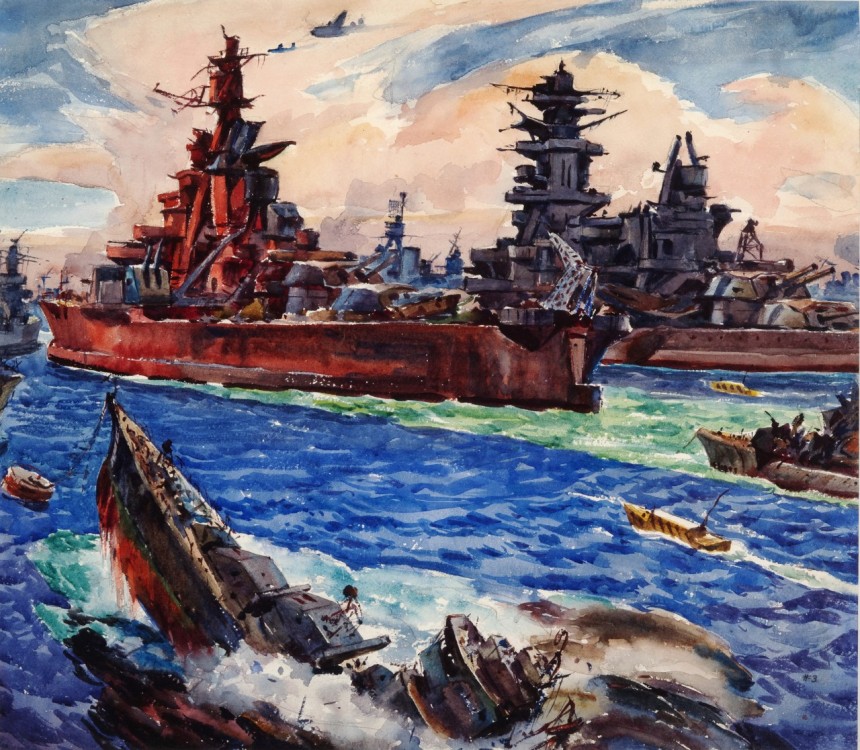 “The former Japanese cruiser Sakawa sank in frothy green waters the day after test ABLE. Damaged battleships USS Nevada (BB-36) and Nagato are in the background.” 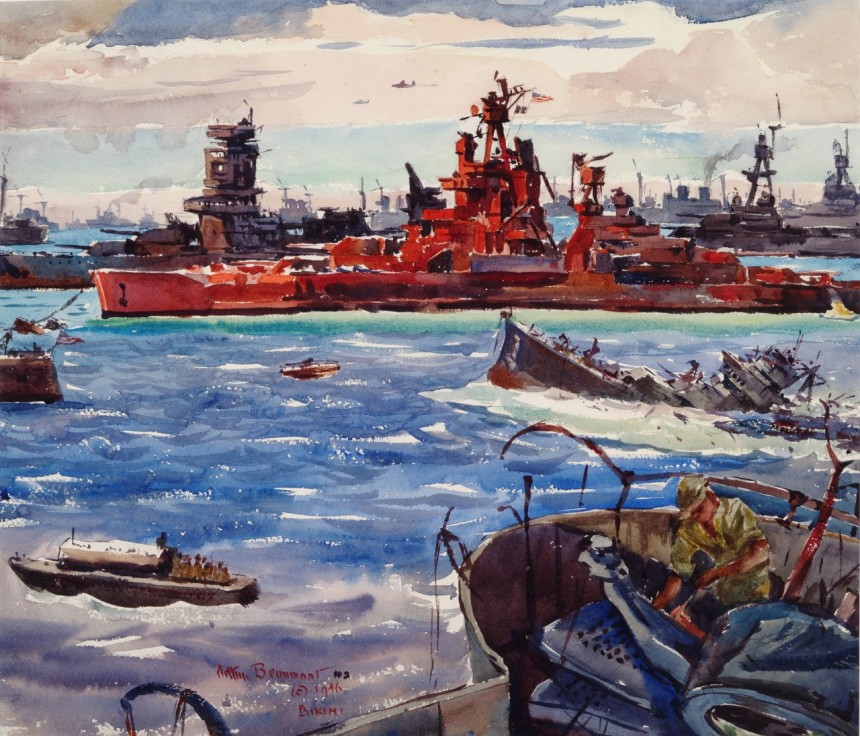 Another Arthur Beaumont watercolor. “A panoramic view of the fleet after test ABLE sketched from the bridge of USS Arkansas (BB-33). The ship in the middle is the scorched USS Nevada (BB-36), with Nagato behind and Sakawa sinking in the foreground.” 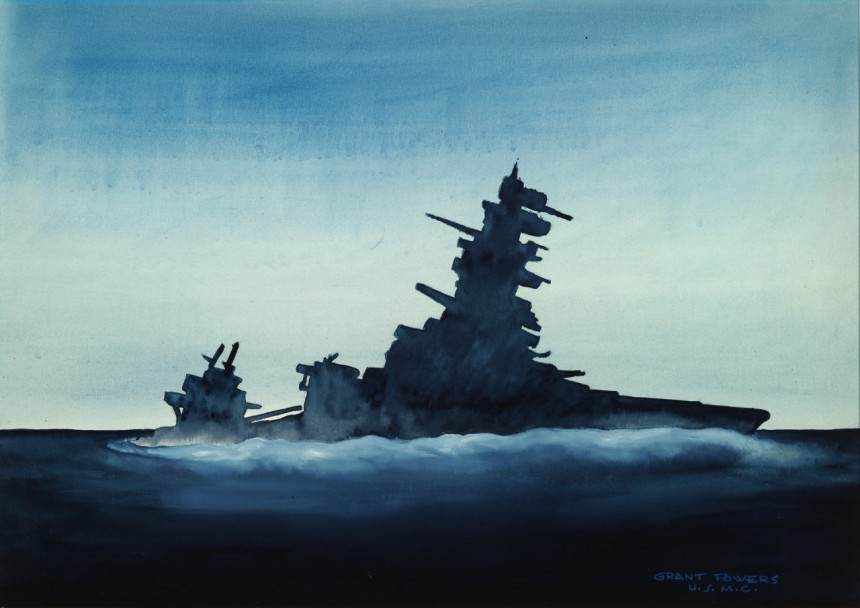 She rests on the bottom near USS Saratoga (CV-3) and USS Arkansas (BB-33). Just 100~ feet down, her hull is a hot spot for scuba divers from around the world.

Since her loss, the Japanese have erected a shrine to her, and Yamato. 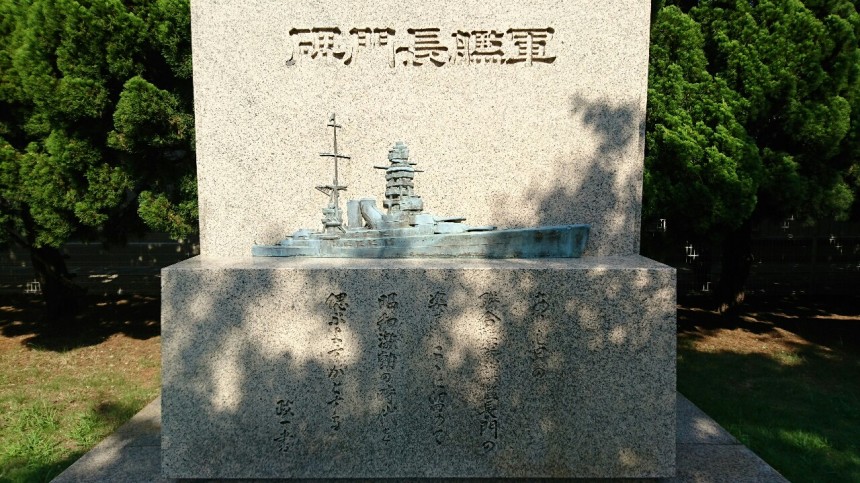 While one of her Kaigun ensigns is on display at the Yamato museum: 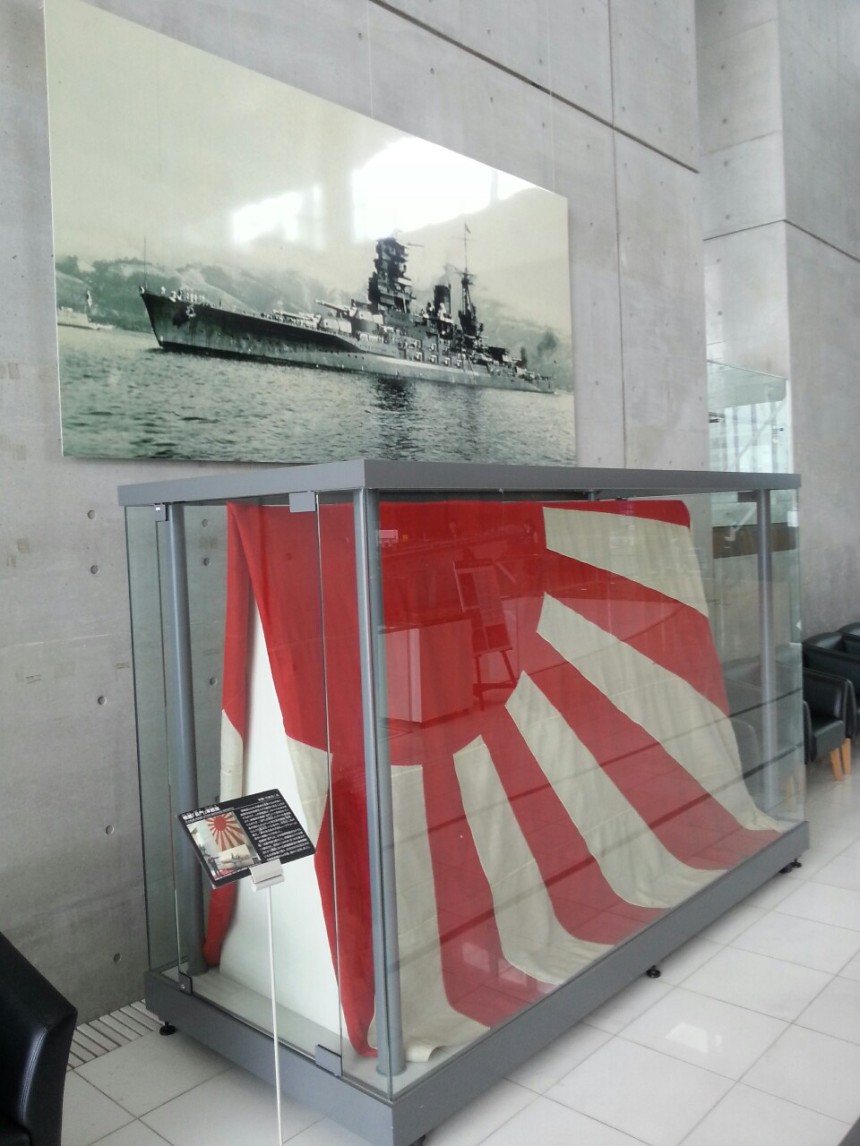 Another Imperial Japanese Navy flag recovered from Nagato by a Sailor assigned to high-speed transport USS Horace A. Bass (APD 124) in 1945 was donated to the National Park Service last year at the Pearl Harbor Visitor Center while a third, which had been on display at the USS Missouri at Pearl Harbor, was sent back to Nagaoka city, Japan last month in an emotional ceremony.

“It was extremely important for us to make a connection with Nagaoka city and to return the flag from the Missouri to its rightful home,” said Mike Carr, USS Missouri Memorial Association. 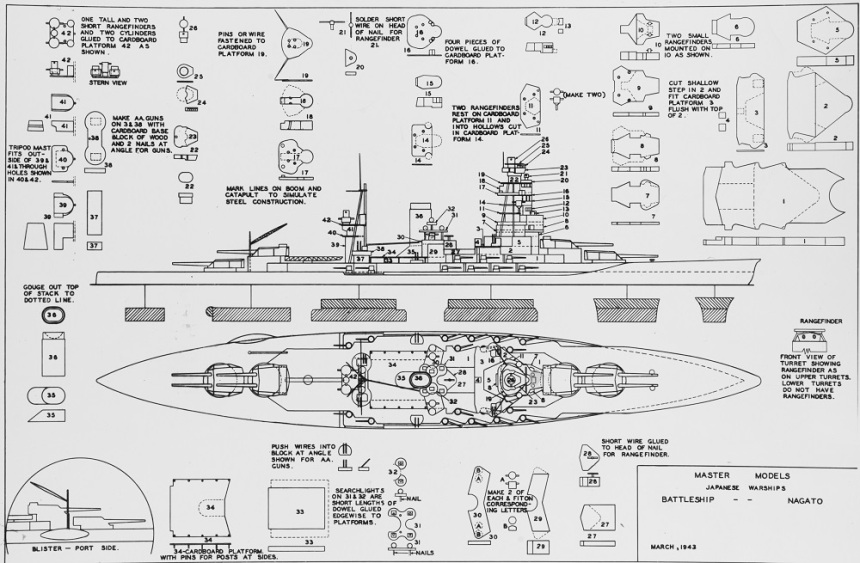