Warship Wednesday, Jan. 9, 2019: That time an icebreaker took on a (pocket) battleship

Posted on January 9, 2019 by laststandonzombieisland 2 comments

Warship Wednesday, Jan. 9, 2019: That time an icebreaker took on a (pocket) battleship 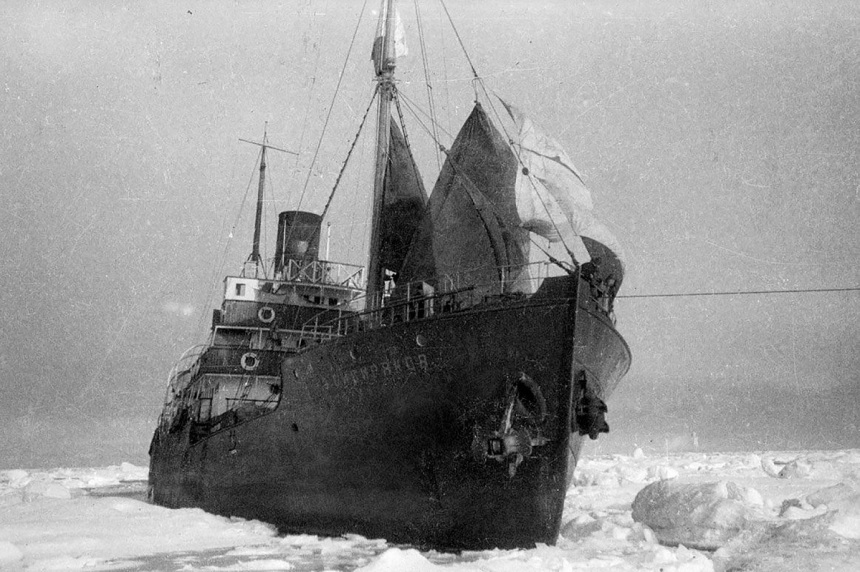 Here we see the hardy Soviet steel screw steamer/icebreaker Alexander Sibiryakov with a homemade sail rig somewhere in the frozen Northern Sea Route in 1932. Built as a Newfoundland (don’t say “Canadian!”) sealer, she sailed into maritime history when it came to polar exploration and met her end at the hands of a bruiser who was many times her match.

Ordered from the Scottish shipbuilding firm of D & W Henderson & Co., Glasgow as the SS Bellaventure by the Bellaventure S.S. Co. Ltd. of St. John’s Newfoundland in 1908, she was not very large (1132 grt / 471 nrt, 241-feet overall) but was designed to withstand the rigors of the polar seal trade. Completed the next year, she made seven trips searching for the lucrative marine mammals. Steam heated and electric-lighted, she could steam at 10 knots, burning through 13 tons of coal per day until her 292-ton bunker was bare. With accommodations for a 15-man crew, she could also accommodate 10 passengers in five staterooms that had access to a separate saloon that was “handsomely fitted up.” 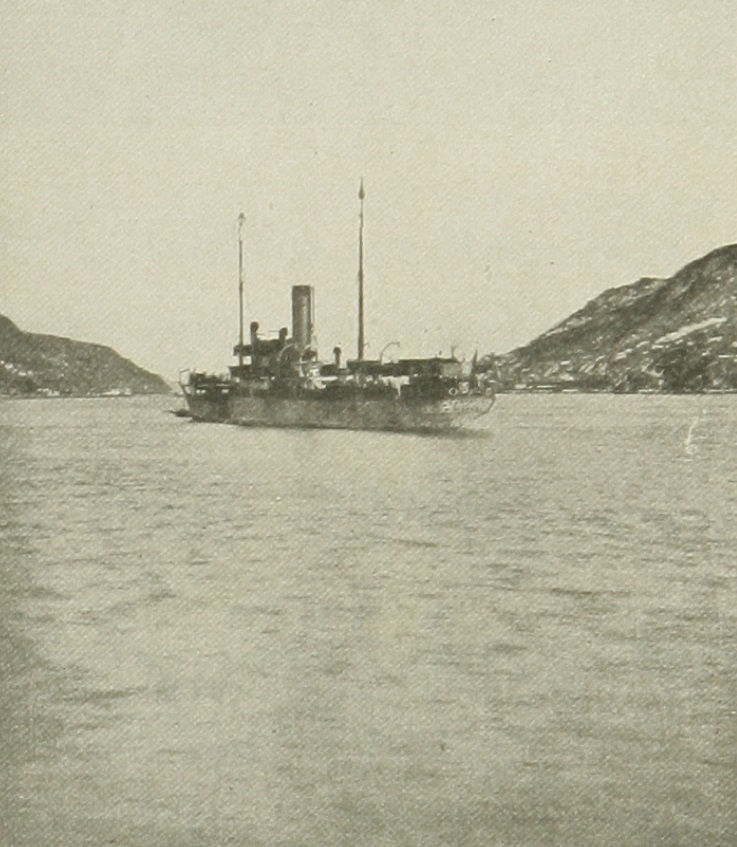 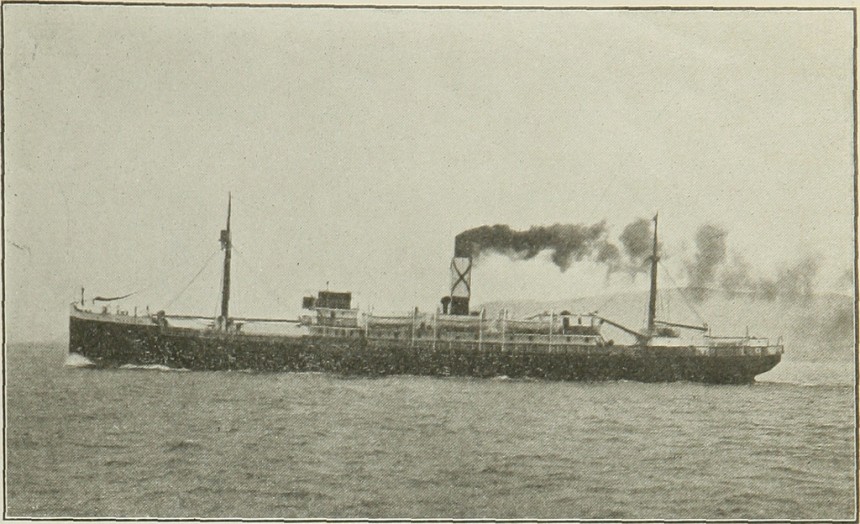 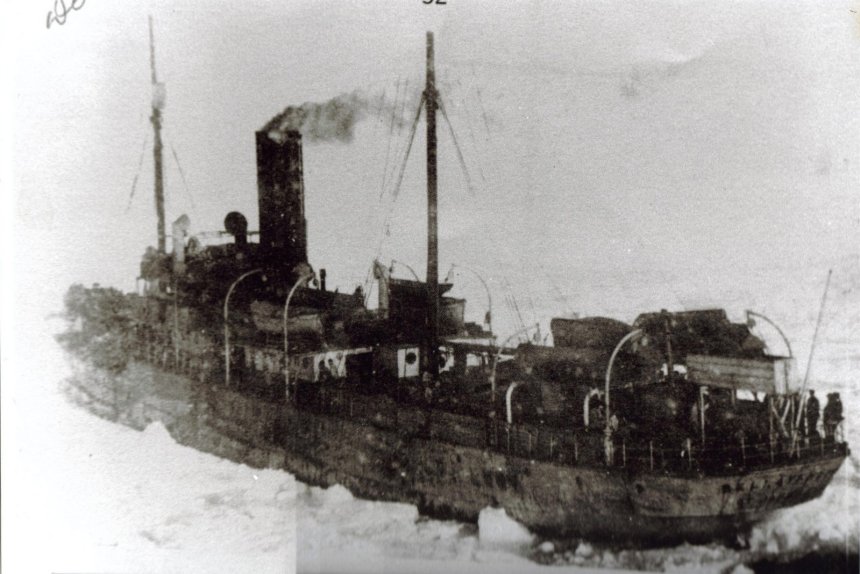 When the Great War erupted, the Tsar was soon looking for ice-protected ships as the Ottoman Turks’ entry into the conflict shut off the Black Sea and, with the Baltic barred by the Germans, Russia was a proverbial boarded-up house that could only be entered by the chimney– the frozen Barents Sea harbor of Murmansk (then just a hamlet with primitive facilities) and the White Sea port of Arkhangelsk.

Purchased by Russia in 1916, she was renamed Alexander Sibiryakov in honor of a gold mine magnate who financed a number of improvements in Siberia as well as various scientific expeditions and historical research projects. As a shooting war was on, she was given a high-angle 76mm gun, largely for appearance’s sake as German U-boats and surface raiders were scarce in the Barents during WWI.

Note her gun tub forward. She would pick up a 45mm gun on the stern in 1942 as well as a couple of machine guns 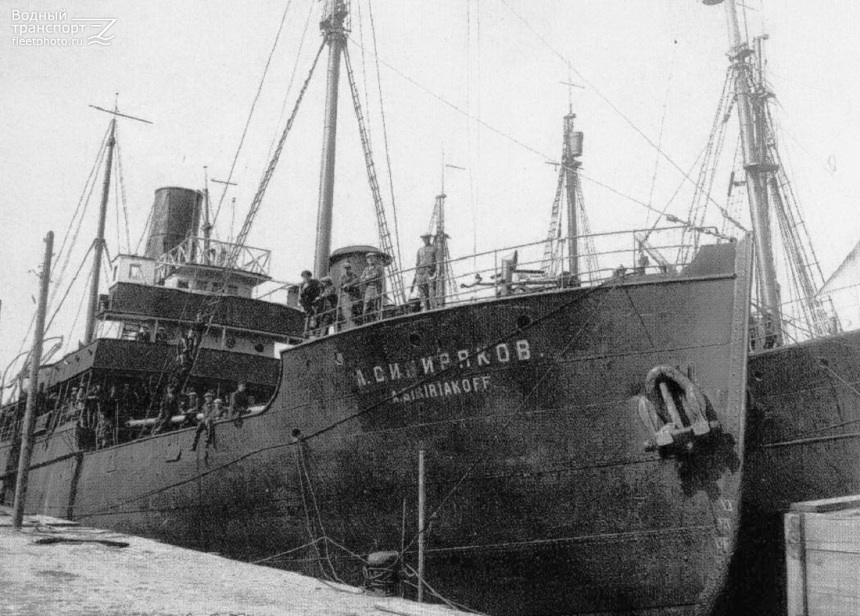 Briefly used by the White Russians of Lt. Gen. Eugen Ludwig Müller (also often seen as “EK Miller” in the West) during his control of the Kola Peninsula where he had declared himself Governor-General of Northern Russia in the resulting power vacuum that followed in the wake of the Russian Revolution in 1917, Sibiryakov was operated for a time commercially by the British Ellerman’s Wilson Line concern (the British were propping up the Whites) and helped evacuate Muller and his bunch to Norway when the Bolsheviks captured his former fiefdom in 1920.

Sibiryakov was returned to the Reds who, from 1921 onward, sent her into the White Sea to support the Russian the hunting industry, and provide the various Soviet polar stations wintering of the Arctic Ocean with food, equipment, and fuel. 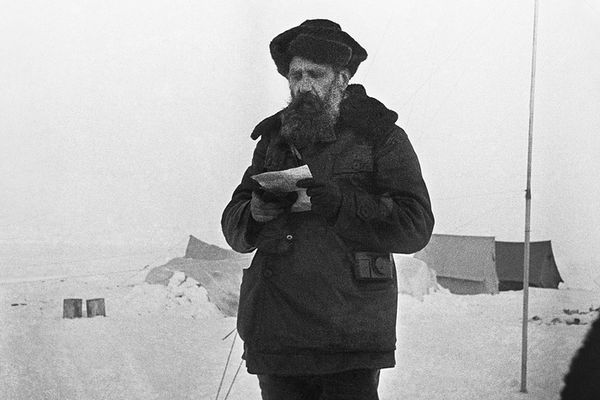 Academian and Hero of the Soviet Union Otto Schmidt, somewhere in the icepack, more about him below

The icebreaker managed to become the first ship in history to complete the 2,500-mile Northern Sea Route in one season when it was traveled by Otto Yulievich Schmidt’s expedition in 1932. The expedition left Arkhangelsk on July 28 commanded by CPT. Vladimir Voronin who, along with Schmidt and his deputy, Prof. Vladimir Wiese, rounded the North Land archipelago from the north and reached the Chukchi Sea in August. From there they had to power through solid ice, repair the hull in several places, free the prop (breaking her shaft) and finally sail the final leg out into the Bearing Strait at about the speed of flotsam on homemade sails made from tarps, old blankets and sheets after total engineering casualties, reaching Yokohama from there with the assistance of a tow from a Soviet fishing trawler in the Northern Pacific on 1 October.

When WWII came to Russia in 1941, courtesy of Barbarossa, Sibiryakov was taken up from academic and commercial service and placed in the Red Navy for the duration of the Great Patriotic War or her destruction, whichever came first.

Speaking of which, her still armed only with some machine guns and her 1915-vintage Tarnovsky-Lender 76mm popgun, she bumped into the Deutschland-class heavy cruiser (Panzerschiffe= armored ship, but commonly just termed “pocket battleship”) Admiral Scheer one day while out among the ice. 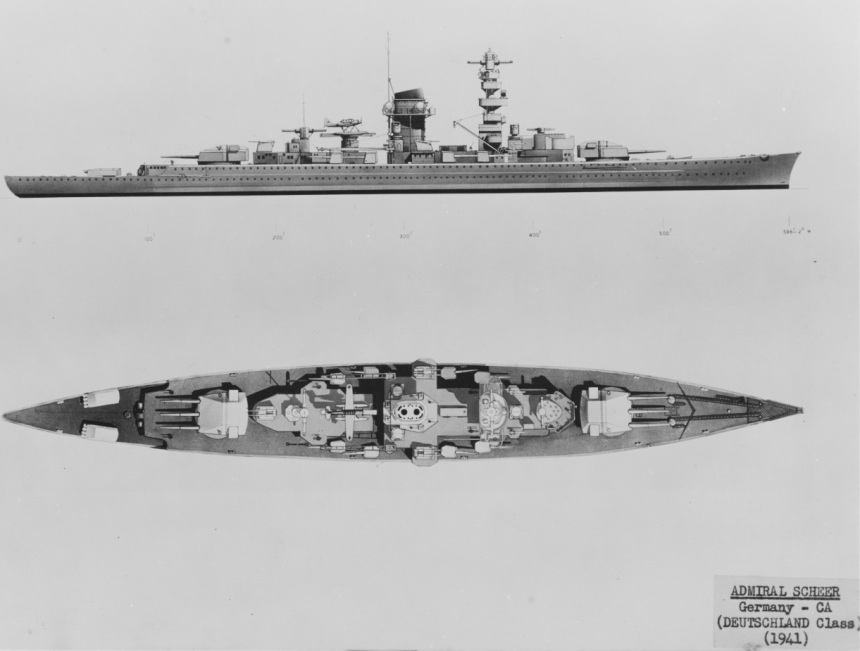 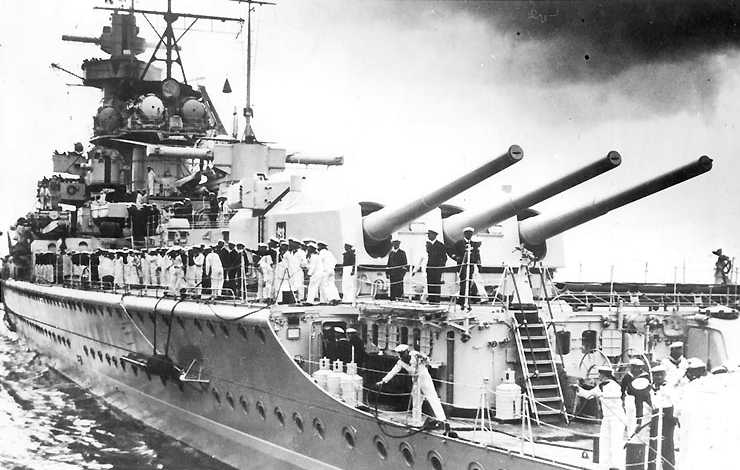 Sailing as part of Operation Wunderland with three destroyers and a number of U-boats, Scheer aimed to penetrate the Kara Sea where they knew Soviets shipping tended to congregate as it was somewhat of a Russian lake, akin to the Gulf of Mexico and the U.S.– only a lot colder.

Encountering Scheer off Belukha Island near Middendorff Bay, the 13-knot icebreaker could not run and, rather than strike their flag, engaged the cruiser on 24 August. It was a short fight as Scheer‘s belt was 3.1-inches of armor while Sibiryakov‘s was – zero – in addition to the gross imbalance in armaments. It was all over within an hour. 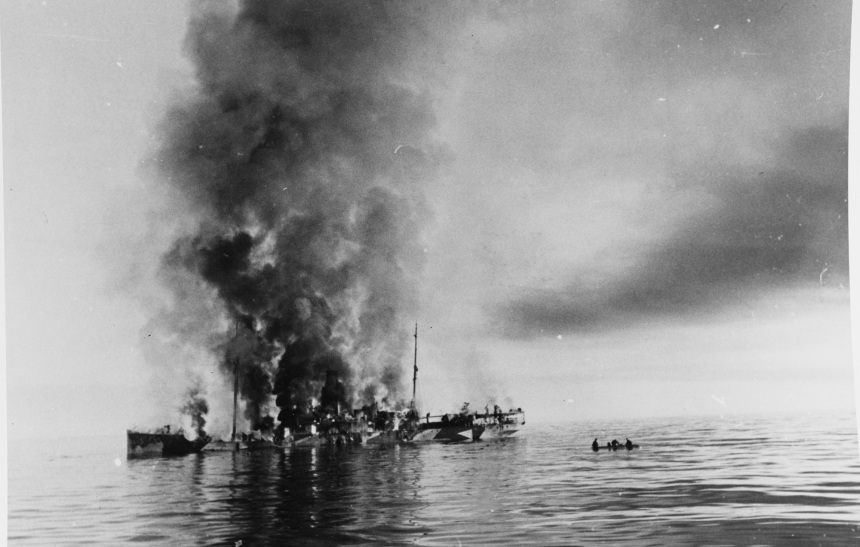 Russian Icebreaker ALEXANDER SIBIRIEKOV Afire and sinking in the Barents Sea North of Murmansk after being attacked by the German cruiser ADMIRAL SCHEER in August 1942 survivors on the raft at right. NH 71384

Of the icebreaker’s 100~ man crew, only her skipper, 32-year-old Senior Lt. Anatoly Alekseevich Kacharava, and 18 crew members were pulled from the water by the Scheer while one man, a stoker by the name of Vavilov, was able to make it to shore on a leaky liferaft where he survived for a month among the polar bears on Belukha Island before he was finally rescued by a passing seaplane. 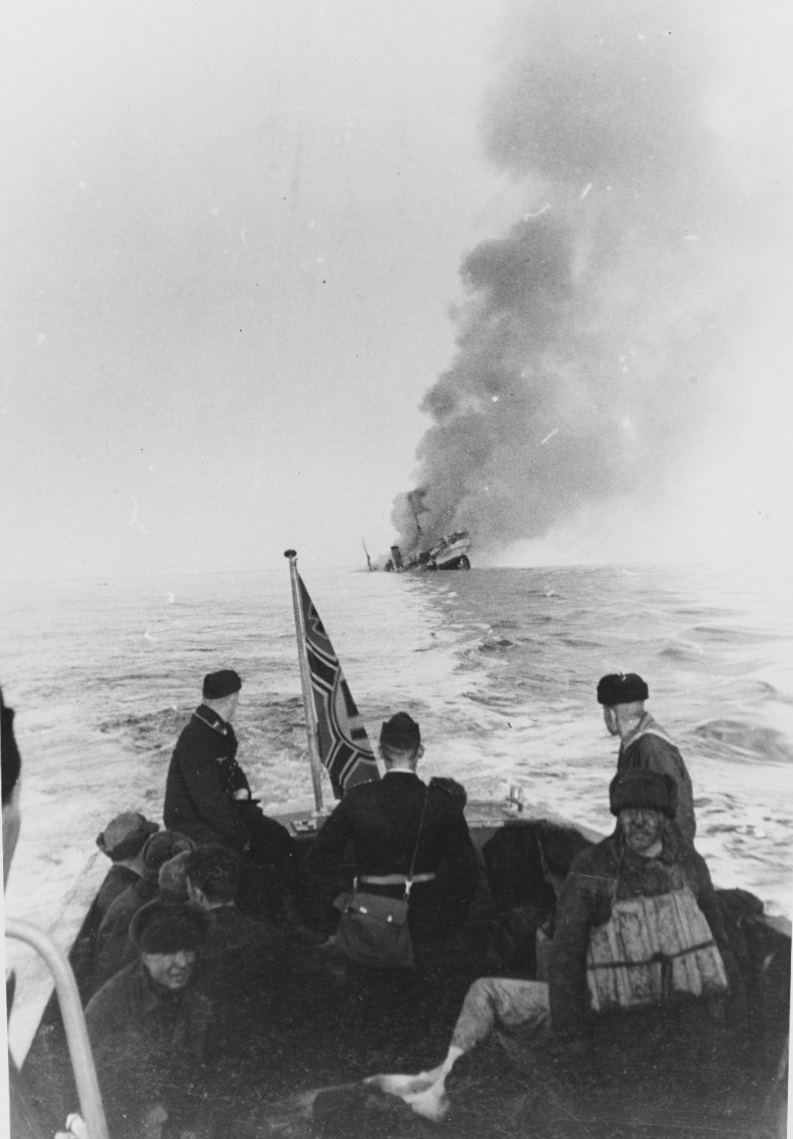 NH 71385 Sinking Of The Russian Icebreaker ALEXANDER SIBIRIEKOV as seen from Scheer, note rescued Soviet sailors on deck. The men would spend the next decade in German and Soviet camps.

Many of the Soviet mariners captured never made it home from German POW camps.

Worse, those who survived long enough to be repatriated after the war were sent to the gulag (thanks, Uncle Joe!) for several years as were many returning Soviet POWs. In 1961, Kacharava, along with the other survivor, was declared “rehabilitated” and awarded the Order of the Red Banner nearly two decades after their pitched battle. He returned to the merchant service, skippering ships along the Northern Sea Route, and headed the Georgian Shipping Company in the 1970s, retiring to Batumi. 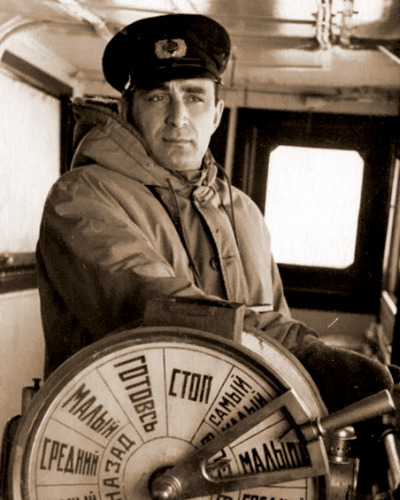 However, the act of trying to fight it out with a beast of a cruiser landed the humble Sibiryakov a solid spot in Russian naval lore, and relics of the ship are venerated today in the country while she has been repeatedly portrayed in Soviet maritime art. 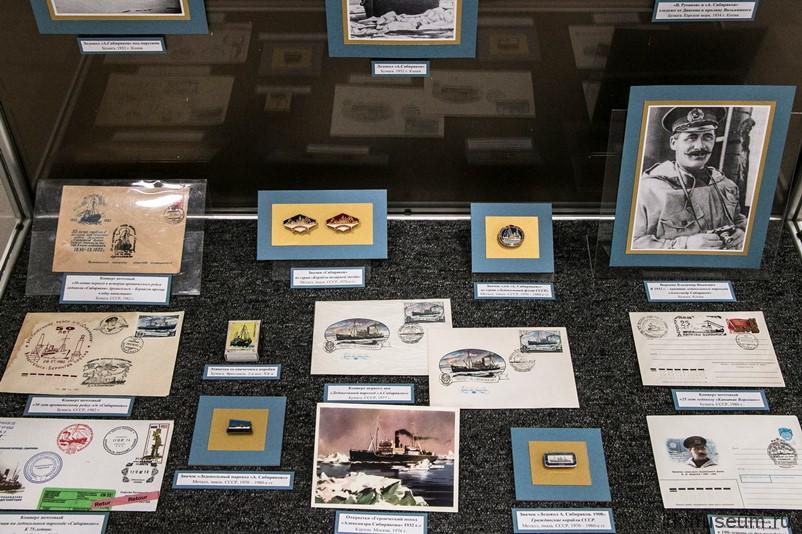 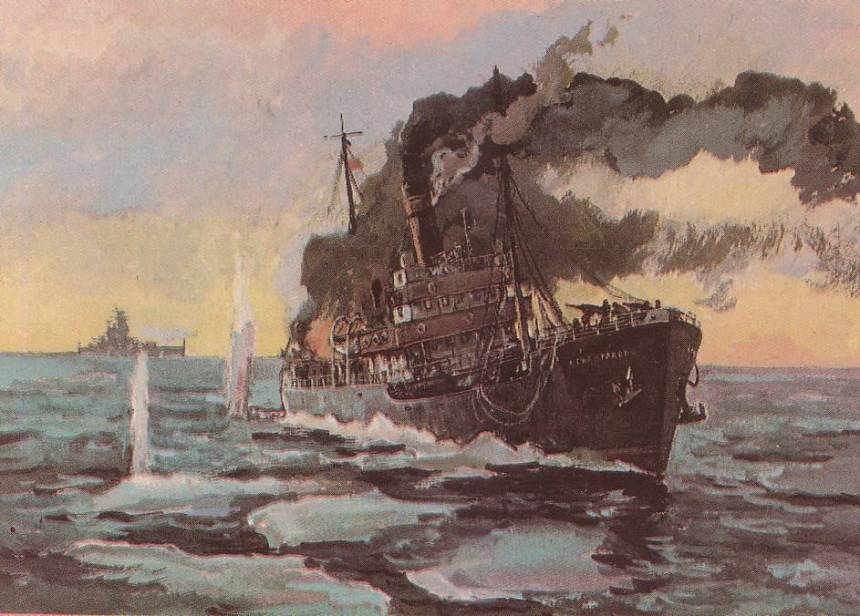 The battle of the icebreaker Alexander Sibiryakov with the cruiser Admiral Scheer by PP Pavlinov, 1945. 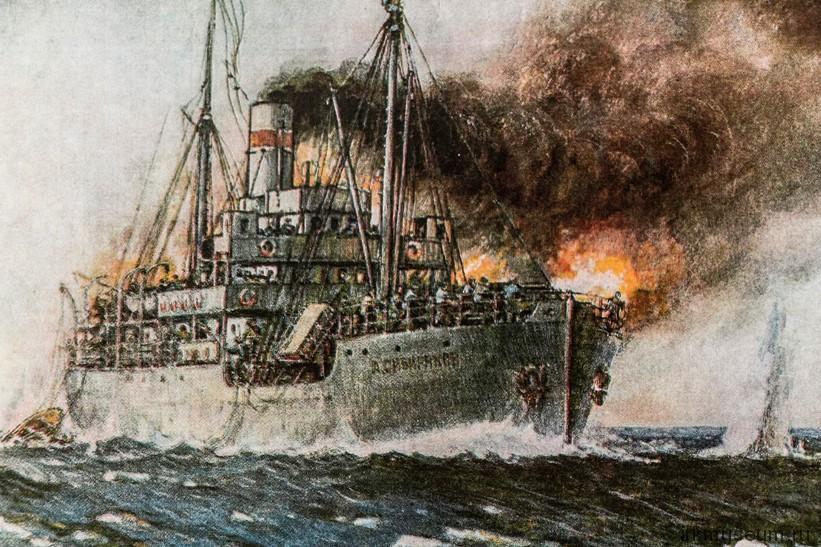 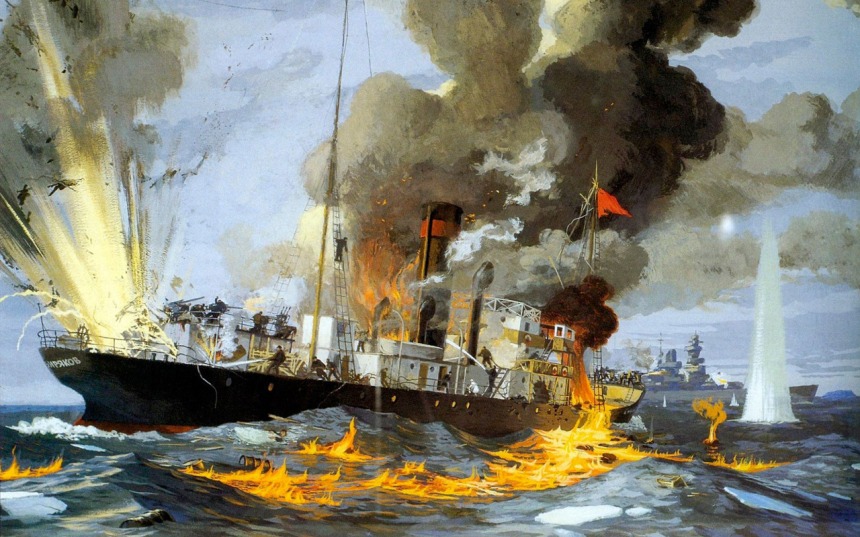 The last fight of the icebreaker Alexander Sibiryakov on 25 August 1942. By Michael Uspensky 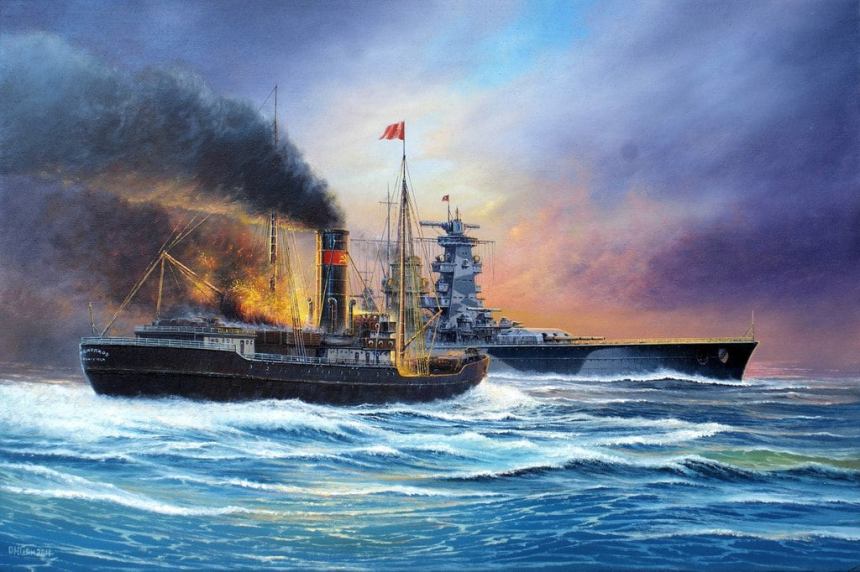 As for Scheer, she was sunk by British bombers in 1945 and partially salvaged, with her remains currently buried beneath a quay in Kiel. 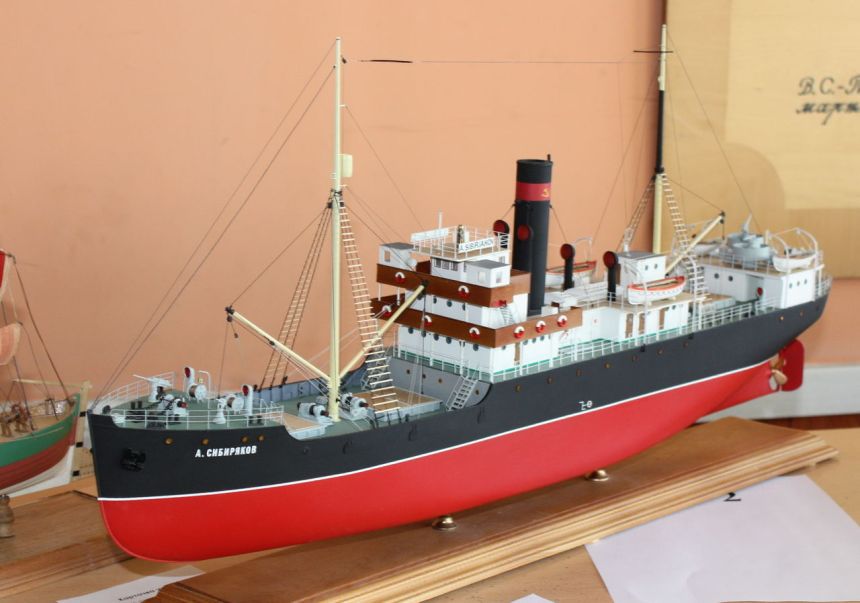