A few years ago the Navy put together a Special Purpose Marine Air-Ground Task Force (SPMAGTF) built around just 250 Marines with a quartet of four CH-53E Super Stallion helicopters. Deployed to Central America in a series of joint exercises and nation-building projects under Southern Command, they spent six months underway.

In recent months, a few additional pages in the same book have been added.

Sailors and Marines assigned to Littoral Combat Group One (LCG-1) just returned to Hawaii after spending six months in the Eastern Pacific– an area that sees few USN deployments. Consisting of just two-three vessels– USS Somerset (LPD 25) and USS Wayne E. Meyer (DDG 108), along with the occasional support of the oiler USNS Yukon (T-AO 202) — they embarked the 300~ Marine SPMAGTF-Peru augmented by Coast Guard LEDETs, the latter to perform stops on narco subs prone to the region. They conducted ops and exercises with partners in Chile, Ecuador, and Peru. 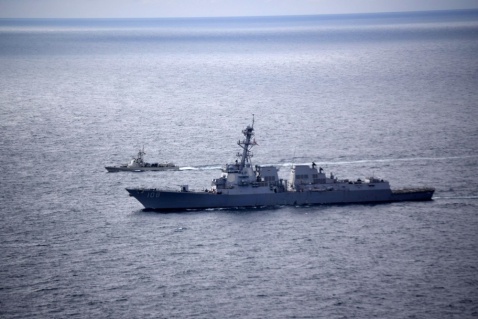 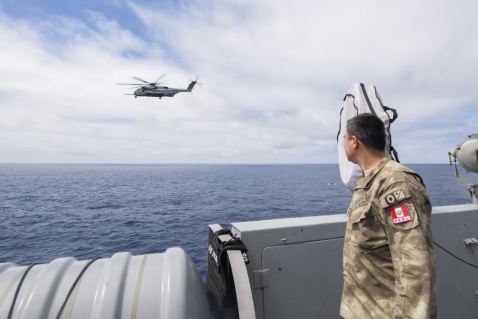 A member of the Peruvian marines watches as a CH-53E Super Stallion assigned to the “Heavy Haulers” of Marine Heavy Helicopter Squadron (HMH) 462 flies by the San Antonio-class amphibious transport dock ship USS Somerset (LPD 25) Nov. 19, 2018, in the Pacific Ocean. USS Somerset is part of Littoral Combat Group One, which is deployed in support of the Enduring Promise Initiative to reaffirm U.S. Southern Command’s longstanding commitment to the nations of the Western Hemisphere. (U.S. Navy Photo by Mass Communication Specialist 2nd Class Kyle Carlstrom)

Moving past the LSG and SPMAGTF’s, there was the single-vessel Task Force Koa Moana 2018.

Using a company-sized force of Marines embarked aboard USNS GySgt Fred W. Stockham (T-AK-3017), an MSC-manned Shughart-class container & roll-on roll-off support vessel, the 55,000-ton prepositioned supply ship sailed around the Pacific, stopping at a string of islands from Tahiti to Palau, Tinian and Guam, performing joint operations with local governments and French military assets (Tahiti is still a Paris-controlled colony, after all.)

As described by the USNI, “TF Koa Moana included 130 members from the West Coast-based I Marine Expeditionary Force, officials said, plus fly-in detachments of Marines and Navy personnel from Okinawa, Japan, and Guam.”

Sure, they aren’t units capable of forcing a beach against a top-tier enemy, but, besides disaster response, LE support, training, and humanitarian missions, groups such as these–if needed– could probably pull off TRAP recoveries, non-combatant evacuations, and FAST-team style legation reinforcements, which in the end, can help take up the slack from overworked Amphibious Ready Groups and Carrier Task Forces.

Just keep them out of harm’s way in contested areas as this could be a way to get a handful of guys in a lot of trouble, fast.