An unsung class of warship during WWII was the 59-vessel Bangor/Blyth/Ardrossan-class oceangoing minesweepers. 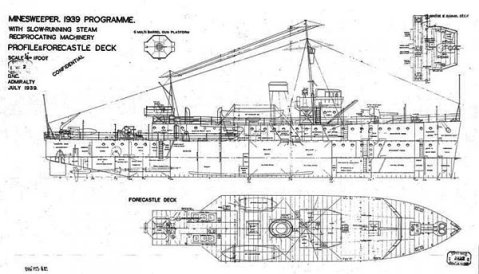 Despite their designation, these 600-ton/162-foot vessels carried a decent main gun (3-inch in RN service, 4-inch in the RCN) as well as ASW kit to include depth charges and listening gear to bust subs, making them something of a multi-purpose coastal escort that could also sweep mines.

They spent much of their time in harm’s way, with nearly a quarter of the class never seeing the end of the war.

Several were lost in their primary tasking, including HMS Clacton (J151), HMS Cromer (J128), HMS Felixstowe (J126) and HMS Cromarty (J09) all struck mines during clearing efforts in the Med in 1942-43, pointing out just how dangerous the mission was. Off Normandy, class member HMS Peterhead (J59) was similarly lost just two days after D-Day while HMCS Mulgrave (J313), who struck a mine off Le Havre, was so badly damaged she was never repaired.

Post-War, they continued to serve in RN and Commonwealth service, as well as in the Turkish and French fleets well into the 1970s, in all, giving excellent service for such a humble maritime figure.

Which brings us to the subject today.

HMCS Esquimalt (J272) was a Bangor-class minesweeper that was sunk by U-190, a German U-Boat on 16 April 1945, making her the last Canadian warship lost to enemy action during the Second World War (or since, for that matter). 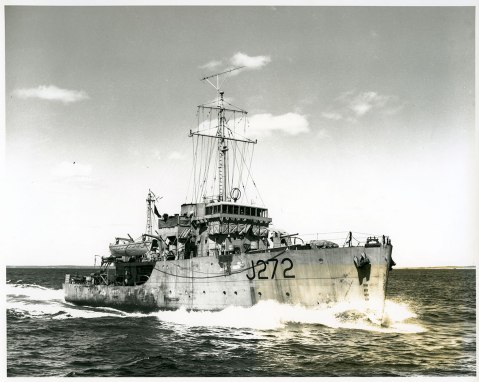 Tragically, she was lost just three weeks before VE-Day, proof that the Battle of the Atlantic remained very hot right until the end of the conflict– and then some.

Every year on the anniversary of her sinking, the 35-member Naden Band of the Royal Canadian Navy, accompanied by a Guard of Honour from Canadian Forces Base Esquimalt pay tribute to the crew of the lost minesweeper and the 39 souls still at sea with a moment of silence and wreath-laying in Esquimalt Memorial Park, where a cairn to the ship and crew has long been established.

This year’s ceremony will be held at 5:45 pm and is open to the public.

As for what became of U-190, that’s another story.