The 240-foot Modoc-class of cutters was conceived for blue water use by the new Post-Great War multi-mission Coast Guard in the 1920s. Capable of carrying three 5-inch guns, a pretty stout armament for such vessels, they had a turbo-electric drive that could push them to 16 knots, which was thought to be good enough for government work. The four sisters, Modoc, Mojave, Haida and Tampa, went on to give hard service in WWII.

Speaking of which, USCGC Tampa (WPG-48) was built by Union in Oakland for a cost of $775,000 and commissioned in 1921. She would spend the next two decades running 15-day patrols from Boston, serving time in the International Ice Patrol, catching bootleggers and keeping the sea lanes safe for travel. The latter included famously saving 140 souls from the burning Ward Line steamer SS Morro Castle in 1932.

Transferring to Mobile, Alabama in the late 1930s, Tampa came under naval jurisdiction in November 1941, a month before Japan attacked Pearl Harbor, as USS Tampa (WPG-48). This caused a shift back to the North Atlantic for coastwise convoy escort runs in the Greenland area along with sisters Modoc (WPG-46) and Mojave (WPG-47).

In this work, she fought U-boats, rescued survivors, landing parties to guard key facilities, and helped fight the “Weather War” to keep German Met units from setting up vital camps in the Arctic alongside such floating relics as the old cutter Bear.

From ship structure and a 20mm gun, onboard a coast guard cutter on the Greenland patrol during World War II. Note the variety of tools in use, including a baseball bat. The ship appears to be a 240-foot (“TAMPA”) class cutter. NH 96116

Although paid off in 1947, her name was key to USCG history, with the first USCGC Tampa lost during the Great War and the second Tampa being the aforementioned WWII vet. This led to the name being reissued in 1984 to the 270-foot Bear-class medium endurance cutter USCGC Tampa (WMEC-902), which was in line with the rest of the naming convention for the class as all were named after famous Coast Guard vessels.

This week, Alex Obrizok a 96-year-old man and resident from North Carolina, traveled to Portsmouth, Va where the current Tampa is based. A former WWII USS Tampa vet, Obrizok has earlier this summer shown a special relic to a 2003 USCGA grad and member of WMEC-902s crew whose wedding he was attending– USS Tampa‘s ensign. Obrizok wanted the ensign to go home. 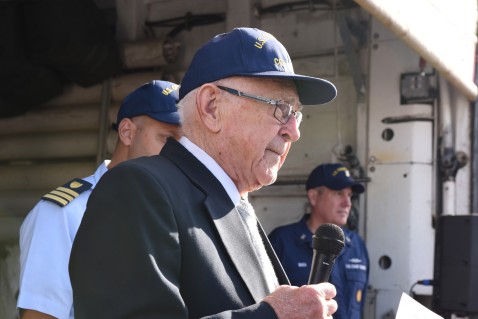 “It’s a beautiful flag,” said Obrizok. “It survived all these years and belongs with her namesake, it belongs to the Tampa.” (USCG photo)

VADM Scott Buschman, Coast Guard Atlantic Area Commander, presided over the ceremony and thanked Obrizok for the historical flag, his service to his country and for making the trip to meet the crewmembers aboard the current Tampa. 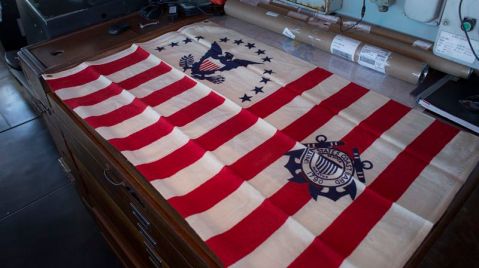 Ninety-six-year-old Alex Obrizok was able to keep this flag from the 1946 decommissioned Tampa over the last 70 years. Obrizok, who lives in North Carolina, returned to the current Tampa on Thursday, Nov. 21 at the Coast Guard base in Portsmouth, Virginia to give the current crew the flag. The World War II veteran also read promotions for four crew members. Photo of the flag that is being kept on the ship, Nov. 25, 2019. (L. Todd Spencer/The Virginian-Pilot)
https://www.pilotonline.com/military/vp-nw-fz-coast-guard-veteran-flag-20191128-eehkvfd5xzajtd2k5hn6ngv224-story.html