Devils and Devils rushed to the Sandbox

Posted on January 3, 2020 by laststandonzombieisland 2 comments

In response to unrest at the U.S. Embassy compound in Baghdad on 27 December following a series of CENTCOM strikes on Kata’ib Hizbollah (KH) bases, a group of 100 Marines from 2/7 attached to Special Purpose Marine Air-Ground Task Force-Crisis Response-Central Command (catchily abbreviated to just “SPMAFTF-CR-CC”) 19.2, rushed from Kuwait to beef up the MSG and State Department DS contingents on New Year’s Eve. They arrived via MV-22 Osprey, as shown in the below USMC videos by Sgt. Robert Gavaldon & Sgt. David Bickel.

Of interest, 2/7 recently filmed this short where they talk about training to do more expeditionary stuff of a ship-to-shore nature.

They were quickly backfilled in the region by a reinforced battalion of the 82nd Airborne (All Americans), which were airmailed over the New Year’s holiday from Fort Bragg to Kuwait. The unit on IRF rotation was the famed 2nd Battalion, 504th PIR. The 504th since 1944 has carried the nickname “The Devils in Baggy Pants,” taken from a comment by a Wehrmacht officer at Anzio. 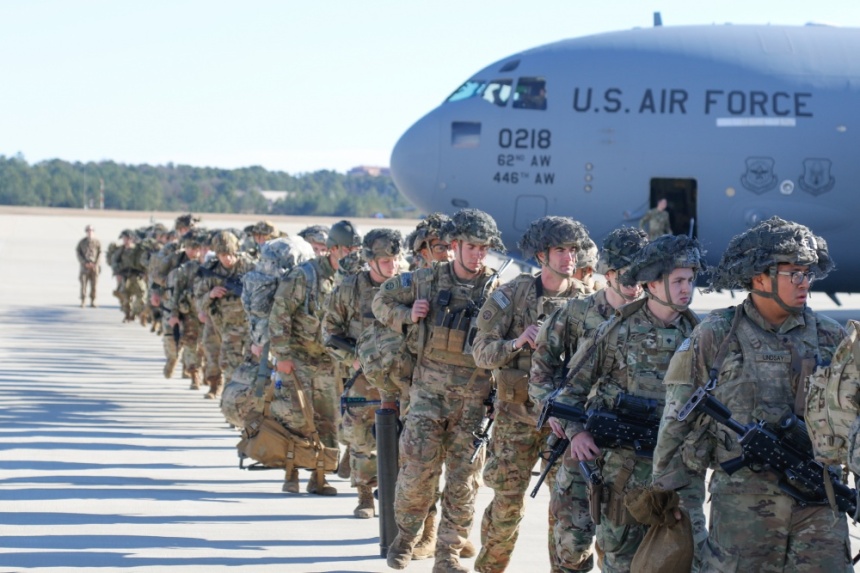 In a statement from SECDEF Dr. Mark T. Esper

At the direction of the Commander in Chief, I have authorized the deployment of an infantry battalion from the Immediate Response Force (IRF) of the 82nd Airborne Division to the U.S. Central Command area of operations in response to recent events in Iraq.

Approximately 750 soldiers will deploy to the region immediately, and additional forces from the IRF are prepared to deploy over the next several days.

This deployment is an appropriate and precautionary action taken in response to increased threat levels against U.S. personnel and facilities, such as we witnessed in Baghdad today. The United States will protect our people and interests anywhere they are found around the world.

Further, the U.S. upped the ante on Friday by dusting Gen. Qassem Suleimani, who had almost cult hero status within IRGC and Quds Force Shia militias in the region, with many referring to him as the real man behind the curtain. The pressure for Tehran to retaliate will be immense.

From DOD this morning:

General Soleimani was actively developing plans to attack American diplomats and service members in Iraq and throughout the region. General Soleimani and his Quds Force were responsible for the deaths of hundreds of American and coalition service members and the wounding of thousands more. He had orchestrated attacks on coalition bases in Iraq over the last several months – including the attack on December 27th – culminating in the death and wounding of additional American and Iraqi personnel. General Soleimani also approved the attacks on the U.S. Embassy in Baghdad that took place this week.

This strike was aimed at deterring future Iranian attack plans. The United States will continue to take all necessary action to protect our people and our interests wherever they are around the world.