Bluebird in Brazil, 98 years ago

A rickety canvas and wood Vought flying machine takes gingerly to the air from a catapult, allowing its 180-horse Wright-Hispano E-3 to claw at the sky. Below is the green-blue water of Rio De Janerio. The date is 11 January 1922. 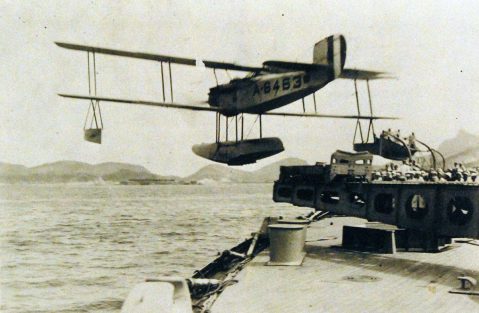 The floatplane, a VE-9H Bluebird (BuNo# A6463), is shown leaving the stern cat of the battleship USS Nevada (BB 36) during the Brazilian Centennial Exposition.

When armed with a single .30-06 machine gun firing through the prop, the two-man VE-7/9 series had a maximum speed of just over 100 mph and was considered to be a fighter at the time.

Only 120 or so were made, split between the Army Air Corps and the Navy. Notably in USN service, the type equipped the Navy’s first two fighter squadrons– VF-1 and VF-2 —, making history in October– ten months after the above photo was taken, when a Bluebird piloted by Lt. Virgil C. Griffin alighted from the deck of the newly commissioned carrier Langley, the Navy’s first carrier takeoff.