Only the Greybeards Left

100 years ago in Ukraine, after four years of the Great War and two of Civil War: 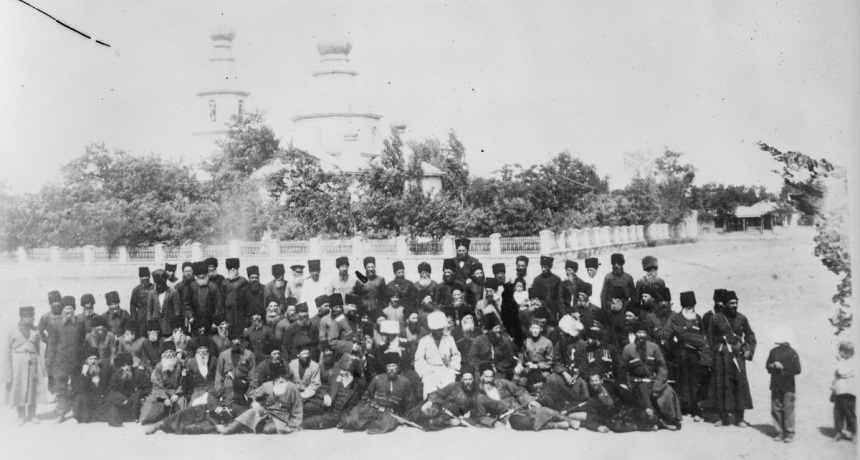 Only the Greybeards Left. When the principal men of the Cossack village of Prochnookopskara, South Russia, were called together to meet the representative of the American Red Cross there were none of the fighting age left. Only the old warriors, whose scars gave a good account of their former days but whose bodies had no longer enough vigor to fight under the fearful campaigning conditions of the struggle against the Bolshevists, met in the market place and doffed their astrakhan hats in honor of the visitor who brought help. The American officer at the left of the center surrounded by hetman in huge white caps is Prince Ourousow

Sadly, once the Reds won the Civil War in South Russia in November 1920, just months after the above photo was snapped, commissars began a state campaign of Raskazachivaniye (decossackization) that was genocide by any other name. Many of the old greybeards shown here soon likely found themselves labeled as “kulaks” or “money bags” (bogatei) for owning a few acres of land and were deported to Siberia in chains or stood up against a wall. The lucky ones just lost their land, horses, and guns and were allowed to join the local collective.

Although the Don and Kuban Cossacks were deemed “counter-revolutionaries” by Moscow and targeted for special treatment, it should be noted that at least one-fifth of all of the men in arms from the stanistas (about 30,000) did so under Red banners, with a full division, the First Don, being composed primarily of Cossacks. As such, many of the young men who rode with Budyonny’s Red Cavalry (Konarmiya) returned home to the farm in 1921 to be shown the light of the Workers’ and Peasants’ Paradise.