USS Nevada (BB-36) survived the hell of Pearl Harbor and was famously the only battleship able to get underway that day. Repaired and returned to service, she earned seven battlestars from France to Okinawa and, in the end, was subjected to far more damage post-war.

Nevada arrived at Bikini atoll on 31 May 1946 and was one of 84 targets used in Crossroads. The tests consisted of two detonations, the first Test Able, an airburst, on 1 July, and the second, Test Baker, an underwater explosion, on 25 July. Despite extensive damage and contamination, the ship survived the blasts and returned to Pearl Harbor to be decommissioned on 29 August. She was sunk by the cumulative damage of surface gunfire, aerial bombs and torpedoes, and rocket fire off Hawaii on 31 July 1948. Nevada was stricken from the Navy Register on 12 August 1948.

Now, over 71 years since she took her plunge to the ocean floor over 15,000 feet down, she has been discovered and documented.

“SEARCH, Inc. and Ocean Infinity are pleased to announce the discovery of USS Nevada, one of the U.S. Navy‘s longest-serving battleships. The wreck was located 3 miles deep in the Pacific during a joint expedition that combined SEARCH, Inc.‘s maritime archaeologists and Ocean Infinity‘s robotic technology and deep-water search capability. The veteran battleship, which survived Pearl Harbor, German artillery, a kamikaze attack, and two atomic blasts, is a reminder of American perseverance and resilience.” 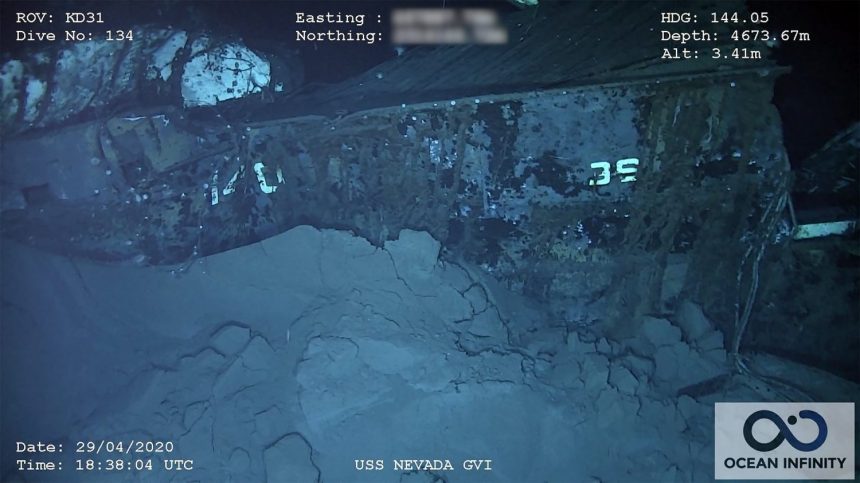 The stern of the wreck has the remains of “36” and “140.” Nevada’s designation was BB-36 and the 140 was painted on the structural “rib” at the ship’s stern for the atomic tests to facilitate post-blast damage reporting. Photo courtesy of Ocean Infinity / SEARCH, Inc.

By the end of World War II, Nevada carried thirty-two 40mm Bofors antiaircraft guns. The airplane had changed naval warfare and guns like this helped the crew fight off enemy attacks from the air. This 40mm gun, still in its gun “tub,” is mounted next to a partly fallen, standard-issue Mark 51 “gun director” used by the crew to direct the fire of these guns. Photo courtesy of Ocean Infinity / SEARCH, Inc.

USS Nevada, like other ships at Bikini, was a floating platform for military equipment and instruments designed to see what the atomic bomb would do to them. One of four tanks placed on Nevada, this is either a Chaffee or Pershing tank that survived a 23-kiloton surface blast and a 20-kiloton underwater blast and remained on Nevada until the ship was sunk off Hawai’i on July 31, 1948. Photo courtesy of Ocean Infinity / SEARCH, Inc.