Original caption: “A six-pounder gun crew in action against the enemy in the Lingevres area [Normandy]. Our troops are pushing forward in this sector against strong enemy resistance. 7th Green Howards/50th Infantry Division, 16 June 1944.” 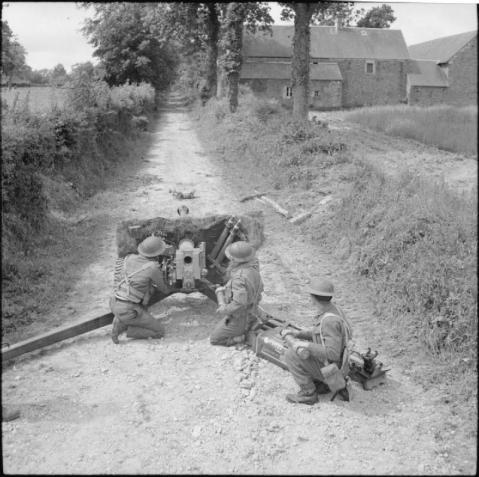 Photograph B 5642 from the collections of the Imperial War Museums. Taken by Sgt. Midgley.

The British Ordnance QF 6-pounder 7 cwt, adopted by the U.S. Army as the 57mm M1 anti-tank gun, could penetrate up to 7-inches of armor at 100 yards with APDS rounds, a figure that would drop to 2-inches at 2,200 yards. As you can tell, it was always better to get the drop on upcoming armor, to cut that range as short as possible.

Of course, the thickness on the hull nose and glacis, mantlet, and turret front was of a Tiger II was 7.28-inches, so there is that.

One response to “Bonjour!”