The U.S. Navy’s early Plunger-class (SS-2) submarines were small. What we would consider midget submarines today. 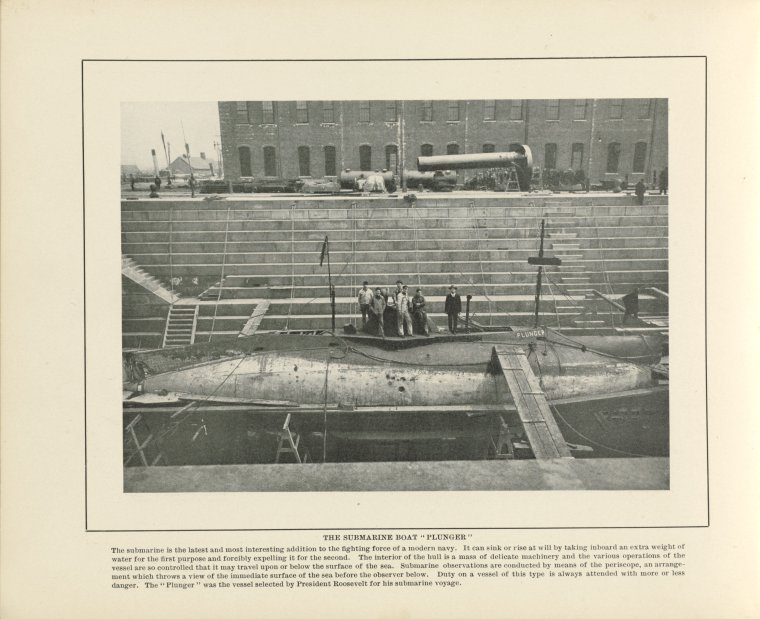 When Teddy Roosevelt took a trip on Plunger when she called at Oyster Bay (which we will cover in a future Warship Wednesday), he decreed that submariners would get hazard pay– a legacy that remains today.

Just 64-feet long they did not even have on-board accommodation for their six-man crew, requiring the Navy to develop the practice of having submarine tenders primarily to provide barracks space for the boat’s crew, a task that old monitors, with their freeboard low to the surface, proved a life-extension for.

When the Navy wanted to ship submarines to the Philipines after 1898, it was the Plunger-class that was tapped for the job, strapped as deck cargo to the collier USS Caesar for the trip.

So small, apparently some were simply chucked over the side when they arrived in the PI.

This 1909 LA Herald article says “English” submarine, but I can only find that, in 1908 and 1909, Ceasar moved Plunger class boats to the Far East, while the Brits did not.

Too small for a deck gun, their armament was only a single 18-inch torpedo tube in the bow. 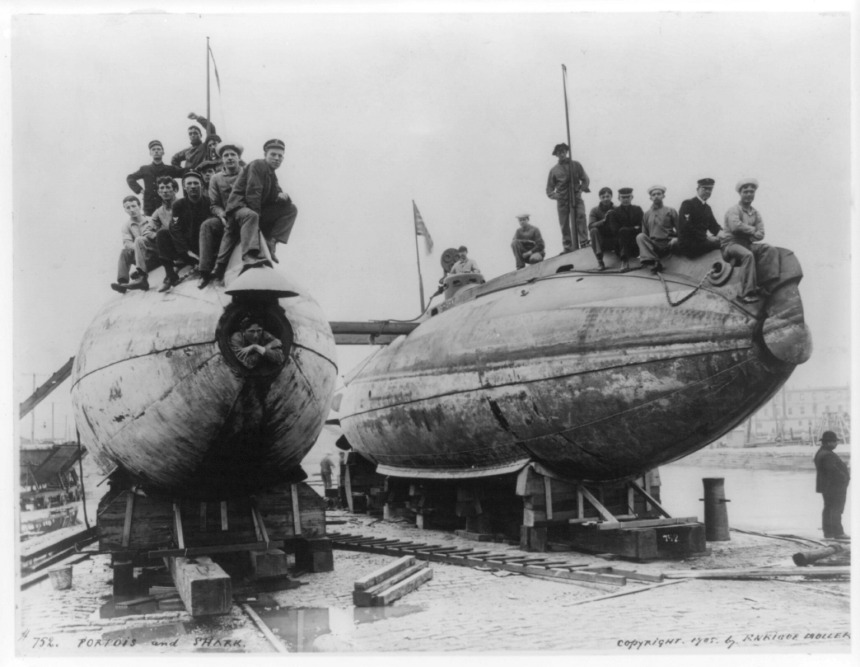 Plunger sisters USS Porpoise and Shark. Two submarines in drydock with crews posed on bows, 1905. Note the bluejacket in the single bow tube

Relinquishing control of PORPOISE to his crew, Whiting opened the inner door of the tube and squeezed himself inside; he reached forward and held onto the crossbar that braced the outer door. The crew closed the inner door behind him and then opened the outer, sending water rushing into the tube. His hold on the crossbar drew Whiting forward until his forearms up to his elbows were outside the tube. Once the pressure equalized, which happened quickly given the small size of the tube, he was able to shimmy the rest of the way out and pop to the surface, where the boat met him moments later.

In the log, he described the event thusly: “Whiting went through the torpedo tube, boat lying in [the] water in [a] normal condition, as an experiment….”

He passed the word of the escape along to his flotilla commander, but sought no further recognition for the accomplishment—he was apparently happy simply to prove that it could be done.

While Porpoise and the rest of her class would soon disappear from the Navy List, the daring young Whiting would go on to become a  distinguished Naval Aviator commanding Langley and Saratoga, and various air squadrons prior to his retirement as Captain 30 June 1940.