Here we see an incredible original color photo of the Colossus-class light aircraft carrier HMCS Warrior, Canada’s first flattop, at sunset circa 1946. She would fly three different flags across her short career and get close enough to an H-Bomb to almost touch the sun.

Warrior was one of 16 planned 1942 Design Light Fleet Carriers for the RN. This series, broken up into Colossus and Majestic-class sub-variants, were nifty 19,500-ton, 695-foot-long carriers that the U.S. Navy would have classified at the time as a CVL or light carrier. They were slower than the fast fleet carriers at just 25-knots with all four 3-drum Admiralty boilers were lit and glowing red, but they had long legs (over 14,000 miles at cruising speed) which allowed them to cross the Atlantic escorting convoys, travel to the Pacific to retake lost colonies or remain on station in the South Atlantic or the Indian Ocean for weeks.

The classes’ 1946 Jane’s entry under the RN’s section. Note that Warrior is missing.

Capable of carrying up to 44 piston engine aircraft of the time, these carriers had enough punch to make it count.

The thing is, only seven of these carriers were completed before the end of World War II and even those came in during the last months and weeks. They effectively saw no service. Laid down beginning in 1942, most of the ships were launched but when the war ended, construction was canceled. Two were completed as a peculiar RN invention of a “maintenance carrier,” intended just to repair and ferry but not operate aircraft. Some were immediately transferred to expanding Commonwealth fleets. Suddenly, the Australians, Canadians, and Indians became carrier operators. The Dutch (then Argentines) and Brazilians soon followed. Class leader Colossus was sold to France as Arromanches.

Speaking of being sold off, Warrior was ordered, originally as HMS Brave, on 7 August 1942 from Harland and Wolff (builders of the Titanic) at their yard in Belfast. Launched on 20 May 1944, just two weeks before D-Day, she was the last of the Colossus class to finish construction in WWII on 2 April 1945, just as Berlin was falling. Intended for use in the Pacific, she was made available to Ottawa on a “try it before you buy it basis” while Japan was still in the war.

The Canadians were not entirely neophytes to carrier operations, having used a couple of Ruler/Bouge-class escort or “Jeep” carriers (the RN-flagged HMS Nabob and HMS Puncher) during the war already. Outfitting four squadrons (803, 825, 826, and 883 for the RCN), she would soon be ready to fly Supermarine Seafires (later replaced by Hawker Sea Fury) fighters, and Fairey Firefly IV strike aircraft (later replaced by TBM Avengers). Commissioned as HMCS Warrior on 24 January 1946, she was the largest warship Canada operated up until that time, having previously just had cruisers and escorts.

She arrived at Halifax in March 1946 and, had Japan not surrendered six months prior, would have likely gotten in on Operation Coronet, the planned and likely very bloody Allied invasion of Honshu, where the British Pacific Fleet was scheduled to play a big part. After all, her sisters HMS Colossus, Glory, Venerable, and Vengeance had already joined the BPF in Sydney in 1945.

Instead, Warrior never went to war under a Canadian flag. 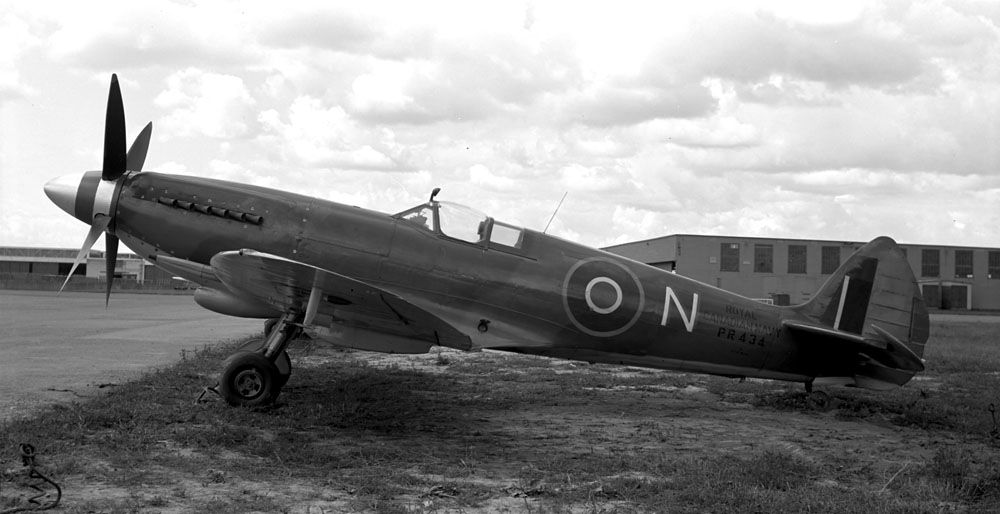 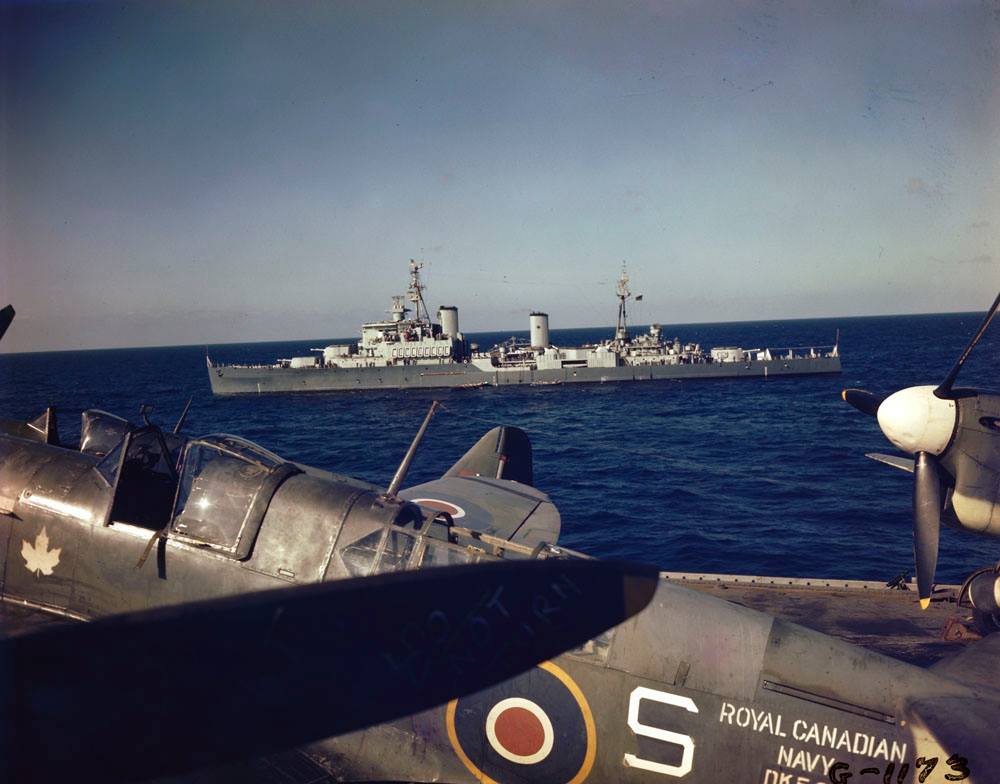 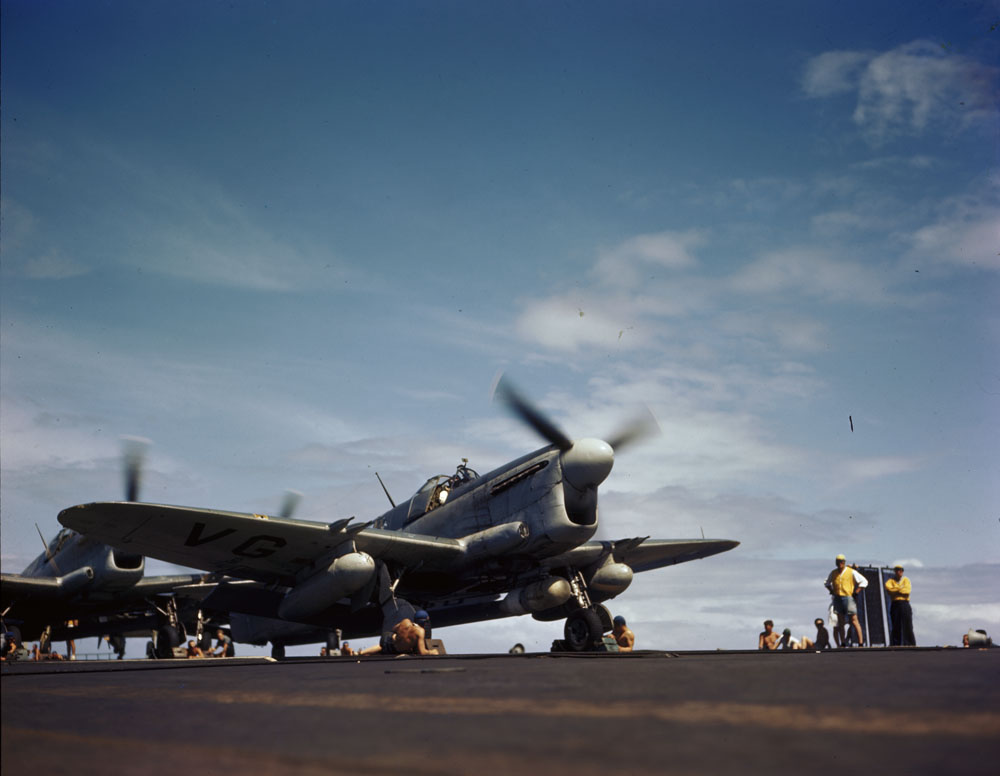 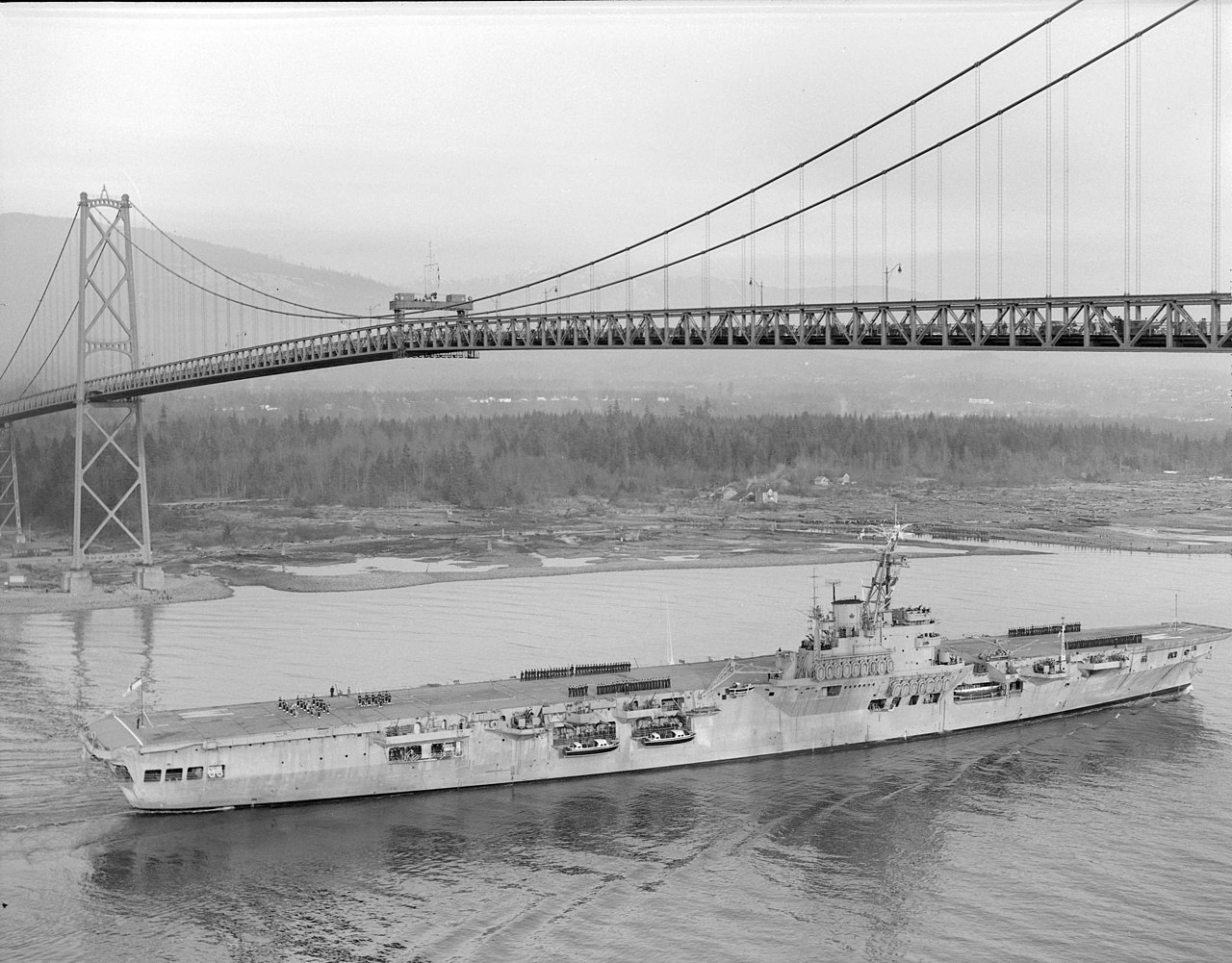 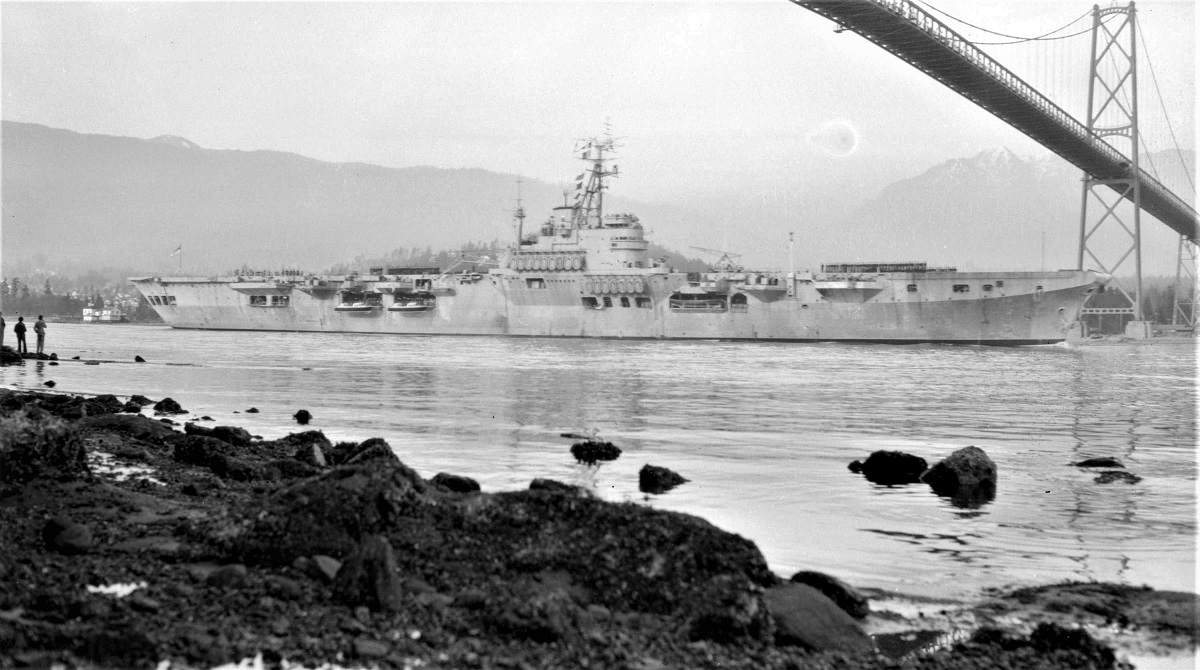 Canada’s first proper flattop was returned to the Royal Navy on 23 March 1948 at Portsmouth, replaced by the Majestic-class near-sister HMCS Magnificent.

Upon her return to Britain, Warrior was used as a trial ship for flexible deck experiments and then was laid up. Reactivated for Korea, she was used as a transport carrier to haul troops and aircraft to the epic battle for the Peninsula, arriving there in August 1950. 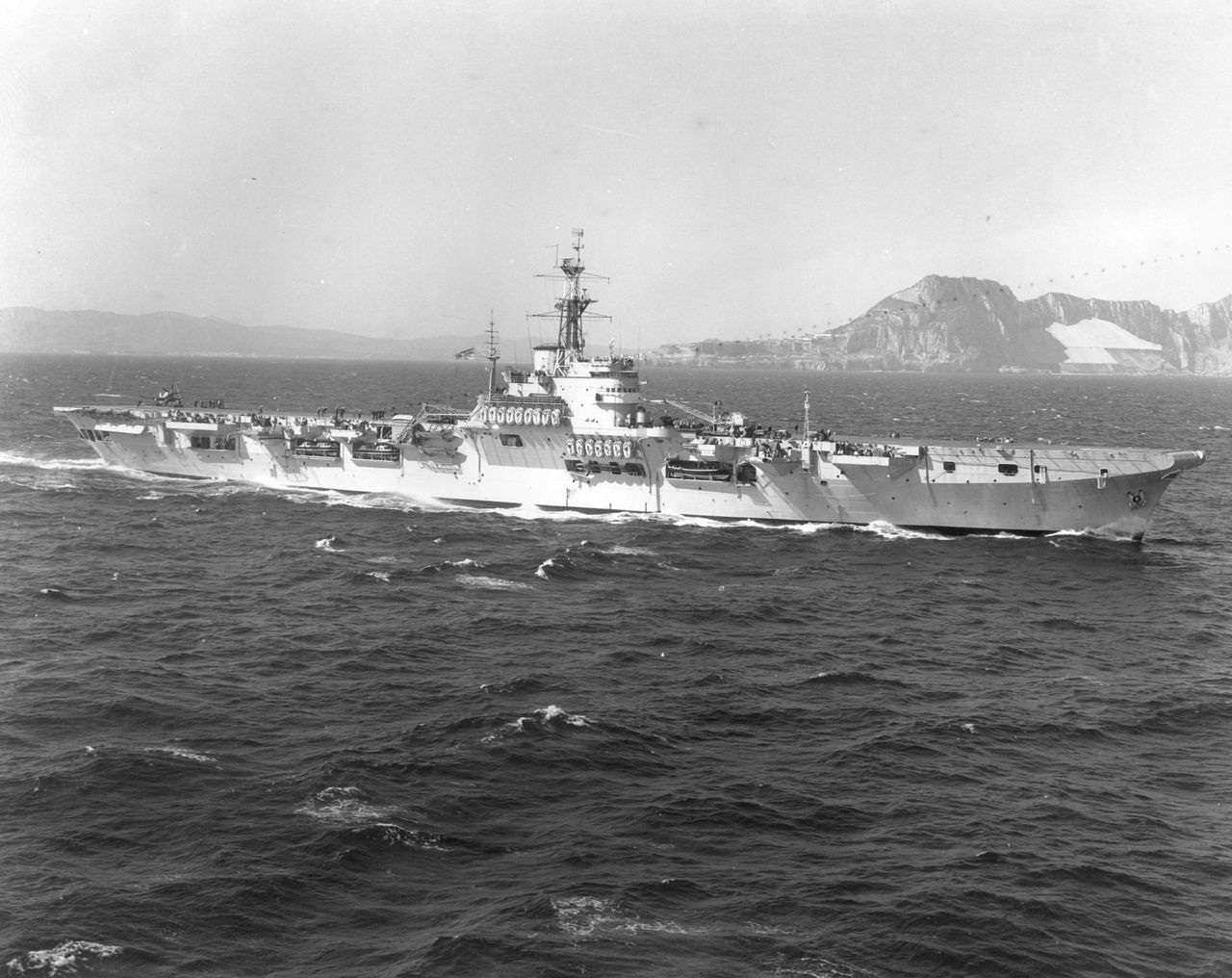 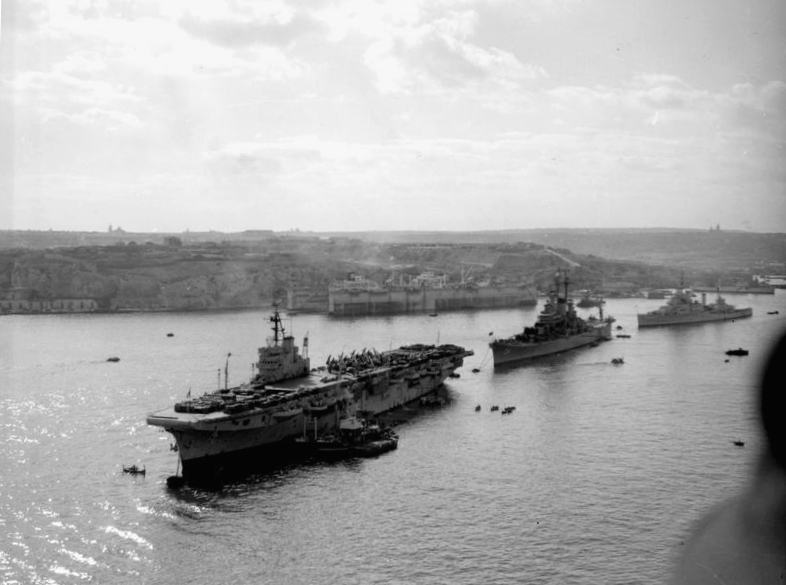 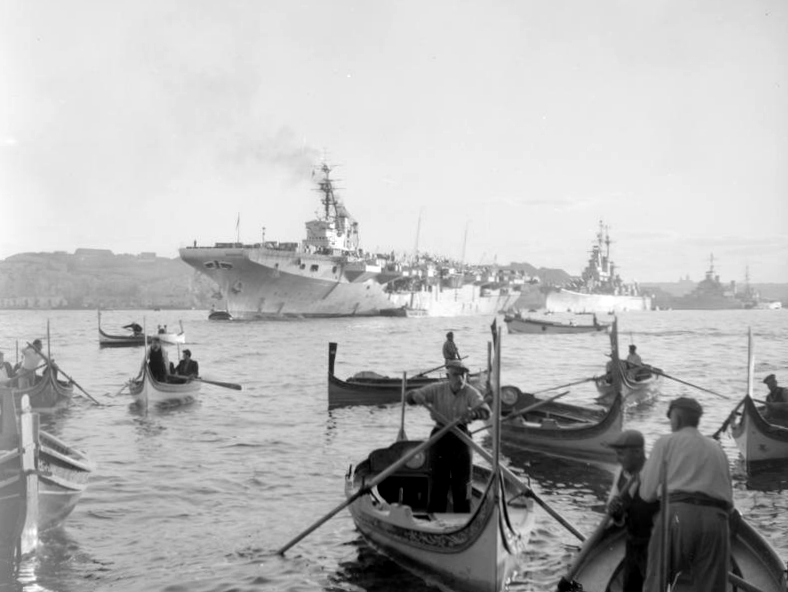 After a refit with new commo gear and radars, she would embark Sea Furies and Fireflies for a West Pac cruise in 1954, where she would have the White Duster in both South Africa and Hong Kong.

FAR EAST FLEET EXERCISES. 3 OCTOBER 1954, AERIAL PHOTOGRAPHS FROM AIRCRAFT OF THE LIGHT FLEET CARRIER HMS WARRIOR OF THE BRITISH FAR EAST FLEET. EXERCISES CARRIED OUT OFF THE CHINA COAST AND WITH THE ROYAL AUSTRALIAN NAVY. (A 33037) HMS BIRMINGHAM and HMS WARRIOR in line ahead while exercising off Hong Kong. Copyright: © IWM. Original Source: http://www.iwm.org.uk/collections/item/object/205016333

FAR EAST FLEET EXERCISES. 3 OCTOBER 1954, AERIAL PHOTOGRAPHS FROM AIRCRAFT OF THE LIGHT FLEET CARRIER HMS WARRIOR OF THE BRITISH FAR EAST FLEET. EXERCISES CARRIED OUT OFF THE CHINA COAST AND WITH THE ROYAL AUSTRALIAN NAVY. (A 33035) HMS WARRIOR sailing from Hong Kong for the exercises. Copyright: © IWM. Original Source: http://www.iwm.org.uk/collections/item/object/205016331

During this cruise, she served as a “floating nursery,” clocking in to carry refugees from newly independent North Vietnam down to the Republic of Vietnam.

THE FRENCH INDOCHINA WAR, VIETNAM 1945 – 1954 (A 33001) The aircraft carrier HMS WARRIOR evacuates 1,455 refugees from Haiphong, North Vietnam to Saigon during Operation PASSAGE TO FREEDOM, 4 September 1954. Rice and other food are issued to refugees in the forward lift well. Copyright: © IWM. Original Source: http://www.iwm.org.uk/collections/item/object/205187799

As above. Note the spare wings on her hangar deck bulkheads. IWM A 33003 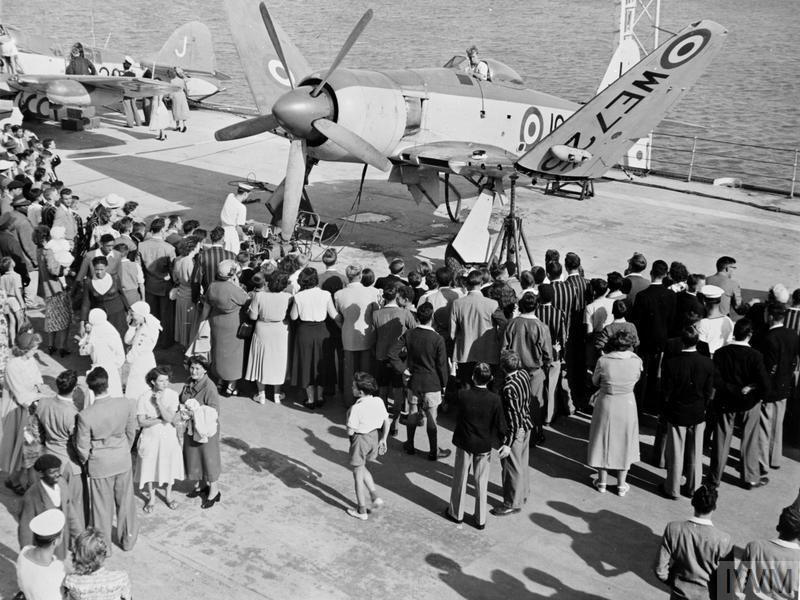 HMS WARRIOR VISITS SOUTH AFRICA. ON 11 NOVEMBER 1954, ONBOARD THE LIGHT FLEET CARRIER AT PORT ELIZABETH, SOUTH AFRICA. (A 33059) A section of the large crowd of South Africans who visited HMS WARRIOR at Port Elizabeth. More than 10,000 visitors went aboard on one afternoon. Here some are looking at A Sea Fury on the WARRIOR’s deck. Copyright: © IWM. Original Source: http://www.iwm.org.uk/collections/item/object/205163735

Given another refit to add an angled deck– the Brits were the first to use such a novelty, she would embark both helicopters and fixed-wing aircraft on occasion. This included another trip to the Pacific where she would standby of the Grapple X test at Christmas Island– the first British hydrogen bomb.

Grapple test as seen from HMS Warrior via Histarmar. The carrier would be very close to three separate bombs during the tests.

There, her Avengers, Vampires, and HAR3/4 Whirlwinds would collect fallout samples the old-fashioned way, by flying through it. 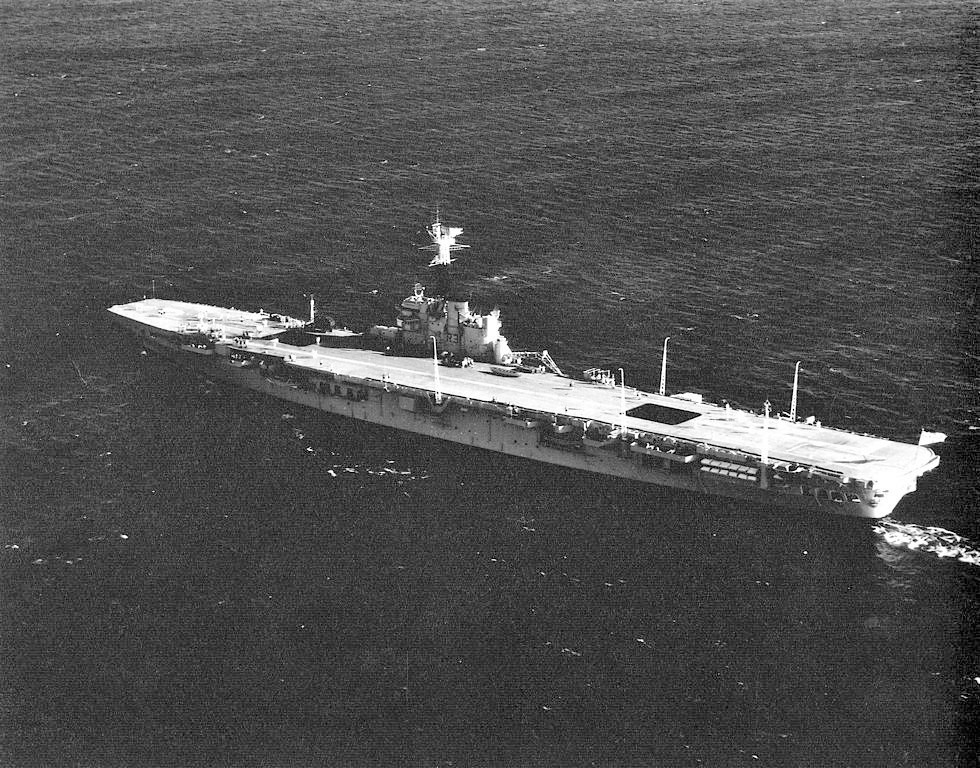 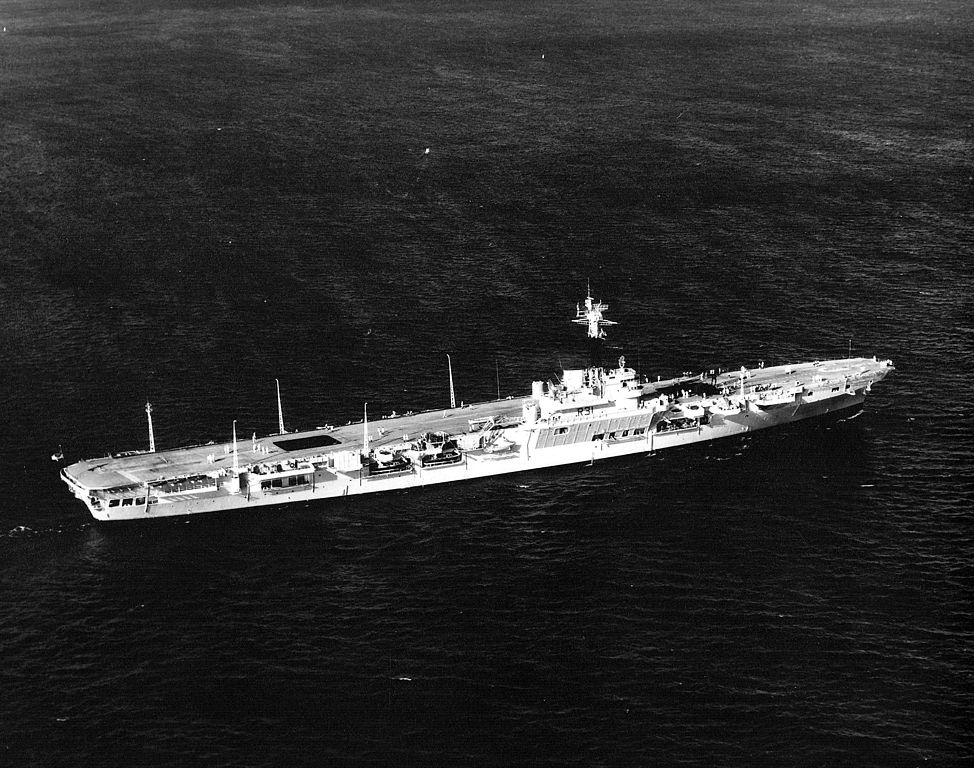 On her way back from the Grapple tests, Warrior stopped off in Argentina, then a British ally, for a very special set of tours. You see, the carrier was surplus to RN needs and was very much for sale.

Back to the Americas

Sold to Argentina, HMS/HMCS Warrior was renamed ARA Independencia (V-1) on 6 August 1958 while at Portsmouth undergoing refit. Leaving for her new homeland, she arrived in December and wasn’t officially commissioned until mid-1959 with the first Argentine carrier landing in history taking place on her deck in June.

Her initial airwing would be made up of Korean War-era F4U-5L Corsairs complete with wing-mounted radars, a few navalized SNJ-5Cs Texans, the occasional T-28A Trojan, and, after 1962, a handful of early S-2A Trackers. 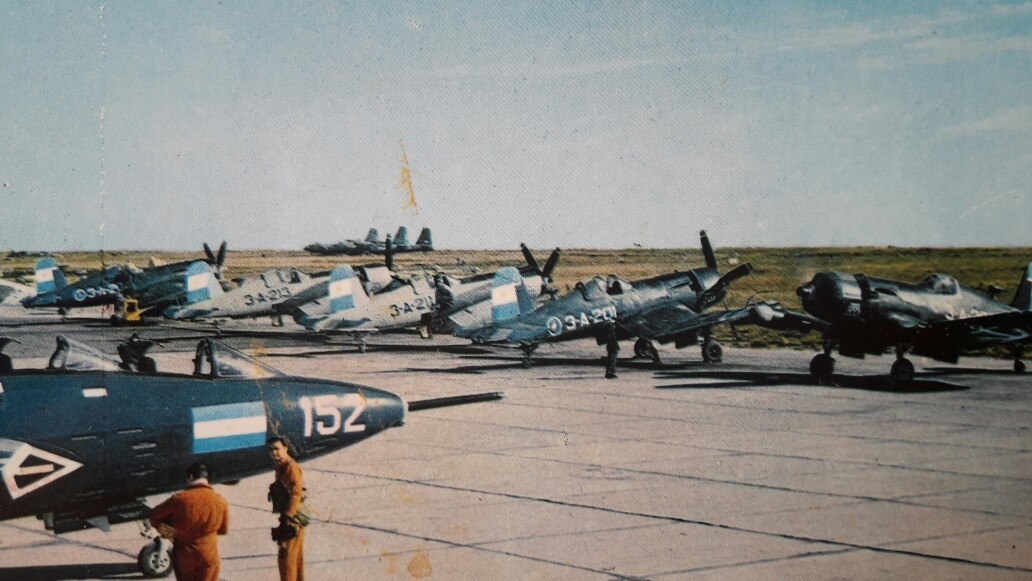 F4U-5NL Vought Corsairs of the Aviacion Naval Argentina, circa 1962, original color. The country operated 26 F4U-5/N/5NL Corsairs from 1956 to 1968, primarily flying from Independencia 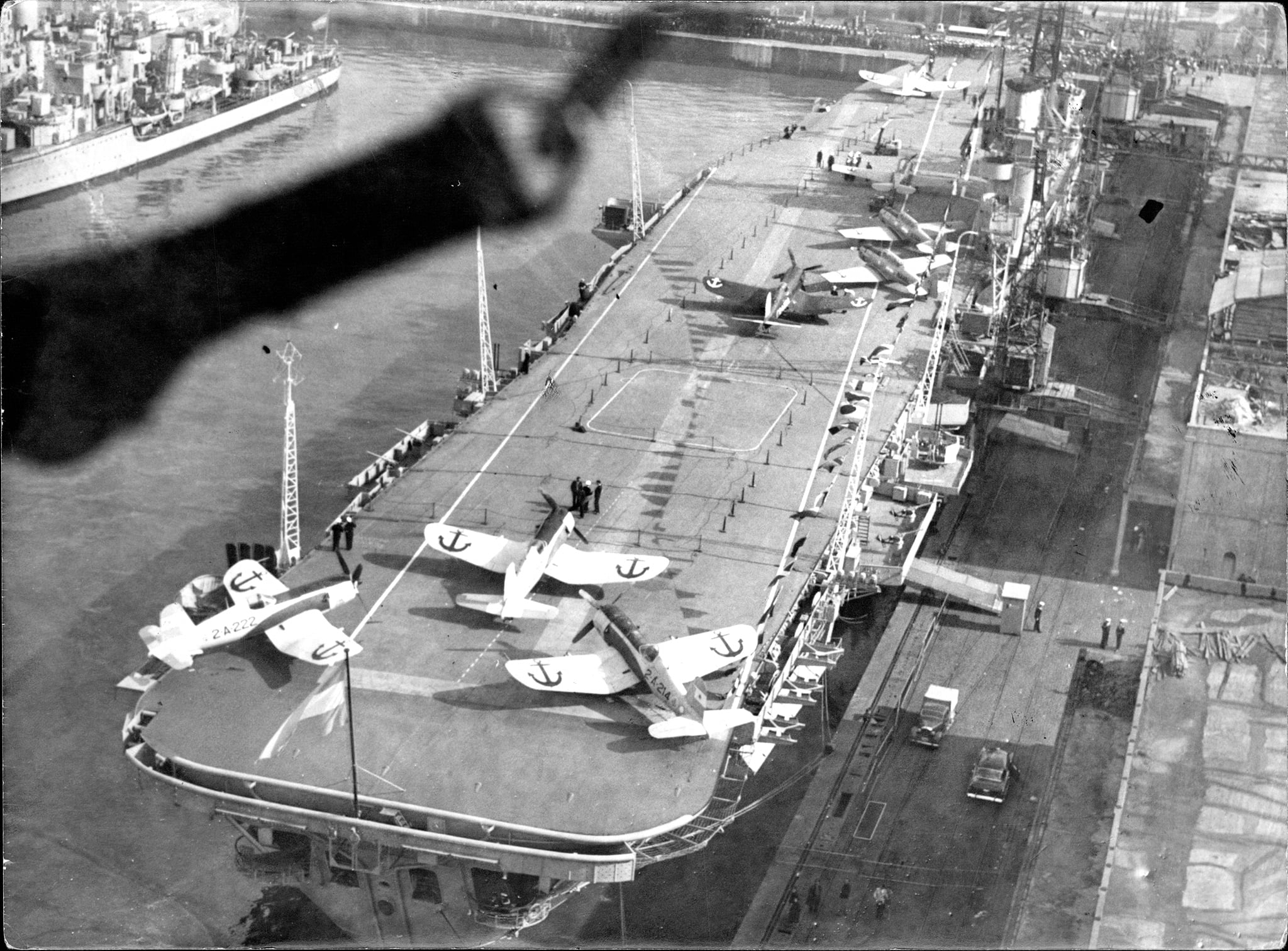 In August 1963, an ex-U.S. Navy F9F-2B Panther flown by Capt. Justiniano Martínez Achával became the first jet to land on an Argentine carrier when it was trapped on Independencia. However, it had to be craned off as her catapults were not thought to be powerful enough to launch it safely.

At least one of the country’s two F9F-8T Cougar trainers was photographed aboard as well. 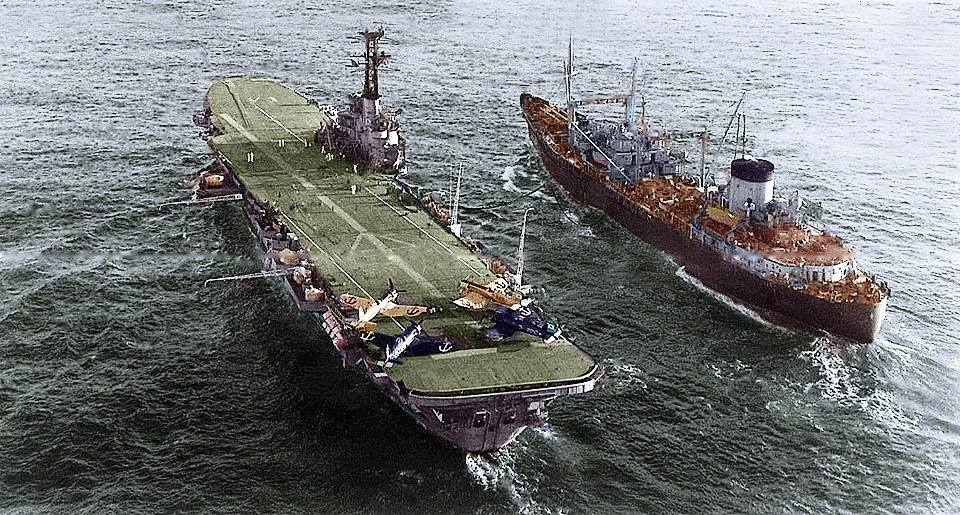 With the delivery of the more modern Colossus-class sister HNLMS Karel Doorman (ex-HMS Venerable) from Holland in 1968– which could launch Panthers and Cougars and would later carry A-4 Skyhawks– the Argentines commissioned the new flattop as ARA 25 de Mayo (V-2) on 12 March 1969 and Independencia’s days were numbered. Laid up, she was sold on 17 March 1971 and scrapped.

Today, little of Warrior remains, with her bell still washed up in Canada at the Shearwater Aviation Museum in Nova Scotia.

There are, also, assorted scale models of her aircraft, including those flown by the FAA, RCN, and Armada. 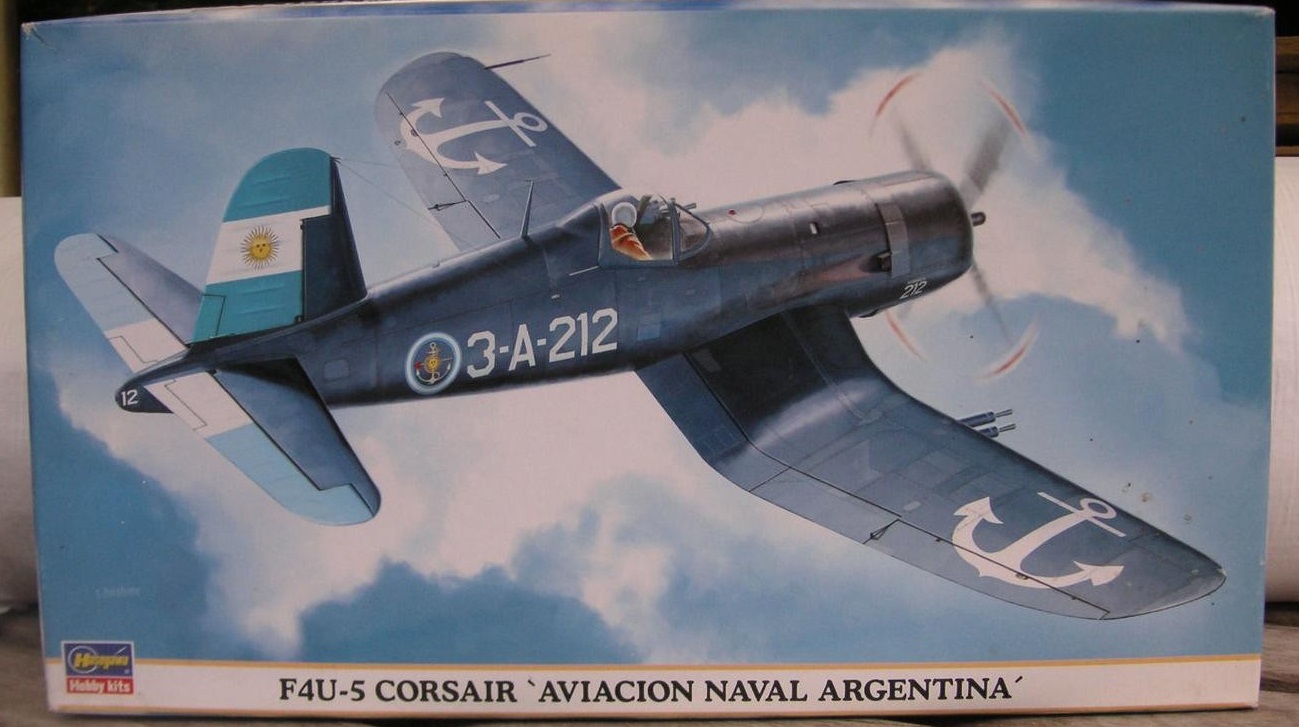 The last of her class in the Royal Navy, Triumph, was kept around as a repair ship until 1975 then scrapped. The final vessel of her class sent to the breakers, the third-hand ex-HMS/HMAS Vengeance/ex-NAeL Minas Gerais, was sold for scrap by the Brazilian owners in 2004, torched to man-portable pieces on the beach at Alang.

There is one, more somber legacy of Warrior as well. Members of her Grapple crew, many of which have long-term generational health issues, are often represented by the British Nuclear Test Veterans Association. 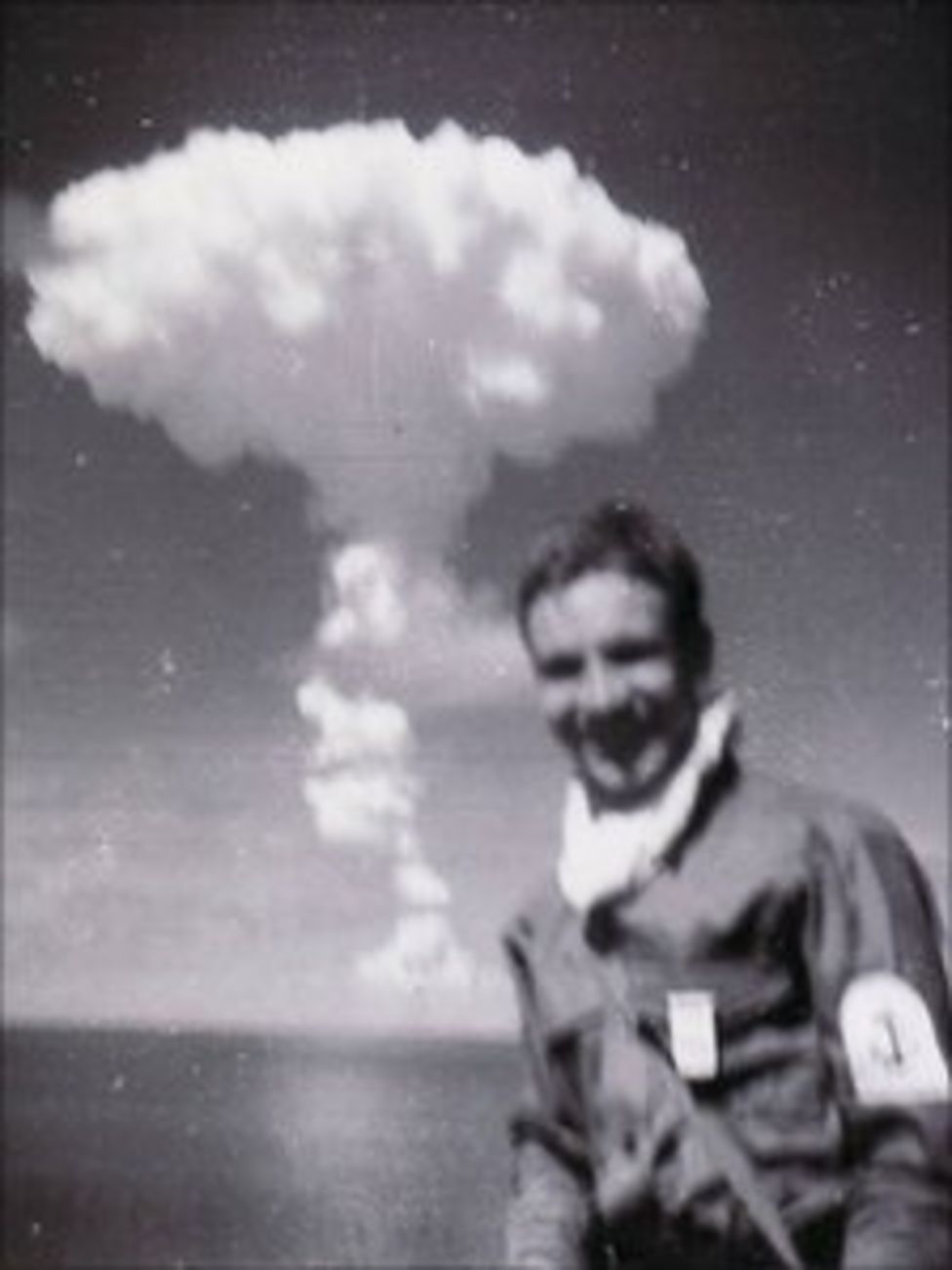 George Baulch on the deck of HMS Warrior after the first explosion. “One of his daughters was born with severe learning disabilities, which Mr. Baulch blames on the radiation. She died in her 30s of unexplained reasons.” 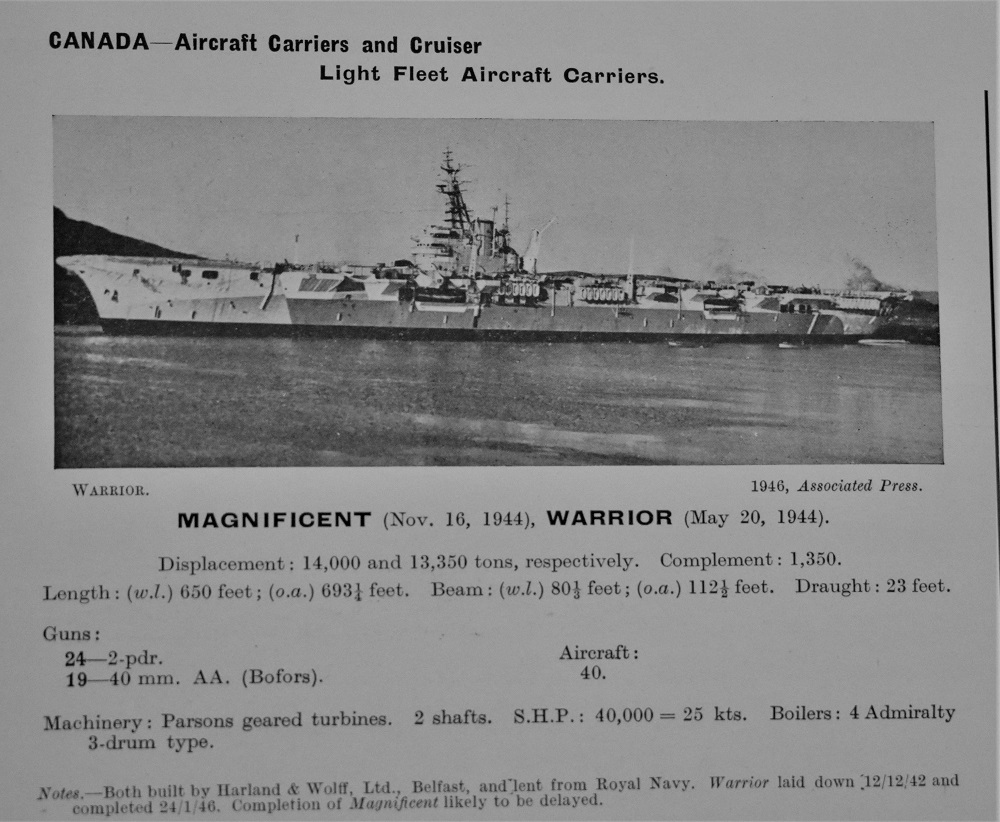