The National Matches Not Remembered

The U.S. Army today is, by most accounts not written in Chinese or Russian, the most modern and advanced in the world. However, that was not always the case.

Back in the 1890s, the 26,000-man force was scattered around the country in 80 small garrisons and was one of the smallest on the globe– Belgium could boast a larger military. Moreover, it had little depth in time of war.

There was no Army Reserve as it would not be formed until 1908.

The National Guard, likewise, was not authorized by Congress until 1903.

Instead, each state had its own local militia system dating back to the colonial era which was very hit and miss– mostly miss– in terms of training and equipment. Even this force had to volunteer for federal service and then be hastily organized on the fly. This led to an embarrassing showing in 1898 when it came time to mobilize 125,000 of these volunteers to augment the far-flung Army and take the field against the Spanish in Cuba and Puerto Rico during the Spanish American War.

Further, the marksmanship of Spanish regulars, armed with top-of-the-line Mauser pattern bolt-action rifles firing smokeless cartridges, was often devastating compared to the American’s more dated Krag rifles and single-shot Springfield Trapdoor models, both fed with black powder ammo. It turned out that less than half of the militia– which made up the bulk of the U.S. military– had received peacetime “target practice of any description.”

No two alike! As exemplified by these members of the 16th Pennsylvania Volunteers kneeling, with their obsolete Springfield Trapdoor rifles raised during the Spanish-American War, peacetime marksmanship training was lacking at the time. Luckily for them, the 16th would see only limited combat and lost more men to disease than gunfire. (Photo: Library of Congress)

In the reckoning that came after the Spanish-American War, a new Mauser-pattern rifle (the Springfield M1903) was adopted, and the Army was greatly expanded. The Army Reserve and National Guard were formed to make standardization and mobilization to back up the regulars much easier, and a decision was made to enhance and promote military rifle marksmanship. That latter task resulted in the National Board of the Promotion of Rifle Practice; a preparedness organization founded under the direction of Spanish-American War vet, President Theodore Roosevelt. The Board in 1903 moved to begin the National Matches, a military marksmanship competition for a national trophy held at Camp Clark in Sea Girt, New Jersey.

These Sea Girt matches, a new novelty, was chronicled by the Bain News Service as they were national news, all of the below via the LOC: 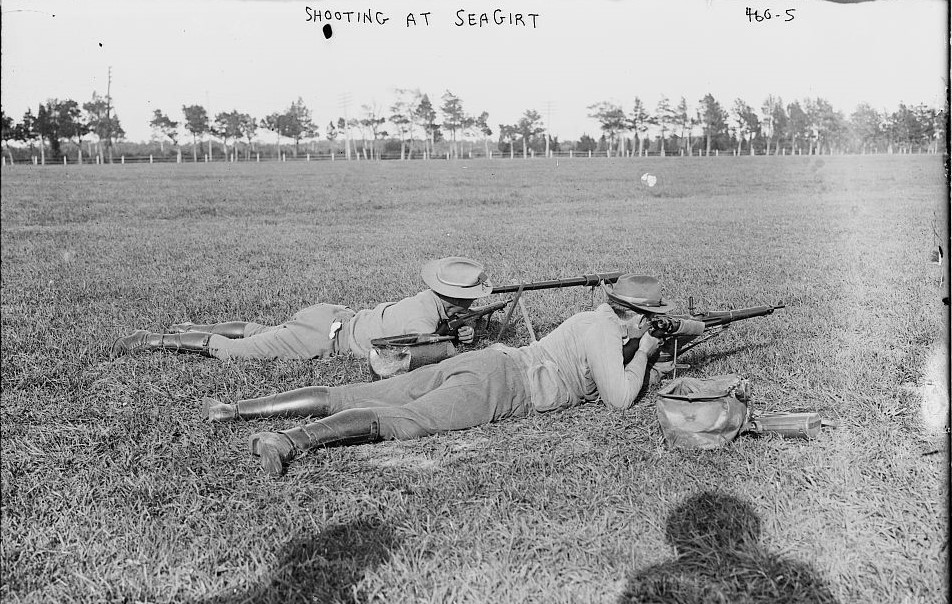 Two years later, the Board was authorized to sell surplus military rifles to rifle clubs around the country so that the pool of trained marksmen could be expanded outside of those wearing uniforms. By 1907, the enlarged National Matches were moved to a larger facility at the more centrally located Camp Perry, Ohio.

Of interest in this photo from Perry in 1907 is the use by the shooter in the foreground of a Pope sight micrometer, attached to the rear sight elevation leaf. Harry Pope’s micrometers, unlike most of the several varieties that were made and sold, were intended to be left in place while the rifle was being fired. Photo via American Rifleman

In 1916, with the country again looking at entering a large war with a better-trained European power, the National Board of the Promotion of Rifle Practice morphed into the newly formed Director of Civilian Marksmanship or DCM.

The final version of the DCM was an Army-run, government-owned and financed operation, with the Pentagon giving it a shoestring $4.3 million annual budget, or about $10 million in today’s dollars.

According to a 1990 GAO report, the group had just 36 employees but still managed to support 165,000 civilian shooters in 1,945 affiliated clubs nationwide. The DCM in 1989 sold just 6,000 surplus M1 Garand Army rifles to affiliated club members, but had another 24,000 assorted rifles loaned to the clubs themselves, and sold or donated some 37 million rounds of ammunition– almost all .22 rimfire– to its associated members and clubs. It also supported 365,000 Boy Scouts via marksmanship programs, largely through the donation of ammo to their summer camps. Besides sponsoring 135 rifle and pistol matches around the country that year, the DCM also hosted 3,650 competitors at Camp Perry for the National Matches.

However, the Army felt the program was “of limited value” at a time when the post-Cold War defense budget was shrinking dramatically and the Clinton administration in 1996 ended the DCM, converting it into the privatized CMP, with much the same mission but under a new format.

And they still hold the National Matches at Camp Perry.