This great shot shows a Pennsylvania-class dreadnought– either USS Pennsylvania (Battleship No. 38) or Arizona (BB-39), to the left and a Tennessee-class battlewagon be it USS California (BB-44) or Tennessee (BB-43) moored in Elliot Bay during the Navy’s summer maneuvers, circa 1935. It is most likely that the ships are in Pennsylvania and California. 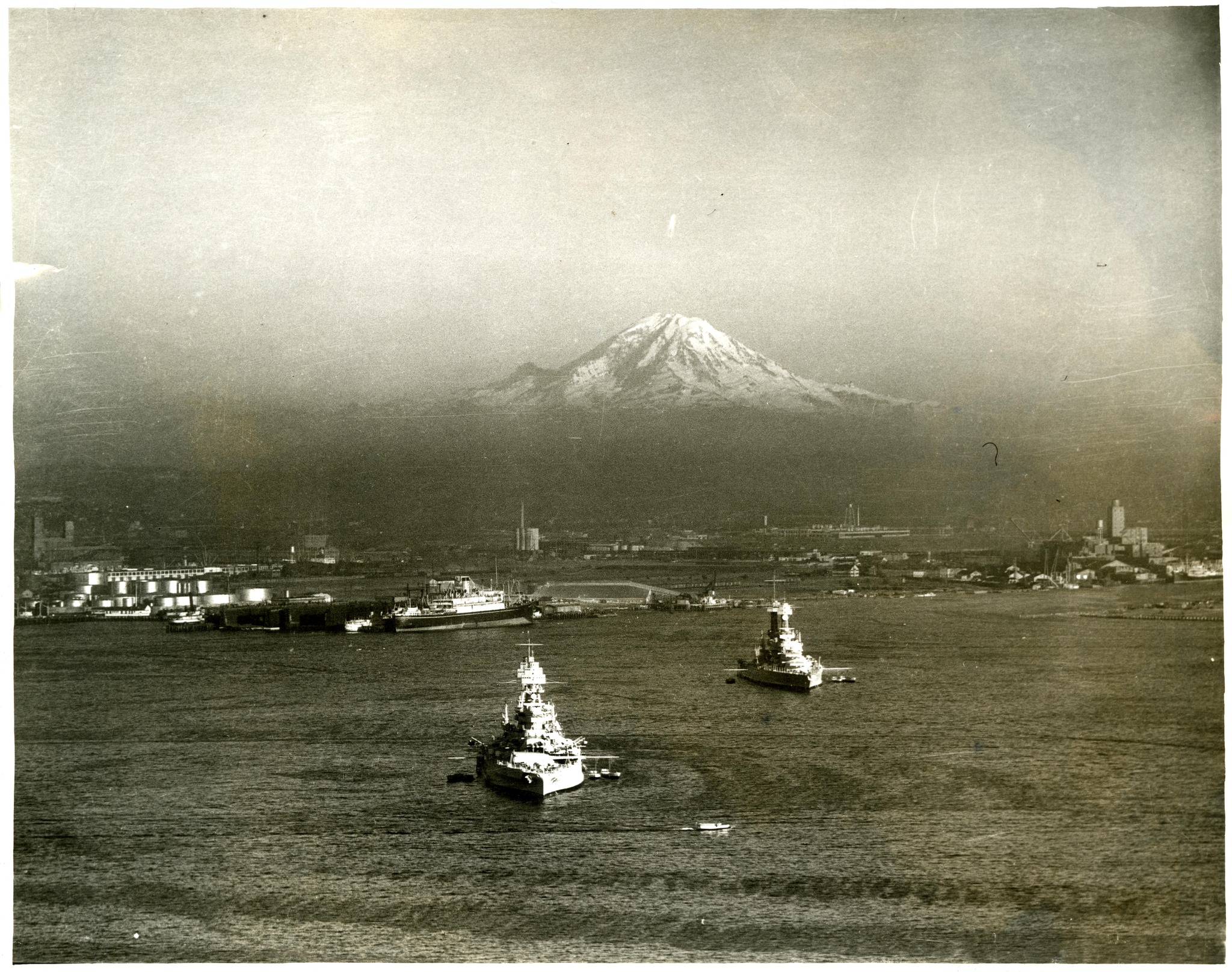 Notes: “These battleships are lying in Seattle’s harbor, in the shadow of Mt. Rainier, Washington State’s highest mountain peak. The United States battle fleet visits the North Pacific annually in the Summer, and ships can be seen in July and August in Washington ports, before and after maneuvers.” — typewritten on a note attached to verso. Washington State Digital Archives. Via Seattle Vintage

The Spring and Summer of 1935 saw Fleet Problem XVI, which lasted from 29 April through 10 June and saw the Navy use four carriers at sea for the first time. Operating across the “Pacific Triangle” between Hawaii, Puget Sound, and the Aleutian Islands, it saw 160 vessels and 450 aircraft taking part, the largest at-sea collection of warships since the British Grand Fleet in 1918.

The five phases of Fleet Problem XVI covered a vast area from the Aleutian Islands to Midway, the Territory of Hawaii, and the Eastern Pacific. Severe weather hampered the operations in Alaskan waters, but the problem demonstrated the value of Pearl Harbor as a base when the entire fleet with the exception of the large carriers was berthed therein. Patrol and marine planes took a major aerial role during landing exercises when combined forces launched a strategic offensive against the enemy.

During her first fleet problem Ranger joined Langley, Lexington, and Saratoga in the Main Body of the White Fleet. The slowness of sending patrols on 30 April enabled ‘Black’ submarine Bonita to close within 500 yards and fire six torpedoes at Ranger as she recovered planes, and for Barracuda to fire four torpedoes from 1,900 yards. Planes pursued the submarines and a dive bomber caught Bonita on the surface and made a pass before she submerged, but the ease with which the boats penetrated the screen boded poorly for the ships. A mass flight of patrol squadrons marred by casualties subsequently occurred from Pearl Harbor via French Frigate Shoals. The evaluators noted that the problem demonstrated the necessity of developing antisubmarine “material and methods”; the importance of training in joint landing operations; the lack of minesweepers capable of accompanying the fleet at higher speeds; and the slow speed of the auxiliaries.

Based in San Pedro, Pennsylvania participated in the exercise as part of the “White” force, as did California.

The problem also delivered a critical lesson when it came to any future high-tempo carrier war at sea: their constant need to be escorted by tankers for underway replenishment:

This shortcoming had first surfaced during Fleet Problem XV of 1935. While participating in this exercise, the USS Lexington (CV 2) became critically low on fuel after just five days of operations. During Fleet Problem XVI as well, conducted the following year, the Saratoga (CV 3) consumed copious amounts of fuel-as much as ten percent of her total capacity in a single day-when operating aircraft. The latter exercise, which involved extensive movements of the fleet from its bases on the West Coast to Midway Island and back, revealed in general that flight operations by carriers accompanying the fleet resulted in extremely high fuel consumption for the ships involved. In order to launch and recover aircraft, a carrier had to steam at relatively high speed and, necessarily, into the wind-thus usually on a course different from that of the main units of the fleet.

After recovering aircraft, she would need to maintain high speed again in order to catch up. Of course, steaming at high speeds used enormous amounts of fuel. At twenty-five knots, a carrier’s normal speed for operating aircraft in light winds or for trying to overtake the fleet, the fuel consumed by the Saratoga exceeded thirty tons per hour! At this rate, her steaming radius was only 4,421 nautical miles, much less than the 10,000 miles (at ten knots) specified by her designers. As a result of these problems, the General Board recommended that the fuel capacity of both the Lexington and the Saratoga be increased. It is likely that in the interim, someone in War Plans decided that the carriers would have to be refueled at sea.