In December of 1956, the crew of the Midway-class “Attack Aircraft Carrier”USS Franklin D. Roosevelt (CVA-42) assembled on the ship’s flight deck to send holiday greetings to the world. As noted by the Virginia Pilot archives of this U.S. Navy image, the ship was on the way back from the eastern Atlantic to Norfolk Naval Shipyard following a tense scratch deployment in response to the Suez Crisis. 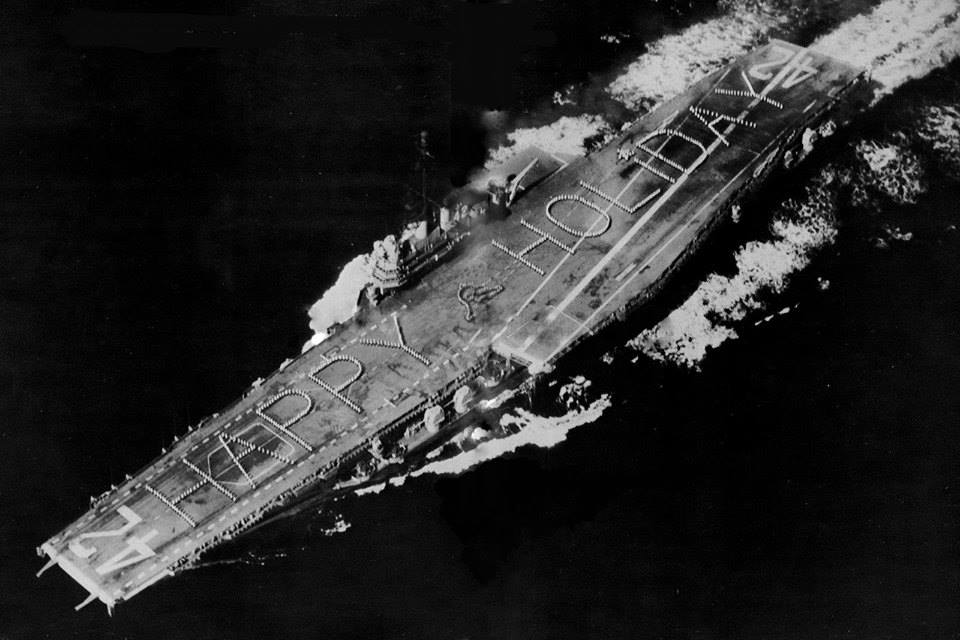 Originally laid down as the future USS Coral Sea in December 1943, she was renamed in honor of the late FDR in May 1945– first time (but not the last) that the Navy made an exception to the traditional naming of fleet aircraft carriers for battles or famous ships.

Commissioned too late for WWII as CVB-42, the big (968-foot/45,000-ton) carrier lost her very 1945 strait-deck, open bowed appearance via a two-year SCB-110 modernization at Puget Sound Naval Shipyard between 1954 and 56, and emerged at some 51,000-tons standard displacement with the more modern angled deck and hurricane bow that is still distinctive among American flattops today.

The above image was taken as FDR was rushed from her post-modernization sea trials to complete a surge operation with Carrier Air Group 17 (CVG-17) embarked for Sixth Fleet.

At the time, Roosevelt was arguably the largest and most capable carrier anywhere in the world– sisters USS Midway (CVA-41) would not complete her SCB-110 in Sept. 1957 and USS Coral Sea (CVA-43) wouldn’t complete her SCB-110A mod until 1960; while the two new “supercarriers,” class leader USS Forrestal (CVA-59) and USS Saratoga (CVA-60) were so busy with shakedowns and post-delivery refits they weren’t ready to deploy overseas with air wings for real until 1957.

Nonetheless, the still-infant Forrestal and the newly rebuilt FDR were called up to bat.

The U.S. received information on 6 November 1956, that the Soviets intended to deploy six ships from the Black Sea to the Eastern Mediterranean. Just four minutes before midnight the Joint Chiefs of Staff ordered Forrestal (CVA-59), Franklin D. Roosevelt, a cruiser, and three divisions of destroyers to the vicinity of the Azores Islands to reinforce the Sixth Fleet. Adm. Arleigh A. Burke, CNO, in the meanwhile dispatched Coral Sea and Randolph to steam off the Egyptian coast, from where they could support the evacuation of Americans or strike against the Soviets. Submarines deployed to reconnaissance stations, and antisubmarine warfare aircraft and ships patrolled multiple areas across the Atlantic and Mediterranean. The operations by the Sixth Fleet during subsequent weeks included the logistic support of the initial UN peacekeeping forces that arrived in the area on 15 November. Franklin D. Roosevelt returned home from the tense voyage on 9 December 1956, and on the 13th the Sixth Fleet stood down from a 24-hour alert status.