One of these things is not like the Others

Two Forrestal-class supercarriers, (listed from bottom to top) USS Independence (CVA-62), and USS Saratoga (CVA-60), steaming alongside the Essex-class fleet carrier USS Intrepid (CVA-11). Underway in 1961, with crewmen paraded on deck in their whites to spell out commemorating the (then) 50th Birthday of Naval Aviation (8 May 1911). 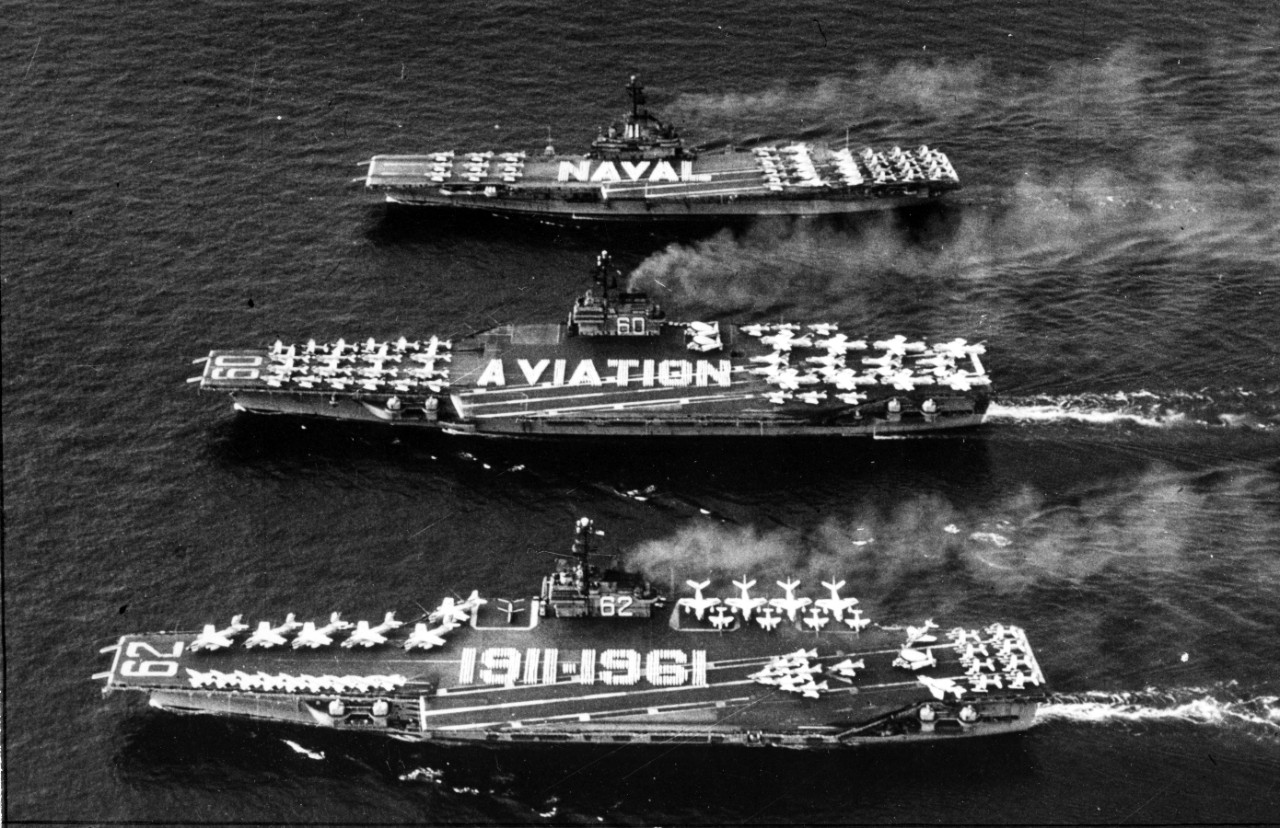 Official U.S. Navy Photograph, from the collections of the Naval History and Heritage Command. Catalog #: NH 97716

While Indy and Sara were laid down in 1954 and 1952, respectively– making them just a couple years past shakedown when this image was snapped– the 80,000-ton, 1,070-foot leviathans were in a whole different league than the Fighting I who had joined the fleet just a decade prior to their keel laying.

Nonetheless, in a real sense of irony, the 40,000-ton, 872-foot Intrepid, who earned five battle stars and the Presidential Unit Citation during World War II, and a further three battle stars for Vietnam service has outlived all of the Forrestals, berthed at Pier 86 on the Hudson River in New York City since 1982.

Further, she is still serving today in addition to her museum operations, hosting military events in the NYC area, and standing ready, as needed, for use as an Emergency Operations Center for the Big Apple, complete with a “secure space” installed in 2006 for FEMA and the like. It wouldn’t be the first time. Following Sept. 11th, she was home to the FBI’s response in the city for five weeks.

Interestingly, the Intrepid Museum recently announced the acquisition of a new aircraft to its collection, a Douglas F4D-1/F-6A Skyray. The exact aircraft, (BuNo 134836) acquired from the New England Air Museum in Windsor Locks, Conn., previously flew from Intrepid in 1961– and is likely in the above image. The Skyray will be added to the Museum’s flight deck on Tuesday, July 27, 2021, becoming the 28th plane in the Museum’s aircraft collection.

Here we see the Aviso de 1ª Classe NRP Afonso de Albuquerque (F470) of the Marinha Portuguesa in the 1950s. A British-built sloop intended for colonial service, her crew made a heroic, if often forgotten, last stand in 1961.

Looking to refresh their navy to provide some new ships to patrol the Portuese empire, which included Angola, Mozambique, and Guinea-Bissau in Africa as well as the Goa, Daman, Diu, and Timor enclaves in India and Macau in China, Lisbon contracted for a four-pack of avisos, two first-class and two second-class, from the British shipbuilding firm of Hawthorn Leslie, Tyne.

The two first-class units, our own Afonso de Albuquerque and her sister Bartolomeu Dias (F471) were larger, at about 2,400-tons full load, and carried a quartet of 4.7-inch Vickers DP guns. Capable of making 21 knots, a speed they surpassed in trails, they could voyage 8,000nm at 10-knots. Ironically, while they would have been third or fourth-tier warships in virtually any other European navy of the day, they were the largest and most formidable Portuesese surface combatants of the 1930s.

Afonso de Albuquerque was named after the famous Duke of Goa, a 16th Century Portuguese admiral and governor of India who grew the country’s empire. Her sister, Bartolomeu Dias, is named after a famous Portuguese explorer surpassed only by the great navigator, Vasco De Gama.

Completed in 1935, Afonso de Albuquerque soon got into trouble as her green crew revolted in 1936 while in Lisbon harbor. The revolt didn’t work out too well for the ship who was damaged by shore batteries and was grounded.

Repaired and sent on her way, she spent her early career in African waters. There, while operating from Mozambique in November 1942, she responded to the sinking British troopship RMS Nova Scotia (6,700t)— packed with Italian internees– off the coast of South Africa, torpedoed by U-177. Alerted by the Kreigsmarine through diplomatic channels in Berlin and Lisbon, the Portuguese sloop sailed to the area but was only able to rescue 194 of the 1,052 people aboard.

Continuing her neutrality patrol work, Afonso de Albuquerque was part of the convoy to liberate East Timor from Japanese occupation in September 1945.

Fast forward to 1961, and tensions between Nehru’s India and the Portuguese enclave at Goa, Daman, and Diu on the Indian subcontinent were boiling over. Whereas the Indian fleet contained an aircraft carrier, Vikrant (ex-Hercules), and two cruisers– Delhi (ex-Achilles) and Mysore (ex-Nigeria), as well as numerous modern destroyers, submarines, and frigates, the Portuguese only had four aging 1930s-era avisos in the area: Afonso de Albuquerque, Bartholomeu Bias, Gonsalves Zarco, and Joao de Lisbon (1,200t, 2×4.7-inch) along with a handful of even lighter gunboats.

The opening salvos were fired by the Indians at around 1200, who were soon plastering Afonso de Albuquerque with a combination of air-burst and HE rounds at a range of 7,500 yards. The Portuguese sloop, outgunned and in a terrible tactical situation, returned fire and tried to sortie out to engage her twin opponents.

Within 20 minutes, Afonso de Albuquerque was in bad shape and made for the shallows where she could beach and allow her crew to evacuate to shore. By 1410, the ship was a wreck and her crew ceased firing, in all letting some 400 shells fly at the Indian task force.

The Portuguese losses were negligible, with radioman Rosário da Piedade killed, commander CMG Cunha Aragão seriously wounded and 50 others lightly wounded. To this day, the Portuguese Navy contends they made several hits on their Indian opponents and inflicted several casualties, although the New Dehli denies this.

The next day, the Indian military took control of Goa, and CMG Aragão’s crew surrendered ashore to invading forces. In all, by sunset of 19 December, the 45,000-strong Indian force had 4,668 Portuguese soldiers and sailors in custody.

The Soviets, who were trying to cozy up to every newly independent former colony, were ecstatic. 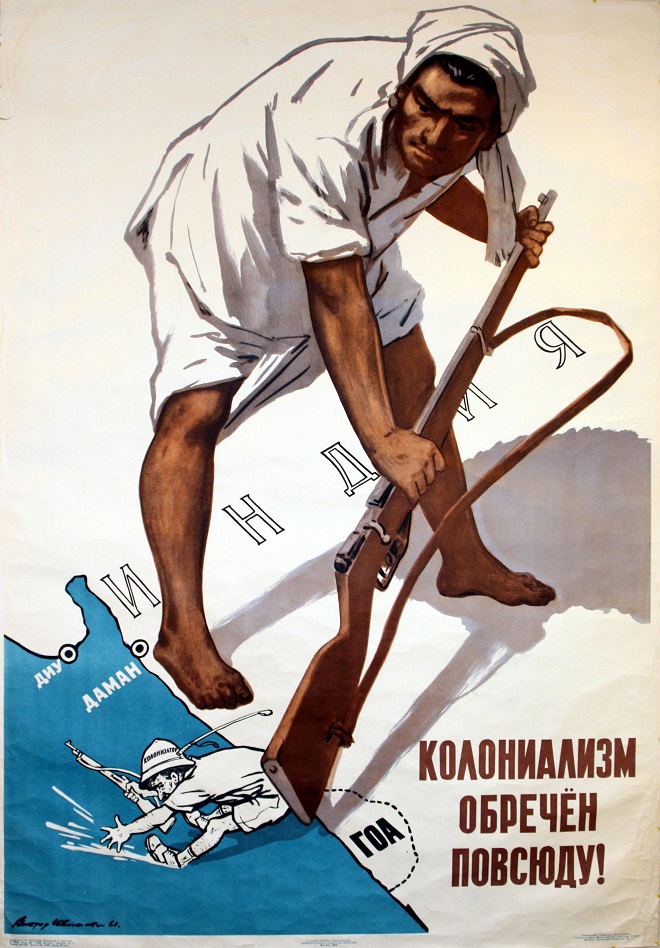 “Colonialism is doomed everywhere”. Soviet poster showing the Indians kicking the Portuguese out of Goa. 1961

Afonso remained grounded at the beach near Dona Paula for a year when she was towed to Bombay and her hulk subsequently renamed Saravastri by Indians, although she was never put in service. Various items and relics from her fill Indian museums while the bulk of the ship was sold as scrap in 1963.

As for her sister, Bartolomeu Dias, she was converted to a depot ship and renamed São Cristovão in 1967 then later broken up.