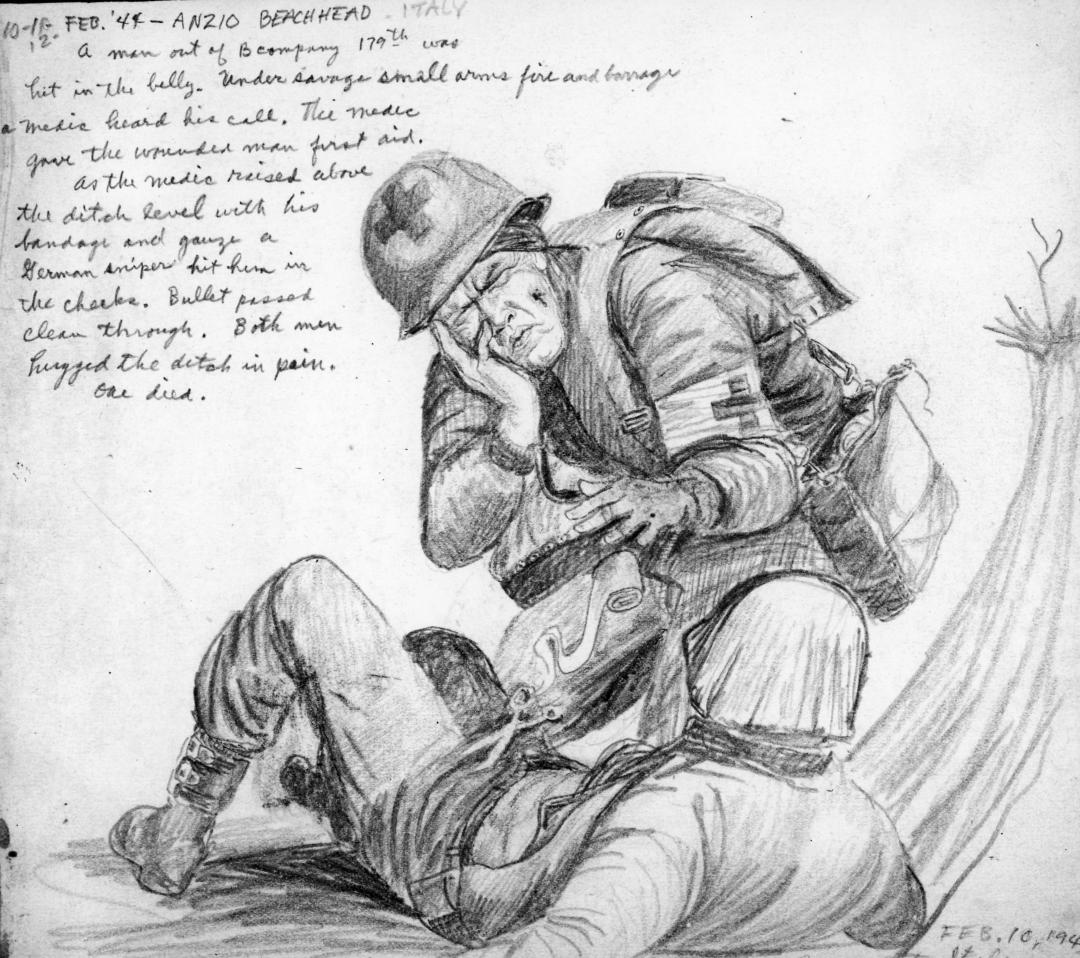 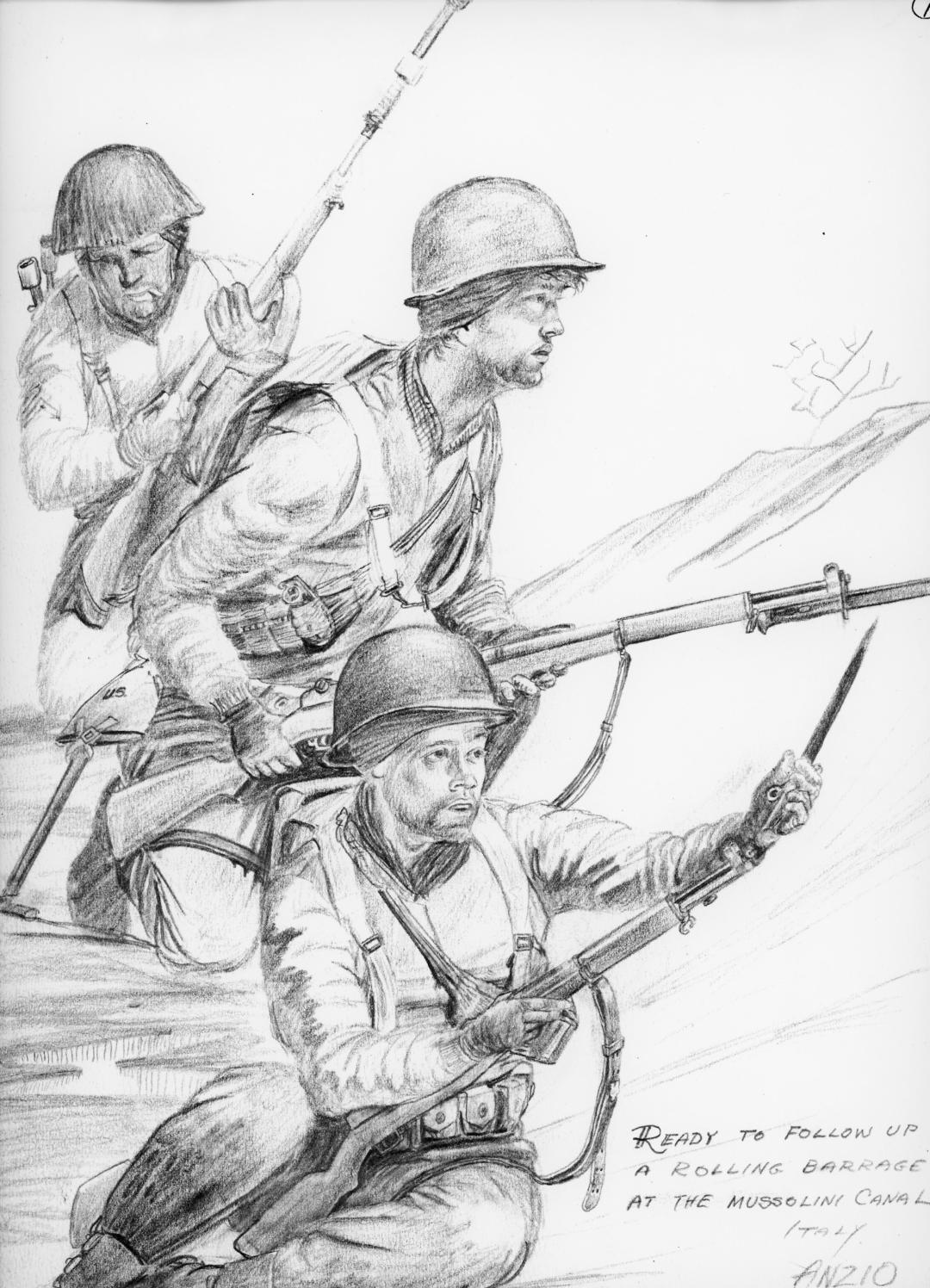 An unofficial war artist, Echohawk was a Pawnee, Kit-Kahaki (warrior band) and “saw the elephant” firsthand as an infantryman with the 45th’s 179th Infantry Regiment, earning the Combat Infantry Badge, Bronze Star, and Purple Heart (3), after enlisting in the Oklahoma National Guard in 1940 at age 18.

His outfit was filled with depression-era cowboys, farmers, and more than a thousand Native Americans– recently brought back into the attention of many due to the recent Liberator series on Netflix– with Echohawk and William Lasley, a Potawatomie, leading a successful charge at Anzio Beach to take the “Factory” which insured that the Allied toe-hold at Anzio Beach was secure. 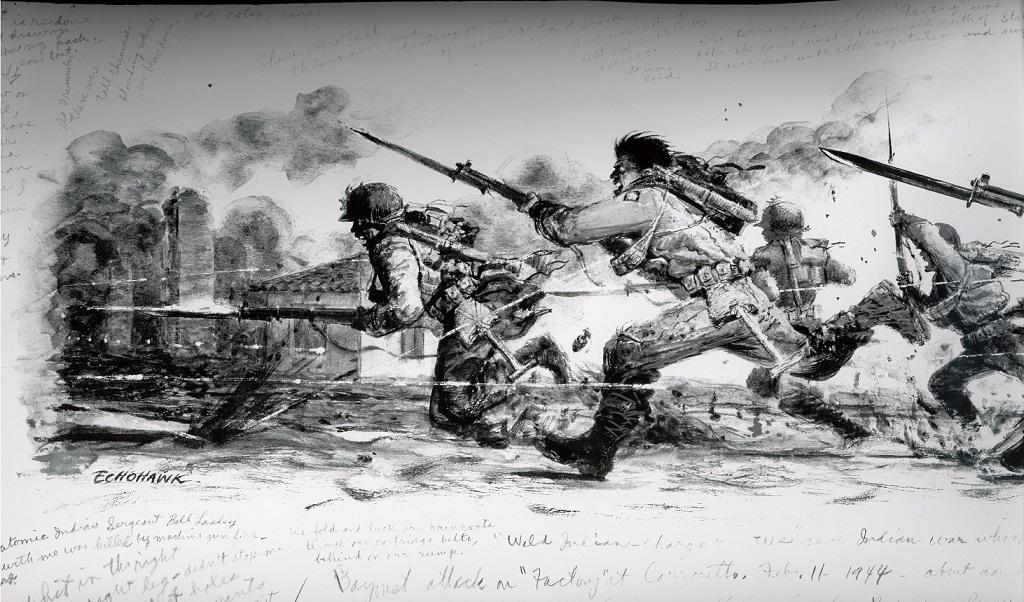 A number of his drawings made it into wartime publications.

The Thunderbirds suffered 26,449 casualties in 230 days of combat across Europe, some 187.7 percent of its authorized strength.

As for Echohawk, he went on to become a well-recognized artist specializing in Western and Native themes and is well-exhibited at the Gilcrease Museum and the National Cowboy and Western Heritage Center.

Trail of Tears, by Brummett Echohawk, black, and whitewash, 1957 via the Gilcrest

SGT Echohawk passed at age 83 in 2006 and is buried in Pawnee’s Highland Cemetery. 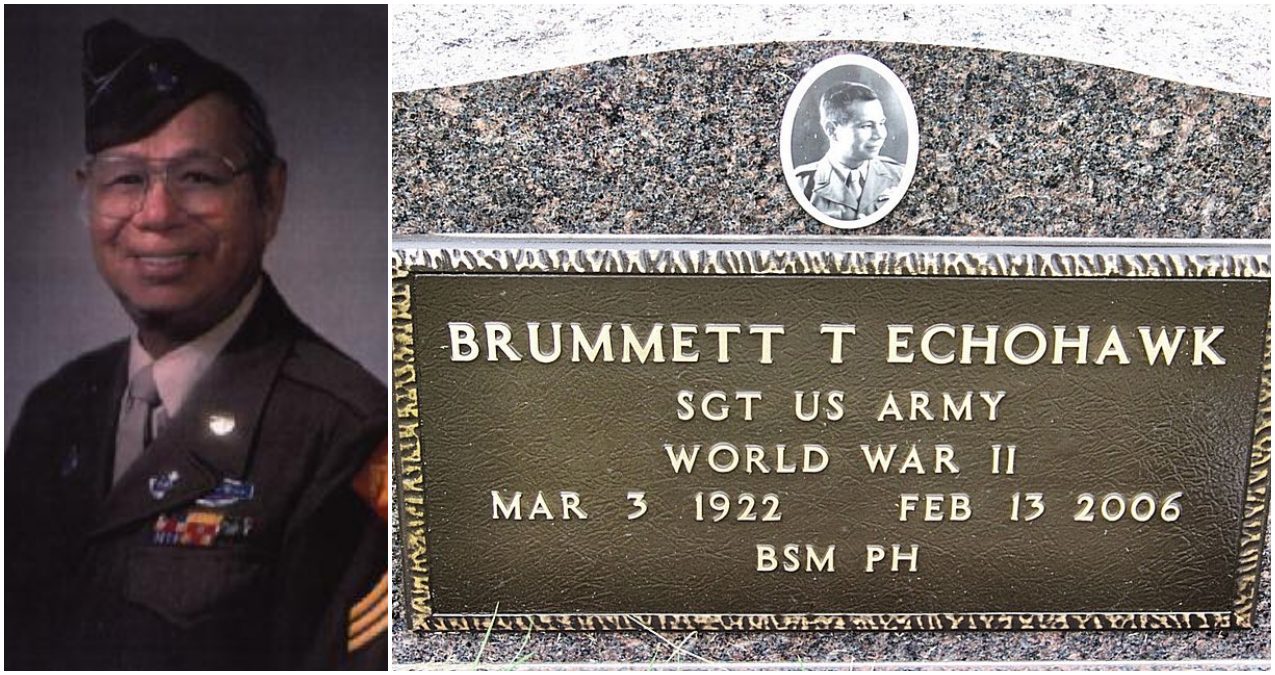 For more information, visit the Echohawk Project and pick up his books, including Drawing Fire: A Pawnee, Artist, and Thunderbird in World War II.

Four Hours from Sicily to Dachau

For those looking to get a little war movie fix over the coming holidays, I suggest you check out The Liberator on Netflix. Based on Alex Kershaw’s excellent 2012 book of the same name, it covers the real-life “500-Day Odyssey from the Beaches of Sicily to the Gates of Dachau” traveled by (later Brig Gen.) Felix L. Sparks.

Sparks, who enlisted during the Depression to make sure he was fed, was first a company and later a battalion commander in the 45th (Thunderbird) Infantry Division’s 157th Infantry Regiment— drawn literally from “Cowboys and Indians.”

Notably, the unit saw the elephant– and by all accounts was trampled flat by it– at Anzio, then went on to duke it out against crack SS mountain troops (the dreaded Black Edelweiss of 6. SS-Gebirgs-Division “Nord”) in the frozen hell of Reipertswiller, before playing a key part in the taking of Aschaffenburg in the face of downright wasteful and fanatical resistance in the last days of the war. Famously, the unit was also involved in the controversial death of unarmed SS troops at Dachau during its liberation.

The four-part series is filmed in a new CGI hybrid Trisoscope technique which looks vaguely similar to what A Scanner Darkly was produced in a few years back and an upgrade to the woefully underappreciated Heavy Metal and circa 1978 version of Lord of the Rings.

Now don’t write off The Liberator as a “cartoon,” as the technique is on point and allows for an easy and more accurate (ironically) portrayal of period places and equipment– especially tanks, and aircraft– that is just not possible in live-action films (admit it, you cringe a little bit every time you see the Russian T-34/85s mocked up like Tiger Is in Kelly’s Heroes). 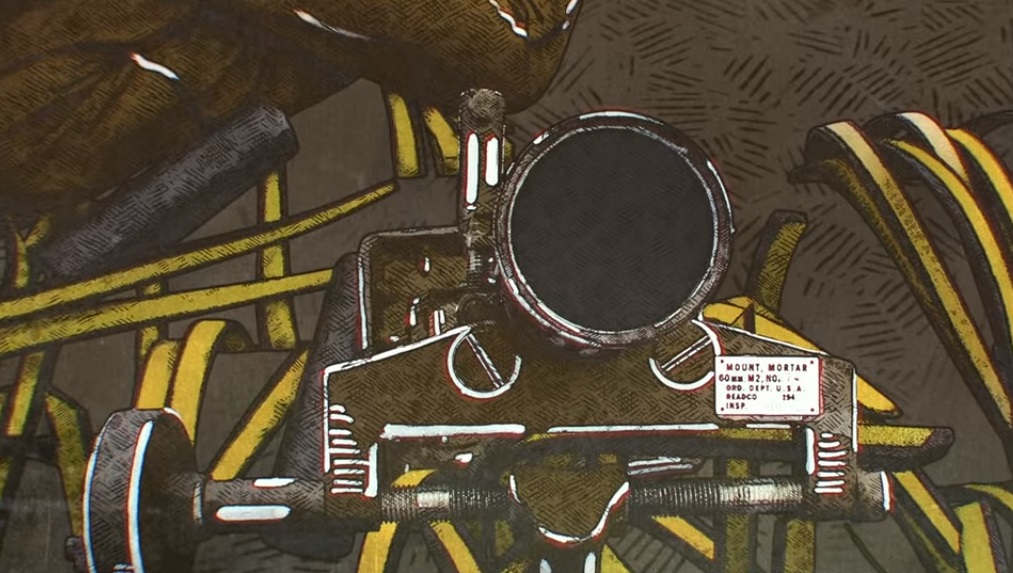 How about that mortar data plate?

While not Band of Brothers, and Sparks is not Dick Winters, The Liberator is a good retelling of a story that is oft forgotten. There are way worse ways to waste four hours.