End of the line for VEPR?

A classic Molot VEPR in .308 with the long 22-inch barrel and Counter Sniper Mil-Dot 4-16x44mm optic with illuminated reticle. Now more expensive than ever!

Back in January, I spoke at length with people over at Molot who were working hard on extending their exports of VEPR rifles and shotguns to the U.S. They were hopeful that the new Trump administration would be friendly to lifting some sanctions on Russian-based companies. Russian-made firearms were popular export items to the states until the conflict in the Ukraine and the resulting international backlash triggered a host of official embargos.

Per figures from the International Trade Commission, 204,788 firearms of all kinds were imported from Russia in 2013.

This figure plunged to just 9,556 in 2015 — mainly from Molot, the only large firearms maker not named in sanctions.

Well, it looks like that figure is going to be a lot lower in 2018…

Some are hopeful the new management in Washington will be able to lift barriers to overseas firearm imports erected over the years, though the going could be slow.

President Donald Trump on Friday said it was “very early” to tell if the United States should lift sanctions on Russia, but that he seeks a “great relationship” with Putin and Russia.

On the campaign trail, Trump’s platform on trade concentrated on American jobs while floating the possibility of a tariff on all imported goods to help ease the current trade deficit. However, the Republican’s position on gun rights promised to curtail federal gun bans and limits. The two concepts, when balanced against one another, leaves open the possibility of action on foreign-made guns currently off-limits to buyers in the U.S.

I talked to industry insiders on both sides of the pond, the ATF, and the International Trade Commission to get the scoop on if bans going back to the 1960s could be reshaped.

An innovative (and probably effective) way to ban ‘assault weapons’

“Assault weapons bans” go back a quarter century with California implementing the first such restrictions in 1989. The the California Department of Justice’s assault weapon list has some registered 145,253 firearms  as of last year when I did an in-depth report on them. However, the AWB, although tweaked continually, focuses on named models and arbitrary cosmetic features such as hand grips, barrel shrouds, and threaded muzzles, deeming such guns “assaulty” while they accidentally wind up making such innocent models as the Marlin Model 60, a tubular magazine .22LR popgun, illegal in some states.

Such bans aren’t very efficient, nor do they reduce crime, as witnesses a decade after in a postmortem on the Federal Assault Weapons Ban of 1994, which sunsetted in 2004.

Even the sometimes left-leaning New York Times noted that, “The continuing focus on assault weapons stems from the media’s obsessive focus on mass shootings, which disproportionately involve weapons like the AR-15, a civilian version of the military M16 rifle.”

Further, manufacturers can just rename their guns and delete cosmetic features, selling state-compliant models. As such, you can still very much buy modified AR-15-ish rifles in California legally over the counter. Sure, they have bullet buttons and look funny, but at their heart they are still ARs.

A state-compliant AR. Even these abominations are banned in Massachusetts, at least for now.

However, Massachusetts Atty. Gen. Maura Healey last week flipped the script and decided to re-interpret the state’s 1998 ban to include an interchangeability test on the gun’s action, as ruling whether it is banned under state law. For instance, if Mass-compliant 5.56mm semi-auto rifle accepts the same bolt carrier group and magazine of the banned AR-15, it is banned as well.

So now components, such as the bolt carrier group and charging handle, define what make up an “assault rifle” under Healy’s interpretation of Mass law….not the gun itself.

Gun grabbing genius this is. Because of the extremely broad strokes used to issue her office’s new guidance, most semi-auto centerfire rifles with the exception of a few (Ruger Mini-14, Remington 7400, Winchester 1910, etc), can be outlawed.

The thing is, Healy may have overstepped her authority and there has been a run on stores by gun owners fearing it will stick and some are promising legislation and litigation to short circuit her effort.

Either way, you can bet it is a blueprint for future moves by lawmakers to place a much more restrictive gun prohibition in the works.

Feinstein Gun Ban List of 157 Firearms You Cant Have

Direct from the good Senator’s website is the official list of 157 specifically named firearms that she intends to legally ban the sale, transfer, manufacturing and importation of.

Firearms Talk brings you this list as a public service to the gun community as a whole for your personal reference.

Cause Thompsons have been used in so much recent violence right? Is this 1926?

(Any gun that takes a banana clip is evil)

Looking at the above list we have come across the following conclusions thus far about what the lobby seems to be up to:

If you have an opinion on it, share it with your own representatives, and by all means, forward this article around.

If nothing else, it makes a good shopping list.

The song says, ‘if you can make it there, you can make it anywhere’ and gun control advocates seems to have been able to make it happen in New York. New York Governor Andrew Cuomo on Tuesday signed into law the strongest new gun laws in the country, even tougher than those on the books in California. Here at Firearms Talk we are bringing you just what this means.

Thought to long the real root of the recent spate of mass shootings, mental health professionals will be required to notify local law enforcement if they think that they are treating someone who is a potential danger to themselves or others. In this instance, the person would be refused firearms purchases and have any current guns temporarily removed. If someone has had a break with reality and is released from a mental health facility after the break has mended, it will be mandatory for them to receive outpatient treatment for a year.

Likewise, if someone gets a protective order against another, said person will have to surrender their weapons. To keep guns out of unintended hands, it’s now a misdemeanor to have an unlocked firearm in your home.

Tougher punishments will be meted out to violators such those who would kill first responders such as firefighters, paramedics, and law enforcement officers. Those who would attack them would be looking at a mandatory life sentence without parole. If you bring a gun to a school, it’s now a felony.

In response to the recent scandal of a local newspaper publishing the names and addressed of firearms permit owners, it will now be harder for media organs to obtain this information. This small facet could be the only good piece of pro-second amendment legislation in the new law. 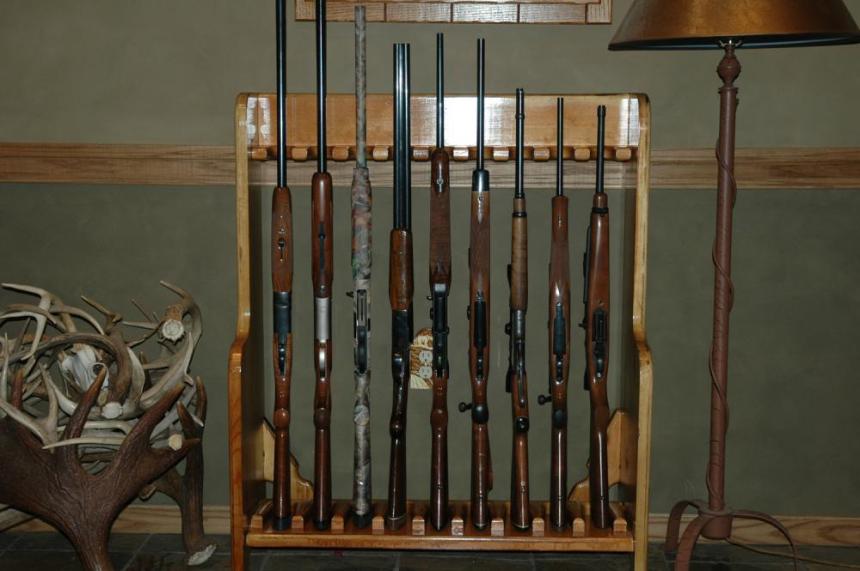 If you live in New York, this gun rack is gonna get a bit lighter..

One of the original 13-colonies, New York in early history was a bulwark of support for the 2nd Amendment. However, in recent generations the Empire State has implemented some of the toughest concepts in a very imperial effort to disarm their law-abiding citizens.

First of all the state is now classifying any shotgun with one ‘military style feature’ (pistol grip, bayonet, detachable magazine, etc.) to be a vicious assault weapon as is all semi-automatic pistols and rifles with a detachable magazine and one of those features will likewise, be an assault weapon. And we all know what they do with those now don’t we! Yup! Can’t buy anymore of these in New York.

Current owners of these evil things will be allowed (for now?) to keep them so long as they are registered within the next 365. This could mean that New Yorkers (besides those in NYC) have a slim shot (excuse the pun) at obtaining one of these in the meantime so much as it’s registered within that year. If you ever want to sell it, it can’t be to another New Yorker and must leave the state for good. Selling it on the downlow after that will be unwise, as you have to have it re-certified every five years.

Speaking of selling on fly, it’s illegal now to sell to private parties (except for immediate family) without going to a FFL and having them perform the transfer. No more Craigslist, armslist, and gunshow cash and carry situations. It’s important for the government to know who has guns, and what they have; after all, you can’t seize something if you can’t find it.

Those better not be 17-round mags there citizen. And even if they are ten, they better not be fully loaded. We can trust you with 7-rounds, but 8 is crossing a line.

If you have a magazine that is over 10-rounds in New York State, the login to gunbroker or gunsamerica is pretty easy to do. I say that because the state now requires you to get rid of that bad boy within a year, no exceptions. You can destroy them, turn them in, or sell them (out of state) within the coming year but you can’t possess them. Period.

Furthermore, if you have a 10-round magazine, you can only be trusted to load it with 7-rounds of ammunition. Don’t get caught with your P22 Winchester rimfire pistol fully loaded.

And your ammo too

If you live in New York, forget your login to Lucky-gunner and Ammotogo, because you can’t order ammo online and have it shipped to you anymore. All ammo purchased in the state has to be bought face to face from an FFL holder. Said FFL holder has to perform a background check on you through the state and track the sale. This sale will be reported to the state in real time. Buy a box here or there and you will be OK. Buy a case and you can expect a knock on your door to explain yourself. After all, this isn’t America, its New York.

One state down, 49 to go. Contact your local, state, and federal representative as soon as possible to let them know how you feel.

Governor Cuomo and a group of legislators passed the law in the dead of the night with no public discussion.

Meanwhile, auctions for PMAGs are breaking the $60 per unit cost.  This for mags that went for $9 just 30 days ago. Just make sure they don’t go to New York