The F-4 Phantoms of the Colonial Navy

Royal Navy Fleet Air Arm FG.1 Phantoms of No. 892 Naval Air Squadron back on board the carrier HMS Ark Royal (R09) after a visit to a US Naval Air Station (NAVSTA) Oceana where they worked up with USS Saratoga. The Royal Navy roundels had been “zapped” and replaced with interwar American Navy “meatball” insignia, and on XV590 001/R, the “Royal Navy” flash had been replaced with one for the “Colonial Navy.” 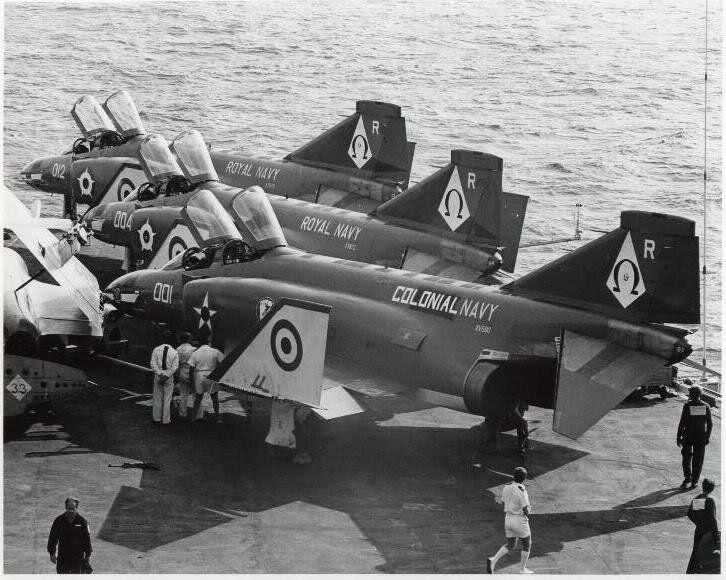 Originally founded in 1942 to operate Grumman F4F Wildcats (Martlets) from escort carriers, 892 NAS in the 1970s was the only operational RN Phantom squadron, and the force’s only fixed-wing carrier-capable squadron at the time– hence the Omega tail code–and flew from Ark Royal until the mighty British flattop was decommissioned in 1978.

FAA Phantoms got lots of cross-decking in the 1970s when the U.S. Navy was pushing over a dozen flattops around the world, as seen here on USS Independence, This allowed a lot of room for shenanigans.

892 NAS was disbanded on 15 December 1978 and its Phantom FG.1s were transferred to the RAF who continued to fly the type, sans tailhooks, until 1992.