The Thunderbolt on the Move, 75 years ago

Just four days before VE-Day, a unit of late-model M4E8 (Easy Eight) Sherman medium tanks of the U.S. 11th Armored “Thunderbolt” Division are seen crossing the Muhl River near Neufelden, Austria, 4 May 1945. Note the exhausted tankers and open carton on C-rats on the front slope of the lead tank.

Late to get into the war, the 11th AD landed in France on 16 December 1944 and saw their first combat just two weeks later defending the highway to Bastogne during the Battle of the Bulge. Remaining in almost constant contact with the enemy for the next four months during which they suffered nearly 2,900 battle casualties, the Thunderbolt pierced the Siegfried Line, swept through the Rhine, and raced across Bavaria to Austria where it was thought the hardest cases of the SS would fight a last stand.

Instead, on 5 May 1945, the day after this picture was taken, units of the 11th liberated the Gusen concentration camp then swiftly moved on to the main camp at Mauthausen on the 6th. They had covered the 900 km from Bastogne through Germany and Austria in 126 days.

An M8 Greyhound armored car of the 11th Division entering the Mauthausen concentration camp in Austria 6 May 1945.

As noted by the U.S. Holocaust Museum, “The division’s arrival prevented the SS guards from murdering thousands of concentration camp prisoners by dynamiting the underground tunnels and factories where the inmates had been forced to work.”

The 11th would remain in the area, where they helped process more than 19,000 prisoners, and would be disbanded 31 August 1945. The Thunderbolt was never reformed.

For more on the Army’s liberation on The Camps, see the CMH’s dedicated page full of resources on the matter.

A Swedish-manned and produced m42 KP armored vehicle in UN service during the Congo Crisis, 1960s.

Note the Carl Gustav m/45 “K-gun” submachine gun in the hands of the Swedish commo guy.

The other submachine gun– seen in the hands of what is likely a Congolese army soldier (ANC) blessed into UN operations, although it should be pointed out that peacekeepers from his Ghana, Nigeria, and Ethiopia also participated in the operation– is a rarely encountered Belgian-made Vigneron.

Formed in 1960, the Opération des Nations Unis au Congo (ONUC) became the largest, most complex, and most expensive UN peacekeeping mission during the Cold War. Between 1960 and 1964, nine different battalions of Swedes served in the Congo, with 19 soldiers of the Three Crowns losing their lives there.

As for the armor, the WWII-era Scania/Volvo Terrängbil m/42 KP used a gasoline engine and had up to 20mm of armor, though this was as low as 4mm in some places– able to be penetrated by most small arms rounds more powerful than a pistol. They could accommodate as many as a dozen men in the open hull while the exposed turret mounted a twin Kulspruta m/36 (KSP m/1936) water-cooled machine gun.

How about those watercooled m/36s?

The Swedes sent 15 KPs to the Congo and the vehicles saw lots of heavy use.

They also repurposed local armor as well. I give you “Bibi-Belle” 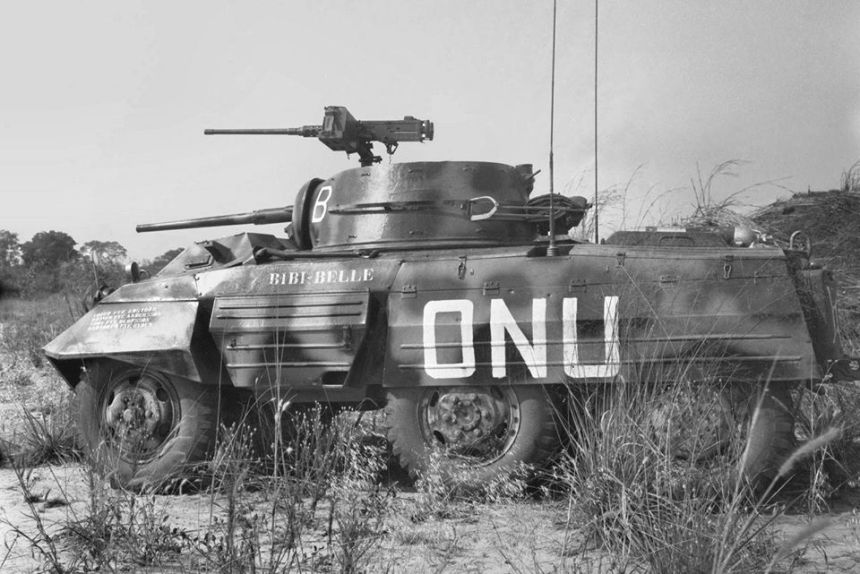 Keystone in Paris, 75 years ago today

Here we see American troops of the 28th Infantry “Keystone” Division march down the Champs Elysees, Paris, in the hastily planned “Victory” Parade through the City of Lights, 29 August 1944.

Formed largely from Pennsylvania National Guard units, the 28th was called into federal service on 17 February 1941 then spent two years training stateside before they went overseas on 8 October 1943. Landing at Normandy on 22 July 1944, the division was thrown into Operation Cobra around Saint-Lô and stopped off in Paris soon after.

The below silent film from the National Archives shows the unit in fine form, complete with Shermans, M10 Wolverine tank destroyers, M8 Greyhound armored cars, heavy and light artillery, and tons of jeeps, trailed by French on bicycles to the delight of the crowd.

The 28th would go on to fight in the Hürtgen Forest, at the Battle of the Bulge, in the Colmar Pocket and against the Siegfreid Line, spending 196 days of combat and suffering more than 2,300 KIA.

Still, their boots and tracks echo along Paris streets today.

The city has been celebrating with a 75th-anniversary parade, ceremony, and events.