Above we see about half of the crew of the 97-ton Bulgarian torpedo boat Drazki (a name also seen in the West as Druzki, Drzki, and Drsky), some 110 years ago this week after they seriously damaged the fine 4,000-ton British-built Ottoman cruiser Hamidiye at the Battle of Kaliakra during the Balkan Wars, one of the best examples of a humble torpedo-armed fast attack craft landing a confirmed and debilitating hit on a much larger enemy warship. Note the shrapnel hole in Drazki’s aft stack.

Founded on 13 January 1899 as the first modern maritime arm of what was then the Principality of Bulgaria, the Bulgarian Navy was cut from whole cloth with a dash of assistance from German, French, and Russian naval experts. Just a dozen years old at the start of the eight-month First Balkan War with Turkey, in which Bulgaria was allied in the Balkan League with Greece, Serbia, and Montenegro against the “Sick Old Man of Europe,” the Bulgar fleet was tiny by all comparisons.

In fact, it fits on a single page of Jane’s Fighting Ships with lots of white space left over.

Besides a couple of armed coasters, spar-torpedo launches, and river gunboats, the Bulgarian Navy could count just the French Chantier-built “cruiser” Nadezhda (715t, 2×4″ guns, 17 kts) — a craft that held the first Bulgarian wireless telegraph station and doubled as a royal yacht– and six Schneider & Creusot-built Drazki-class torpedo boats (Drazki, Smeli/Smyeli, Hrabri/Khrabri, Shumni, Letyashti, Strogi) and which had been shipped to Varna in sections and assembled there by the Bulgars in 1907-08.

The six 124-foot Drazki boats used a pair of Temple/Norman water-tube boilers trunked into two stacks to generate 2,000 shp on their sole VTE engine, capable of making turns for 26 knots on a single screw. Armament was three torpedo tubes– one in the bow, two on a stern turnstile directed to opposing sides, with no reloads– and two 3-pounder (47mm) Schneider M1902 low-angle guns arranged port and starboard behind the closet-sized wheelhouse. capable of floating in just under nine feet of water, they were ideal for littoral combat.

With a normal coal supply of 11 tons, they could steam for 500 miles at 16 knots. However, they could overload with as much as 27 tons of coal, stretching their legs past 1,000.

As it turned out, the Battle of Kaliakra, fought some 30 miles from Varna, would be the first fleet action for the Bulgarian Navy when, on 21/22 November 1912 (Nov. 7/8 Gregorian), the Ottoman cruiser Hamidiye (commanded by Hussein Rauf Bey) and two destroyers were escorting a convoy of two cargo ships from Constantinople to Constanta and, presenting the Bulgarian fleet an ultimatum to surrender the next morning, the Bulgarians came out to play.

The Ottoman cruiser (classified as a battleship by the Turks) Hamidiye and its commander, Captain Hüseyin Rauf Bey, early 1900s

In a running night action with Captain Dimitar Dobrev’s (an officer who has survived the sinking of the Russian cruiser Dmitry Donsky at Tsushima in 1905) torpedo boat squadron consisting of Drazki and three of her sisters– Letyashti, Smeli, and Strogi— the Bulgarians pressed their attacks increasingly closer but failed to make a hit against the big Turk.

Letyashti, leading the charge with Dobrev aboard, fired and missed at 1,500 feet then pulled away.

Smeli closed to within 1,000 feet and missed, earning a shrapnel hit that wounded her executive officer.

Strogi held her fish until she got to within 300 feet, then missed.

Finally, Drazki, the last in line and last to attack and commanded by Midshipman 1st Class (Acting LT) Georgi Petrov Kupov, closed to within 150-200 feet, effectively point-blank range, and landed a torpedo against Hamidiye. The Turkish armored cruiser was hit in her bow, the explosion opening a 10-foot hole and allowing the Black Sea to flood the vessel. Covered by the Turkish destroyers, Hamidiye, bow almost underwater, was able to retire back home carrying eight dead and 30 wounded with her.

According to most accounts, it was only the fact that the Black Sea was exceptionally calm that night that the Turkish cruiser didn’t head for the bottom.

Catching a hit in her stack from the Turkish torpedo boat destroyer screen, Drazki and company would sail back to Varna by dawn and a heroes’ welcome, the Ottoman blockade of the Bulgarian coast effectively broken.

The photograph of the crews of the torpedo boats that attacked the Turkish cruiser “Hamidiye” on November 8, 1912.

It would be the only significant Bulgarian naval action of the Balkan Wars and Hamidiye, after repairs, would transition to the Aegean and fight the Greeks.

Two World Wars, and Beyond

Drazki and her sisters would, somewhat confusingly, not attempt to block the Romanian Danube River landings during the Second Balkan War in 1913, a task left to a force of four smaller gunboats that, when confronted with a larger Romanian force centered around the gunboat Grivița and backed up by several monitors, elected to scuttle instead.

When Bulgaria threw its lot in with the Germans and Austrians in 1915– largely to get at Serbia– the Bulgarian Navy was tasked with a mine/counter-mine war with the Russian Black Sea Fleet during the Great War that was heavy with nighttime mine-dropping in Russian-held areas and daytime sweeping in their own. In this, Shumni and Letyashti would be lost.

In Sept. 1916, Drazki and three of her sisters would conduct a series of battalion-sized amphibious landings against the Romanians, who had just entered the war on the other side– a bit of payback for 1913.

Meanwhile, the small Bulgarian cruiser Nadezhda, sent to occupy Sevastopol along with the Turko-German fleet in April 1918 following Russia’s withdrawal from the war, would be left there in 1920 and seized by the Reds who eventually scuttled her.

With the Bulgarian Navy disbanded as part of the 1919 Treaty of Neuilly, the four remaining Drazki class torpedo boats lost their torpedo tubes and became river gunboats as part of the country’s Danube Flotilla– officially under police control for interior counter-smuggling duties, their crews listed as civilians. In this lightened configuration and with a half-bunker of coal, they were able to float in as little as 4.25 feet of freshwater.

Cadets from the Navy of H.V. school on the decks of the patrol boats Hrabri, Smeli and Drazki, port of Varna, 1941

On 15 October 1942, due to improper storage of powder on board Drazki, she suffered an explosion and sank at the quay in Varna. Nonetheless, she was soon raised and repaired.

Smeli would founder at sea in May 1943 while the other three boats were captured by advancing Soviet Red Army forces at Varna on 9 September 1944. Two, Drazki and Hrabri, were placed into Soviet service (‘temporarily requisitioned’) for the remainder of the war (with Drazki picking up the name Ingul and Hrabri as Vychegda), then would be repatriated in July 1945. To comply with the Paris Peace Treaty of 1947, they were again disarmed.

The Bulgarians would keep the three sisters around in one form or another until 1954– an impressive 47-year run for vessels of a type that typically only lasted a decade.

Drazki’s daring young skipper during the attack on Hamidiye, LT Georgi Kupov, after leading the above-mentioned amphibious assaults during the 1916 Romanian campaign, became the Bulgarian Navy’s chief of staff in September 1917, a job he held until the navy was dissolved in 1919. During the interwar period, he served as commander of the Danube Flotilla and then taught Astronomy and Spherical Trigonometry at the country’s Maritime School until 1944 when the Soviets arrested him although he was soon released. 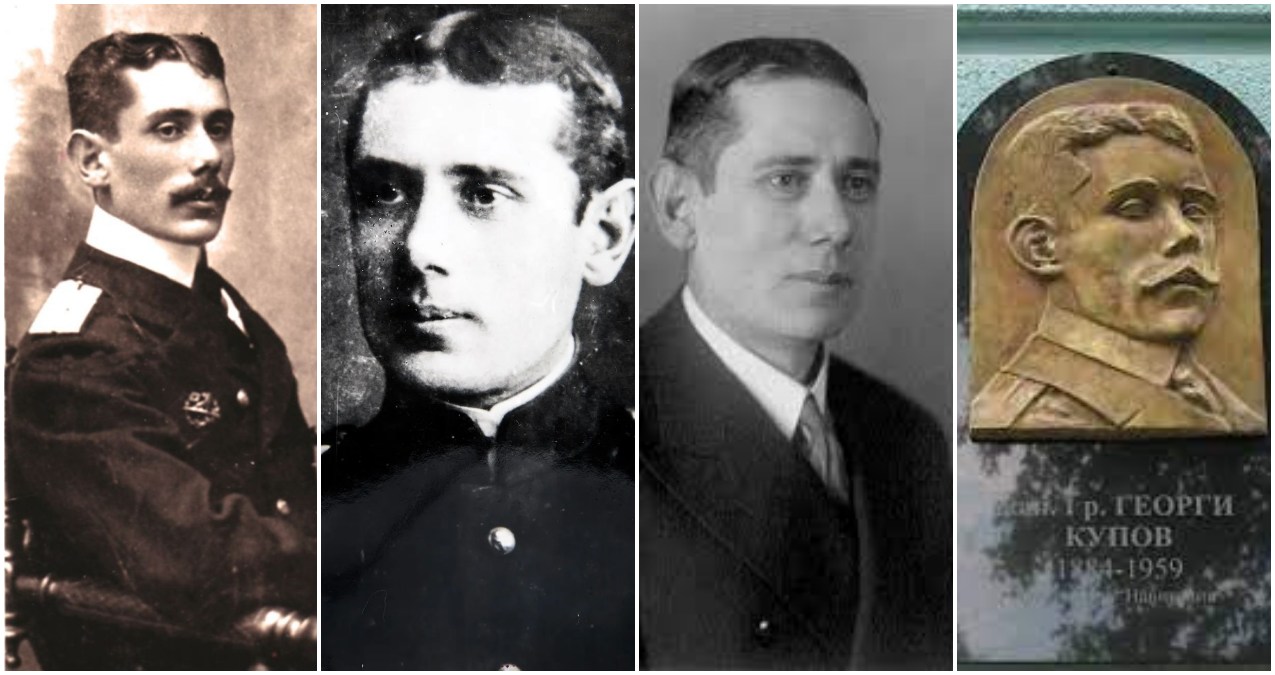 Георги Петров Купов. He passed in 1959, aged 74, and is well-remembered in Bulgaria

Ironically, Hamidiye, which had been seized by the British for seven years as part of the Treaty of Sèvres after the end of the Great War, was returned to Turkish service in 1925 and would solder on as a training cruiser through 1947. 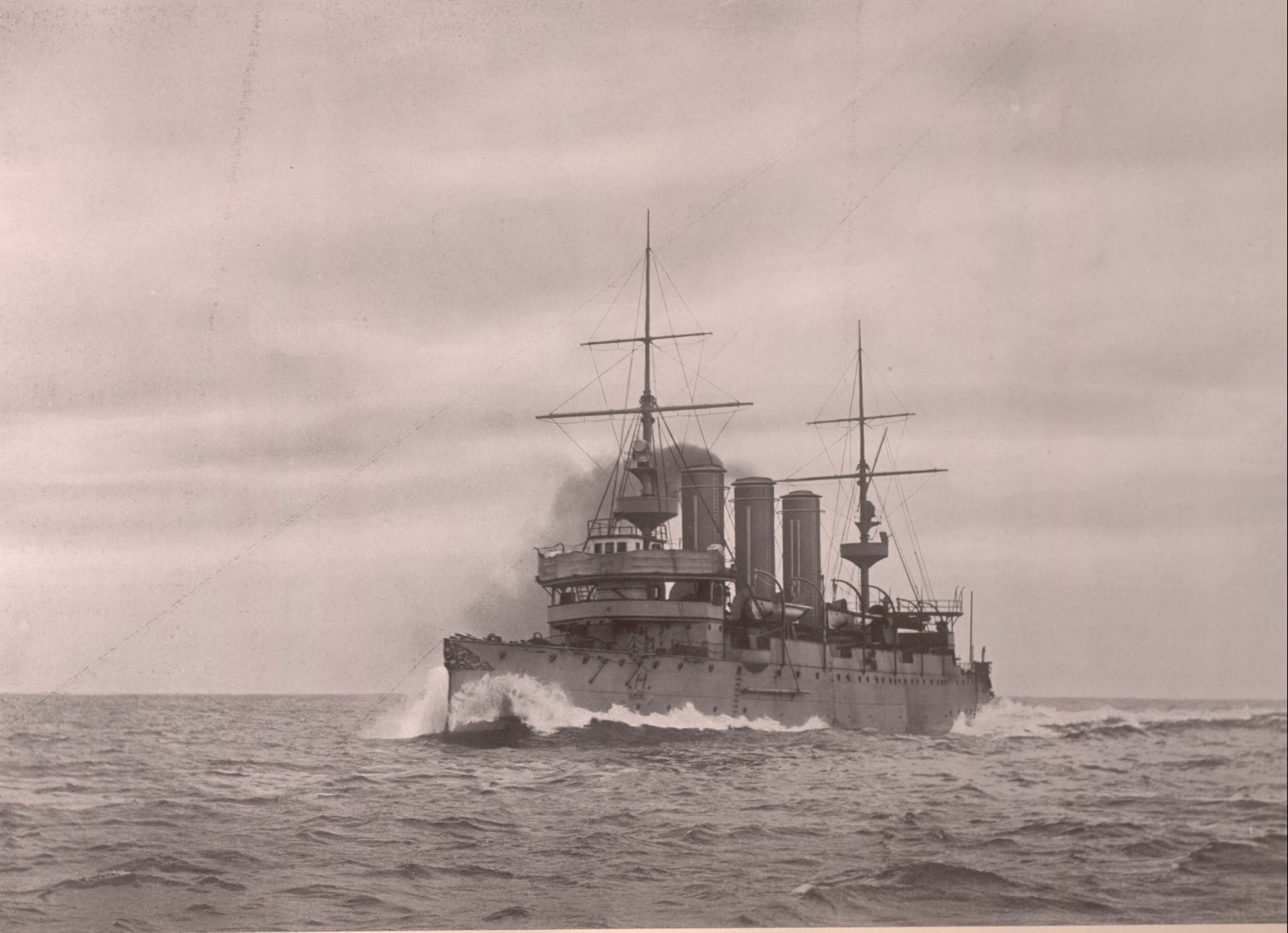 The Ottoman cruiser Hamidiye. She would only be scrapped in 1966 after a spell as a museum ship.

Speaking of which, in 1957, it was decided by the People’s Republic of Bulgaria to preserve Drazki as a museum ship for her role in 1912 but, as the three ships had largely been dismantled, the current ship that carries the legacy is mostly the hull of Strogi with the topside of Drazki and parts of Hrabri.

Kupov, 72 at the time, was present at her grand opening.

She looks good for all the Frankenstein nature of her current form, maintained by the Varna Maritime Museum.

And, importantly, her Battle of Kaliakra-perforated stack endures.

Druzki and the Battle of Kaliakra have been a favorite subject for Bulgarian illustrators over the years. 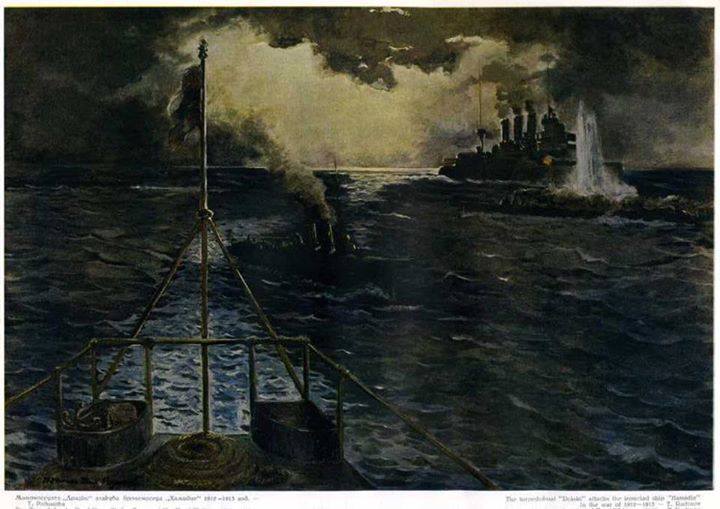 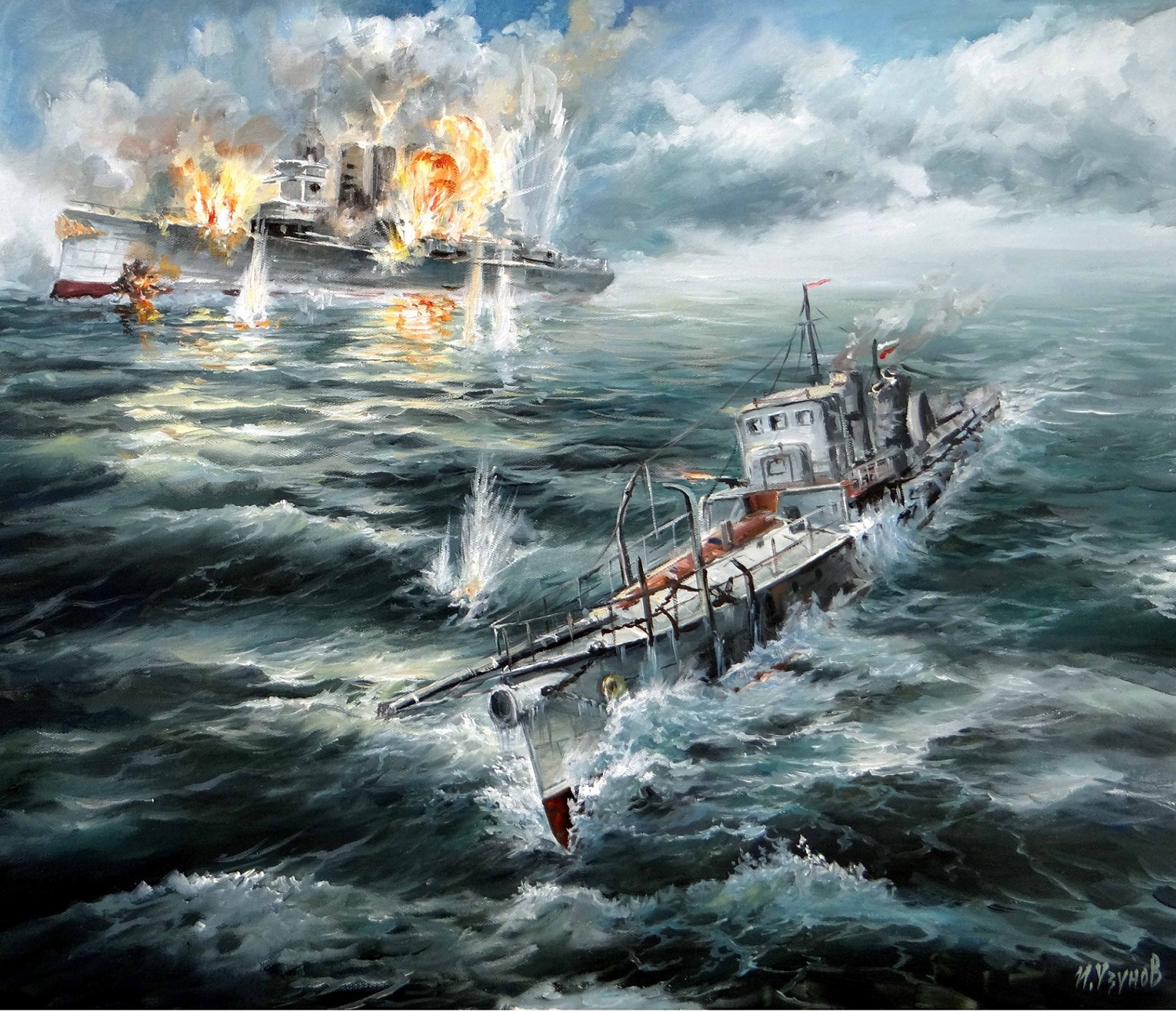 The Bulgarian Navy recycled her name at least twice, once in 1950 for a guardship (strazhevik) and then in 2004 for the Wielingen-class frigate Wandelaar, which was acquired that year after the Belgian Navy retired her.

PRINT still has its place. If you LOVE warships, you should belong.