The special Navy Seal gun you never hear about

For the past half-decade the U.S. Naval Special Warfare community has quietly used a device unique to its service– the Battelle Plummet Gun– and its half-Batman, half-Star Wars, and all-cool.

While after the recent activities in the Global War on Terror in which we see Navy Seals roping out of choppers and moving around on land a lot, they are actually first and foremost combat swimmers. These fighting frogmen, who evolved from the old Underwater Demolition Teams of World War II and Korea, are tasked with taking over suspect ships at sea, sinking the bad guy’s ships in port, and seizing offshore islands and structures such as oil platforms.

Commonly termed Visit Board Search and Seizure (VBSS) operations, its these actions from small boats against platforms and vessels at sea that sometimes put these special operators behind the proverbial 8-ball as the bad guys often don’t leave a ladder down to allow the frogmen easy access.

This means special devices such as a backpack-sized magnetic ship-climbing device that would “drive” up the side of a ship’s steel hull to the top, where an operator would anchor it and drop a rope ladder to the other team members below. 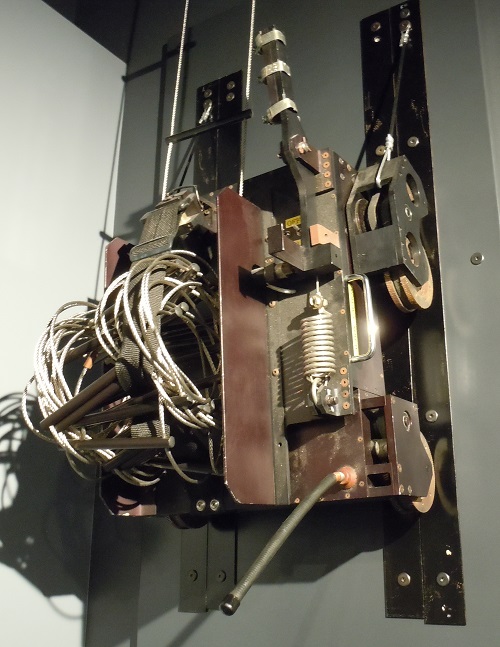 However, these are big and bulky– not to mention noisy and complicated to employ.

What would be ideal would be a grappling hook gun like the one Luke Skywalker used to escape the Stormtroopers on the Death Star with Leia in tow, or that Batman used repeatedly. Hey, about that…

Meet the 25 pound Battelle Plummet Gun, and yes, it is as big as the M60 shown next to it for scale. Image via Chris Eger

So suffice it to say, this is one piece of kit you aren’t going to add to your turn out bag just yet.