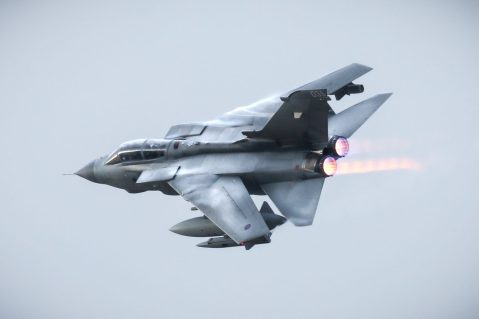 On 31 January, the RAF conducted its last operational sortie with the Tornado GR4 (pictured: the last of the two aircraft to take off, bringing an end to four and a half years of the type’s involvement in Operation ‘Shader’). Source: Crown Copyright

The multi-role Panavia Tornado– of which some 992 aircraft were built in three variants (air defense, strike, and EW/recce) for the RAF, Luftwaffe/Marineflieger, Aeronautica Militare, and Royal Saudi Air Force– first flew in 1974 and was a Cold War icon. 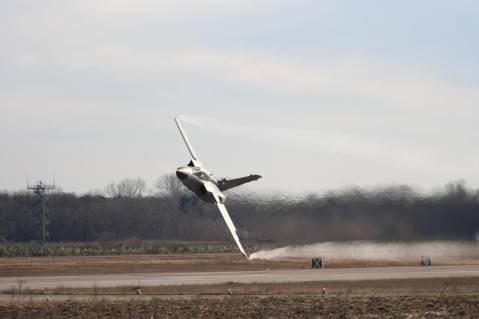 However, out of production since 1998, these sexy variable-sweep wing aircraft are now aging and, increasingly, being put to pasture.

The Germans have been whittling their fleet down since the Berlin Wall fell (and took the naval birds down almost immediately) while they currently plan to decommission the last strike units flying the bird in 2025. The Italians have 62 of 100 they received and are adding Typhoons and F35s to the force over the next decade to eliminate those. 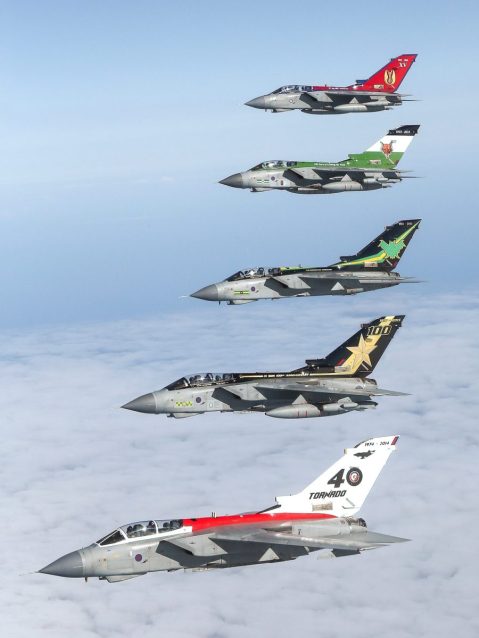 Five Tornado GR4 aircraft displaying commemorative paint scheme tail-art of the 40th anniversary of the type in RAF service, and the branch’s 100th birthday, last year. The Tornado Squadrons were based at RAF Marham and RAF Lossiemouth.

The RAF, in whose service the bird was nicknamed the “Tonka” for its ability to carry truckloads of bombs during the Gulf War and strikes over Bosnia, has completed their last combat missions for the big strike fighter, as it is on its last days with the Brits.

After almost 40 years serving the UK on military operations across the world, iconic RAF Tornado jets has returned home for the last time.

First entering service in 1979, the fast jets has been used in operations across the world, most recently bombarding Daesh to push the terrorist group back through Syria and Iraq.

The weapons capabilities of the soon-to-retire Tornados are now being delivered by RAF Typhoon jets, which will continue to take a leading role in the Coalition’s mission against Daesh. Under ‘Project Centurion’, worth £425million over the past three years, the Typhoon can now also launch the world-leading Meteor air-to-air missile, the Stormshadow deep strike cruise missile and the precision attack missile Brimstone.

These improved RAF Typhoon jets will form the backbone of the UK’s combat air fleet, alongside the recently introduced new fleet of F-35 Lighting jets over the coming years.

The last to fly the Tornado is likely to be the Royal Saudi Airforce, who still have 81 IDS variants in service, many of which are over Yemen at any given time. Although F-15S/SA Strike Eagles will likely replace them, don’t count on the Saudi’s to sideline these reliable sluggers until after the whole Yemen thing stops being a thing– which is no time soon.