Only a few weeks into 2020 and the domestic U.S. firearms market has seen a flood of new .22LR pistols from some of the biggest names in the business.

Last month saw the 42nd annual SHOT Show in Las Vegas where more than 2,600 exhibitors gathered from around the globe to display their freshest wares. When it came to rimfire handguns, there were lots of new faces in the aisles.

Bill Ruger started off his firearm company in 1949 with a .22LR semi-auto pistol that he designed in his garage as his Standard Model, based on an update to the Japanese Baby Nambu. This gun later morphed into the Mark I, then was updated thorough the years as the follow-on Mark II and III and had been extremely popular. One thing these guns all had in common, however, is that they were a bitch to clean, which is bad because rimfire leadhead ammo is super filthy.

Well, enter the new Mark IV which dropped from Ruger at 5 p.m. yesterday that has a one-button/one second break down without tools.

Mark IV Target has a shorter, but still very decent bull. I’ve already seen the aluminum framed version of this one for grabs for $350 ish street price..which would be an ideal camp/hiking gun

Between 1956 and 1986, the U.S. military ordered some 23,000~ rimfire semi-auto Mark I and Mark II pistols direct from the company for the use of service marksmanship teams.

Bill Ruger produced his Ruger Standard pistol in 1949, taking lessons from the Japanese Nambu and the Hi Standard .22. His neat little $37 pistol with its 9-shot magazine and 4.75-inch barrel turned out to be his first product and a great seller. So much so that by 1956, the U.S. military sought out a 6 7/8 inch heavy tapered barrel version for use by military shooting teams for practice and competition. The first order, for 4,600 of these guns in serial number range 75845 to 79945 was produced in that year. All were marked “U.S.” on the top right hand side of the receiver. 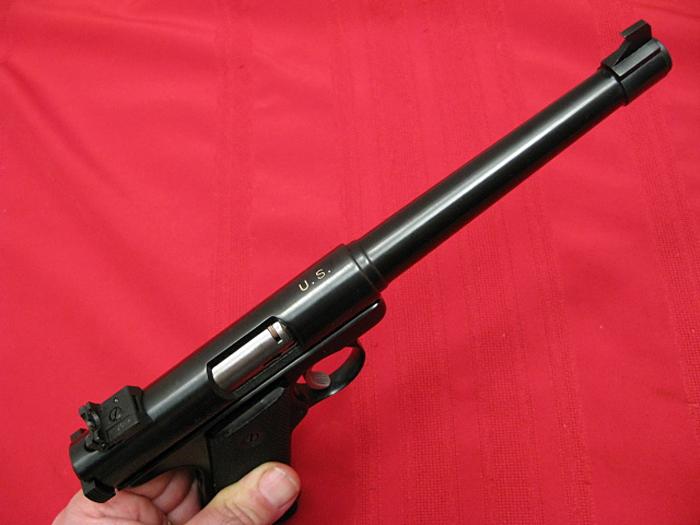 Now that doesn’t mean that all the guns in that range are GI pistols, as the factory made commercial guns right alongside those for the military. Over the next 15 years, at least another 1,500 guns were bought in a half dozen or more smaller contracts spread out from serial number 150036 to 331744 (about 1 percent of the production volume for that period).

For the rest of that story, check out my column at Ruger Talk