Rhyme of the McCampbell’s Mariner

The traditional New Year’s Day poem in the ship’s deck log at the stroke of midnight goes back generations in both the U.S. Navy and Coast Guard dating back to at least the 1920s.

Ens. Lauren Larar (USNA 2018), on watch aboard the Arleigh Burke-class guided-missile destroyer USS McCampbell (DDG 85), penned the first for the Navy this year as the ship had passed the International Date Line in the Pacific:

Steaming alone over waters no trouble,
McCAMPBELL is ready to fight on the double.
With lights burning brightly above on the mast,
All engines standard, 16 knots going fast.
We cut through the waters below deep and blue,
Our course is 200, degrees true.
Our position is in the sea to the east.
Our stomachs are full from the grand midrats feast.
1 alpha, 2 bravo are turning each shaft,
Alpha power units move rudders back aft.
Numbers 2 and 3 are the paralleled GTGs
Material Condition is Modified Z.
Computer assisted manual is the steering mode,
So we can maneuver per Rules of the Road.
CO’s in her chair, she’s up on the Bridge,
We’re still left of track, we’ll come right just a smidge.
TAO down in Combat, monitoring aircraft and chats,
And EOOW in Central, stay vigilant Hellcats!
The year that’s behind us was challenging, yes, indeed,
But Ready 85 will always succeed.
We’re mighty, we’re strong, we cannot be rattled
In the year that’s to come, we’ll stay RELENTLESS IN BATTLE!

Named for CAPT. David S. McCampbell, an Alabamian who went on to become a Medal of Honor and Navy Cross recipient who was the Navy’s leading ace in World War II (34 victories with VF-15 in a six-month period in 1944, flying F6F Hellcats, later serving as CAG of USS Essex), DDG-85 was built at Bath and commissioned in 2002. McCampbell is assigned to Destroyer Squadron 15 and forward-deployed to Yokosuka, Japan. Her skipper is Cmdr. Allison Christy.

WATERS NEAR GUAM (Mar. 07, 2016) The Arleigh Burke-Class guided-missile destroyer USS McCampbell (DDG-85) fires an MK-54 exercise torpedo (EXTORP) over the port side during an anti-submarine warfare (ASW) event as part of MULTI SAIL 2016. MULTI SAIL is a bilateral training exercise aimed at interoperability between the U.S. and Japanese forces. This exercise builds interoperability and benefits from realistic, shared training, enhancing our ability to work together to confront any contingency. McCampbell is on patrol in the 7th fleet of operations in support of security and stability in the Indo-Asia-Pacific. (U.S. Navy photo by Mass Communication Specialist 2nd Class Bryan Jackson/released.)

Long a staple of ASW training, exercise/recoverable torpedoes (extorps/rextorps) have been around for the Mk44, Mk46, Mk48, Mk50 and 54 variants and are typically the reworked warshot fish in which the explosive is replaced with an electronic signaling and guidance package that records the position of the device for data analysis after the exercise, and various signaling devices that help locate the torpedo in the water for recovery afterward.

They are pretty brightly marked, and colorful.

Almost always retrieved after tests or exercises, they are refurbished and shot again, sometimes dozens of times.

If not recovered by retrieval personnel for some reason, they have a ‘phone home’ marking on the casing should a random skin diver or fisherman chance upon one. 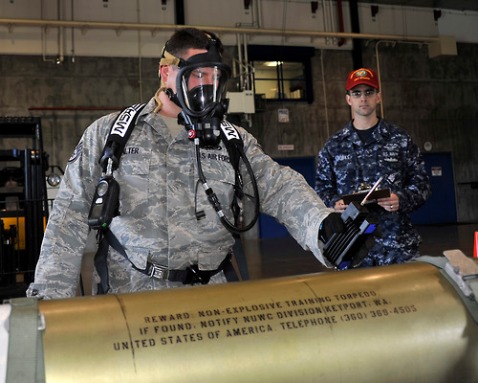