Posted on January 15, 2012 by laststandonzombieisland 3 comments

After years of the Tanker War, and the mining of the USS Samuel B Roberts by 1908-era Russian mines dropped by Iran, the 5th Fleet brought the heat.

On 18 April 1988, the U.S. Navy attacked the Iranians in the Gulf with three SAGS (surface action groups) supported aircraft from the carrier USS Enterprise (CVN-65), and her ASW/AAW escort USS Truxtun (CGN-35).

One SAG, consisting of the destroyers USS Merrill (DD 976) and USS Lynde McCormick (DDG 8), plus the amphibious transport dock USS Trenton (LPD-14) and its embarked Marine Air Ground Task Force of 4 Cobra gunships, a pair of Hueys and a pair of Sea Knight helicopters, was ordered to destroy the guns and other military facilities on the Sassan oil platform, which they did with a little good old naval gunfire, some Cobra gunships and a marine detachment. Two Iranian F-4s showed up but decided it was not worth it and did not get involved.

The second SAG, which was made up of the 26-year old 7930-ton guided missile cruiser Wainwright and frigates Simpson (Perry class) and Bagley (Knox class), attacked the Sirri oil platform. They toted a SEAL platoon with them but didnt have a chance to let the frogmen Spec Ops it up. Then Iran called in the big boys, The IS Joshan, a 154-foot French-made Iranian Combattante II Kaman-class fast attack craft, went after the USS Wainwright (CG-28) Surface Action Group Charlie. In an exchange of missiles and naval gunfire, the Joshan went to the bottom and the US ships sailed away. The hapless pair of Iranian F-4 Phantom fighters popped back up and made a run towards the Wainwright. One broke contact when lit up by the Wainwrights radar, the other got smoked by a pair of SM-2 surface to air missiles.

Iran responded by dispatching Swedish Boghammar speedboats to attack various merchant targets in the Persian Gulf, damaging three. This led to A-6E Intruders from USS Enterprise (CVN 65) dropping Rockeye cluster bombs like they were hotcakes on the speedboats, sinking one and damaging several others.

This caused the 1540-ton Iranian “frigate” IS Sahand (F74) to put to sea. They came near to the third US SAG, consisting of the destroyer Joseph Strauss, the Spruance class ‘gun-destroyer’ O’Brien, and the cute little Perry-class FFG the USS Jack Williams (soon to be decommissioned in Feb 2012). Quick action by a pair of A-6’s from Enterprise with Skipper laser guided bombs and the help of a Harpoon from the USS Joseph Strauss (DDG-16) end the Sahand to the bottom engulfed in flames. 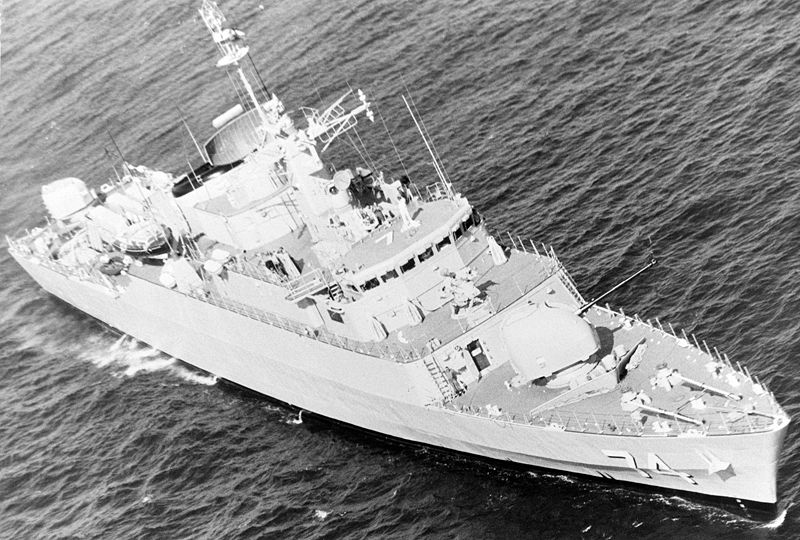 The IS Sahand before the USN got involved in its timeline, a nice cute British-built corvette-sized frigate

The IS Sahand with slight modifcations by the US Navy....

Looking to even the score the Iranian frigate IS Sabalan (F73), departed from its berth and fired a surface-to-air missile at several A-6s. This brought the beat down from the Intruders in the form of a Mark 82 laser-guided bomb right onto the Iranian ships smokestack, leaving it dead in the water.

This from a force of one CVN (who did not have to enter the Gulf with its escorting CGN), one old CG (Wainwright), four destroyers, 3 frigates, and a Vietnam-era LPD amphibious transport dock with embarked marines. A few hundred rounds of 76mm and 127mm naval shells, a half dozen Standard and Harpoon missiles, and a handful of laser-guided bombs were expended to cripple the Iranian Navy in the Gulf.

With a single 5-inch gun and a single Terrier missile launcher, the USS Wainwright was the pinch hitter in the Gulf In 1988.

The idea that the current US forces in the area is just as large as it was then, and has not been frozen in time since 1988 like the Iranians, is likely to be an even shorter fight. Sure, Iran has picked up a few midget subs, but the SH-60s in the fleet have been much more advanced than in 1988, mooting that point.